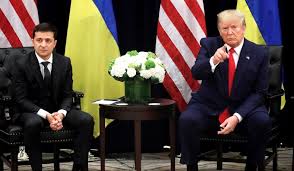 President Donald Trump and Ukrainian President Volodymyr Zelensky, at a joint press conference at the United Nations on Sept. 25.

A new Quinnipiac University poll shows support for impeachment and removing President Donald Trump from office has increased since the nation learned last week the president had asked the leader of Ukraine to investigate former Vice President Joe Biden, and his son Hunter.

The poll also showed Americans are split, 47 – 47 percent, on whether to remove Trump from office. In a similar poll released on  September 25, voters said that the president should NOT be impeached and removed 57 – 37 percent.

The gap also closed among independents, who clearly said that the president should not be impeached last week 58 – 34 percent, and today are only slightly opposed to impeachment at 50 – 42 percent.

Republicans feel much the same today as they did last week about impeachment; today, they say Trump should not be impeached 92 – 7 percent, and last week, they were opposed 95 – 4 percent.

“Following a week when House Democrats announced a formal impeachment inquiry into President Trump and more information emerged about the President’s actions regarding Ukraine, public opinion about impeachment is showing a shift,” said Quinnipiac University polling analyst Mary Snow. “The percentage of voters who think the President should be impeached and removed from office climbed.”

Snow also said “while voters overall are split on the question, there’s less hesitancy over the impeachment inquiry itself as more than half of voters approve of it.”

The results of the Quinnipiac poll track other national polls that also show support for an impeachment inquiry. Support for the U.S. House voting to impeach the president has risen since the White House released a rough transcript last week of the president’s July 25 call with Ukrainian President Volodymyr Zelensky.

“Despite the fact that the impeachment inquiry is just getting underway, half of American voters already believe that President Trump has done something wrong when it comes to his interactions with Ukraine’s leader,” Snow said. “ Of that group, there’s a virtually unanimous view he did something seriously wrong.”

The latest Quinnipiac poll was conducted from September 27 – 29, It surveyed 1,115 self-identified registered voters nationwide and had a margin of error of plus or minus 3.6 percentage points.