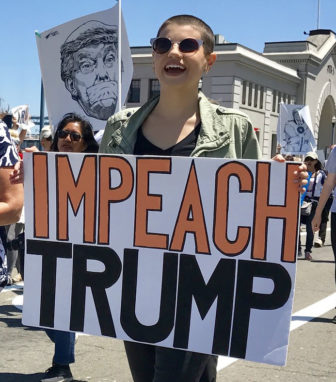 Another week of impeachment news failed to move registered voters, a new Quinnipiac University poll showed, with 45% saying President Trump should be impeached and removed from office and 49% opposed to the idea.

A similar Quinnipiac poll released last week indicated voters were evenly split, 47-47%, about Trump’s impeachment. Taking into consideration the poll’s margin for error, the latest results indicate public opinion has not moved on the issue, despite new charges against the president and Trump’s fierce offensive against allegations he abused his office for personal gain.

“Despite a week of blistering partisan exchanges, the sound and fury over whistle blowers and impeachment, the needle hardly moves,” said Quinnipiac University polling analyst Tim Malloy. “The country remains closely divided on whether to impeach and remove President Trump from office, and his base remains granite solid.”

A Quinnipiac poll released Sept. 25 showed that voters were clearly against impeachment, by a 37–57% margin.

While nearly half of voters polled did not back impeachment itself, a majority of voters, 53–43%, approved of the impeachment inquiry being conducted by the U.S. House of Representatives to determine whether impeachment charges should be brought against the president.

With the next Democratic primary debate scheduled for Oct. 15,  Massachusetts Sen. Elizabeth Warren and Biden both keep their “top of the pack” positions, the poll showed.

Warren received support from 29% of Democratic voters and independent voters who lean Democratic, while  Biden received 26% support from the same two groups. Vermont Sen. Bernie Sanders seems to be the only other Democratic candidate left in the mix with the two front-runners, receiving 16% of the vote. No other candidate topped 4%.

“Warren maintains her strength in the Democratic primary, which has been consistently growing since the start of her campaign,” Malloy said.

Quinnipiac  surveyed 1,483 self-identified registered voters nationwide from Oct. 4 to Oct. 7.  The poll had a margin of error of plus or minus 3.1 percentage points.