Lamont takes the city mayors’ calls. What will he deliver? 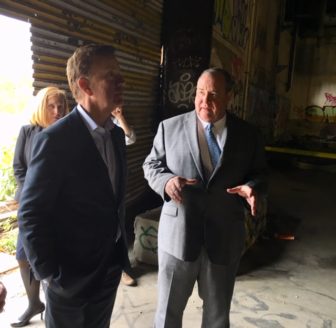 Gov. Ned Lamont listens to a pitch by Mayor Neil O’Leary in the abandoned Anamet factory. Behind them is Tamar Kotelchuck of the Boston Fed.

Waterbury — Neil M. O’Leary, a mayor coping with his city’s legacy of deindustrialization, guided Gov. Ned Lamont through a 17-acre industrial fixer-upper with the optimistic patter of a developer. He urged the governor to look past the weeds and graffiti-tagged bricks and see potential.

Lamont peered into the dim emptiness of an abandoned 200,000 square-foot factory, a building with good bones and high ceilings that O’Leary says will save it from the demolition crews that are slowly creating clean slates from brown fields for the next act in what once was America’s Brass City.

With $3 million awarded by the administration of Lamont’s predecessor, the city has been clearing the site, once home to a metal hose company, Anamet. At least another $2 million is needed to finish. O’Leary told the governor about another abandoned factory, one reclaimed and back on the tax rolls, providing jobs.

“One of our primary partners is and has always been for the last seven and a half years the state of Connecticut,” O’Leary told Lamont after they moved on to a food-processing facility under construction nearby, soon to become a neighborhood source of jobs and food. “But we have the results to show for the work.”

Uncertain is the extent to which the Lamont administration will be a partner to Waterbury or other cities. Nine months into his tenure, the governor’s urban policy is a work-in-progress, intertwined with the administration’s still-unfolding efforts to rebuild Connecticut’s transportation infrastructure and grow its economy.

“I don’t think he has what we would classify as a formal urban agenda. That doesn’t mean that he doesn’t have one,” said Sen. Gary Winfield, D-New Haven, who says he can see the building blocks of an urban policy, even if it’s not yet articulated. “This administration is still young.”

Urban leaders like O’Leary, Hartford Mayor Luke Bronin and Danbury Mayor Mark Boughton say they are encouraged by the governor’s accessibility, his early interest in urban issues and his repeated assertion that cities are key to the economy. But the test will be seeing those sentiments turn into concrete action.

They mayors say communication has not been a problem.

“He texts frequently. He calls. He checks in,” said O’Leary, a Democrat who also is the current chair of the Connecticut Conference of Municipalities 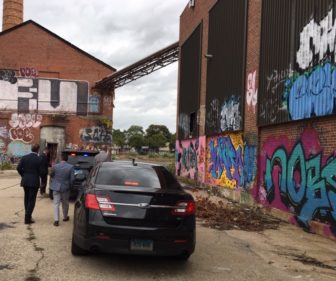 A tour of the Anamet brownfield site in Waterbury.

“In that sense, he has been excellent to deal with,” said Danbury Mayor Mark Boughton, a Republican and former state legislator who sought the GOP nomination for governor in the last three election cycles. “They are feeling their way, post the first session.”

Money has not yet followed the conversations, however.

The legislature’s Finance, Revenue and Bonding Committee recommended $30 million in bonding for brownfield remediation in the fiscal year that began July 1, but governor has refused to move forward on a bond package.

Lamont wants to first resolve how much of the state’s current credit capacity will be needed to finance CT 2030, a 10-year transportation infrastructure plan he expects to propose in the next week or so. It is a follow up to Lamont’s signal failure — a proposal for a comprehensive system of highway tolls that did come to a vote in either chamber.

“That’s kind of sucked the air out of  the room,” Boughton said. “What they have to do is get that sense of equilibrium with the legislative branch. They are not there yet.”

The administration recently convened a working group on transit-oriented development in Fairfield County, and Lamont signed a bill that effectively makes federally designated opportunity zones, most of which are urban, a priority for state assistance.

“We are going to need to focus our resources on these areas,” said David Lehman, the governor’s economic adviser and his commissioner of economic and community development. Lehman has been working to recast the state’s economic aid programs away from corporate grants and toward investment in infrastructure.

In Hartford, the quasi-public Capitol Region Development Authority has been a catalyst for an apartment building boom that has transformed long-vacant buildings into downtown housing, a key ingredient for companies that see livable cities as key to attracting millennials and younger workers. Every dollar in public money the authority has provided in low-cost financing has leveraged four or five in private capital.

Bronin said the mayors know the governor recognizes that vibrant cities are necessary to economic growth.

Last week, Lamont told a legislative panel aimed at retaining young workers that Amazon is typical of what new-economy companies are demanding.

Infosys, a tech company, has opened a regional hub in downtown Hartford to serve its customers in insurance, health and advanced manufacturing, and Stanley Black & Decker is sponsoring a downtown manufacturing “accelerator,” a program run with Techstars that mentors and helps find funding for startups from around the world.

“For the first time in a long time we are seeing some forward momentum, but we have to make sure we are not taking our foot off the gas,” said Bronin, who says the city is beginning to prove itself as a magnet for technology. “But it may be an opportunity that may be fleeting.”

Last week, Lamont visited the Anamet site as part of a tour of a census tract in Waterbury’s South End that will be a laboratory of sorts. It was chosen to participate in the Working Cities Challenge, a grant competition organized and partly funded by the Federal Reserve Bank of Boston.

Waterbury, Danbury, East Hartford, Hartford and Middletown each were given $450,000 grants.

In Waterbury, where the grant was more than doubled by private philanthropy, the focus is on census tract 3505. It is home to 2,439 people, more than three-quarters Hispanic and many foreign-born. Unemployment is 23%, four times the city’s jobless rate.

Victor Lopez Jr., the executive director of the Hispanic Coalition of Greater Waterbury, told Lamont that some of the Working Cities grant is being used to provide English classes in the neighborhood, to be followed by training as certified nurses’ assistants. 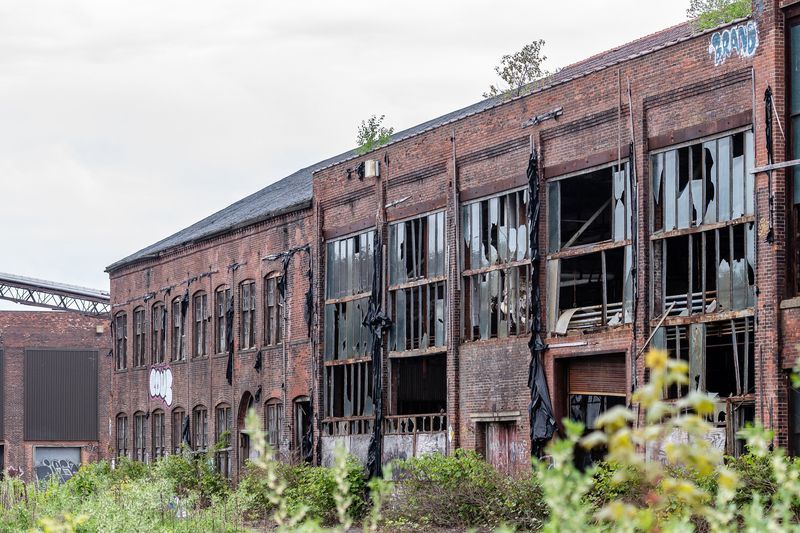 The 10,736 healthcare and social assistance jobs in Waterbury are triple what’s left of the manufacturing job base, which once exceeded 25,000 jobs. The biggest employers in Waterbury are the city, its two hospitals, a community college and an anti-poverty agency, New Opportunities.

Lamont was accompanied on the tour by Tamar Kotelchuck of the Boston Federal Reserve Bank and Jim Smith, the retired chief executive of Webster Bank. Smith is co-chair of the  Connecticut Economic Resource Center, a non-profit engaged in a new public-private partnership with the Department of Economic and Community Development.

They stopped outside a 6,000 square-foot food-processing facility under construction on a former brownfield site. It will be home to Brass City Harvest, a non-profit that helps small farms meet inspection standards necessary to sell to grocery chains.

“The majority of people who will work here will walk here,” O’Leary said.

The project is being built with help from city, state and federal agencies.

O’Leary told Lamont that Waterbury has taken ownership of brownfield properties, a step that helps the city coordinate the cleanup and return to the market. It is an approach that has won national notice by the Environmental Protection Agency.

“You put the skin in the game, just like you did with the Boston Fed,” Lamont said.

“We are not afraid to put our skin in the game, governor,” O’Leary responded.

The city now collects annual rents of $1 million on a factory complex it redeveloped in the North End, O’Leary said.

Smith said, “One of the good things about this is there is a demonstrable return on investment. You want to know what good did the money do.”

At the governor’s side, Smith hastened to add, “But there is a return.”