Lamont would spend $5 billion on Metro-North,

Gov. Ned Lamont dropped a few more breadcrumbs Wednesday on the path he hopes lawmakers are following to his eventual presentation of CT 2030, a plan for spending about $20 billion over the next decade to speed Metro-North trains and ease highway congestion.

The administration gave the Wall Street Journal, a favorite of many commuters who ride the rails, these tidbits: $5 billion will be spent on Metro-North to buy 100 rail cars, replace three century-old bridges and add express service on the Waterbury line.

The new talking point aimed at Fairfield County lawmakers: CT 2030 could produce the first improvements in Metro-North commuter times in a generation, perhaps saving as much as 15 minutes on the ride from New Haven into Grand Central.

Since early September, when his chief of staff shared a basic outline of Lamont’s transportation reboot, the governor has dropped a detail here and a detail there, all while his staff continue to hone the plan and crunch the numbers on cost and financing.

So, when will the final reveal come?

“We’re talking to the legislative leadership every day,” Lamont told reporters. “I just don’t want to get ahead of myself. I want to make sure when we roll this out we have as many people on board as we can.”

Lamont said the administration is making changes based on feedback from lawmakers.

“We briefed everybody, and we’re going to refine that proposal yet again,” Lamont said. 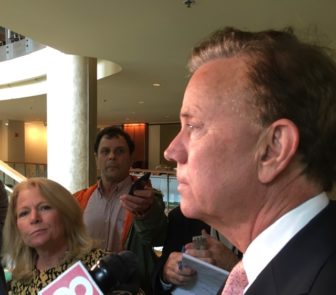 Lamont is visiting New York City on Thursday to meet with the governors of New York, New Jersey and Pennsylvania to talk about a common regulatory structure for vaping and, if it is ever legalized in Connecticut, recreational marijuana.

Then attention will return to transportation.

The administration fumbled its initial proposal in February, publishing it in an op-ed that outlined a transportation revenue plan built on a comprehensive system of highway tolls on the Merritt Parkway and Interstates 84, 91 and 95. It fell flat.

Democratic legislative leaders refused to schedule a vote on his plan in either chamber.

The new strategy is to make the case for restoring Connecticut’s highways, bridges and rail system to a state of good repair, then talk about the new revenue necessary to make the plan a reality. Lamont now talks about “user fees,” which most likely will include tolls on a dozen bridges.

Taxes on motor fuels and oil companies raise $806 million a year for the special transportation fund, about half of what is necessary. The rest comes from sales taxes, motor vehicle receipts and fees.

On Sept. 20, offices from the Build America Bureau of the U.S. Department of Transportation briefed leaders on what they say is a flexible menu of available low-cost credit — less than 2% for highway loans that come with a repayment period of 35 years.

“We have to get in line for it,” Lamont said Wednesday. “They don’t just automatically give it to us.”

Lamont said the state also must identify a revenue stream to pay for it.