Lamont asks for ‘profile-in-courage’ from GOP on transportation

Final legislative briefings are this week 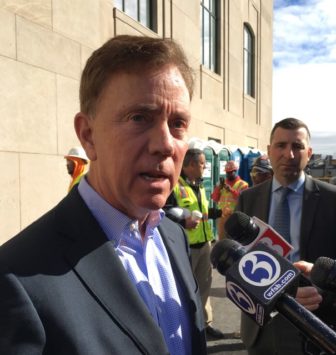 Gov. Ned Lamont told reporters Monday he is getting “final feedback” this week from legislative leaders before releasing his second try at a transportation infrastructure plan, then he challenged House Republican skeptics to reconsider their opposition to tolls or any other form of new transportation revenue.

The Lamont administration has been engaged in a give-and-take with Senate Republicans over what is expected to be a 10-year, $20 billion plan, but House Minority Leader Themis Klarides, R-Derby, has doubled down on her caucus’s opposition to any tolls and, possibly, any new revenue sources.

“It’s going to take a profile in courage,” Lamont said, when asked about the chances of getting House GOP support.

“So, his definition of a profile in courage is if somebody agrees with him?” Klarides replied.

Lamont has greatly scaled back his original plan, which called for a comprehensive system of electronic highway tolls on the Merritt Parkway and Interstates 84, 91 and 95 that he predicted could raise about $800 million annually. Without new revenue, Lamont said, the state’s special transportation fund is projected to run in the red in the next four years.

“It’s going to take a profile in courage.”

The administration’s revised plan calls for tolls only on select bridges, with a relatively modest  charge for passenger vehicles and a premium for trucks, according to officials who have been briefed.

Lamont said he expected to have “some pretty good news by the end of the week,” but administration officials have taken to heart the advice of House Democrats to avoid releasing the plan on a Friday. Supporters say the plan should be released early in the work week, with a strategy for promoting it.

The original plan was presented to the public in an op-ed piece published on a holiday weekend in February. In recent weeks, Lamont and his staff have been briefing legislators and stakeholders outside government.

“So, his definition of a profile in courage is if somebody agrees with him?”

“The governor has done a good job reaching out to external validators,” said Rep. Roland J. Lemar, D-New Haven, the co-chair of the Transportation Committee. “He is taking his lumps by going to them, hearing their thoughts on why it failed last time.”

Ryan Drajewicz, the governor’s chief of staff, said the rollout this time will be deliberate.

“This will be done in close and careful collaboration with the legislative leadership and chairs” of the relevant committees, Drajewicz said, adding, “And preferably with both sides of the aisle.”

Klarides was briefed by the administration last week on a plan that outlines projects necessary to keep the state’s highway and transit system in a state of good repair, as well as making enhancements to improve commuting times by speeding rail and eliminating highway bottlenecks. It would limit tolls and rely in part on low-cost financing from the federal government.

“We have been open-minded to the other parts, the non-tolls parts,” Klarides said. 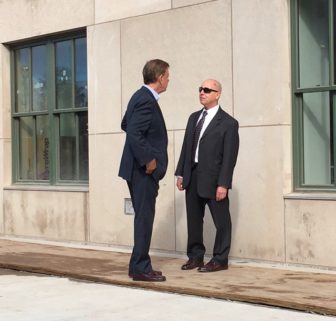 Lamont chatted with Don Shubert, the head of a construction trade group that is lobbying for an infrastructure plan, before talking to reporters.

But the administration has not made the case, at least in Klarides’ view, that new revenue is necessary to keep the special transportation fund solvent, nor does she agree that everything on Lamont’s priority list must be tackled immediately.

In a telephone interview, Klarides initially ruled out any new transportation revenue, then reconsidered and said, “I shouldn’t say that. We have to dig very deep in this process.”

Klarides suggested the governor’s plan is too ambitious.

“Let’s put a reasonable package of projects together,” Klarides said. “Let’s just get real for a change. Let’s stop living in a fantasy world, where you do everything at once.”

When Lamont proposed his original tolls plan, Republicans countered with a call to redirect about $700 million of the state’s current general-obligation bonds for transportation, an approach that Lamont says would rob other needs of necessary funding and fail to provide a stable source of revenue.

The Lamont administration is seeking low-cost federal financing that requires a dedicated source of repayment, and the governor said Klarides and others must recognize that tolls are the only way to guarantee that out-of-state drivers who traverse Connecticut highways will pay for their upkeep.

Lamont said without new revenue sources, Connecticut would have to use bonding — borrowed money — to pay the debt service on the federal loans, “putting it on the credit card of the next generation.”

“If that’s the only deal she’ll consider, I’d like to think a couple of other Republicans may stand up and challenge that and say, ‘We have a better plan, a plan where out-of-staters pay for 40 percent of it, a plan that is limited, but a plan that fixes our transportation system and fixes our special transportation fund, which goes under water in the next four of five years,’ ” Lamont said.

Senate Minority Leader Len Fasano, R-North Haven, met a week ago with the governor and other administration officials to talk about the scope of what Lamont would like to do, as well as means of financing. He posed a series of issues and concerns, and the administration has been responding.

“You have to appreciate the fact he is trying his best to sort out some of the issues,” Fasano said.