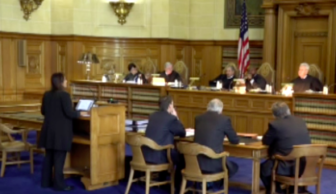 The Connecticut Supreme Court declined Monday to postpone Tuesday’s mayoral election in Bridgeport over allegations of absentee ballot fraud in the Democratic primary, while leaving open the possibility the court might use the case to eventually clarify standards for challenging suspect election results.

But the immediate takeaway from hastily scheduled oral arguments and an hour of deliberations by the court was that Mayor Joseph P. Ganim’s narrow victory over state Sen. Marilyn Moore in the September primary should stand and the election go forward Tuesday with Ganim on the ballot and Moore as a write-in candidate.

The result was hardly a surprise as courts generally are reluctant to intrude in elections in the absence of overwhelming evidence and clear legal standards, but Chief Justice Richard A. Robinson and others expressed discomfit at the prospect that fraud could occur so long as there was no clear evidence it changed the result.

Three Bridgeport voters claimed in a lawsuit that Ganim’s narrow victory over Moore was the product of fraud: Moore beat Ganim at the polls, 4,721 to 4,337, while Ganim’s 967-to-313 advantage in the absentees produced a 270-vote win. Moore was not a plaintiff, saying her campaign could not afford a legal challenge.

Superior Court Judge Barry K. Stevens dismissed the case, ruling the three voters had no legal standing to sue, as they were not “aggrieved electors” under state law. In his 20-page ruling, Stevens wrote that to prevail the plaintiffs also would have to show that any wrongdoing resulted in enough votes to change the result.

The plaintiffs did not explicitly ask the high court to stop the election, but their pleas for the court to find they had legal standing opened the door for the justices to postpone a general election. Several justices suggested that the case could be moot, at least as it applies to Ganim and Moore, after the election Tuesday. 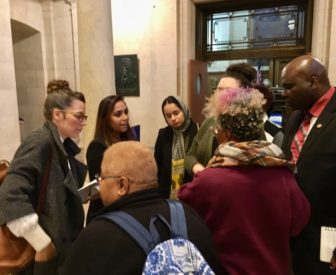 Prerna Rao, second from left, consults with clients after the arguments.

“We’re all in uncharted territory as far as the case law,” said James J. Healy, a lawyer for the city.

Robinson said he found “somewhat unsatisfying” the idea that evidence of systemic fraud would not be sufficient to invalidate an election if the fraud produced significant votes, but fell one short of tilting the plurality from one candidate to another.

“You game the system all you want so long as you don’t hit that magic number,” Robinson said. “And that is perfectly OK? Doesn’t that sound horrible in a democracy?”

“It’s not perfectly OK. And what happens here is you have to have proof there are actual and serious violations,” Healy replied. “We don’t have evidence of that here.”

Prerna Rao, the lawyer who brought the challenge, said she was not surprised the court declined to stop the election Tuesday, but she was pleased the Supreme Court would continue to review the question of standing and potentially provided a clearer path for future challenges of questionable elections.

“It’s great for electors who want to bring issues like this to light in the future and want to have a public forum to be able to do it,” she said. If the court rules her clients have standing, “It’s become actionable.”

Lawyers for the city declined to comment after the hearing.

Neither Moore nor Ganim were at the hearing.

Moore later said she was untroubled by the decision. Her campaign is ready to instruct voters at the polls how to cast a write-in vote.

“I’m not mad at anybody,” she said. “I believe in moving forward.”

Ganim said the trial judge wrote a thorough decision, and he was glad the Supreme Court declined to interfere in the election.

“I’m glad the Supreme Court heard it and recognized that this election should go forward and the people of Bridgeport should be heard,” Ganim said.