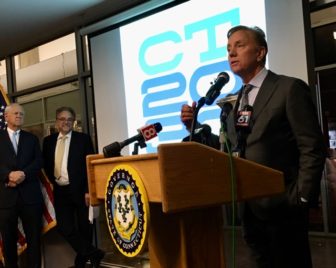 Gov. Ned Lamont opened a campaign Thursday for passage of a $21 billion transportation plan with a user-friendly web site and the enthusiastic backing of labor and business, allies he will need to overcome a wariness among lawmakers about embracing an unpopular governor and his insistence that limited highway tolling no longer can be avoided in Connecticut.

Lamont, a Democratic businessman from Fairfield County, where sclerotic highways and a geriatric commuter rail system are choking economic growth, begins with little political capital: His polling is poor, antipathy to tolls was a factor in some Republican municipal wins Tuesday, and Senate Democratic leaders have yet to show an interest in helping him.

The governor acknowledged to reporters that a major challenge is overcoming public skepticism about the need for $320 million in new annual revenue from 14 tolled bridges. He also acknowledged mistrust that government would use the money solely for transportation, even if federal law requires any interstate highway tolls to be used on those systems.

“My job is to tell people the truth and keep my word. I think they can count on it,” Lamont said. But Lamont campaigned last year on a promise to seek tolls only on trucks, a promise unmet by his original transportation plan in February and the one published Thursday.

GOP lawmakers: Why should we?

Lamont addressed a transportation forum Thursday morning, recorded a pitch for his 10-year plan on WFSB’s “Face the State to be aired Sunday, and then formally unveiled what he is calling CT2030 at a late-afternoon press conference in Hartford. He was backed by allies who pointedly challenged legislators to support the governor.

“I don’t want this thing to be a partisan issue, OK?” Lamont said at the morning forum in Farmington. “A lot of Republicans will say, ‘No tolls. No tolls.’ They’ve got a great political issue. And, frankly, a lot of Democrats are scared of their own shadow and hope this issue goes away.”

Details of his plans have dribbled out over the past weeks as he briefed lawmakers and others. The Connecticut Mirror published a detailed account Wednesday after obtaining copies of the plan, an executive summary and a financial pro-forma. The question now is whether Lamont can sell it nine months after the rollout of his original proposal, which never came to a vote.

His immediate political challenge is in the Senate, where Democrats have a 22-14 majority after two years of sharing power with Republicans in an evenly divided chamber. Fearful of losses in 2020 that could cost them the majority again, Democrats want the political cover of at least some Republican support.

“Where is the profile in courage when you have Senate leadership saying, ‘We are not going to support this plan unless a Republican supports it?’ ” asked Rep. Vincent J. Candelora, R-North Branford, the deputy House GOP leader. “How about you vote for it or against it? Why are you hitching your wagon to the Republicans? It’s a total cop out.”

House Majority Leader Matt Ritter, D-Hartford, said Republicans are making their own political calculation that reflexively opposing any plan with tolls will strengthen them in 2020. But Ritter says he believes that Fairfield County Republicans are mistaken if they think CT2030 is bad politics, given the benefits it would produce for their commuting constituents.

The plan would eliminate chokepoints on I-95 between New Haven and Greenwich, replace rail bridges that are more than 100 years old, expand Metro-North service and purchase 132 rail cars and 30 locomotives that officials say would be cleaner, faster and more reliable.

Without GOP votes, the best-case scenario for passage appears to be an 18-18 tie that would be broken by the presiding officer, Lt. Gov. Susan Bysiewicz. But Lamont has no commitment from legislative leaders to return in a special session on transportation, and some legislators who asked to not be quoted by name say they doubt one will be called.

Success or failure may rest with the ability of Lamont’s allies in business to lobby Republicans, especially in Fairfield County, and those in labor to work on reluctant Democrats.

Lamont met for least 90 minutes last week with 21 chief executives at a session with the Business Council of Fairfield County. All 21 endorsed the plan and offered their support, said Joe McGee, the council’s vice president.

On Thursday, Lamont was joined by Sal Luciano, the president of the Connecticut AFL-CIO, and H. Darrell Harvey, the co-leader of the Ashworth Company, a national commercial real-estate company based in Stamford. Luciano backed Lamont for governor, while Harvey supported a Republican, David Stemerman.

“Fixing our infrastructure is not a partisan issue,” Luciano said. “That is why labor is standing with the governor and the business community today to call upon the legislature to summon the political courage to get this done.”

“This has to be bipartisan. It’s very hard watching politics play a role on this issue.”

“This has to be bipartisan. It’s very hard watching politics play a role on this issue,” Harvey said. “Let’s play politics on other stuff beside our foundation of our state, the infrastructure of our state.”

House Republicans have not wavered in their opposition to tolls, even as Lamont has downsized the original tolling plan from 50 or so gantries to 14, cutting the projected tolling revenue from $740 million to $320 million.

Senate Republican leader Len Fasano of North Haven complimented the administration on producing a vision of what needs to be done, but he remains unconvinced that revenue from tolls or any other source are necessary, even if the Special Transportation Fund is projected to be insolvent in less than five years.

The governor’s pitch for tolls is tied to Connecticut’s courtship of the U.S. Department of Transportation’s Build America Bureau, a central clearing house for low-cost financing programs for rail and highways: RRIF, the Railroad Rehabilitation and Financing program and TIFIA, the Transportation Infrastructure Financing and Innovation Act.

To qualify for loans far cheaper than available in the bond markets, the state needs a dedicated revenue source. Lamont is proposing user fees, otherwise known as tolls, on 14 highway bridge projects. They would vary in price, ranging from 50 cents to $1, depending on the cost of the project, said Joseph J. Giulietti, the transportation commissioner. Connecticut EZ pass users would get a 20 percent discount.

“All the money from the user fee goes to pay off the federal bonds, and it’s historically cheap money, 2% or less,” Lamont said.

But Lamont muddied the rationale for the tolls in answering questions from reporters. He first said tolls were strictly tied to the TIFIA loans, and he left open the possibility that tolls could come off the highways once the loans are repaid, even if that was unlikely.

“Right now, the tolls are tied to the TIFIA loans,” Lamont said. “The TIFIA loans are 27 years. By contract, every dime from that tolls revenue has to go to pay off that TIFIA loan.” But the legislation he will propose to the legislature would not make the implementation of tolls contingent on the federal financing.

“That doesn’t make any sense,” Lamont said. “I’ve still got a Special Transportation Fund that is going bankrupt in five years. I still have bridges that are in an incredible state of disrepair. To me, to say I’m going to walk away from everything unless I get exactly what I want from the federal Department of Transportation, that doesn’t solve the problem.”

Lamont conceded he cannot guarantee federal financing, though the Build America Bureau has been encouraging, and its director came to Connecticut to personally brief lawmakers on its financing programs. 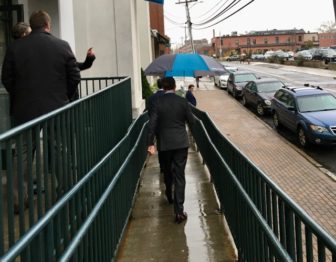 ”All I can tell you is I guarantee you we’re not going to get any of this money unless we get our best foot forward, and show how we’re going to pay for it, show what the design plan is and get first in line,” Lamont said.

Lamont’s press conference was at reSET Social Enterprises Trust, a business incubator. He spoke in front of a glass wall, a briefing shadowed by a woman wearing a knit cap with the message, “NO TOLLS.”

The Motor Transport Association of Connecticut, which represents the trucking industry, quickly reiterating its opposition to highway tolls, even a downsized plan.

“MTAC remains opposed to tolling existing highway capacity, whether that means current highway lanes, or specific bridges,” said Joe Sculley, its president. “As the trucking industry already pays the diesel tax, the Petroleum Gross Receipts Tax, and vehicle registration fees, tolls would be a fourth tax for the privilege of using what we have already paid for.”