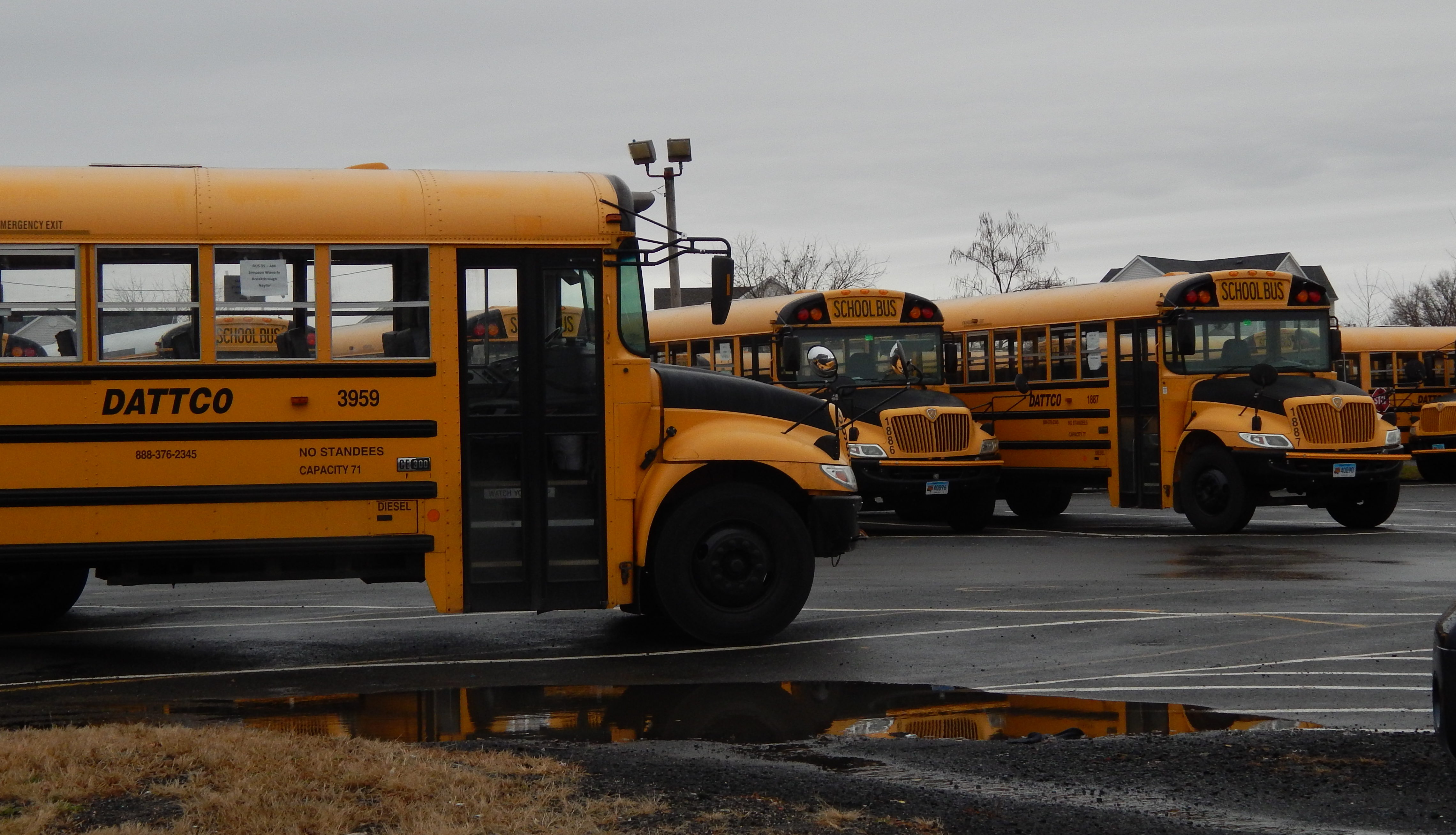 School buses in the North End of Hartford

A state auditors’ report issued Thursday has revealed blind spots and other significant shortcomings in  criminal background checks for school bus drivers that could place children in jeopardy.

The auditors’ report found that periodic Department of Motor Vehicles background checks on drivers already authorized to transport children are incomplete and that DMV  does not know whether school bus companies check to see if a current driver has been disqualified because of a recent criminal offense or motor vehicle violation.

In addition, the auditors found that the criminal history information systems at the Department of of Emergency Services and Public Protection, or DESPP, are inadequate and increase the risk of errors. Auditors also found that police departments do not provide felony arrest notifications to DMV as required.

“If an ‘endorsed’ driver commits certain offenses, DMV must issue a suspension,” said State Auditor John C. Geragosian, “so that goes to the issue, if the police department doesn’t tell DMV, is there a blind spot in the system?

“Whenever we are dealing with the transportation of children, we want to make sure they are healthy and safe,” Geragosian added. “It’s important that the agencies that share information do that in a timely fashion to ensure that the DMV and [DESPP] know when drivers may have committed offenses that could put children at risk.”

The almost 60-page report covered data from 2015 to 2017 and noted that during that time, there were more than 22,000 individuals with the DMV license endorsement, as it is called, to transport school children. It said that DMV receives about 4,600 applications for the endorsement each year and approves an average of 4,100.

Brian Foley, public information officer for DESPP, said the agency is in the process of modernizing its system.

“So much of the way things have been handled are the result of an antiquated system that’s been in place since this process started,” he said. “What we are trying to do in the modernization process is eliminate the potential for human error while increasing efficiency and improving costs.”

Foley said he does not believe children are at risk of having bus drivers with criminal histories, but said “we’re always looking for ways to improve and make the system safer for everybody.”

Geragosian said he didn’t know of any specific examples of bus drivers with criminal backgrounds driving school children, but couldn’t rule it out.

“Obviously if you have blind spots in your process that can happen,” he said.

Gerogosian said the report was focused on “process.”

“It’s a performance audit,” Geragosian said. “You want to have as seamless a process as you can for law enforcement.”

A DMV spokeswoman said no one was available to comment on the report Thursday afternoon.

The auditors’ report says that while DESPP has “fully embraced replacing its current background check information systems,” it should have initiated that upgrade sooner.

Both the automated fingerprint identification system and the computerized criminal history data system used by DESPP to conduct criminal background checks “have significant hardware and software deficiencies that pose potential risks to the timeliness and integrity of those background checks,” the report said.

It noted that in 2016, a DESPP document summarizing the issue said the replacement of the fingerprint system has reached “the emergency stage.”

The auditors said that examples of the fingerprint and criminal history data system deficiencies include inadequate hardware maintenance by the vendor, “causing minutiae on scanned fingerprint cards that could alter their integrity” as well as “system outages and bugs interfering with efficiency and effectiveness.”

The report says that the background check process is at risk “due to its reliance on antiquated and unsupported information systems prone to delays and outages, and a lack of proper oversight. Also, the current system’s manual processing of original records increases the chance for errors and delays to occur, potentially resulting in inadequate or erroneous background check information.”

The report also found that the DESPP stores original fingerprint cards, which have not been electronically captured in the automated fingerprint database, in a room that flooded in 2016, causing water damage to an estimated 50,000 cards, or 15% of the cards.

“DESPP estimates approximately 2% of the cards were irreparably damaged by the flood, and is working to physically separate the estimated 500-1,000 cards still stuck together,” the report said.

The auditors recommended that DESPP and other state agencies expedite the implementation of a new computer system and better protect the original fingerprint cards from possible water damage.

And while DMV does check the DESPP criminal database and its own driver suspension information for follow-up reviews for current school bus drivers,  the auditors found it does not check with the Department of Children and Families for abuse and neglect substantiations or with the FBI national crime history database for criminal activity subsequent to the initial background check.

As a result, the report said, the current process “does not identify federal or out-of-state arrests and convictions or abuse and neglect substantiations” beyond the initial check during the application process.

Consequently, the report said, DMV may not be disqualifying current drivers who should be prohibited from transporting students.

“This could expose school children to unnecessary risks,” the report said.

However, the report said that DMV officials said that “it would be time-consuming to conduct subsequent FBI and DCF checks, as it would add to an already overburdened system.”

The auditors recommended that background checks for drivers who already hold the endorsement to drive school children should include periodic updates from the federal and out-of-state criminal databases and from DCF’s child abuse and neglect registry.

DMV responded in the report that the agency will investigate the amount of time involved to do the checks with DCF for people who have already received the driving endorsement. The agency said this would require statutory change and FBI approval to periodically  check national crime databases on drivers who currently hold endorsements to drive school buses.

The report also said that police departments are not reporting felony arrests to DMV as required under laws that state  an arresting officer or department must notify DMV within 48 hours of a felony arrest of anyone with a “public passenger endorsement.” Some arrests are reported in the Connecticut Information Sharing System, or CISS, a comprehensive statewide criminal justice information technology system.

However, it said that only 12 of the state’s 93 municipal police departments share their arrest information with that system. In addition, the report said, CISS does not include arrest information from the state police and 58 other agencies with arrest powers.

The report said that DMV informed the auditors that “due to the absence of official notifications, it sometimes relies on news reports to learn of felony arrests involving” people with licenses endorsed to drive school children.

Without complete knowledge of felony arrests, “DMV cannot assess the criminal history of endorsement holders,” the report said, which means “the safety of school children is potentially in jeopardy.”

The report also examined whether school bus companies regularly check the DMV list of drivers who have had their license or endorsement withdrawn, suspended or revoked. The carriers are required to do this at least twice a month and to immediately prohibit any employee appearing on the list from driving a school transportation vehicle.

The report said that DMV is not confident that it has identified all the carriers.

“Although the requirement for carriers to check the list has been in place for years,” the report said, “DMV lacks a comprehensive central registry of carriers.”