Best of 2019: Susan Bysiewicz and the never-ending campaign 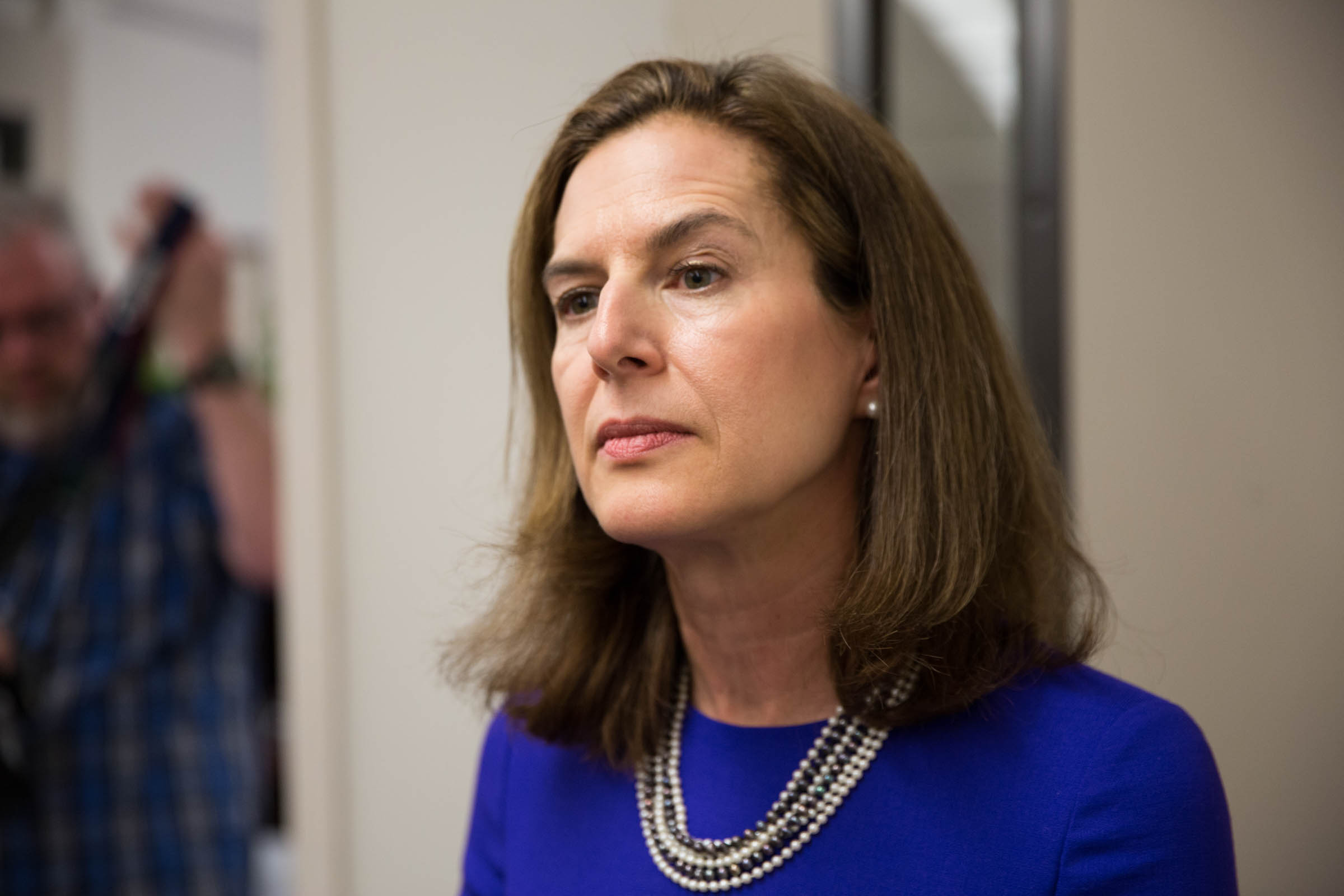 Note: This story was originally published on August 26, 2019.

With little public notice, Lt. Gov. Susan Bysiewicz speaks to as many as a half-dozen audiences some days, prompting the inevitable whispers. Is she running already? Is she crowding her boss, Gov. Ned Lamont, who recently has indicated to allies he is intent on keeping his options open for 2022?

In eight months as lieutenant governor, an ill-defined office that is more often a dead end than springboard in Connecticut politics, Bysiewicz has assembled a savvy staff and carved out roles that put her in daily contact with a broad range of interests, making her the face of the administration in some corners of the state.

Even if ambition and politics go hand in hand, the tag “ambitious” has been pinned on the 57-year-old Bysiewicz like a scarlet letter over the course of three decades in public life. It infuriates friends, who see a sexist double-standard in the suspicions and gibes directed at Bysiewicz, who was acting governor for the past two weeks while Lamont uneventfully vacationed in Maine.

There was no coup.

Senior aides to the governor say Lamont and Bysiewicz have a good working relationship, one honed in biweekly meetings between the two officials and their chiefs of staff. One said  Bysiewicz’s daily regimen of political outreach is no surprise. It was her routine during her 12 years as secretary of the state — and her eight years in the private sector.

“It’s just literally who she is. It’s in her DNA. I don’t think she knows any other way,” said Ryan Drajewicz, Lamont’s chief of staff. “People will draw their own conclusions that it’s part of some grand agenda. Susan’s got one speed, and that’s full throttle. But it’s thoughtful.”

When Lamont struck a deal with Bysiewicz to form a ticket days before the Democratic nominating convention last year, insiders joked that Lamont would need a food taster, a particularly nasty crack. Her friends says she well knows her reputation and does her best to ignore it.

“Susan’s got one speed, and that’s full throttle. But it’s thoughtful.”

Bysiewicz rolled her eyes last week at a question about the potential political benefits of her travels as lieutenant governor.

“First of all, we look at ourselves as part of a team,” Bysiewicz said. “Our success is our team’s success, and we know that.”

As chair of the Connecticut Complete Count Committee, Bysiewicz is the administration’s point person on working with local officials and grass-roots groups to ensure an accurate 2020 Census in the cities and inner-ring suburbs with hard-to-count neighborhoods. It is a task that regularly gives Bysiewicz a reason to stay in close contact with Democratic constituencies. 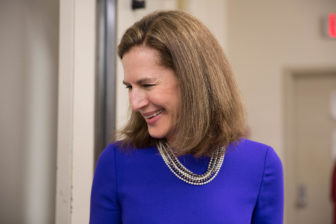 Bysiewicz has embraced a few, key issues, including women’s issues and the upcoming census.

She also is chair of the Governor’s Council on Women and Girls, a platform for talking about pay equity and a venue for getting to know to a range of women active in politics and public policy. In July, she named a steering committee of 101 members, posing for a group photo in the atrium of the Legislative Office Building.

“I always say women’s issues are economic issues. That is a huge focus for me,” she said.

Bysiewicz regularly conducts roundtable conversations on opioid abuse, making sure to invite local lawmakers, then sends handwritten notes to those who attend. And she has insisted on playing a role in economic development, acting as an administration ambassador to small businesses and major industries.

One of her stops last week was a meeting at the Delamar hotel in Greenwich with Bruce McGuire, the head of the Connecticut Hedge Fund Association, and Caitline Brodie of the Carlyle Group. That morning, she visited small businesses in Milford with Mayor Ben Blake.

Next month,  she plans to go to New York with David Lehman, the governor’s economic adviser, for a series of meetings with representatives of Connecticut’s top six foreign trading partners.

Her predecessor, Wyman, said, “Susan is a strong woman who is going to take a role as far as she can take it — and there is nothing wrong with that.”

Wyman chose not to run after Malloy decided two terms were enough. She would have had to defend the record of an unpopular governor, a reminder that LGs and vice presidents can carry the baggage of their previous administrations with few advantages. Lamont so far is scoring poorly in the polls.

“It could work for you and against you,” said Liz Kurantowicz, a Republican operative. “You are inextricably linked to the good, the bad and the ugly of the incumbent administration, and so far this one does not seem to be starting out on a positive note.”

For someone with a reputation for toughness and ambition, Bysiewicz twice has abandoned campaigns for governor while leading, or at least competing, in the polls. In 2010, she opted to run for attorney general, rather than fight Lamont and Malloy for the gubernatorial nomination. Last year, she accepted Lamont’s invitation to be his LG.

Matt Fitch, her pollster and long-time adviser, said her polling was stronger than her fundraising, but there was no adjustment for Bysiewicz going from a leading to a supporting role.

“They were a team in one day,” Fitch said.

Drajewicz said Lamont and Bysiewicz met early and often to establish her role. “She was very, very cautious around ensuring that what she wanted to take on was in sync with what the governor wanted.”

There are times when Bysiewicz has lingered a bit too long at a microphone in introducing the governor, raising eyebrows. But aides and others say the methodical Bysiewicz has been an asset to the free-wheeling head of state, even if there have been awkward moments. 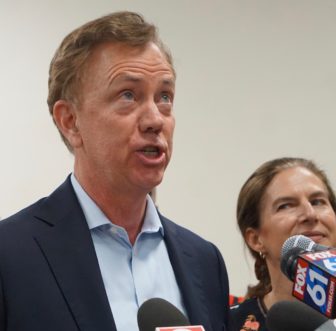 A little side eye from Bysiewicz as Lamont jokingly channeled Joe Biden at the signing of the minimum wage increase: “This is a big…deal.”

At his first public bill signing, Lamont acknowledged the roles of lawmakers crucial to passage of a higher minimum wage. But then he moved to sign the bill without giving them a chance to speak, a faux pas.

“Not yet,” Bysiewicz said, a bit sharply.

During the campaign, Bysiewicz rescued Lamont when TV reporter Mark Davis asked about an opponent’s sniping that Lamont was an out-of-touch multi-millionaire who lived in a Greenwich house with eight bathrooms.

“Have you ever cleaned one of those bathrooms?” Davis asked.

“I’m sure Annie has made him do that,” Bysiewicz quickly said, referring to Lamont’s wife. It draw a laugh and defused the moment.

Mayor Ellen Zoppo-Sassu of Bristol and Mayor Marcia Leclerc of East Hartford are long-time friends who say Bysiewicz has been supportive of other women seeking office for years, but she is dogged by a reputation of trying to win at any costs.

“I think how people perceive her,” Zoppo-Sassu said. “They don’t let themselves get to know her. It’s that first impression that stays with them.”

She won a close statewide primary for secretary of the state that year after airing a misleading ad that suggested her opponent, a fellow state representative named Ellen Scalettar, was soft on pedophiles. In the 2012 race for U.S. Senate, she ran an ad falsely claiming that the endorsed Democrat, Chris Murphy, had accepted more Wall Street contributions than any member of Congress.

Murphy won the primary by a 2-1 margin.

On Friday, Murphy smiled when asked about Bysiewicz.

“I think she was an asset to the ticket, and I think she’s done a really good job since she had the gig,” Murphy said. “I mean, we all bump up against each other in these primaries, but you can’t let that affect your longterm relationships, especially in a state that’s this small. I think she ended up being part of the reason Ned got elected.

“And that’s what we all cared about.”