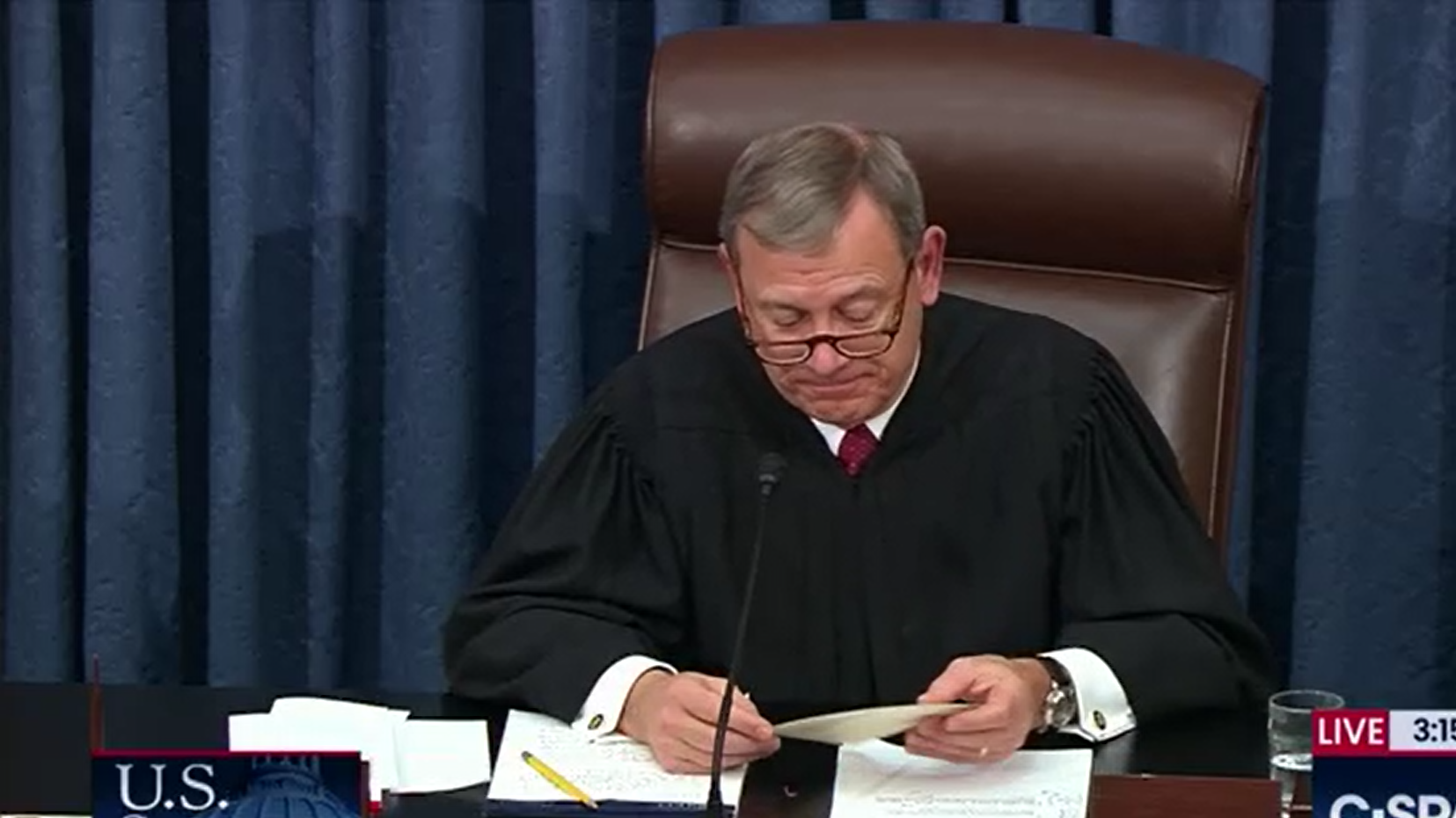 Washington – President Donald Trump’s impeachment trial entered a new phase on Wednesday as senators submitted questions to Democratic House managers prosecuting the case and the legal team in charge of the president’s defense.

Patrick Philbin, a member of Trump’s defense team, responded that no one inside or outside the White House “told us that publication of the book would be problematic for the president.”

“I think we assumed that Mr. Bolton was disgruntled and we didn’t expect he was going to be saying a lot of nice things about the president…” he said.

In his yet-unpublished book, former national security adviser John Bolton allegedly says Trump told him he was withholding nearly $400 million in U.S. military aid to Ukraine to pressure that nation to investigate the Bidens. Hunter Biden served on the board of Burisma, a Ukrainian energy company, while his father was vice president.

Trump is accused of withholding nearly $400 million in military aid to Ukraine to pressure Kiev to investigate Joe Biden and his son.

House impeachment investigators have charged that Trump abused his power to further his political ambitions by having a foreign power investigate his opponent. House Democrats approved two articles of impeachment, abuse of power and contempt of Congress. The Senate is now conducting a very contentious and partisan  impeachment trail to consider whether the president should be removed from office.

Blumenthal then asked another question, this time directed to the House managers, in concert with several other Democratic senators, about the “missing witness rule” that allows one party to obtain an adverse inference against the other for failure to produce a witness with material information.

“Here, one party, the President, has prevented witnesses within his control from testifying or providing documents,” Blumenthal and his fellow Democrats said. “Do the House managers believe Senators should apply the missing witness rule here, and if so, what adverse inferences should we draw about this testimony and documents?”

Rep. Adam Schiff, D-Calif., the leader of the House managers, responded in the affirmative, saying the White House has blocked witnesses from testifying and documents from being released.

On Wednesday, senators wrote their questions longhand on sheets of paper that were passed to Supreme Court Chief Justice John Roberts, who is presiding over the trial. Roberts read the questions, alternating between those submitted by Democrats and those submitted by Republicans.

But a senior GOP staffer said Roberts is rejecting questions from Republican senators that could expose a CIA whistleblower, whose complaint about a call Trump made to the president of Ukraine sparked the impeachment process.

During a break in the proceedings, Blumenthal joked that Roberts stumbled when the read South Carolina  Sen. Lindsey Graham’s question because of the senator’s poor penmanship.

“I’ve found it difficult to read his writing,” Blumenthal said.

Senators used the volatile question and answer portion of the trial, which will last for 16 hours over two days, to rehash their party’s arguments.

Alan Dershowitz, one of Trump’s defense lawyers, argued that anything a president does to get re-elected could be considered in the nation’s interest and is therefore not impeachable.

That provoked a swift reaction from Sen. Chris Murphy, D-Conn.

“The President’s new argument today, that anything he does to benefit his re-election, no matter how corrupt, is unimpeachable, is B A N A N A S,” Murphy tweeted.

Late in the evening, Blumenthal  several other Democrats, including Sen. Kamala Harris, D-Calif, submitted a question about something the president’s lawyers said —  that accepting information from a foreign source may not violate campaign finance laws or be considered foreign interference in U.S. elections.

“It is so without question among the very highest priorities of the intelligence agencies, law enforcement to prevent foreign interference in our elections,” he said.

Murphy gave Roberts a question that focused on a Democratic proposal aimed at upending a GOP argument that allowing witnesses meant spending months on the impeachment trial as fights over subpoenas and other conflicts developed.

“The House managers have committed to abide by rulings by the chief justice regarding witness testimony and evidence and they will not appeal such rulings,” Murphy asked. “Will the president’s council make the same commitment, obviating any concern about an extended trial.”

Trump attorney Jay Sekulow responded “we are not willing to do that,” saying it would violate the “constitutional framework” of impeachment.

Democratic senators pressed House managers on the importance of having witnesses and obtaining documents that the White House has withheld.

“The importance of witnesses is the most important argument Democratic senators could make,” Blumenthal said.

Republican senators say there’s no reason to call any witnesses in the Senate trial.

But some, including Sen. Tim Scott, R-S.C., on Wednesday tried to offer a solution to the impasse, suggesting the House could call the witnesses “so the Senate would not be tied up” with the impeachment process for months.

While they were preparing their case last year, House impeachment managers attempted to call Bolton and other witnesses, but met resistance from the White House.

The question of whether there will be witnesses like Bolton at the impeachment trial is likely to be answered on Friday with a vote that would require at least 51 senators to agree to those witnesses.