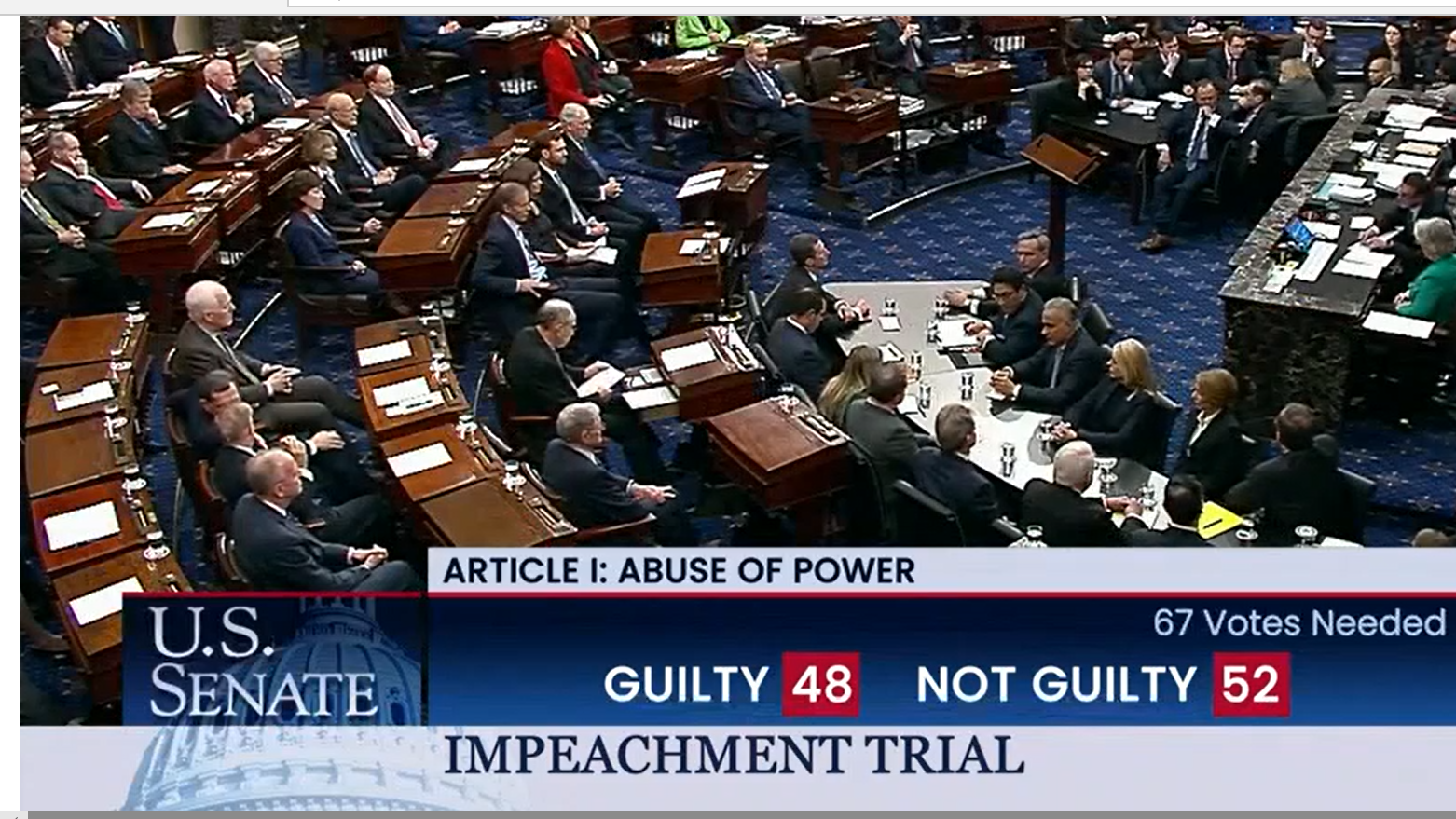 Washington – The U.S. Senate on Wednesday acquitted President Donald Trump of two articles of impeachment in a partisan vote that, while expected, prompted Connecticut lawmakers to warn that the failure to remove the president from office will have dire consequences.

The Senate voted 52-48 to acquit Trump of the first article, which found the president abused his power in his dealings with Ukraine. Trump was accused of pressuring the Ukrainian government to investigate a political rival, former Vice President Joe Biden, by withholding U.S. military aid and a White House meeting.

All Senate Democrats and one Republican, Sen. Mitt Romney of Utah, voted for the article, but the final tally fell well short of the two-thirds vote needed for approval. It did, however, mark the first bipartisan vote in favor of convicting and removing a president in American history.

“The Senate Majority has butchered the Article One powers of the Congress, and has created a dangerous shift of power to the Executive Branch that will haunt our nation for years to come,” said Rep. Joe Courtney, D-2nd District.

“The Senate Majority has butchered the Article One powers of the Congress, and has created a dangerous shift of power to the Executive Branch that will haunt our nation for years to come.”

The Senate then voted along straight party lines, 53-47, to defeat an article that charged the president with contempt of Congress for blocking witnesses and withholding documents requested during the two-month long House impeachment inquiry. Once again, 67 votes were needed to approve the article and remove the president from office.

“While many Republicans admitted what the president did was wrong, they chose to vote not guilty. There comes a time when you must put the country ahead of politics.  The Senate failed to do that today,” said Rep. John Larson, D-1st District.

Trump was defiant after his acquittal, retweeting a meme that showed him winning re-election, not only in 2020, but deep into the 22nd century.

Before Thursday’s historic vote, every senator was allotted 10 minutes to explain the way he or she was going to vote.

With the exception of Romney, many Republicans said the president did nothing wrong – a position adopted by Trump – while others said even if he did something “improper” or wrong, his actions did not rise to the level of an impeachable offense. 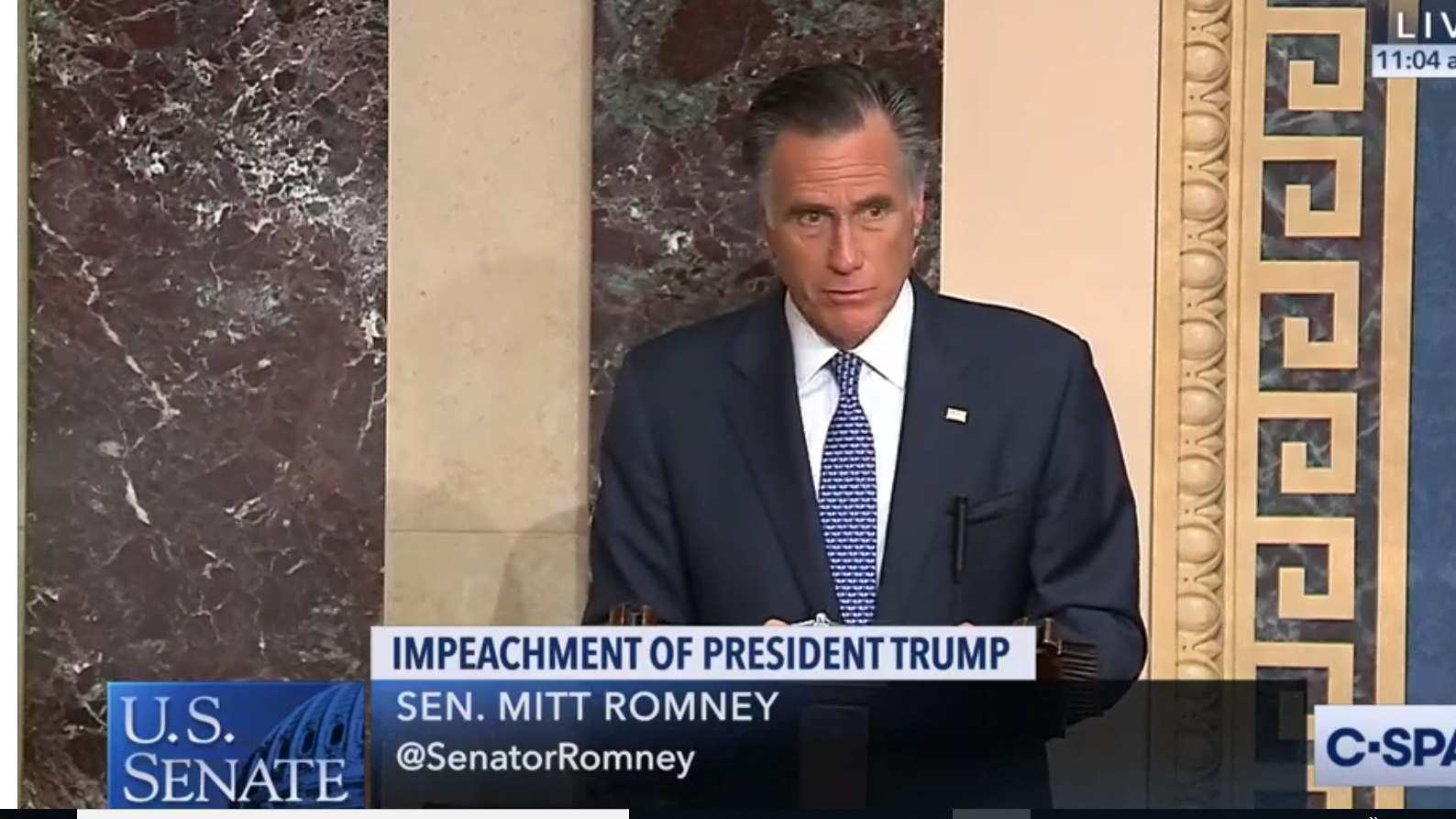 Sen. Mitt Romney of Utah was the only Republican to vote to remove Trump from office.

“I listened to the evidence. Or really, the lack of any evidence whatsoever, and I was convinced — President Trump did not commit any crime,” said Sen. James Inhofe, R-Okla. “Now we can all get back to what we’re supposed to be doing here – working on behalf of the American people.”

“The president is guilty of an appalling abuse of public trust.”

Sen. Richard Blumenthal used his time before the Senate to continue an argument he’s made since the president’s dealings with Ukrain were revealed in September — that Trump’s actions were violations of criminal laws that are specifically cited in the U.S. Constitution.

“The president solicited a bribe when he sought a personal benefit, an investigation of his political opponent, a smear of his rival in exchange for an official act, in fact two official acts — the release of military funding for an ally and a White House meeting in return for that personal benefit,” Blumenthal said. “They were a violation of criminal law at the time of the Framers. And that’s why they put it in the Constitution, bribery and treason are specifically mentioned.”

Blumenthal also spoke of the bravery of the public servants who defied the White House and testified in the House impeachment inquiry, including Ukrainian Ambassador William Taylor. He also praised the anonymous CIA whistleblower who touched off the impeachment inquiry with a complaint about Trump’s phone call to Ukrainian President Volodymyr Zelensky.

And, like many Democrats, Blumenthal decried the refusal of most of his GOP colleagues to allow Democrats to introduce new witnesses, especially former national security adviser John Bolton, and seek other evidence at the Senate trial.

“I will remember … the shame and sadness that I felt when this body, supposedly the greatest deliberative body in the history of the world, voted to close its eyes, to put on blinders to evidence, witnesses, and documents, firsthand knowledge, eyes and ears on the president, black and white,” Blumenthal said. “Documents don’t lie.” 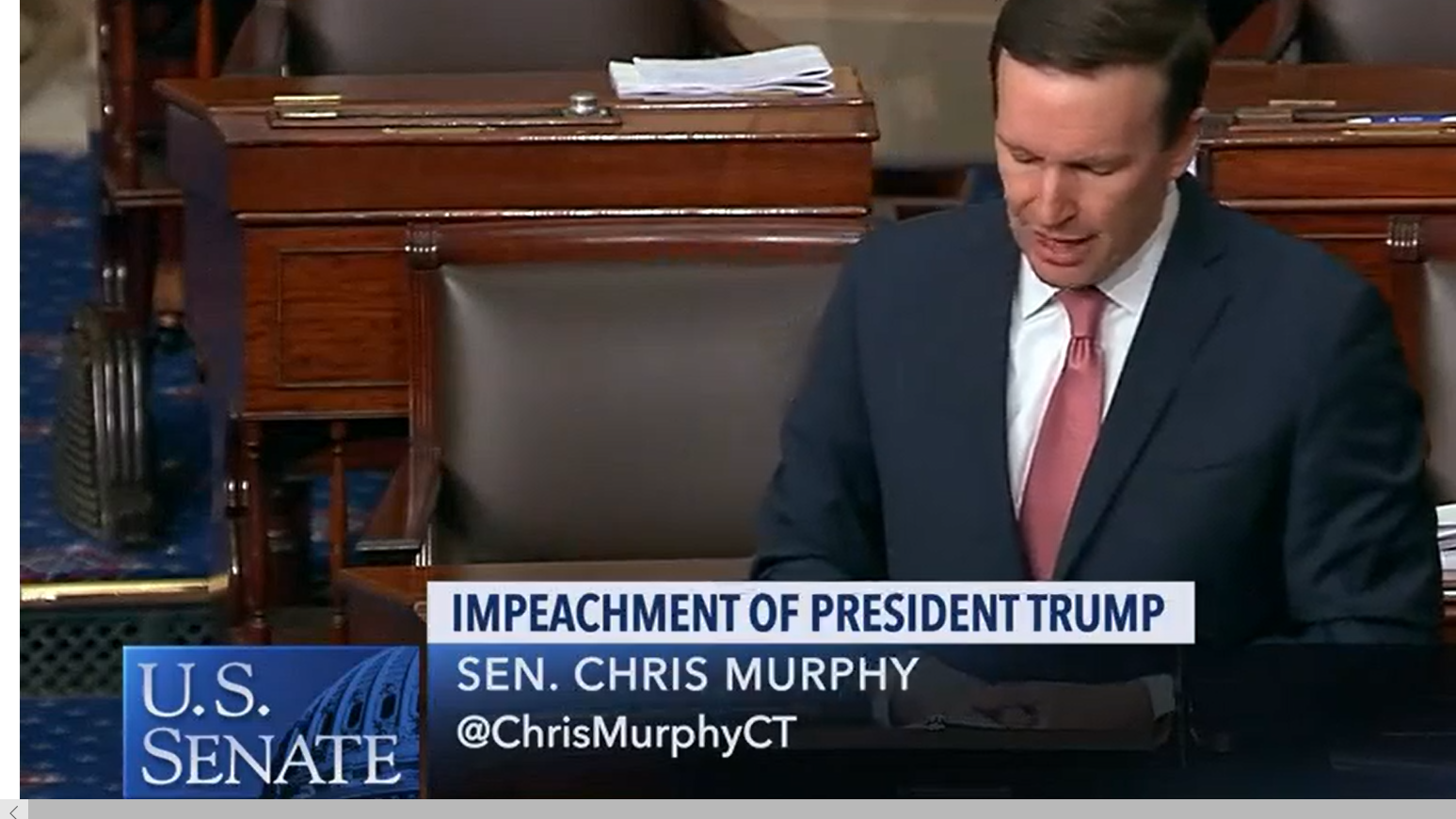 Like many Democrats, Sen.. Chris Murphy said there would be dire consequences in acquitting Trump.

In the 10 minutes allotted to him, Sen. Chris Murphy said the president’s actions threatened the nation’s fragile and unique democracy.

“Democracy is unnatural,” Murphy said. “It’s rare. It’s delicate. It’s fragile. And untended to, neglected or taken for granted it will disappear like ashes scattering into the cold night.”

“Democracy is unnatural. It’s rare. It’s delicate. It’s fragile. And untended to, neglected or taken for granted it will disappear like ashes scattering into the cold night.”

Murphy said the 100-member U.S. Senate is “given the responsibility to keep it safe from those who may deign to harm it.”

“The difference between a Democracy and a tin pot dictatorship is that here we don’t allow presidents to use official levers of power to destroy political opponents, but that’s what president Trump did,” Murphy continued. “And we all know it. Even the Republicans who are going to vote to acquit him today know that.”

In his speech, Murphy said the Senate had put on a “show trial” and delivered a “gift-wrapped present for a grateful party leader.”

“We became complicit in the very attacks on democracy that this body is supposed to guard against,” Murphy said. “We have failed to protect the republic.”

Murphy, who gave his speech Wednesday afternoon, was upstaged by Romney, who followed him.

“The president is guilty of an appalling abuse of public trust,” Romney said.

Romney’s vote not to acquit the president of abuse of power prevents Trump from maintaining the impeachment was completely partisan.