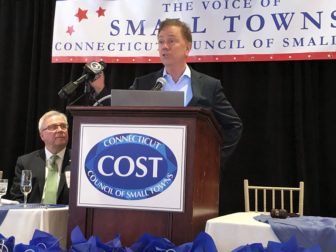 But this overture to the lawmakers, who have been waiting since the fiscal year began on July 1 to move this aid on to communities, doesn’t resolve a larger borrowing dispute between them and Lamont.

Also Friday, the administration indicated it also was ready to work with legislators to authorize bonding of another $475 million this fiscal year for municipal school construction projects.

Billions of dollars in financing for this fiscal year and next for dozens of capital projects and programs throughout state government still remain to be negotiated.

“The time has come to move forward with a targeted, municipal aid bond package that will include new authorizations so that we can immediately deliver on the promises we have made to our municipalities,” Lamont wrote Friday to his budget director, Office of Policy and Management Secretary Melissa McCaw. “We are now eight months into the fiscal year without solutions to our transportation needs and a bond package. No longer can our cities and towns wait.”

Lamont directed McCaw to provide legislators with details for a bill, which would have to be passed.

The State Bond Commission also must endorse borrowing before bonds can be issued. But the governor chairs that 10-member panel and his budget office sets its agenda, so the administration could clear that hurdle within a few days or weeks after a bonding bill was signed into law.

“Immediately upon passage, on my behalf, please schedule a bond commission meeting within the statutory period allowed subject to all notice requirements,” Lamont wrote to McCaw.

Following an appearance Wednesday before the Connecticut Council of Small Towns, Lamont said he would ensure that three delayed grants would move forward in the near future, regardless of whether legislators endorsed a plan he supported to toll large, commercial trucks.

“I’m trying to honor the commitment that previous governors have made,” Lamont said Wednesday following the COST summit with 250 local leaders at the Aqua Turf in Southington.

The governor, who is a former member of Greenwich’s Board of Finance, said he understands the challenges of balancing a municipal budget. “I’ll make sure we get their municipal aid going, because that’s a deal we made with them.”

At issue were three municipal grants that the state funds with long-term financing, specifically by selling bonds on Wall Street.

The stalled grants include the:

On Friday, Lamont proposed maintaining funding levels for all three programs at 2018-19 levels.

Lamont and his legislators have been at odds since last June over a new two-year state bond package — which covers not only the three municipal aid programs, but also billions of dollars for a wide array of capital projects, economic development initiatives, conservation efforts and other programs.

“It’s just good to see the process is continuing to move forward,” said Joe DeLong, executive director of the Connecticut Conference of Municipalities. “The roller coaster ride of tying this to the transportation package was really making this difficult for communities.”

“Towns are now breathing a huge sigh of relief because funding will be available soon so that towns can go out to bid for projects that should begin this spring,” said Elizabeth Gara, executive director of the Council of Small Towns.

“It’s good that it’s being released,” said House Majority Leader Matt Ritter, D-Hartford. “The towns are relying on it.”

Even if the two sides agree to act now on a smaller bonding measure just to cover municipal aid, they are expected to battle for some time to come over borrowing for other programs.

Absent toll receipts, low-interest federal loans and other revenue sources in the transportation plan are now in political limbo, and Connecticut may have to shift bonding away from many non-transportation programs and into its highways, bridges and rail lines, Lamont said.

Ritter added that “we obviously have some debate to go” to resolve the full bond package. “But I’m confident we’ll be able to work something out.”