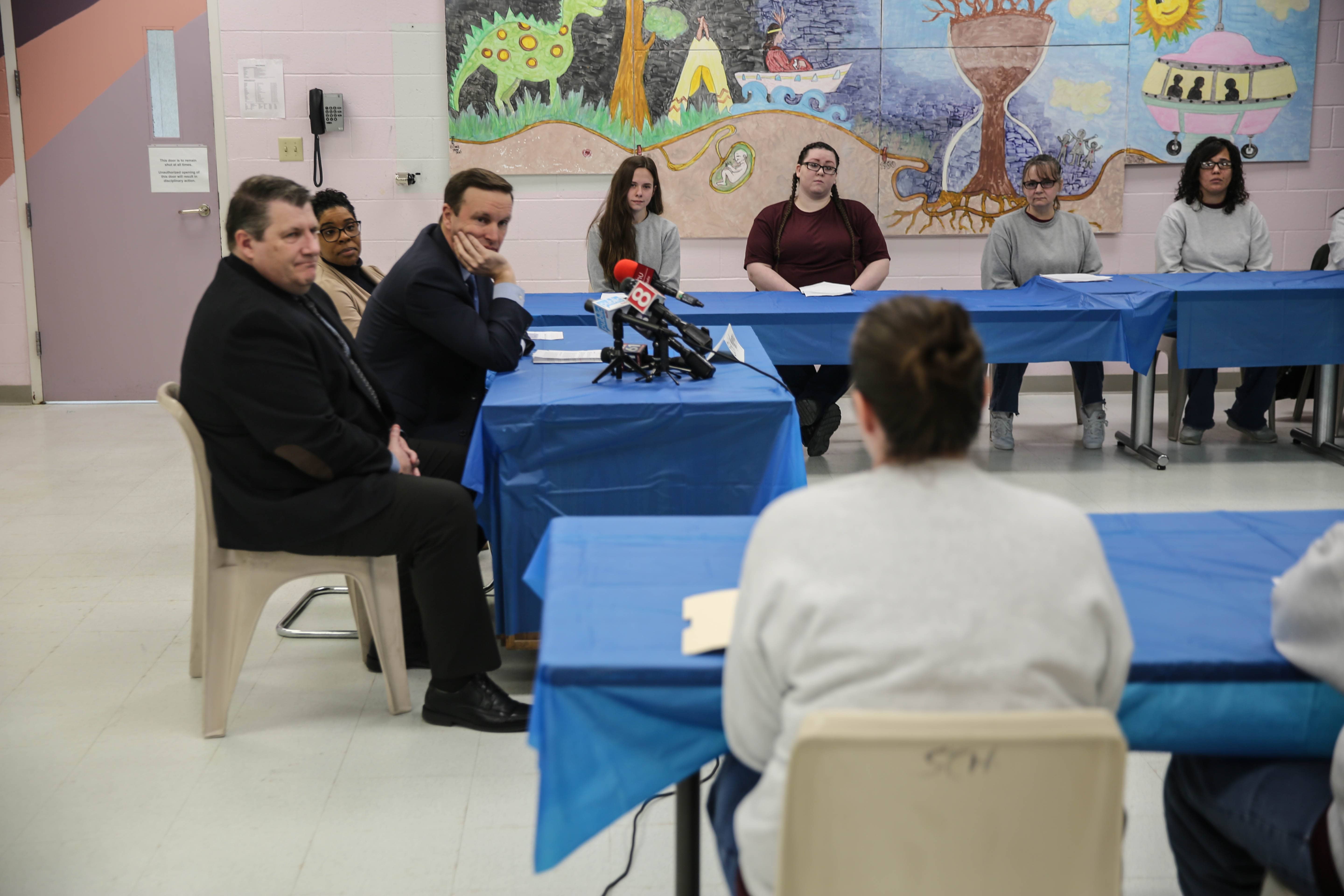 Department of Correction Commissioner Rollin Cook and Sen. Chris Murphy listen to inmates at York Correctional Institution talk about the college classes they have taken behind bars.

Niantic — When Shonda Northup first arrived at York Correctional Institution 15 years ago, she was perennially angry, always looking to settle scores with those who had wronged her. Then she started taking college classes behind bars — course work that helped her find herself and see the humanity in others.

“This program helped me to believe in myself, to see something other than violence, and to see that other people are important, not just me,” said Northup, who is incarcerated on a murder conviction. “It helps me really look at who I am, who I want to be, who I want to show my daughter I am.”

Northup told her story Monday morning to U.S. Sen. Chris Murphy, who visited York, the state’s only prison for women, to collect information on the Second Chance Pell pilot program, a federal grant that aims to reduce recidivism by expanding access to education for incarcerated people. Eleven students and representatives from Connecticut community colleges that receive the grant money told Murphy about the program’s value, and the immeasurable benefits that inmates gain from taking classes while they’re locked up.

Incarcerated people lost the ability to use Pell grants in 1994 when President Bill Clinton signed into law the Violent Crime Control and Law Enforcement Act.

“It made no sense because this is supposed to be about providing people with the opportunity to succeed once they have done their time,” Murphy said. “You can’t succeed if your education is completely interrupted, and if you’ve been made ineligible for the program that can help you succeed.”

In 2015, the Obama administration announced the Second Chance Pell pilot program, an experimental initiative that bypasses certain financial aid regulations so grants can be offered to incarcerated students. Connecticut prisons have received Second Chance Pell funding since 2016, when Asnuntuck, Quinebaug Valley, Three Rivers and Middlesex community colleges began offering courses through the program. Federal lawmakers will need to extend the funding beyond the pilot program for it to become permanent.

“We need to change the law,” said Murphy.

There are several bills before Congress that would do just that. The REAL ACT, a bipartisan bill, would restore Pell funding for incarcerated students. The College Affordability Act, a broader proposal, would also restore the grant and it passed through the House Education and Labor Committee last year.

“Even in a Washington climate that is super toxic and partisan,” Murphy said, “this is one of those issues that has support from both sides of the aisles.” 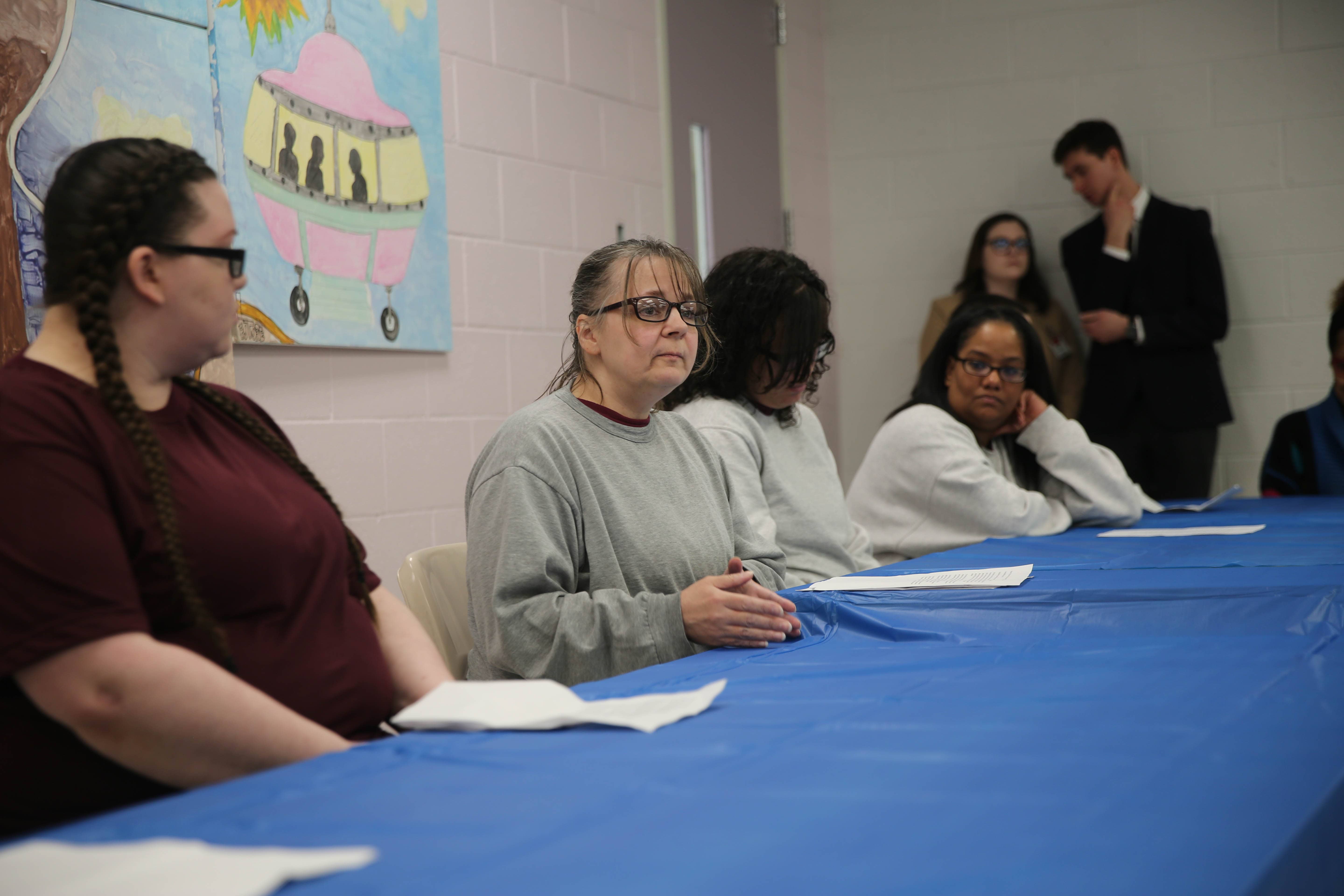 Tracy Shumaker talks about how her college courses have helped her bridge the gap between her lives in and outside of prison. “Education was such an amazing opportunity for me,” she said.

The 11 female inmates gathered Monday to speak with Murphy said their college coursework has helped them reframe their prison sentences and given them direction. The classes have offered them a line to the outside world and a way to stay connected with their parents and children.

Like Northup, Tracy Shumaker has been locked up at York for 15 years on a murder conviction. Her kids have grown up while she’s been incarcerated. Her English class allowed her to communicate with her son, who loves William Shakespeare, giving her a link to a world outside the confines of York’s walls.

“This allows us to connect on such a deeper level than that silence on the phone sometimes,” she said.

Other students told Murphy the classes have kept them on their best behavior, mindful of losing access to the program because of disciplinary infractions. The courses have built up their self esteem and self worth, and help them envision a more meaningful life.

Caught in the throes of addiction, Jennifer Labbe’s life was a revolving door of drug use and incarceration before she was last sentenced for a robbery conviction in 2016.

“I began to reflect on what I need to do differently in my life,” Labbe said. “I didn’t care what direction my life was going.”

Now, Labbe has found purpose. She’s working on a marketing certificate and considering a business degree. She knows her newfound fulfillment will help her provide for her children when she’s out of prison.

“I never really understood the value of education until taking these courses,” said Labbe.

Expanding access to education is in line with Department of Correction Commissioner Rollin Cook’s vision for the state’s prisons and their role in strengthening reentry efforts.

“Can you imagine if we were able to expand these programs?” Cook asked Murphy and others at the roundtable discussion. “The way that you feel about yourself gives you hope, it gives you a plan for the future. That should be spread throughout the entire population, and that’s what breeds success when you get out.”