‘Empathy Tour’ seeks to give formerly incarcerated their lives back 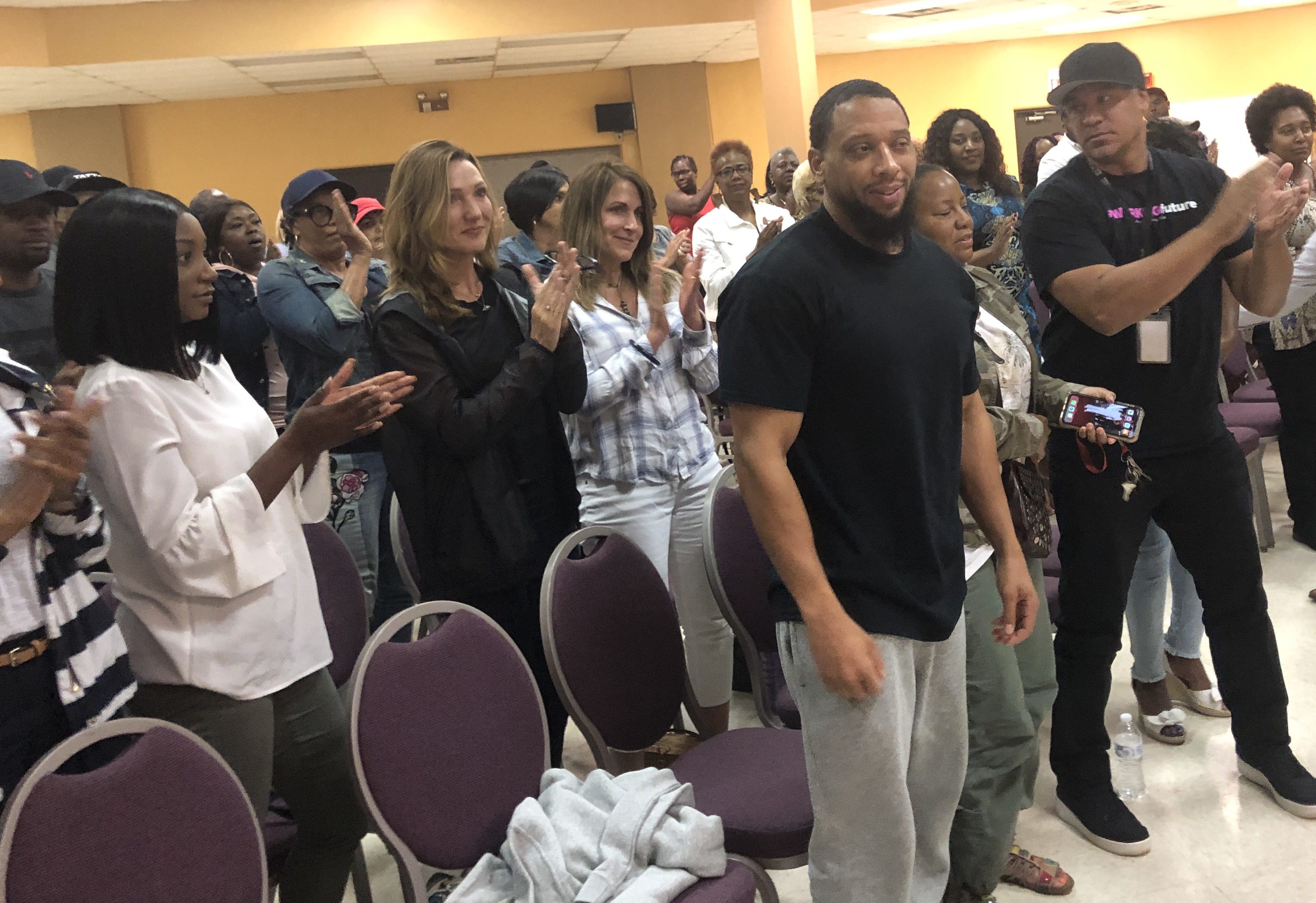 Lonnie Jones, center, is applauded by Bridgeport residents celebrating his release from prison.

Bridgeport — Seeing Lonnie Jones walk into the basement of Mount Aery Baptist Church was a surreal moment for Tino Negron.

The previous day, Jones had stepped outside the confines of a federal prison for the first time in almost 23 years, a beneficiary of the First Step Act recently passed by the U.S. Congress, which has helped reduce prison time for hundreds of former inmates. Family and friends gathered around him outside of a federal courthouse, hugging him and beaming with happiness.

Jones was treated as a guest of honor the next night at Mount Aery, in Bridgeport. He got a standing ovation from the crowd gathered there, a prodigal son finally returned.

“It’s a pleasure to see you come home,” Negron told Jones, whom he has known since Jones was a teenager. “That’s a big deal for me. I was incarcerated when you went away.”

Negron was among the more than 150 people gathered in the church’s basement last week to talk about the challenges people face when they’re released from prison. The roundtable was part of an “Empathy Tour” sponsored by Cut 50, a bipartisan national organization that is working to cut crime and the country’s prison population in half.

There will be another roundtable with different panelists on Tuesday night (tonight) in Hartford, at Thirman L. Milner School from 6 to 8 p.m.

“We want to be able to increase empathy in the community around criminal justice reform, around survivors of violence and around people who have been debilitated by substance abuse, which all have a criminal justice intersection,” said Louis Reed, a Cut 50 organizer who is based in Connecticut. “We want to build coalition and communities so that those coalitions can move our legislature to action.”

Reed said one of Cut 50’s priorities is to get the state legislature to pass a Clean Slate Act, a bill  proposed during the last legislative session that would have automatically sealed a person’s criminal record for certain offenses after seven years. The bill made it out of the Judiciary Committee, but died in the Senate.

Such a measure, Reed said, would mean “people who have served their time, served their debt to society, who have been divorced from their criminal past, [would] be able to have their life back.” 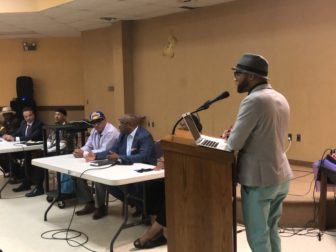 Louis Reed leads a panel on the challenges of reentry to one’s community after leaving prison.

Bridgeport City Councilman Ernie Newton, who himself spent time in federal prison, encouraged those in attendance to contact their elected officials to put pressure on them to pass the legislation. “You’ve got to hold your legislators accountable,” he said. “We can talk about it, but if it’s not written down, it really doesn’t mean anything.”

Newton and Negron’s fellow panelists were notable because they all have firsthand experience with the criminal justice system. Joining them were Mayor Joseph Ganim, who spent seven years in prison; Fred Hodges, the director of community affairs for Family Reentry, Inc., who served a 17-and-a-half-year prison sentence; Rev. Nancy Kingwood, who through her ministry works with many justice-impacted community members; and Lyle Jones, an imam in the state’s Department of Correction.

One of the major themes of the discussion was how a person can move their lives forward after committing a crime.

“In redemption, the first thing we have to do is acknowledge our wrong,” Jones said.

Moving beyond the personal impact of a criminal conviction, panelists encouraged the public to see crime as having ripple effect on families and entire communities.

“We always look at people as the crime they committed, and never as a person,” Kingwood said. “I am not minimizing when there are victims involved, but what I am saying is in order for us to be compassionate, we really need to understand the people behind the crime, and how it impacts their families. Because when people go to prison, their families do time, as well.”

Reentry looked a lot different when Hodges got out of prison.

“When I came home in 2006, there was no reentry services,” he said, crediting a mentor for helping him put his life together after he left the penitentiary. “You’ve got to have somebody that a person that’s coming home can [use as a role model]. If there’s nobody that they see that looks like them, that [has] been where they’ve been … people don’t care about how much you know, until they know how much you care.”

Such services are an especially important concern in Bridgeport, where, Hodges said, more than half of the city’s residents have criminal backgrounds. 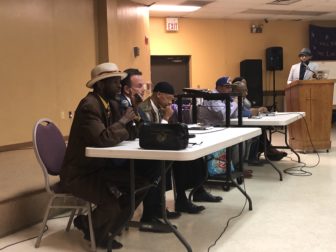 Reflecting on his own reentry, Ganim acknowledged he had access to resources many do not once they’re no longer behind bars. Such understanding has influenced his priorities to create more services for the formerly incarcerated.

“We need to do more, and we need to do a better job,” Ganim said. “The legitimate need is much greater than the infrastructure can support, even with the best of conditions, as we sit here today.”

Ganim caught flak from Hodges for not redirecting more money toward those much-needed programs.

“I’m tired of somebody telling me about volunteering all the damn time. I do volunteer,” Hodges said. “But at the same time, our parents, our families pay taxes to this city,” so those dollars should be directed to reentry programs.

Reflecting on his first few months out of prison, Negron recalled he didn’t have an ID or a Social Security Number. He was told he couldn’t get one without the other. He went to a family reentry center in Bridgeport, where people helped him track down those documents.

“So, what happens to the brothers and sisters who don’t have those resources?” He asked. “What are they gonna do then?”

Negron was released from prison last September after being incarcerated for 30 years. Talking to the family of the man he killed would violate his parole and get him sent back, which means he’s unable to apologize face-to-face. Instead, he’s been seeking redemption by volunteering at Manson Youth Institution, where he meets with a teenager he said lives by himself, isolated from his peers.

Adhering to the terms of his parole means there are a slew of things Negron can’t do, but, he said, “What I can do is go to the penitentiary and convince a young man that he don’t have to be alone no more.”