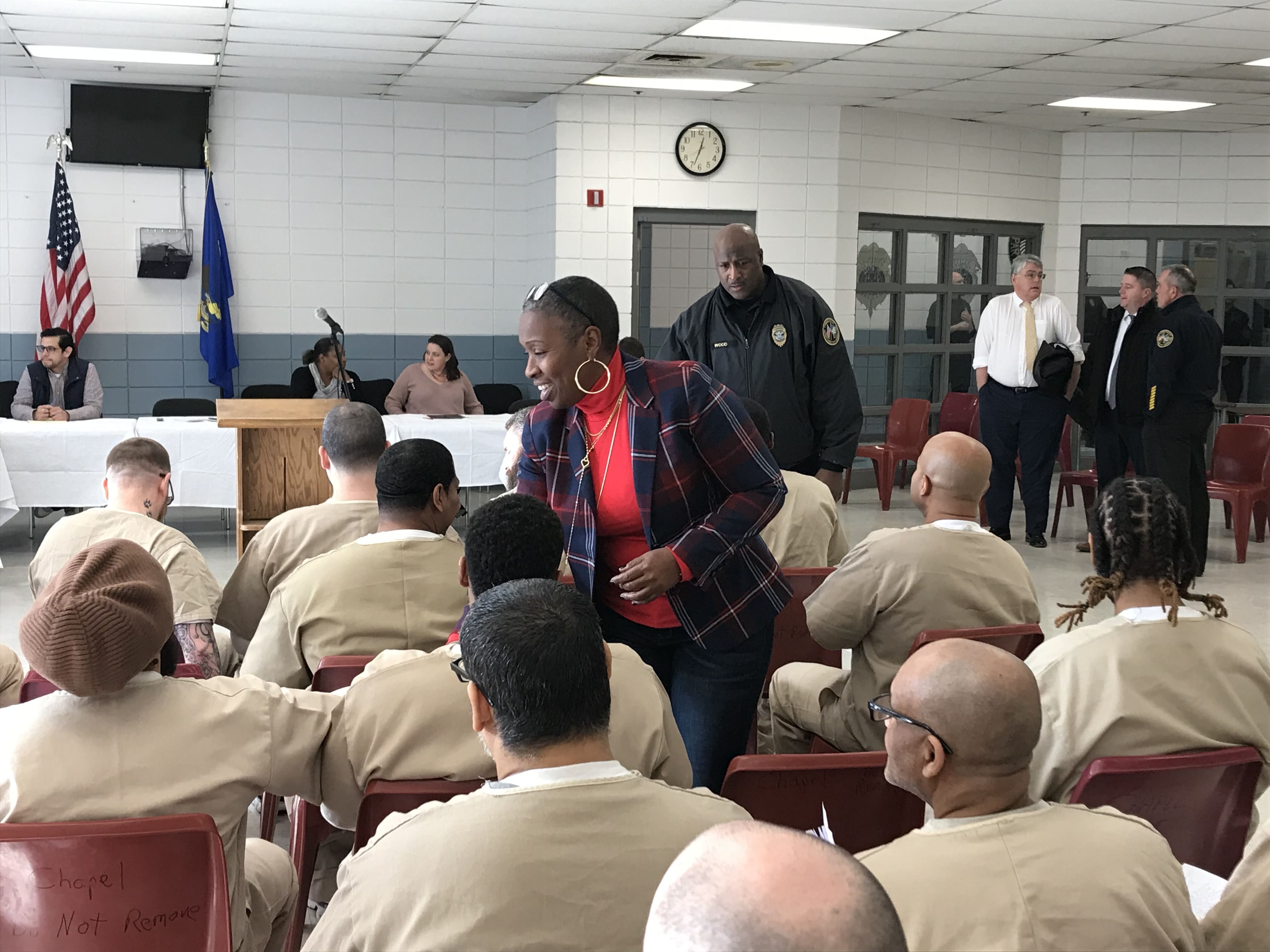 Rep. Robyn Porter meets with inmates at Cybulski Correctional Institution to learn how their records continue to affect their lives after their release from prison.

Members of a task force studying how people’s criminal records negatively impact their lives after prison have produced dozens of recommendations for mitigating this harm, including remedies for housing and employment discrimination.

The council co-chairs, both Democratic lawmakers, will soon meet with the heads of the subcommittees and Republican members of the council to try to turn some of the recommendations into laws during the 2020 legislative session.

“I’m really trying to figure out ways to dismantle the implicit bias, not to even mention the straight-up racism, the blatant discrimination,” said Rep. Robyn Porter, D-New Haven, who co-chairs the group, called the Council on the Collateral Consequences of a Criminal Record. “It’s deep-rooted.”

The only person with a record on the full council, Tiheba Bain, said there are countless barriers people with criminal convictions face after they’ve done their time.

“There are brick walls and glass ceilings that I come up against every day, being a formerly incarcerated woman,” Bain said. “We have so many onslaughts coming at us that it’s hard for us sometimes to even breathe.”

“There are brick walls and glass ceilings that I come up against every day, being a formerly incarcerated woman.”

Advocates on the council echoed the need to hold employers and property owners accountable should the proposals become law. Lorenzo Jones, the co-founder and co-executive director at the Katal Center for Health, Equity, and Justice, cautioned against making “a bureaucratic list of things that would be great to do,” without creating a mechanism for punishing those who continue to discriminate against people with records.

Jones said that if there’s no way to punish those who violate any new anti-discrimination laws, “we’re moving the chairs around the deck of the Titanic.” Without a full understanding of the different barriers the formerly incarcerated face, Jones said, and absent an ability to penalize those who continue to violate the law, discrimination will continue to exist, “and it’s a bunch of bureaucrats talking about the the great stuff they would do if they could, but they can’t.”

Here are some of the central proposals made by the council’s subcommittees this week.

One notable proposal made by the research subcommittee would allow people who are incarcerated for felonies, or on parole, to vote. Connecticut is the most restrictive state in New England when it comes to voting rights for people with criminal records In Vermont and Maine, even those convicted of felonies are eligible to vote when they’re in prison.

That recommendation would also help eligible voters locked up on Election Day to cast a ballot. If full enfranchisement for inmates is not possible, Clark suggested the Department of Correction assist incarcerated people to register as part of the exit process from prison or parole.

Other research recommendations include:

The employee subcommittee focused much of its work on increasing employer interest in hiring formerly incarcerated people.

“We are in a unique moment in our country where we have a declining unemployment rate,” said Marc Pelka, chairman of the employment subcommittee and the governor’s undersecretary for criminal justice policy and planning. At the same time, he explained, while more people are working, some employers are still struggling with vacancies. Certain jobs that require more training but offer higher wages have open positions that could be filled by people with criminal records.

“We have open manufacturing positions in our state, we have employers who are speaking in a very compelling way about the advantages they see in hiring people with criminal records,” Pelka said. “We have the ability here to reduce stigma. We have the ability to really fasten this into an overall workforce development and economic message.”

Pelka suggested holding “second chance hiring forums” to connect business leaders to people with records, and providing access to fidelity insurance bonds to reduce employers’ liability in hiring them. He also recommended expanding employers’ capacity to recruit workforce talent from inside penitentiaries so they could host job fairs in prisons.

Other proposals – there were 31 in all – include:

The tiny “yes” box that asks prospective property renters whether they’ve ever been convicted of a crime single-handedly holds enormous power over people who have, said Richard Cho, who chairs the housing subcommittee. Many don’t even bother.

“I think most people with criminal records live in fear of applying for housing,” said Cho, CEO of the Connecticut Coalition to End Homelessness.

Cho and his colleagues’ goal is to prohibit landlords from denying prospective renters solely on the basis of a criminal record. Their recommendations include:

These changes would apply to all types of state and federally-assisted housing, as well as the majority of private sector housing.

Enforcement would be a key component of the rule change, Cho said. He proposed amending state statute to make people with criminal records a protected class under the state’s fair housing law. He acknowledged there was concern among subcommittee members about this change, “because in their mind, that means that they would be protected the same way that somebody would be protected based on race or disability.”

But the Commission on Human Rights and Opportunities is already taking cases of prospective employees and renters who feel they have been discriminated against because of their criminal records, said Michelle Dumas Keuler, an attorney with the agency.

“We take them as disparate impact cases, based on race, color and national origin because statistically, people who are African American and Hispanic are arrested [and] convicted at higher rates than Caucasians,” she said.

Keuler said making people with criminal records a protective class would not mean landlords would be forced to rent to everyone with convictions who apply to live on their property.

“There’s always checks that people do, both in employment and in housing, that are related to whether the person’s a good employee or a good tenant.”

The council’s two Republican members, Rep. Craig Fishbein (R-Wallingford) and Sen. Craig Miner (R-Litchfield), released their own report that simultaneously agreed broadly with the goals of the full council and philosophically opposed making “blanket changes to the policies with no consideration of circumstances unique to each instance.”

Their position is notable, given that they will play key roles in turning these recommendations into bill proposals this session.

Miner and Fishbein voiced support for a few specific proposals, like ending the barring of people with convictions from serving on a jury, centralizing criminal background checks performed by state government agencies and enhancing prison education programs.

Porter said she planned on hosting public hearings in the future to get broader input as they try turning recommendations into laws.

“The council was to lay a foundation,” she said. “This is an ongoing process. The council has ended, but the work still continues.”