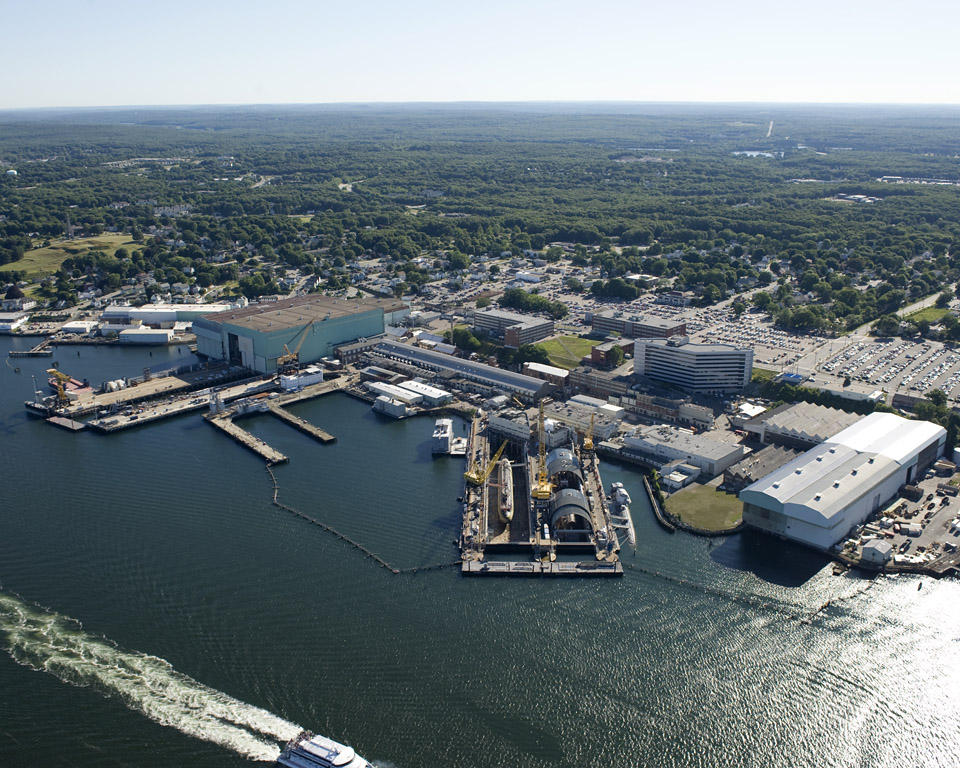 Electric Boat Shipyard in Groton, one of Connecticut’s largest employers

Connecticut’s manufacturing, tourism and hospitality sectors are on the economic front lines as the coronavirus hits the state full force, business leaders and economists warned Thursday.

And the pandemic could also have a chilling effect on consumer confidence, sparking a wave of thrift that threatens an already vulnerable retail sector.

Many tourist attractions, restaurants and hotels already are noticing sharp declines in business as schools and colleges close, athletic events are suspended and travel is curtailed, all while more and more residents retreat indoors. Nationally and globally, sharply declining stocks and an oil war that threatens American shale oil producers already had economists worried about a recession — even before the coronavirus took aim at consumer confidence.

“This is a shock of magnitude that we’ve never seen before. This pretty much guarantees a recession.”

“I do not see any way we do not take a big hit. It looks like things are going to get significantly more disruptive,” said University of Connecticut economist Fred V. Carstensen. “It seems very unlikely that we won’t have at least two quarters of low growth — and possibly a quarter of negative growth.”

“This is a shock of magnitude that we’ve never seen before,” DataCore economist Don Klepper-Smith, who was Connecticut’s chief economic advisor in the late 2000s, said of the health crisis. “This pretty much guarantees a recession.”

Business leaders generally agree that full impact of the infectious disease on the economy remains unknown. But they are separating businesses into two basic groups: those that can function with employees working from home, and those that can’t.

Welders can’t telecommute. And the animal caretakers at Mystic Aquarium can’t keep the whales in their bathtub back home.

So what do Connecticut’s manufacturers do when the governor advises people to work from home?

“You need to have people in the workplace,” said Joseph F. Brennan, president and CEO of the Connecticut Business and Industry Association. “People are already talking about staggered shifts, shorter work times, whatever you can do to get your product out and still keep people safe.”

And even having enough employees show up at the manufacturing plant isn’t always enough.

Some factories require workers to wear protective equipment, such as face masks, to meet federal and state safety requirements. And there is a national shortage of certain types of personal protection equipment.

One of Connecticut’s largest, the Groton-based Electric Boat Shipyard, has canceled all executive travel and followed all CDC protocols for warning workers about cleanliness, said EB spokeswoman Liz Power.

“I do not see any way we do not take a big hit. It looks like things are going to get significantly more disruptive.”

The submarine builder which employs about 12,500 people in southeastern Connecticut and another 4,500 at Quonset Point, R.I., also has a stable, U.S.-based chain of subcontractors and suppliers, Power said.

But other companies — which are not manufacturing vessels for the U.S. military — rely on domestic subcontractors whose components are assembled overseas before delivery to a Connecticut manufacturer.

And it’s not just China’s economy, and its manufacturing businesses that are struggling. In a global pandemic, supply uncertainty, business experts said, is the norm.

It’s not just a question of how much business is out there,” Brennan said. “It’s also, is the supply chain capable of fulfilling what you need.”

Tourism is bracing for coronavirus’ impact

And while Connecticut’s manufacturing sector has grown since the last recession ended in late 2009, the most gains have come in tourism, which in turn supports restaurants, hotels and the hospitality sector in general, Carstensen said.

The state’s southeastern corner houses most of Connecticut’s top tourism attractions, some of which already are bracing for the coronavirus’ spread — and its inevitable impact on visitors.

“Without question, tourism has taken a hit,” said Thomas Sheriden, president of the Eastern Connecticut Chamber of Commerce. “I called four hotels in the last four days and their numbers are down significantly.”

Mystic Seaport Museum announced Thursday it was closing to the the public starting Friday and running through at least March 30.

“Without question, tourism has taken a hit. I called four hotels in the last four days and their numbers are down significantly.”

Thomas Sheriden
President of the Eastern Connecticut Chamber of Commerce.

The seaport, which draws 250,000 visitors per year, normally is open four days per week during the late fall and winter, shifting to seven days starting March 30 and running through October.

“We’re coming up to the beginning of our high season,” said seaport spokesman Dan McFadden, who noted two-thirds of its customers visit between April and October.

McFadden added that seaport officials would monitor the coronavirus situation and reassess the temporary closure prior to March 30.

A spokesperson for the nearby Mystic Aquarium could not be reached for comment Friday. But the attraction’s website and phone number did not report any change of operating hours.

The state’s two largest attractions, the Foxwoods Resorts Casino and Mohegan Sun Casino, haven’t said yet whether they would alter hours during the coronavirus crisis.

“We’d certainly take that under consideration, but we’re not obligated by it. There is not an obligation,” said Chuck Bunnell, the Mohegan tribe’s chief of staff. “The state does not have jurisdiction here, but we work very closely together and have an agreement on communication.”

The Mashantucket Pequot tribe, which operates Foxwoods, did not comment Thursday.

Major League Baseball announced Thursday it was suspending the rest of spring training and the opening two weeks of the season. This also is expected to affect teams’ minor league affiliates, including the Hartford Yard Goats, the Double-A affiliate of the Colorado Rockies.

It also could impact the Norwich Sea Unicorns, an affiliate of the Detroit Tigers based out of Dodd Stadium in southeastern Connecticut.

But the Norwich team plays at Single-A short-season — a level assigned to many former college players immediately after the MLB Draft — meaning its season doesn’t begin until mid-June.

Mohegan Sun casino officials haven’t said whether they will restrict access due to the coronavirus crisis.

“It’s a very fluid situation that seems to be changing every hour,” said CJ Knudsen, the Sea Unicorns’ senior vice president, adding he’s hopeful baseball players will be back on the field by then.

“It’s a tough situation for everybody,” Knudsen said, adding the team employs more than 150 people, all of whom rely on three months’ worth of business at the ballpark each summer.

Scott Dolch, executive director of the Connecticut Restaurant Association, said restaurants “are seeing somewhat of a decline in the recent week” and not just those near tourism attractions.

But Dolch also noted that food supplies have not been impacted to date, so it’s too soon to panic.

Restaurants have been stressing cleanliness and hygiene precautions to staff, and are prepared to direct sick workers to stay home, he said. “We’re still in the planning stages, trying to understand what’s going on around us.”

Dolch added that most restaurants operate with very thin profit margins, equal to 3% to 5% of gross receipts. Any substantial interruption of business would undoubtedly have a major effect on the industry, he said.

Thrift is a problem for CT economy

“We are probably looking at shocks to both supply and demand before this crisis is over,” Klepper-Smith said.

Businesses may struggle to get the raw materials and other supplies they need.

Equally important, though, is that consumers — who currently are scrambling to buy medical supplies, food,  and other essentials — may start hoarding their dollars next.

Workers without significant paid sick and vacation benefits may forfeit income as they stay home to keep healthy — or if they must watch children as child-care services shut down.

“If we all decide to be thrifty, demand, of course, disappears,” Klepper-Smith said. “Then the economy feeds on itself and makes things worse.”

“Businesses, I think, are still kind of preparing. There’s a real kind of uncertainty about what’s going to come next,” said Tim Phelan, president of the Connecticut Retail Merchants Association. “What hurts retailers more than anything else is when consumers are unsure. We may have to make adjustments on the fly.”

Skype to the rescue

But not all is gloom and doom, according to Joseph McGee, vice president of the Business Council of Fairfield County.

Connecticut’s financial services sector, which features some of the state’s highest-paid workers — and taxpayers — is better prepared with technology to respond to this crisis than ever before, McGee said.

Brokers, hedge fund managers and others in the field might not be taking the commuter train from Fairfield County into Manhattan too often in the near future.

Many larger companies already have responded with video communications via computer, he added. “They are Skyping, they are Zooming. In terms of actual work, we’re surprised at how much we can conduct when we’re not in the office.”

Lamont to keep schools closed until at least May 20, says hospitalizations are dropping

by Gregory B. Hladky and Jacqueline Rabe Thomas

The decision not to close schools for the rest of the school year is an effort to keep students engaged.

by Jenna Carlesso, Keith M. Phaneuf and Gregory B. Hladky

Workers, fearing for their lives, call on the state to provide more protective gear.

Other coronavirus statistics show more men than women are dying of COVID-19.

by Jacqueline Rabe Thomas and Gregory B. Hladky

State officials said the rate at which the coronavirus is spreading seems to be slowing down.