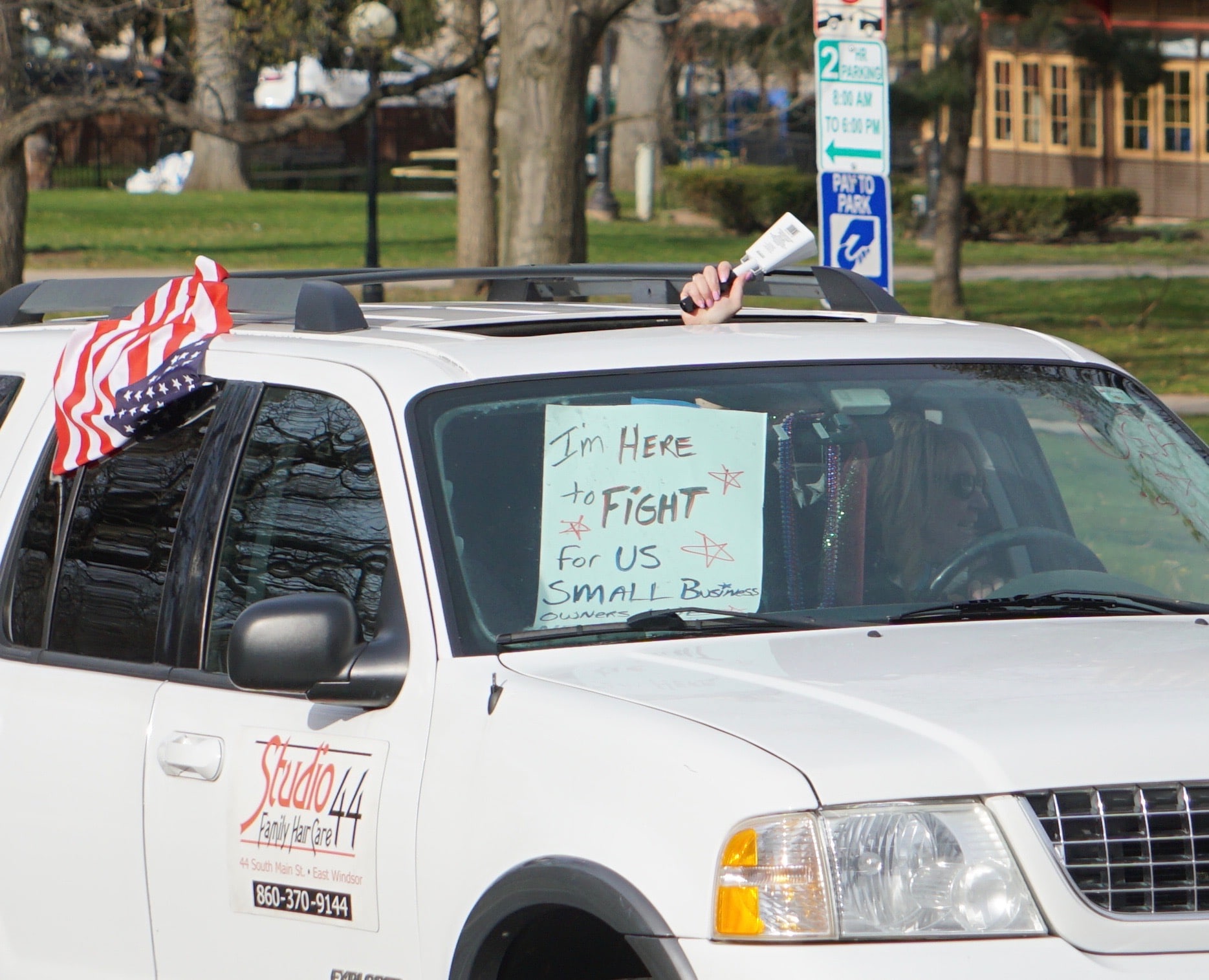 A hair cutter wants to get back to work. She was one of the protesters circling the State Capitol on Monday,

The sweeping restrictions Gov. Ned Lamont has imposed on commerce and social life to slow the spread of COVID-19 drew a noisy protest by motorists and the promise of court challenges Monday by a conservative Republican legislator and the leader of the Libertarian Party.

Rep. Craig Fishbein, R-Wallingford, said he is preparing a lawsuit accusing the governor of unconstitutional overreach on behalf of plaintiffs he declined to identity, while Dan Reale of the Libertarian Party said his party is separately working on its own legal challenges.

Since declaring a public health emergency on March 10, the governor has issued 28 executive orders intended to stop the spread of a novel coronavirus blamed for 1,331 deaths in Connecticut.

Other governors have issued similar orders, most reflecting the advice of public health officials in the federal government.

Attorney General William Tong said the constitution and a century of legal precedent gives the governor powers to protect public health, and he is confident that Lamont’s actions would pass legal review.

“The governor has the authority and the duty to protect all of us and save lives, and this is what he is doing,” Tong said.

But Fishbein said not all the governor’s actions meet the test of reasonableness. He was one of a dozen members of the legislature’s Conservative Caucus who wrote to Lamont last week, acknowledging the need to slow the spread of the virus but objecting to the scope of his actions.

“The statewide shutdown you have imposed is unnecessarily putting an untenable strain on Connecticut businesses and institutions to the point that many will never reopen,” the caucus wrote.

Reale, whose party already is in court over ballot access, used far stronger language. The Libertarian accused the Democrat of assuming dictatorial powers by banning public assemblies, closing stores, limiting access to the courts and interfering with contracts between landlords and tenants, among others.

“This is a power play that is unknown in American jurisprudence,” said Reale, a paralegal by vocation. “We’ve never seen anybody grab this much power.”

His rhetoric was strong, but the protest Monday was mild. Participants drove around the State Capitol blowing horns, but no one challenged the governor’s restrictions on large public gatherings. There were no speeches, just messages scrawled on signs.

“I’m here to fight for us small business owners,” read one sign in the windshield of a white Ford Explorer, its driver ringing a bell held above an open sun roof. On the door was a commercial logo for Studio 44 Family Hair Care of East Windsor. 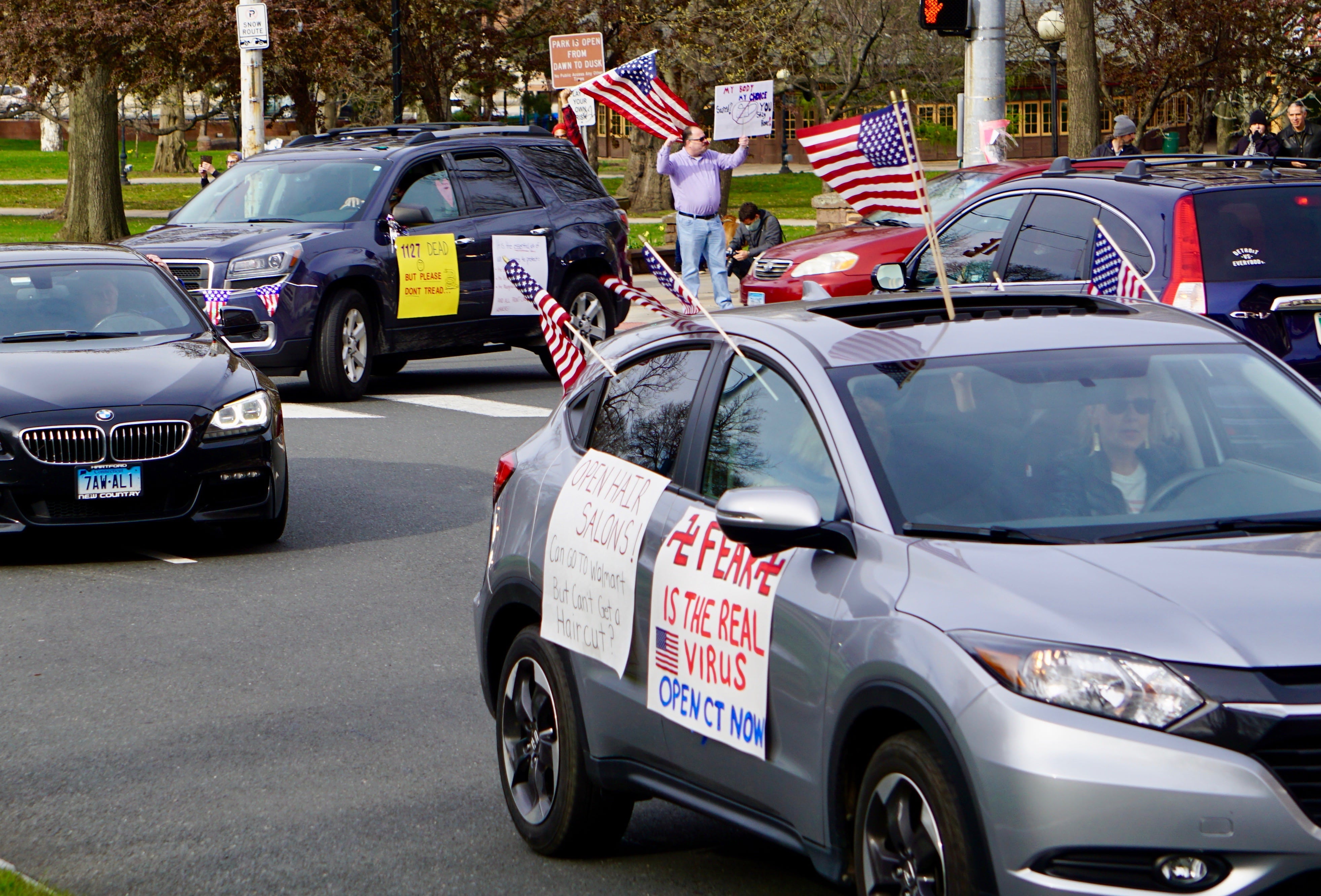 Protesters are calling on the governor to reopen the state for business.

One of the governor’s orders closed barber shops and hair and nail salons.

Some of the cars carried messages supporting President Donald J. Trump, even if the protest was organized by a Libertarian leader who sees the president and governor as both being incompetent.

Reale said Lamont should lift all restrictions on business, then resign.

“He’s proven himself, like the president, to be incapable of rational governing,” Reale said.

Trump has tweeted support of protesters in other states who have pushed their governors to lift restrictions, while conceding that the authority for doing so rested with governors and not him. In a Tweet on Monday, Trump said he would work with the states to improve testing, a step many governors say is necessary to safely reopen commerce.

A man on the sidewalk outside Bushnell Park applauded the parade Monday. He said the time had come to ease restrictions, particularly in eastern Connecticut, where there are relatively few cases or hospitalizations. He declined to give his name, as did others on the sidewalk.

Rep. J. Vincent Candelora, R-North Branford, one of the conservatives pressing the governor to reconsider the COVID-19 restrictions, said the protest was a healthy way for frustrated business owners and others to blow off steam and register their disagreement with the governor.

The governor’s press office had no comment on the protest or the threat of litigation. The governor has called his orders a thoughtful and necessary response to a pandemic that could have overwhelmed the state’s hospitals.

Lamont said Monday that hospitalizations in hard-hit Fairfield County are continuing to fall, but the crisis is not over as the number of confirmed cases continues to rise. Easing restrictions too quickly could produce a second wave of infections, he said.