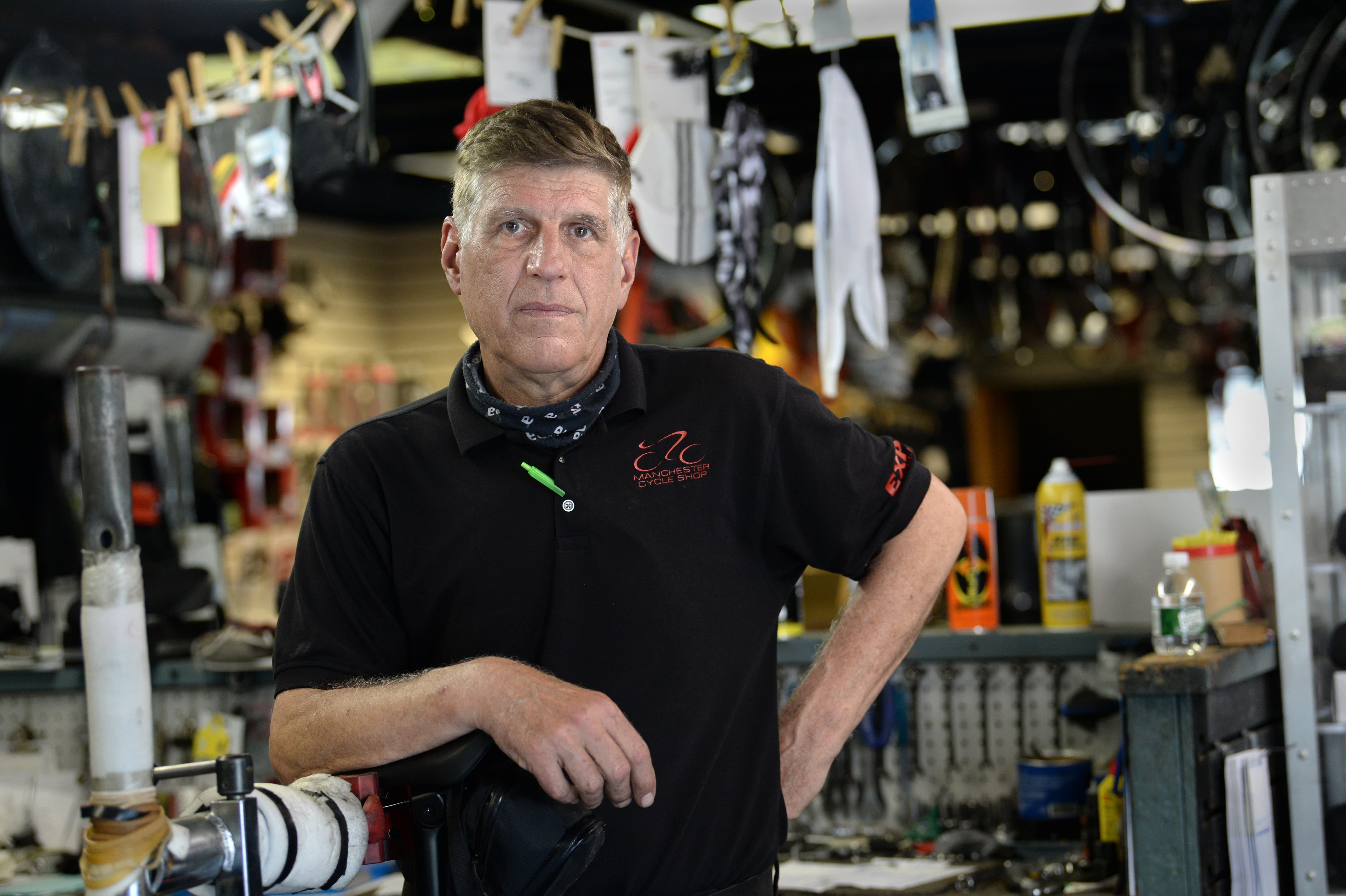 Bob Kiernan has owned Manchester Cycles, a bicycle shop, for 50 years. Because of the stay-at-home measures mandated by the state to stop the spread of COVID-19, Kiernan has seen a huge spike in business for new and used bikes and increased demand for repairs as people look for ways to exercise and get out of the house. Currently he has only 40 bikes available for sale while under normal conditions he would have about 250.

The coronavirus pandemic has been a disaster for thousands of small Connecticut businesses, but the impact of closures and work-from-home orders has created a massive sales boom for the state’s bicycle shops.

Adult recreational bike sales in March ballooned by 121% compared to the same month a year ago, Bicycling Retailer and Industry News reported.

The huge increase in demand for bicycles, nationally as well as in Connecticut, has also come at a time when bike shops are still open, having been deemed essential businesses, but pandemic-related factory shutdowns and work restrictions have created major supply chain problems.

“I’ve been in this business for 55 years,” Bob Kiernan, owner of Manchester Cycle Shop, said last week. “And I’ve never seen it this busy.”

“We’re totally sold out of bicycles,” said Kiernan. He’s also been inundated with repair requests from “people who are digging out old bikes they haven’t used in 10 years.”

Stanek and others link the dramatic surge in demand for bicycles to families looking to get their kids and themselves out of the house after weeks of the COVID-19 lockdown. 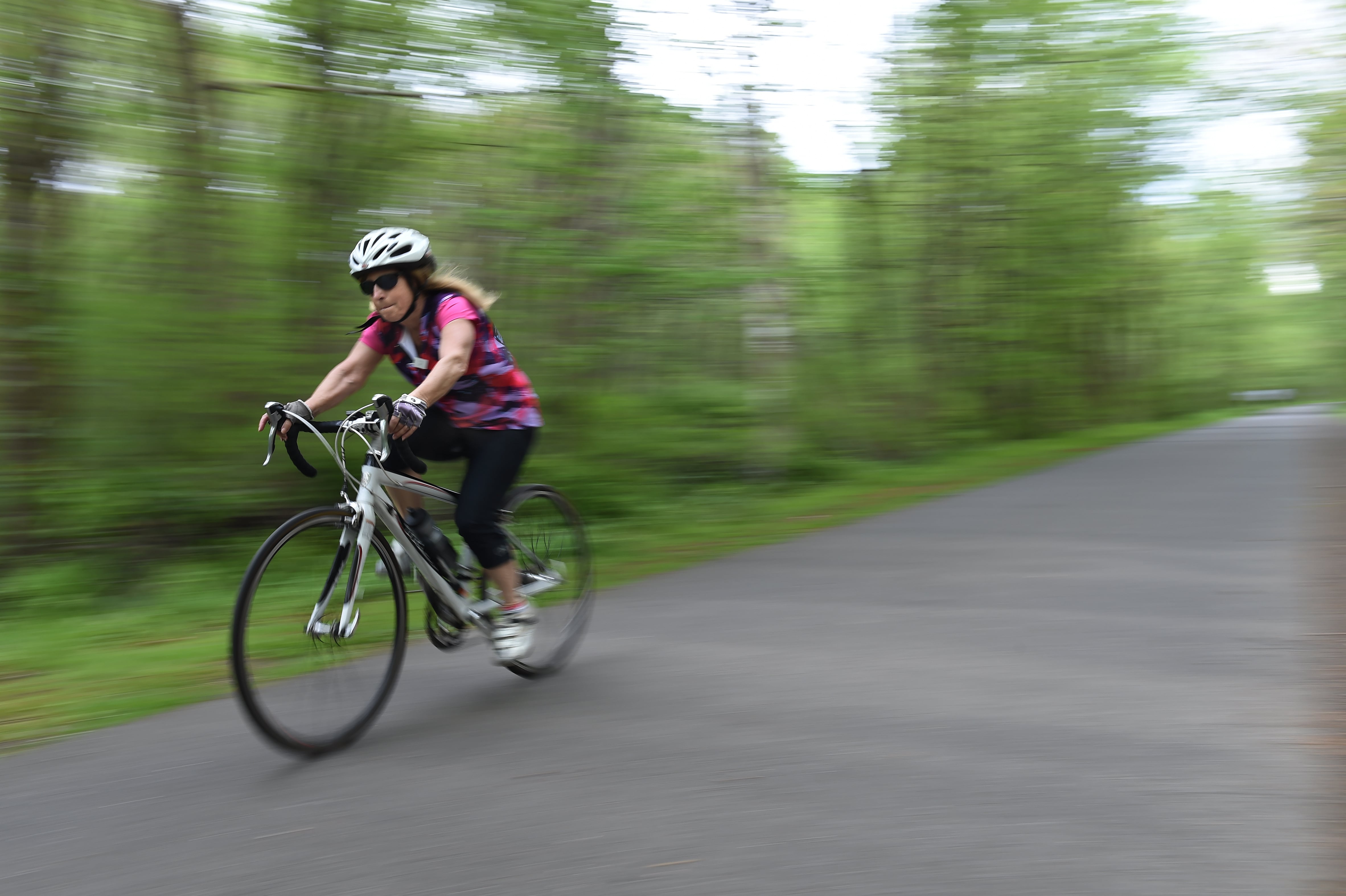 A bicyclist rides along the Farmington Canal Linear Park in Cheshire. Bicycle shops have seen a dramatic increase in demand for bicycles and repairs as people look for ways to get out and exercise during several weeks of stay-at-home and social distancing orders during the COVID-19 pandemic.

Early in the shut-down, it looked like bike shops wouldn’t be open.

When Gov. Ned Lamont first issued his executive order shutting down many businesses in March, they were not immediately considered “essential” services.

“There was significant advocacy to allow bike shops to remain open,” said Bill Young, president of BikeWalk Connecticut. He said biking advocates and shop owners pointed out that bicycles for some people – particularly in inner-city areas – are their primary form of transportation.

“Leaving bike shops out but auto dealers in [as essential services that could remain open] didn’t feel quite right,” Young said.

Owners aren’t complaining about the shift.

“In every calamity or disaster, some businesses are going to do well,” Stanek said.

A ticket to ride

The closure of schools, job losses and teleworking have left “people looking for ways to get out the house, looking for exercise for themselves and their kids,” Young said.

Fitness centers have also been shut down for months, which has sent “gym rats and spinners” looking for bikes as a serious exercise option, according to Bob Jacobson, owner of College Street Cycles in New Haven.

Young said a lot more people are also out walking these days, but that many see bicycling as the best solution for families trying to take advantage of the improving spring weather in a state with plenty of decent trails and winding back roads.

Or, as Stanek put it: “Bikes have always been great social-distancing machines.”

Bob Kiernan tunes up a bicycle in the back of his shop, Manchester Cycle.

A survey of 1,000 adults in the U.S. by Trek Bike found that, since the pandemic started, 85% of those surveyed consider biking to be a safer alternative to public transport because of social distancing concerns. The survey also found that 63% of Americans “feel bike riding helps to relieve stress/anxiety during the COVID-19 pandemic.”

Bike shop owners around the state say the greatest demand they are seeing is for kid’s bikes, hybrid bicycles and mountain bikes that are considered more user-friendly than drop-handled road or racing bicycles, mostly in the $400-700 range.

High-end road road and mountain bikes can cost thousands of dollars, but many new bicyclists find lots to like about those under $700. Hybrid bikes with straight handlebars, for example, allow riders to sit in a more upright position, have lots of gears to make pedaling on the hills easier, and can go from paved roads to most gravel or dirt bike trails with few problems.

The surge in demand for bicycles has also resulted in part from a shortage of indoor cycling trainers, experts say. Sales of those types of indoor exercise machines grew by 268% in March compared to March 2019, according to Bicycling Retailer and Industry News. Sales of stationary bikes, including more expensive ones like Peloton Bikes, have also taken off and are often as hard to find as regular bicycles.

For aspiring bikers struggling to find indoor or outdoor bikes, Ken McLeod, policy director for the League of American Bicyclists, suggests city bike-share services or getting a used bike. He said that in some cities around the U.S., organizations are actively seeking to provide bikes to front-line pandemic workers as an safer alternative to public transport during this crisis. Young said he wasn’t aware of any similar programs in Connecticut.

While the pandemic caused demand for bikes to spike, it also broke the supply chain. Most bicycles and parts sold in the U.S. are manufactured in Taiwan, China and other Far East Asian nations, McLeod and other experts say.

Bikes manufactured for the springtime sales season, Stanek said, are normally shipped in early January or February. This year, those shipments were delayed for weeks because of factory and transportation shutdowns to curb the spread of COVID-19 in Asia, he said.

Two bicyclists ride over a bridge along the Farmington Canal Linear Park in Cheshire on Monday.

“A lot of product is on the water right now,” Stanek said. He added that there appear to be more delays at ports and warehouses in the West Coast of the U.S. because of COVID-19 labor safety restrictions on the number of workers allowed on any one shift and other precautions.

Kiernan is adapting by “pre-selling” bikes that aren’t expected to arrive until June or July.

One of the biggest bicycle brands that shops like Kiernan’s sells is Wisconsin-based Trek Bike. Kiernan said he had one customer who claimed to have contacted virtually every Trek dealer in New England looking for a particular model of bike and all were sold out.

Eric Bjorling, director of brands for Trek Bike, said that the bicycle supply chain “was disrupted in January and February.”

“But the good news is … that a lot of product is now coming into this country,” Bjorling said.