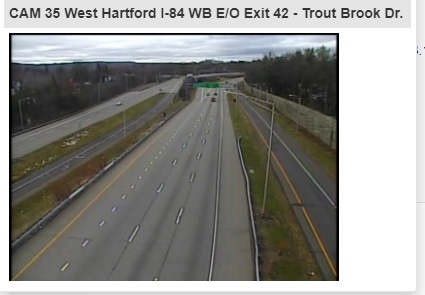 If you are still getting meeting or appointment notices on your phone, the chances are very good that they include the advisory: “The traffic is light.”

Your phone has this one right.

Since the onset of the coronavirus pandemic and all of the attendant precautions, traffic on the state’s major roadways has dropped off precipitously, particularly on weekends. Data compiled by the State Department of Transportation show that from early March through the end of the month, traffic volume on most roads was down 40 to 50 percent on weekdays and as much as 70 percent on weekends.

“We knew that [traffic] volume was way down, but it was still a shock to see the numbers. It brings it home that this is very serious,” said Brad Overturf, a DOT supervising planner.

On the plus side, the drop in weekend traffic, when much driving is discretionary, may indicate that people are getting the message to stay home, said Tom Maziarz, DOT’s Chief of Policy and Planning.

The department developed a data tool or dashboard showing daily traffic volume at 15 representative locations — of 39 they monitor — around the state. The counts come from sensors embedded in the roads that operate around the clock.  The result show a consistent pattern. 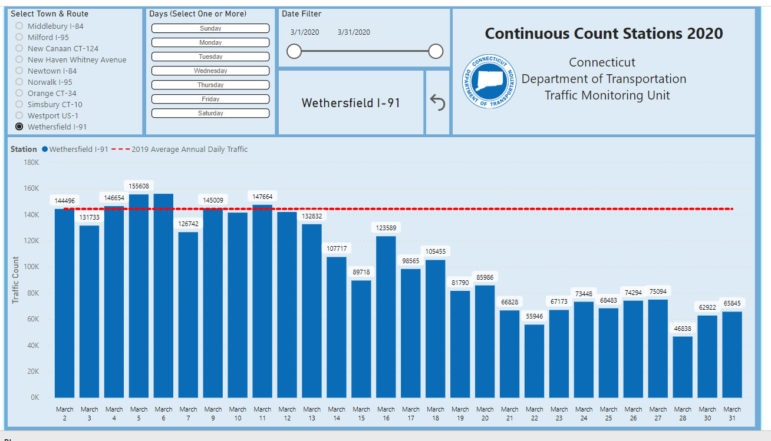 A peek at the DOT’s highway count dashboard.

The data suggest that weekend motoring began to decline slightly before weekday driving, but that both dropped precipitously after the middle of the month, as the dangers of virus transmission became better known and officials began encouraging residents to stay home. Gov. Ned Lamont’s “Stay Safe Stay Home” executive order halting nonessential travel and business went into effect on March 23.

The drop in weekend driving indicates that “people are hunkering down, they are taking this seriously,” Maziarz said. He said the data could be useful in a number of ways, from climate and economic trends to research into crashes. Yale researchers are using it and other transportation data to determine if there is a correlation between travel in and out of Connecticut from New York and Massachusetts and COVID-19 cases in New Haven, said Mike Wang of Yale Medical School in an email. 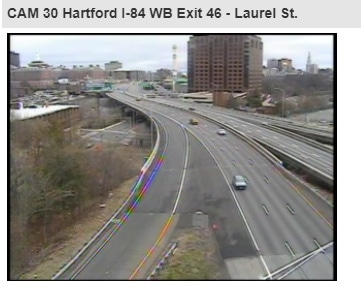 Traffic reduction also is allowing the DOT to expedite construction projects, by closing lanes when necessary or shifting what had been night work to the daytime, eliminating the pay differential for night work. “We can do more work in less time and save money,” said Maziarz.

Another plus, being measured over much of the world during the pandemic, is improved air quality.  Motor vehicles are a “major source of air pollutants that affect human health, “ according to the U.S. Department of Transportation (see here). Fewer vehicles mean less pollution. Connecticut’s Air Quality Index on Friday was Good, the highest rating.

There is one downside of the traffic reduction: speeding has increased. The DOT also monitors highway speeds, including at its work zones. “We know speed is up,” Maziarz said.  Speed is a factor is about a third of highway fatalities, according to the National Highway Safety Administration.