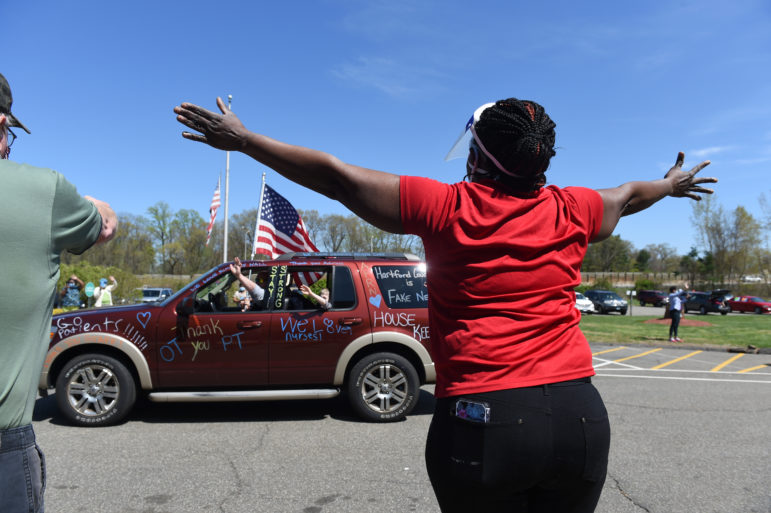 A health care worker at Kimberly Hall North waves to supporters as they show their appreciation to workers at the skilled nursing facility with a drive-through tribute.

The report also showed COVID-19 deaths and infections among nursing home residents grew at slower rates for the fourth consecutive week as Connecticut tries to contain the pandemic.

“We again express the importance of understanding that the spread of COVID-19 is a reflection of the pernicious character of the virus and is in no way a reflection of the quality of the health care facility – or the care it provides,” representatives of the assisted living and nursing home facilities wrote Friday in a joint statement. “The ongoing and extraordinary efforts of the employees of Connecticut’s nursing homes and assisted living communities in this battle against COVID- 19 must be recognized.”

Morelli, Barrett and Carter also warned that social distancing to protect the elderly has become more crucial since Lamont expanded allowable business activities on May 20. “All Connecticut residents can play a critical role in protecting nursing homes and assisted living communities by doing what they can to contain the community spread of the virus,” they wrote.

A total of 2,190 nursing home residents have died from the coronavirus, including 263 between May 14 and May 20 — the period covered in the latest report. That’s an increase of 13.4%.

Infections also are growing at a slower pace in nursing homes.

The latest report says another 928 residents became infected between May 14 and May 20, bringing the total for the pandemic to 7,875. That’s an increase of 13%.

Several nursing homes have reached the triple digits for infections among residents.

Arden House in Hamden recorded the most, with 170 COVID-19 cases. Litchfield Woods in Torrington logged 127. Riverside Health and Rehabilitation Center in East Hartford and St. Joseph’s Center in Trumbull had 121 cases each. And Silver Springs Care Center in Meriden had 120.

Riverside Health logged the most deaths – with 57. Kimberly Hall North and Abbott Terrace has 43 each, and Shady Knoll Health Center in Seymour had 35.

Lamont administration officials said more than a week ago that they planned to release statistics on nursing home residents who had recovered from the coronavirus, but no data on that has been provided to date.

State health officials haven’t been tracking coronavirus cases as long in Connecticut’s more than 130 assisted living facilities. These centers serve residents age 55 and older who need some assistance with daily living activities but not the skilled care provided by a nursing home.

The latest report found 306 assisted living residents spread among 79 centers have died from COVID-19 since the pandemic began.

That’s an increase of 30 deaths, or 11%, from the 276 fatalities reported by 74 assisted living facilities through May 13. The state did not report coronavirus-related deaths in these managed-care communities before that.

Ridgefield Crossings in Ridgefield has recorded the most deaths among assisted living facility residents, with 26, since the pandemic began. Spring Village at Stratford has had 14 fatalities and The Village at Buckland Court in South Windsor and Maplewood at Danbury each have recorded 13.

Ridgefield Crossings also recorded the most cumulative cases, 49, through the latest report. The Village at Buckland Court has logged 38 cases since the pandemic began, and Spring Village at Stratford and The Village at East Farms in Waterbury each have reported 35 cases.

The Lamont administration had released two earlier reports on the coronavirus in assisted living centers— on May 6 and on April 29. But health officials acknowledged those reports, which showed infection totals ranging from 506 to 662, were flawed.