Figures released for the first time Thursday show the coronavirus has struck hard in Connecticut’s assisted living facilities, infecting 874 residents and claiming the lives of 276 since the pandemic began.

Thursday’s report from Gov. Ned Lamont’s administration also showed another 300 COVID-19-related deaths among nursing home residents over the past week, bringing that total to 1,927.

Deaths among this group rose 15% between May 6 and May 13 — the third consecutive week that fatalities grew at a slower pace.

“Today’s released data shows that the deadly virus still has hold on our Connecticut nursing homes,” representatives of the assisted living and nursing home facilities wrote Thursday night in a joint statement.

“Like nursing homes, it is important to understand that the spread of COVID-19 is a reflection of the pernicious character of the virus and is in no way a reflection of the quality of the assisted living facility or the care it provides,” added Mag Morelli, president of Leading Age Connecticut; Matthew Barrett, president of the Connecticut Association of Health Care Facilities; and Christopher Carter, president of the Connecticut Assisted Living Association. “Assisted living communities are vibrant, active communities, but still the people they serve are typically more vulnerable to the virus … just as nursing homes residents are.”

The latest report includes data on 75 assisted living facilities, with a collective 6,890 beds, affected by the coronavirus. It does not identify how many residents are in those communities. The 276 deaths represent 4% of the residential capacity of these 75 centers.

Connecticut has more than 130 assisted living facilities. A spokesman for the Department of Public Health said those not listed in Thursday’s presentation have reported no cases of the coronavirus.

The Lamont administration has struggled to collect coronavirus-related data from assisted living facilities, which serve residents age 55 and older who need some assistance with daily living activities but not necessarily the skilled care provided by a nursing home.

Ridgefield Crossings in Ridgefield recorded the highest number of confirmed and probable COVID-19-related deaths among assisted living facilities, with 26.

Spring Village at Stratford logged 14 probable and confirmed fatalities. The Village at Buckland Court in South Windsor had 13 deaths. And two facilities – Maplewood at Danbury and The Atrium at Rocky Hill – each recorded 12.

While the majority of assisted living centers reported death tolls in the single digits, the number of confirmed COVID-19 cases at many facilities reached the double digits.

Ridgefield Crossings also recorded the highest number of residents infected with the disease – 49. The Village at Buckland Court logged 37 COVID-19 cases, and Spring Village at Stratford and the Village at East Farms in Waterbury each had 35. Benchmark Senior Living at Hamden and The Linden at Woodbridge both reported 32 cases.

The state doesn’t regulate assisted living facilities; it regulates the agencies that provide medical services to residents of these managed-care communities. And though nursing homes have been reporting COVID-19 data weekly since early April, a parallel system for assisted living communities took longer to assemble.

But after an outbreak forced state and local health officials to dispatch additional medical personnel to Spring Village at Stratford on April 18 and 19, Lamont ordered these centers to disclose pandemic-related health statistics weekly to the state.

The initial reports, compiled April 23-29 and April 30-May 6, offered no data on assisted living residents who had died from the coronavirus. And these reports — at least partially —  were statistical snapshots in time, rather than tallies reflecting cumulative data, as the nursing home reports have done.

For example, the first assisted living report included data from 54 facilities and found that 662 residents either had tested or were presumed positive for COVID-19.

The second report included data from 62 facilities and found 506 residents who fell into these categories.

State health officials, meanwhile, acknowledged that some medical service agencies were late in filing, or were missing data.

The new report also shows the pandemic continues to press Connecticut’s 213 nursing homes, but deaths and infections are increasing at slower rates.

While total deaths among these residents increased 15% in the latest report, they had grown by 30% during the week that ended May 6, by 63% through April 29 and by 105% through April 22.

Similarly, infections also are growing at a slower pace in nursing homes.

Nursing homes that had previously recorded some of the highest numbers of cases and deaths continued to do so in the latest round of data. 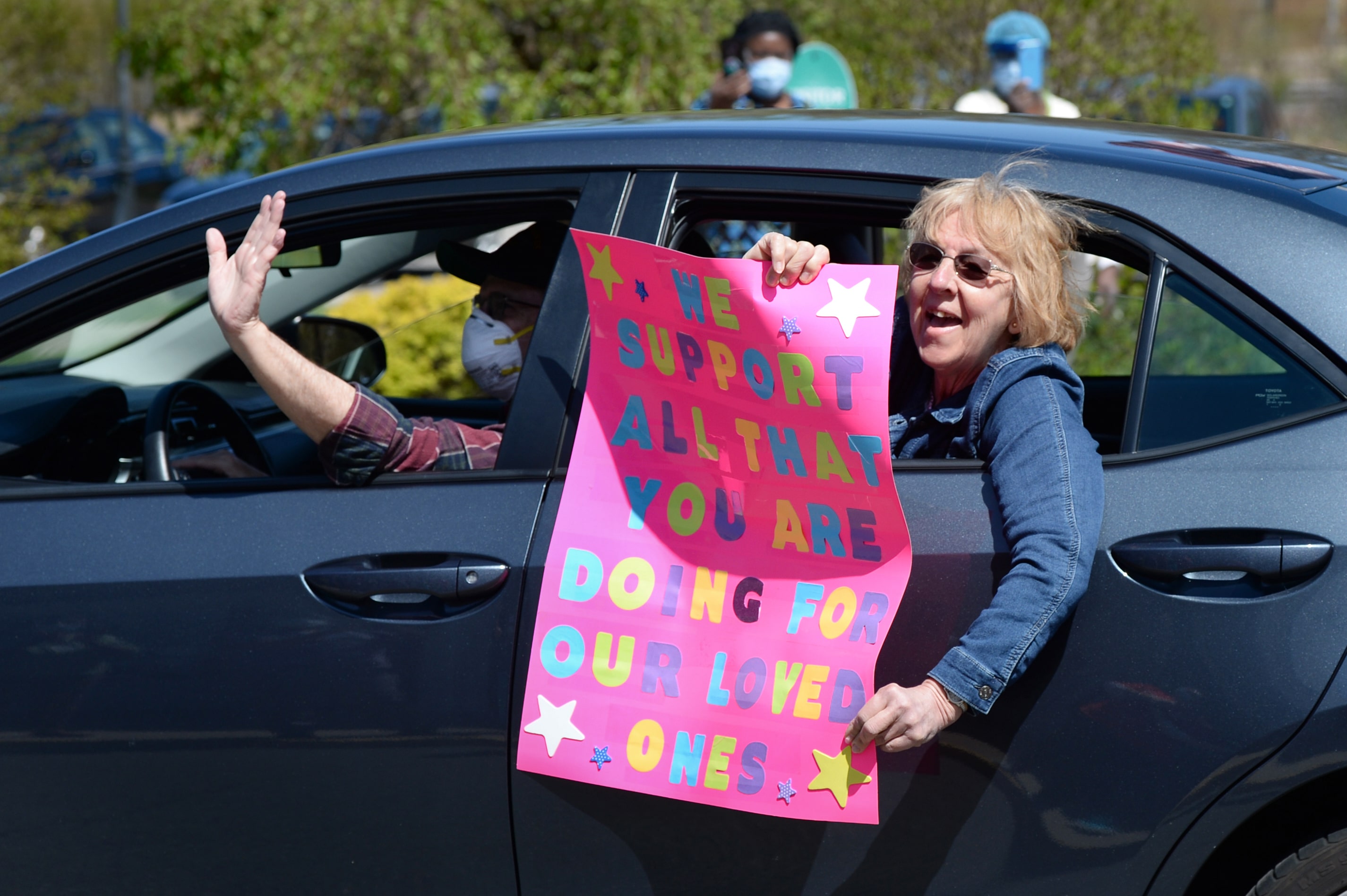 A supporter of the health care workers at Kimberly Hall North show their appreciation for their work at the skilled nursing facility with a drive-through tribute on a recent Tuesday afternoon. The facility has been particularly hard hit with the COVID-19 virus.

Riverside Health & Rehabilitation Center in East Hartford logged the most confirmed and presumed COVID-19-related fatalities, with 54. Kimberly Hall North in Windsor had 43 deaths, while Abbott Terrace Health Center in Waterbury recorded 41 and Shady Knoll Health Center in Seymour had 35.

Five homes reported more than 100 cases: Litchfield Woods in Torrington with 127, Silver Springs Care Center in Meriden with 116, Abbott Terrace with 115, Riverside Health with 111, and Branford Hills Health Care Center in Branford with 100.