COVID testing in the cities? The messenger is as important as the message. 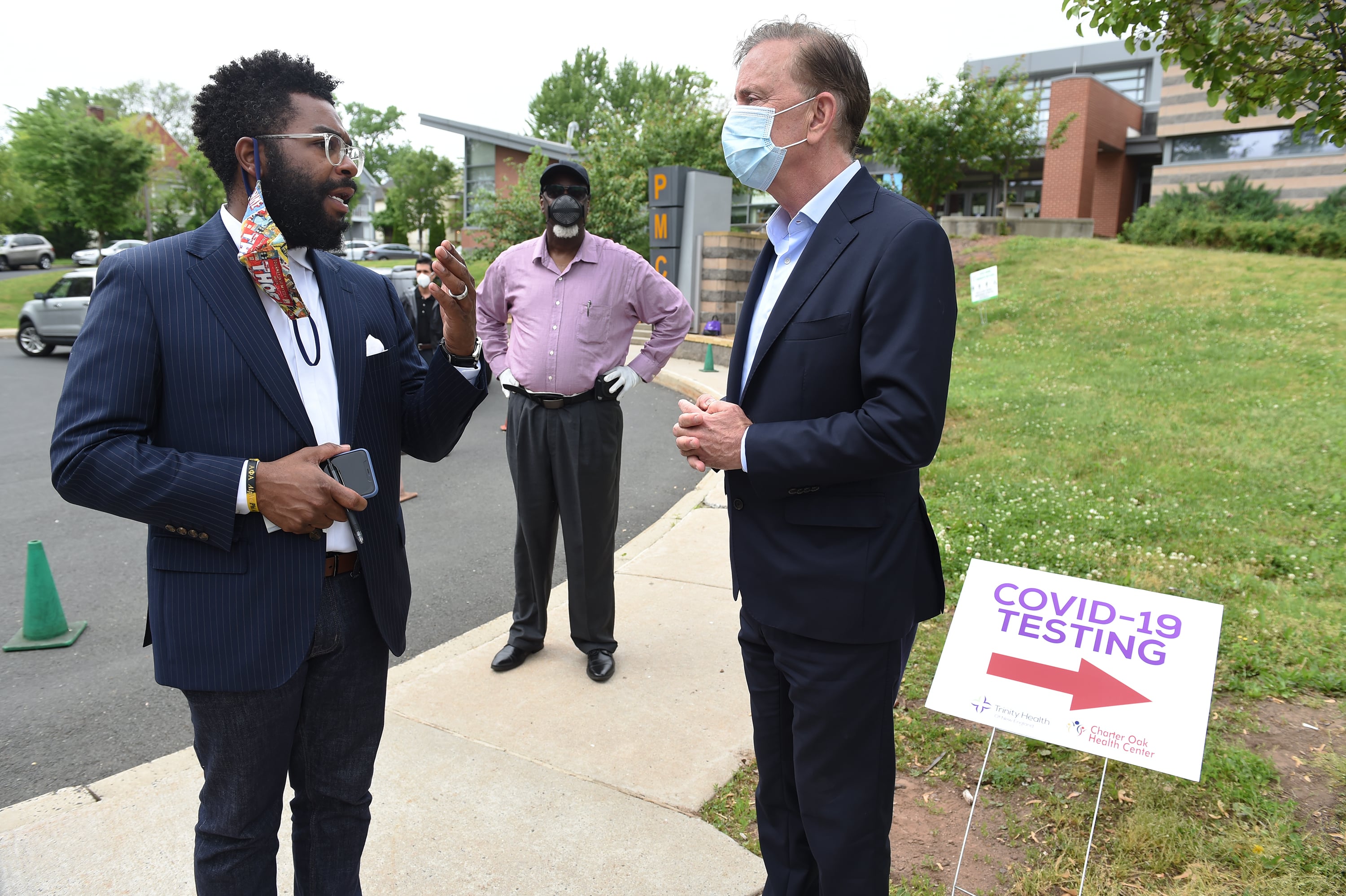 Hartford — Steve Harris is hard-wired into his community. He is a retired Hartford firefighter, former city councilman and current Democratic Town Committee member who lives in the city’s North End and knows its pulse, quirks and personalities.

But he was surprised Thursday when a man from the predominantly black neighborhood asked why medical personnel and the media were outside the Parker Memorial Community Center. The governor, mayor and others were there to publicize a partnership expanding COVID-19 testing in Hartford.

“I told him, ‘It’s free. Why don’t you go down there and get tested?’ He literally stopped and said, ‘I’m not letting those folks give me the needle,’” Harris said. “‘I said, ‘There is no needle. It’s safe.’ He literally turned around and walked back. He was adamant there was some kind of conspiracy taking place.”

As the availability and convenience of testing increases, public health officials are faced with another challenge: How to combat misunderstandings about who should be tested and what it costs, plus a smaller strain of those influenced by rumors about the novel coronavirus and testing — everything from a belief blacks are immune to a suspicion the virus is being deliberately spread.

“There are a lot of conspiracy theorists out there just putting out all types of information on YouTube. It’s crazy,” said Rep. Brandon McGee, D-Hartford, the leader of the legislature’s Black and Puerto Rican Caucus.

Polling shows that the vast majority of African-Americans and Latinos take seriously the threat of COVID-19 — even more so than whites, according to the Pew Research Center. But another survey by a Yale-affiliated group, the Equity Research and Innovation Center, found that blacks believe by a 2-1 margin that they are less likely than whites to be offered testing or admitted to hospitals for COVID.

Two weeks after McGee and others complained of a paucity of testing in Connecticut’s urban centers, he says now the greater problem is finding trusted voices to deliver the message that testing is safe, important to community health, readily available and free.

Trinity Health of New England, the owner of St. Francis Hospital and Medical Center in Hartford and three other acute-care hospitals, and the Charter Oak Health Center, one of the state’s 17 federally qualified health centers, completed the third day of mobile testing on Thursday.

There is no copay for the insured and no charge for the uninsured.

Hartford HealthCare, whose flagship is Hartford Hospital, also is conducting mobile testing. In late April, the hospital tested every resident and staff member at the Open Hearth, a men’s shelter. More recently, it partnered with a church and community groups, offering testing at a church in the North End and a school in the South End, drawing 300 people on each of three days. 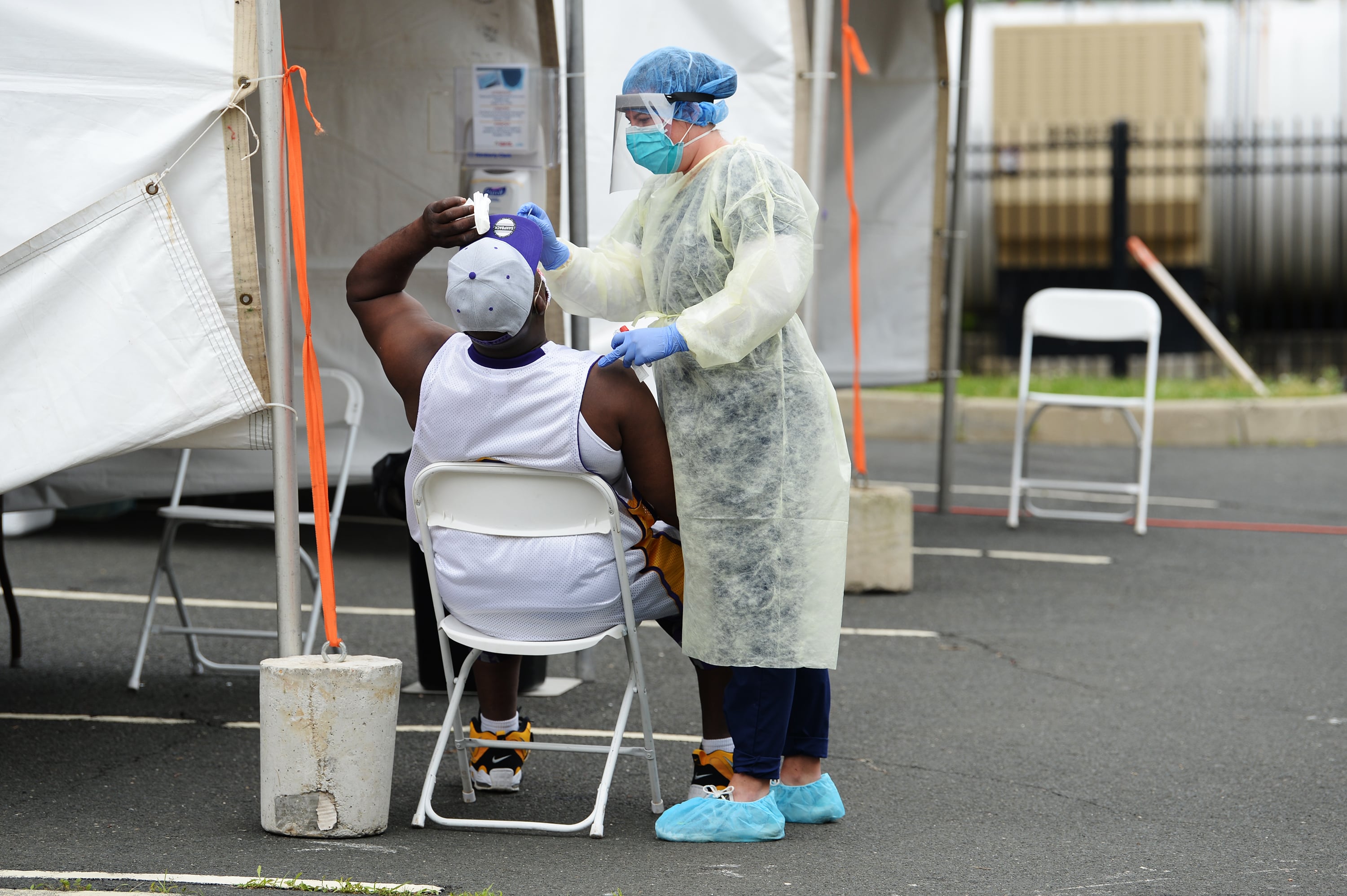 A North End resident gets tested for COVID19 at a pop up testing site at the Parker Memorial Community Center in Hartford Thursday. It is the start of a new a mobile testing program through a partnership between Trinity Health of New England and the Charter Oak Health Center. The walk-up testing sites will pop up throughout the city three days a week starting this week to facilitate more testing for the virus.

Gov. Ned Lamont said demand for testing at many urban sites fell far short of capacity, an indication the state and the testers need to do more marketing. New Haven has the highest rate of testing, but some mobile sites have attracted fewer than 40 clients.

Trinity and Charter Oak averaged 100 tests a day in their first three days at sites around Hartford, including 104 on Thursday at Parker Memorial, said Kaitlin Rocheleau, a spokeswoman for Trinity.

As of Thursday afternoon, the state had reported 271 new coronavirus cases and an additional 5,756 tests. About 650 people are currently hospitalized with the disease and the state reported 23 more COVID-19-related deaths, bringing the overall number of people killed due to virus complications to 3,826.

Data on infections and deaths in nursing homes and assisted living facilities were not released Thursday afternoon, as previously scheduled.

In an email, David Bednarz, a spokesperson for the governor, said the report “is being delayed one day to provide some more time to finalize the data.” 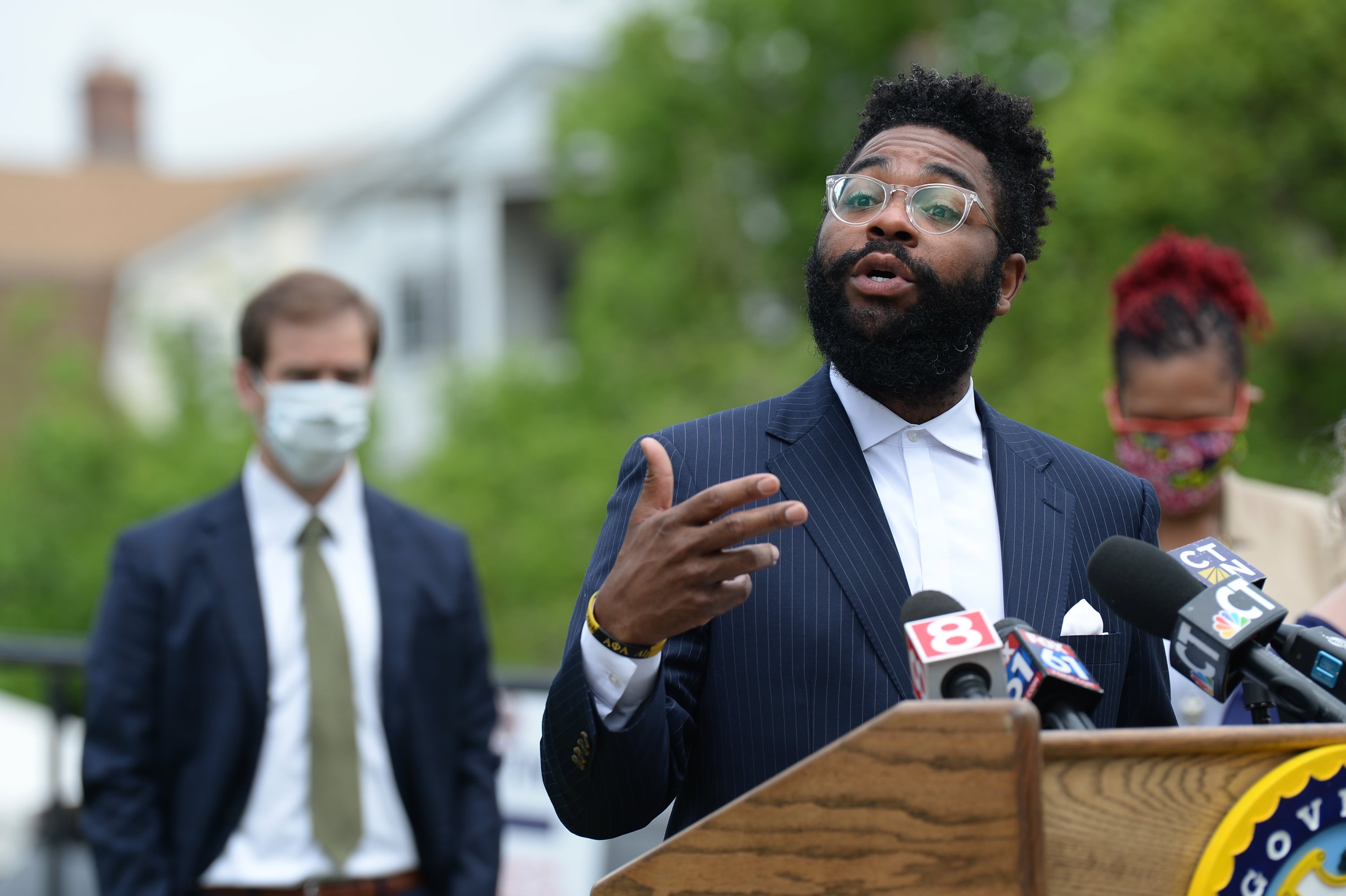 State Rep. Brandon McGee Jr. at a press briefing outside the Parker Memorial Community Center in Hartford. At left is Mayor Luke Bronin and at right is Nichelle Mullins, the CEO of theCharter Oak Health Center. Charter Oak and Trinity Health of New England are jointly offering mobile testing for COVID-19.

The cities and their communities of color have been hit hard by the virus, though racial data in Connecticut is incomplete. The state is among the worst in the number of test results reported to the state without demographic data.

“You have more multi-generational living. You have more dense living, more apartments,” Bronin said. “You have more difficulties social distancing at home. You have a higher number of people who are in jobs that have been deemed essential.”

“And there is no question that you have the legacy of generations of health disparity.”

Bronin said one of the challenges in convincing residents to get tested is the shifting message about who should get tested. At the beginning of the pandemic, testing was limited to the gravely ill; now, testing is available to asymptomatic persons in high-risk communities.

He said some may be reluctant to get tested for fear they will incur a medical expense.

Blumenthal, who was tested Wednesday at a pop-up site on the New Haven Green, said he believes privacy is a concern — even if it shouldn’t be.

McGee said another challenge is the internet: Some groups rely too heavily on social media to publicize the availability of testing, a problem in neighborhoods where web access is far from universal.

“Here’s the challenge: We’re building this plane when we’re flying. Nine times out of ten, more than half the residents — the residents in this neighborhood — are like, ‘What’s happening?’ “ McGee said.

Bronin said the messenger can be as important as the message.

“I think when you hear from somebody, a government official, somebody like me, or from a hospital exec, that you’re not going to have to pay, you’re not going to get stuck with a bill, that there is not going to be some unintended consequences of getting a test, you might believe it,” Bronin said. “But if you hear it from the FQHC [clinic] where you get your primary health care you might trust it in a different way.”

“If you want people to buy in, you have to have people from that neighborhood,” Harris said.

McGee said the Black and Puerto Rican Caucus is willing to help with outreach.