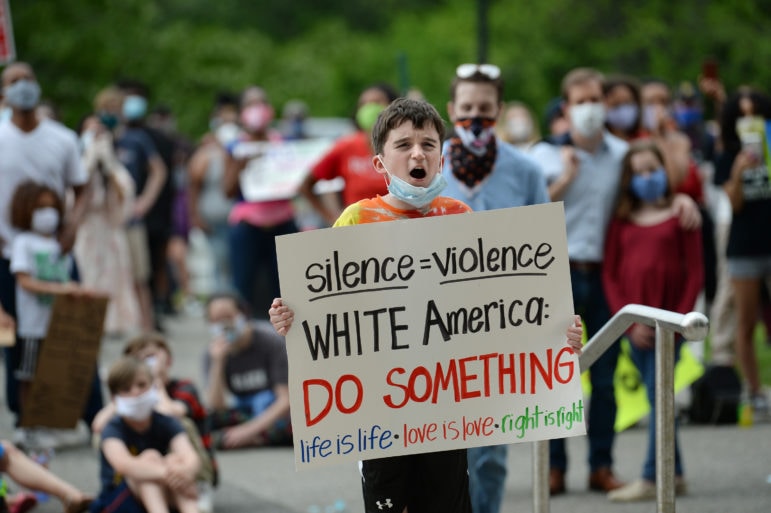 A young protestor chants during a rally at the state Capitol Friday in response to the killing of George Floyd in Minneapolis at the hands of police on Memorial Day. Several hundred people attended the event to stand together against police brutality, abuse of power and racial discrimination.

Of all the agonizing final moments of George Floyd’s life, as he gasped for air from beneath a police officer’s knee, the most painful for Barbara Sands was when he called for his mother. It reminded her of her son Kyron, who police killed in Windham in February 2019 following a car chase and a shootout.

“I wonder, did my son cry out for me?” Sands asked.

Floyd’s death Monday has inspired large-scale protests across the country. Though the 46-year-old died more than 1,300 miles away at the hands of a police force different from the one that took her son’s life, Floyd’s death still brings up traumatic memories for the Sands family, and for communities of color here.

“It opens up wounds,” Sands said. “Not even as black people — as human beings, we have to do more.” 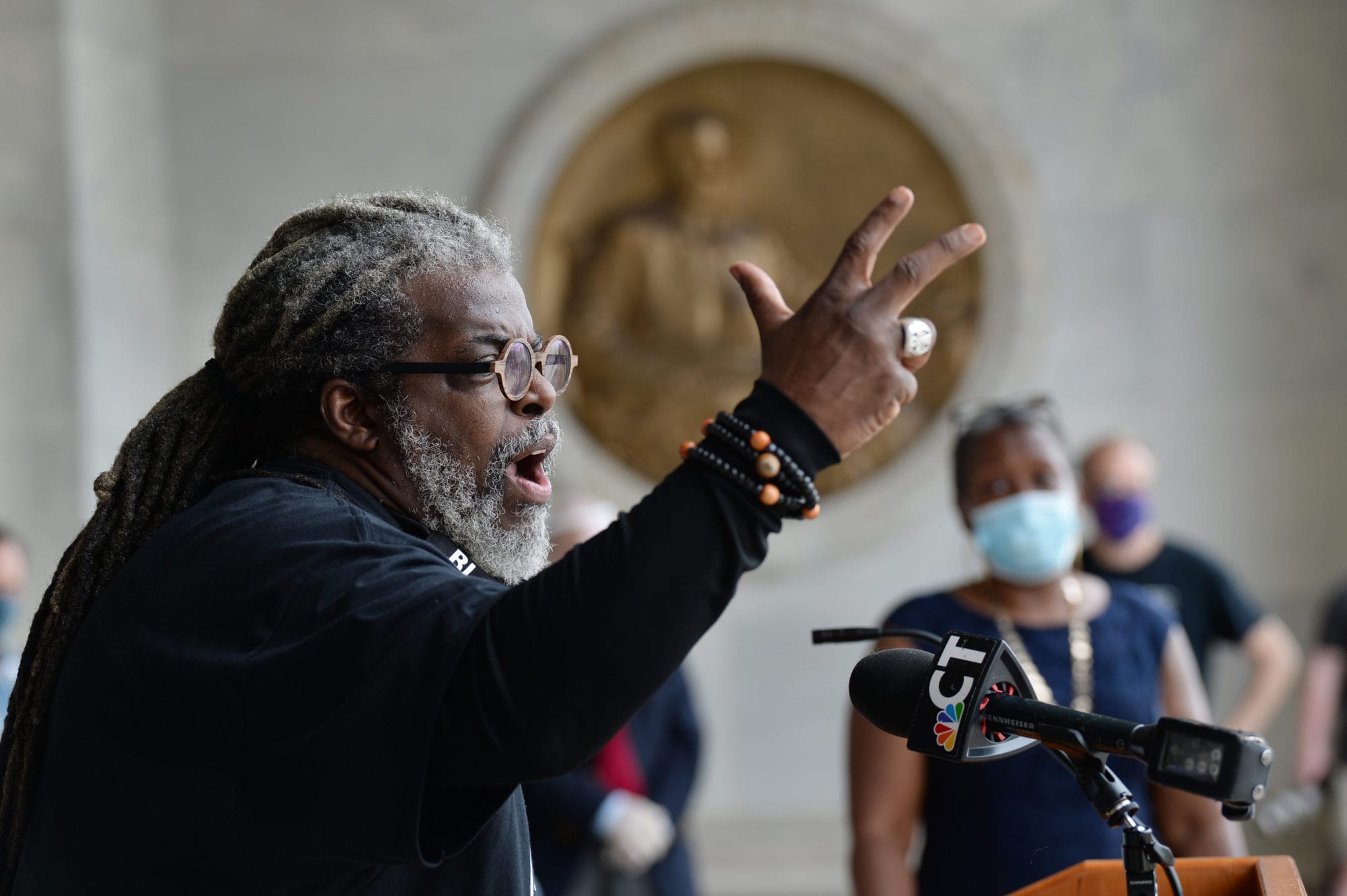 Bishop John Selders, co-founder of Moral Monday CT, speaks to a large gathering of protesters at the state Capitol Friday afternoon.. Several hundred people attended the event to stand together against police brutality, abuse of power and racial discrimination.

By community organizer Kerry Ellington’s count, at least five people in Connecticut have either been killed by police or died in their custody since the beginning of 2020. Ellington sees a connection between the demonstrations in Minnesota and similar rallies in recent years after the deaths of people like Jayson Negron, 15, in Bridgeport; Anthony “Chulo” Jose Vega Cruz, 18, in Wethersfield; and Mubarak Soulemane, 19, of New Haven.

“The relationship is one of a growing mass movement of people who are sick and tired of having their rights violated, their citizenship violated over and over and over again,” Ellington said.

Longtime activist Barbara Fair understands the rage behind the demonstrations in Minneapolis. She gets why those in mourning burned down the police department; she cried when she saw it on television this morning.

“It’s infuriating to keep seeing this happen over and over again,” Fair said. “It’s like a constant message that our lives don’t matter.”

Referencing a 1960s Miami police chief who threatened black neighborhoods from engaging in civil uprisings, President Trump tweeted just before 1 a.m. Friday that, “when the looting starts, the shooting starts” and castigated the Minneapolis mayor for being “very weak.” He also called protesters “thugs.”

“They don’t see the root cause of any of this: it’s because it’s constantly happening and nothing comes out of it at the end.”

Focusing on property damage misses the point of the demonstrations, Fair said. Lamenting damages to buildings overlooks the loss of life, and the perpetual injustices experienced by Americans of color.

“They can’t see beyond the actions,” Fair said of those who don’t understand the mass gatherings and judge them for the damage inflicted upon storefronts. “They don’t see the root cause of any of this: it’s because it’s constantly happening and nothing comes out of it at the end.”

Derek Chauvin, the police officer who knelt on Floyd’s neck for eight minutes before he died, was arrested Friday and charged with third-degree murder and manslaughter. It took just four days for Chauvin to be charged.

To Ellington, developments like that are a direct result of protests. “Civil disobedience is the strongest tool that we have to amass the speediest change that we need.”

A moment of silence for Floyd 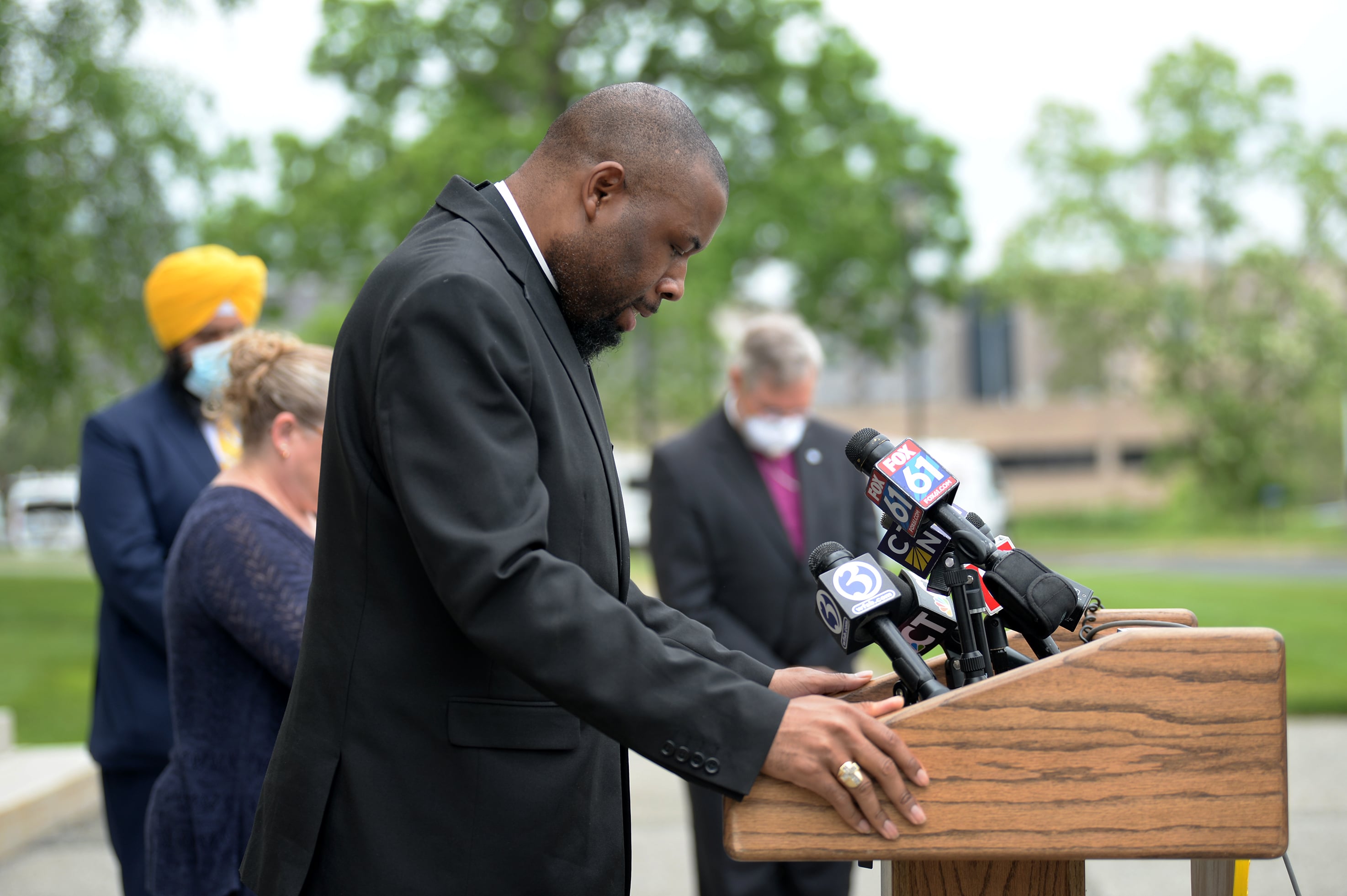 Kelcy G. Steele, pastor of AME Zion Church in New Haven, bows his head during a moment of silence for George Floyd, the African-American man who was killed by police in Minneapolis last Monday.

Outside the State Capitol, a briefing Friday by Gov. Ned Lamont and clergy about COVID-19 guidelines for worship quickly turned to Floyd, the riots in Minneapolis, Minn., and what it means for communities of faith.

The governor and clergy, a mix of men from different faiths and races, observed a moment of silence.

The Rev. Kelcy Steele, the first to speak, laid blame at the feet of President Donald J. Trump.

Steele is the pastor of the 3,000-member Varick Memorial A.M.E. Zion Church in New Haven, the second oldest church in the black religious denomination founded in the early 1800s.

“There is something that has been on my heart and my spirit. As we are talking about COVID-19, there is another virus that is plaguing the faith community. And while we are gathered, I feel like talking about that — and that is racism 45,” Steele said, referring to the president. “And so I can’t stand here without bringing up the name George Floyd.”

According to his bio, among Steele’s studies was a certificate course he took at Emory University, “From Freedom Rides to Ferguson: Narratives of Nonviolence in the American Civil Rights Movement.” He didn’t mention the course, just the way that the history of racism always is close.

“This black, unemployed man didn’t deserve to die. The way he died is senseless. He begged for his life. He pleaded for his life,” Steele said. “And when you try so hard to put faith in this system, a system that you know isn’t designed for you, it’s sad we still have to talk about race in this day and time, in this climate, as well as in this pandemic.”

Steele said the rush by some to once again worship in churches should not overwhelm the greater mission of what it means to be a church.

“I feel like it’s time for us as a faith community to be the church. Speak the truth. Stand for those who have no voice,” he said. “And so I want to just stop and pause and lift up that name, sacred pause, of George Floyd. If we could just bow our heads, just for a few moments.”

Lamont and the other clergy remained silent. Most bowed their heads.

“Because George Floyd, he could have been me. George Floyd, he could have been you,” Steele said. “And he represents those in our communities who are trying to make it in society where racism, classism and anti-Semitism has taken its sheets off and has received permission from those that occupy the White House  that it is alright to parade prejudice even you have a badge. 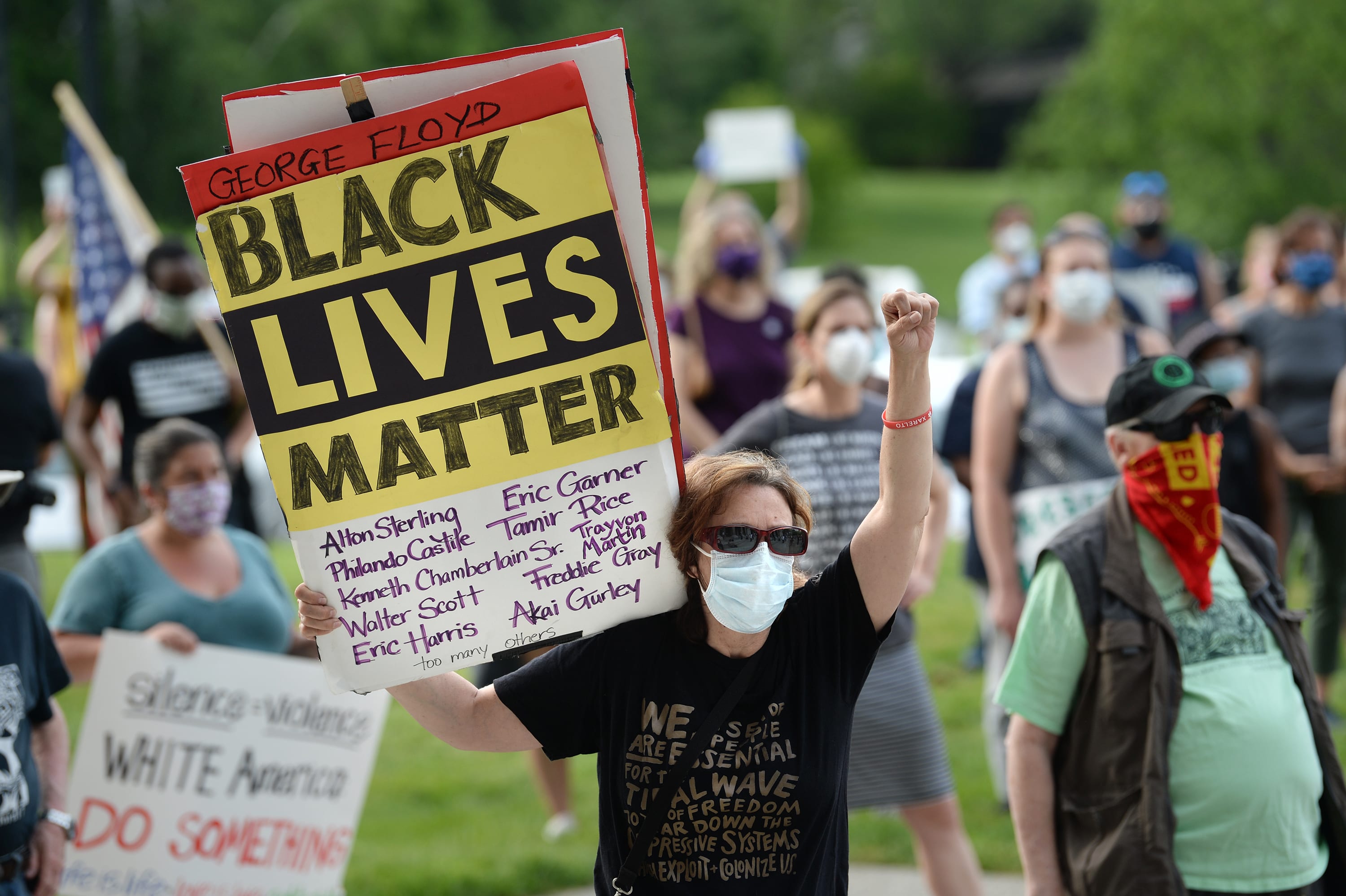 A protestor holds a Black Lives Matter sign at a rally to protest the Memorial Day killing of George Floyd in Minneapolis at the hands of police at the State Capitol Friday afternoon. Several activist groups were represented as well as several state legislators to stand together against police brutality, abuse of power and racial discrimination.

On Thursday night Gov. Ned Lamont participated in a tele-town hall with the state legislature’s Black and Puerto Rican Caucus, where he spoke briefly about the Minnesota police killing.

“I need your help in recruiting people in law enforcement, recruiting judges,” Lamont told legislators. “I’d urge you to use your networks to do everything we can to make sure we have a police force that reflects the diversity of our amazing state.”

Fair is skeptical that merely recruiting a more diverse police force will lead to meaningful change. Training for the job, in her mind, tends to change a person’s outlook, making them more a member of the blue brotherhood than someone from an under-resourced neighborhood.

“When they go through the academy and they become blue, that doesn’t help our community,” said Fair. “We have to dismantle this entire system from the ground up…  so that it’s equitable for everyone.”

The Black and Puerto Rican Caucus has been focused on diversifying Connecticut police forces and courtrooms for a long time, said Sen. Gary Winfield, co-chair of the Judiciary Committee and a New Haven Democrat.

“The systems that are in place are longstanding and resistant to change. If you want to change them, you have to make real change,” Winfield said. “And real change means police accountability.”

Winfield has been protesting police violence since he was 18. His activism led him to politics, where he has passed several bills over the years in an effort to hold police accountable and make their instances of misconduct more transparent.

“My role is to speak clearly and to say to people who are in positions like the governor have a responsibility, and that responsibility is not to ask us to provide the answers,” said Winfield, who joined Senate Democrats and elected officials across the state who took the time Friday to publicly mourn Floyd. “The responsibility is to look at the system and the things that are wrong with the system, and make change.”

It is also the responsibility of those in power, Winfield said, to listen to those reeling from the violence of police killings, and then act. “It’s almost mind-boggling that we can be having these conversations over and over.”