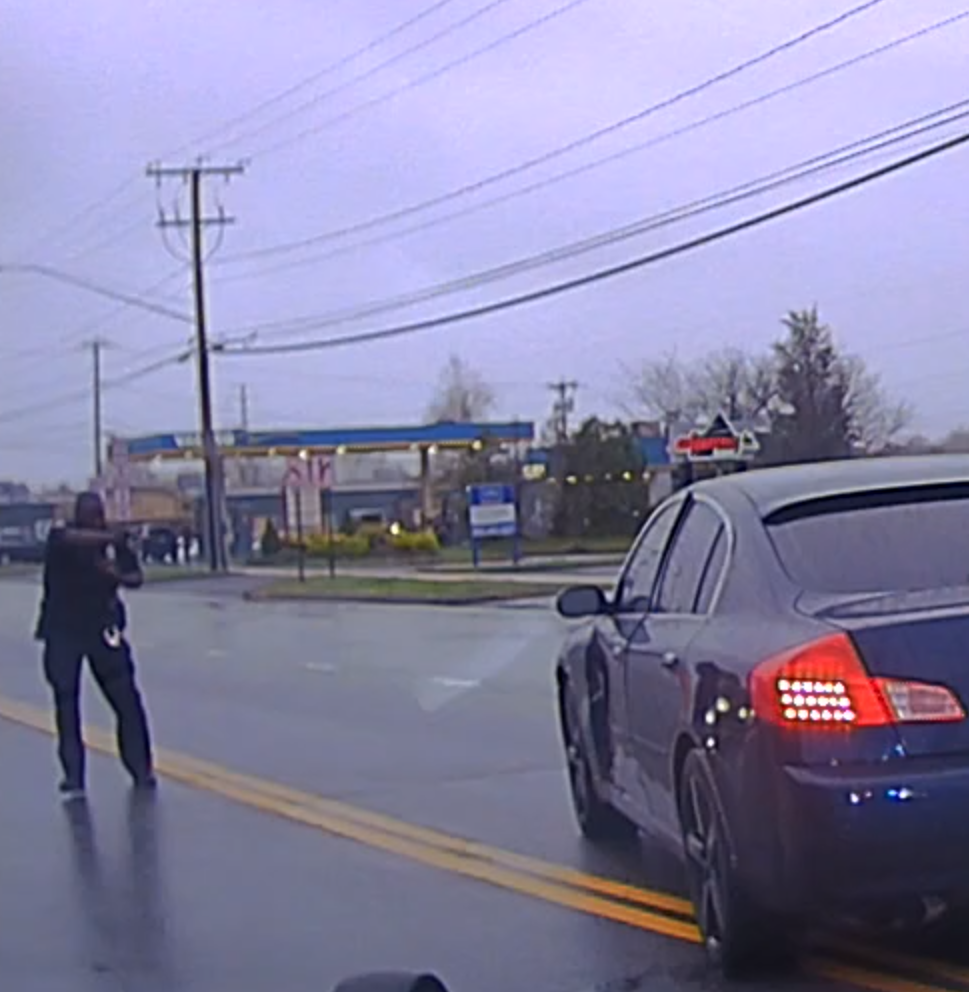 A screengrab from the first of three videos released by the chief state’s attorney on Friday, May 3, 2019 depicting the moments after a police officer in Wethersfield, Conn. shot an 18-year-old driver following a traffic stop.

The Hartford State’s Attorney’s has cleared a Wethersfield police officer in the 2019 shooting death of 18-year-old Anthony Jose Vega Cruz.

In her decision, Hartford State’s Attorney Gail Hardy said she found that Officer Layau Eulizier Jr. was “objectively reasonable” when he fatally shot Vega Cruz last spring after an attempted traffic stop and a brief chase in the Hartford suburb. Vega Cruz was gravely wounded and died two days later, sparking protests and chants of “Justice For Chulo.”

“Officer Eulizier discharged his firearm in fear that the operator was about to run him over and that he would lose his own life. His belief that deadly force was needed to defend himself and others from the use or imminent use of deadly physical force was objectively reasonable,” Hardy wrote.

In her report, Hardy placed blame on Vega Cruz.

“On April 20, 2019, 18 year old Anthony Vega-Cruz fled from Wethersfield Police, who pulled him over for a motor vehicle violation,” she wrote. “In all probability, had he waited, this violation would have resulted in the issuance of a misdemeanor summons as this investigation revealed that Mr. Vega-Cruz had no criminal record and was not ‘wanted’ by law enforcement. Instead, Mr. Vega-Cruz fled and engaged police in a brief pursuit, endangering the lives of innocent motorists, the police, as well as his passenger, Stephanie Santiago.”

Hardy did not immediately respond to an emailed request for comment. Wethersfield police declined to comment. Ben Crump, an attorney for Vega Cruz’s family, issued a statement after the release of Hardy’s report.

“We are outraged that the officer will not face charges, but we remain hopeful that we will help the Cruz family find justice in civil court,” Crump said. “We intend to pursue civil lawsuits against the officer and the Wethersfield Police Department. This execution-style killing was senseless – a traffic violation should not carry a death sentence. Officer Eulizier was sworn to protect the rights of every citizen, and he failed that duty in the most shocking of ways. We will continue to pursue civil remedies so that Chulo’s family will get the justice they deserve.”

Eulizier has not previously commented on the case. But in a statement to the Connecticut State Police — quoted in Hardy’s report — he said this: “… I knew that there was nowhere I could go. I believed the vehicle was about to strike me … I was inches from the front of the vehicle and I feared for my life and knew that I had to stop the operator from running me over with his vehicle.”

Hardy’s investigative report details the events leading up to the April 20, 2019, shooting on Wethersfield’s Silas Deane Highway. Previously released dashcam video shows the initial traffic stop just before 6 p.m. on a rainy Saturday. Shortly after the incident Wethersfield police Chief James Cetran told reporters that “the plates did not match the car… The officer thought it was a stolen car.”

According to Hardy’s report, the officer pulled the car over because the “vehicle, with its heavily tinted windows, aroused Officer Salvatore’s suspicions as it traveled in his patrol area.”

During that traffic stop on Silas Deane, as Salvatore got out and approached the car, Vega Cruz sped away. Less than a quarter-of-a-mile up the road, Officer Eulizier joined the brief, high-speed chase and soon collided head-on with Vega Cruz’s Infiniti on the edge of a strip mall parking lot. Officer Salvatore’s SUV caught up to the Infiniti and hit it on the driver’s side.

What happened next was scrutinized by investigators, townspeople and supporters of both Eulizier and Vega Cruz. According to dashcam and surveillance footage, Eulizier ran out of his vehicle and placed himself — gun drawn — in front of Vega Cruz’s moving vehicle and fired multiple shots into the front windshield.

In a Connecticut Public documentary on the shooting, Eulizier’s attorney, Elliot Spector, argued that the young officer didn’t have time to make a “conscious decision” to shoot. He said Eulizier believed his life was in danger.

“There is nothing in the use of force policy that would indicate that [Eulizier], under these circumstances, did not use reasonable and justifiable force,” Spector said.

“It happened like that,” he added, snapping his fingers. “It was instinctive.”

Spector wasn’t immediately available for comment following the release of the report. Connecticut Public Radio also reached out to an attorney for the family of Vega Cruz.

But critics emerged after the shooting. Brian Foley, a former Hartford police deputy chief who now works for the Connecticut Department of Emergency Services and Public Protection, was a law enforcement analyst at FOX61 last spring. He said at the time that even though the state’s current policy on moving vehicles may allow police officers to shoot, Eulizier’s “bad tactics” escalated a situation into a “life-or-death situation.”

“As long as officers have that in their head that they can shoot at a moving motor vehicle, sometimes the wrong decision might be made,” Foley said.

Vega Cruz’s girlfriend, Stephanie Santiago, was a passenger in the car and was uninjured in the shooting. She told Connecticut Public last year that the couple was  heading to dinner when the police stopped them. Vega Cruz had a damaged headlight, she said. He “forgot to take a turn and the cop came behind us,” Santiago said.

Connecticut Public also learned that Vega Cruz’s car was not registered and that the teen was driving without a license.

“We didn’t really speak in that moment because we were scared,” Santiago said. “Anthony was very scared. He was just looking around and he was very quiet — I’ve never seen him so worried.”

Santiago said Vega Cruz had a previous encounter with Wethersfield police in the weeks leading up the April 20 traffic stop and shooting. Vega Cruz told her that police pulled him over in Wethersfield, but he drove off, Santiago recounted. Meanwhile, Wethersfield police reported an incident after midnight on April 2 — about two weeks before the shooting — in which a car matching Vega Cruz’s Infiniti was pulled over on Ridge Road because, according to an incident report obtained by Connecticut Public Radio, an officer ran the plates and saw it was “suspended and belonged to a gray Hyundai.” The officer reported that the vehicle fled after he got out of his police car to approach the driver.

In that situation, the officer decided not to pursue the vehicle.

Eulizier joined the Wethersfield Police Department in August 2018. He was placed on administrative duty after the shooting. After the shooting, the department extended Eulizier’s one-year probation period as a new officer by another six months while the investigation proceeded.

In August 2019, Vega Cruz’s family filed an intent to sue the town of Wethersfield, contending that Eulizier was “reckless” when he approached the vehicle and fired the fatal shots. The family has been represented by civil rights attorney Ben Crump, who has criticized the town for hiring Eulizier despite supervisor’s concerns about the young officer’s performance at his previous police department in Manchester, Conn.

Hardy’s decision in the Vega Cruz shooting comes after a period of scrutiny for the longtime prosecutor. The Hartford Courant reported on Hardy’s significant backlog in closing deadly use of force cases. In December, Hardy released reports into four other incidents and found that each one was justified. At the time, the one case that remained open was the death of Vega Cruz in Wethersfield.