‘Either there’s a serious fear, or a serious disregard for black and brown lives’: A CT activist’s path forward 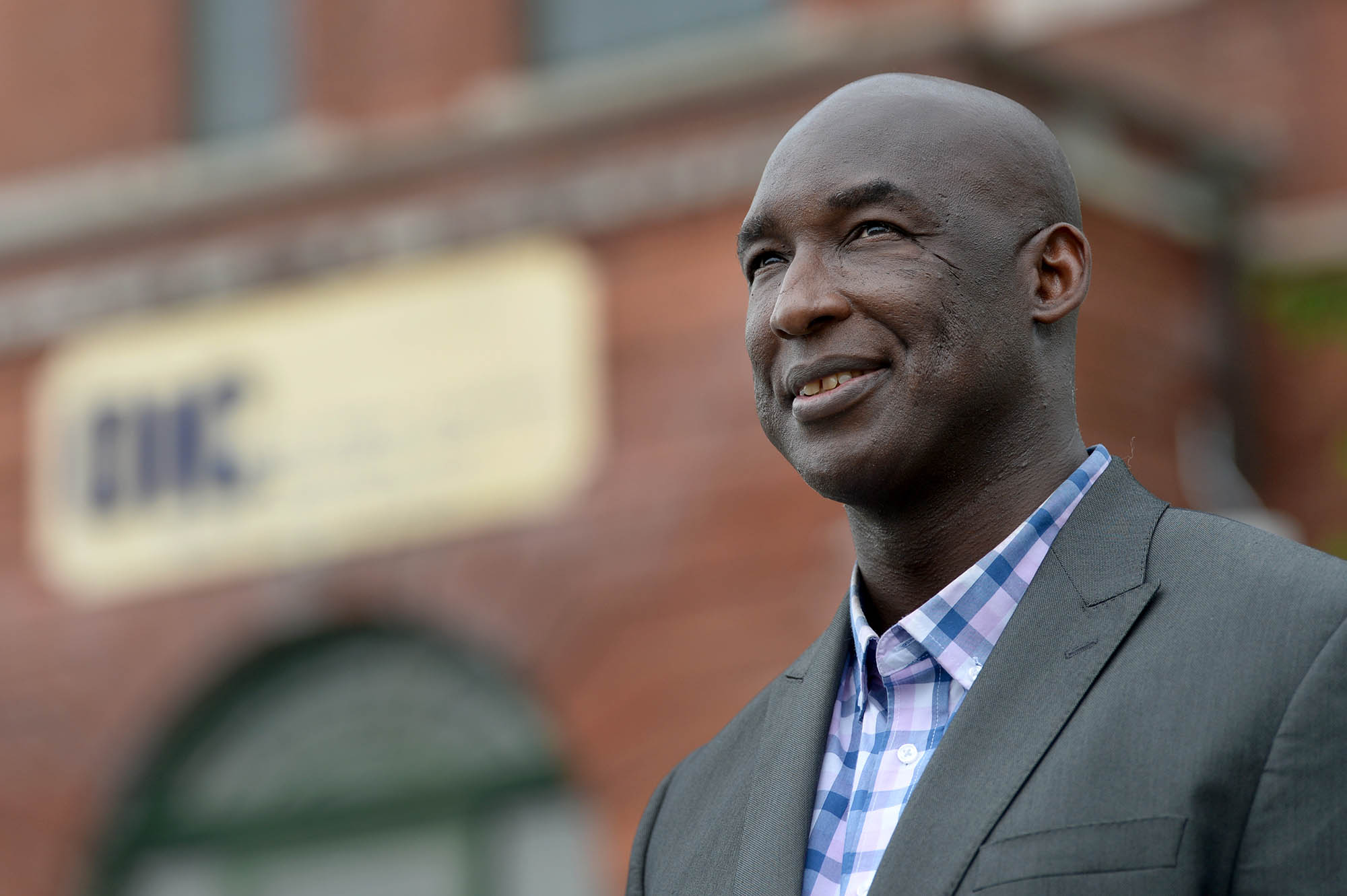 Daryl McGraw is co-chair of the state’s Police Transparency and Accountability task force and founder of Formerly Inc, a criminal justice consulting company that develops innovative reentry strategies for former prison inmates and their families to help with the reintegration process.

When Daryl McGraw saw the video of Minneapolis police officer Derek Chauvin kneeling on George Floyd’s neck, he flashed back to the night in 2007 when he was on the ground, being tased over and over again, while police officers stood around him and laughed.

“I felt like I was gonna die that day,” the Norwich resident said. “The only difference between me and Mr. Floyd is that he died and I lived.”

According to McGraw, 50, the encounter began when an officer pulled him over, allegedly for using his cellphone while driving. McGraw said that when he reached over to his glove box to take out his license and registration, the officer reached in and choked him, asking him, “Where the drugs at? Tell me where the drugs at.” Panicked, and high on marijuana, McGraw pressed the gas pedal, and the police followed him home, he said.

There, he said, they threw him on the ground and began tasing him. He was ultimately charged that night with violation of probation.

For people that are incarcerated, success means getting out and finding purpose — finding a way to live crime-free, to live and become a productive member of society. The system doesn’t set up enough opportunities for individuals to do that.”— Daryl McGraw

The encounter with police was was one of many: McGraw, struggling with addiction, was incarcerated more than eight times on counts of drug possession and distribution from the 1990s to 2010, giving him a front-row seat to the way police often treat black and brown people – and, later, a mission to mitigate the system’s effects for others.

He said that he repeatedly witnessed white offenders being sent to drug recovery programs instead of prison, an option continually denied him.

“Either there’s a serious fear, or a serious disregard for black and brown lives in Connecticut,” he said. According to a review of Connecticut use of force investigations, ten black or Hispanic people have been killed by police shootings in the state since 2015 – three of them in 2020 alone. “They’re pulling the trigger because they’re scared, or because they don’t feel like black or brown people have the same rights as anyone else,” McGraw said.

McGraw is now a co-chair of the state’s Police Transparency and Accountability Task Force, formed in late 2019. And he runs a criminal justice consulting company called Formerly Inc. that promotes what he calls a form of restorative justice.

Through his work with Formerly Inc. and his advocacy, McGraw hopes to use his experience to make lasting change. And in the aftermath of Floyd’s death, when there are calls in Connecticut and throughout the nation for structural policing reforms, his hard-won perspective suggests another way forward.

Restorative justice practices bring offenders together with victims and community members to collaboratively address the hurt caused by a crime. It’s a method widely piloted and used in cities throughout the country.

In Connecticut, restorative justice is mostly used in schools. Within the complex realm of adult incarceration, Formerly Inc. takes a restorative angle on addressing what McGraw sees as three essential aspects of successful re-entry after release: community, systems, and the individual.

Formerly Inc’s Forensic Peer Mentoring program trains former inmates to support those still behind bars and recently released. Peer mentors do everything from sharing meals to driving their mentees to appointments to helping them connect with resources to establish new lives outside prison.

“It’s the community working with the system to help out the individual,” McGraw said. The effect is twofold, he said: It drives effective re-entry and reduces recidivism for mentees, and, at the same time, it allows formerly incarcerated people to find “a career and an identity” helping others.

Da’ee McKnight, a staff member at the Bridgeport-based organization Family Re-Entry, echoed the importance of peer mentors who understand the challenges to reintegration, from guilt for leaving children while serving time to practical concerns about finding employment.

“If a person’s getting out of prison, it’s important that they connect with someone who has been successful at navigating the re-entry hurdles—and has not only been able to achieve success in the community, but also has reached out to help others,” he said.

McGraw said that if he had had access to this kind of peer mentorship and visible role models, “my life would have been tremendously different.”

Born and raised in Stamford by a single mom, McGraw remembers constantly witnessing violence in his community.

“Violence was the way everything got solved,” he said. “Even the older people would be like, ‘If you got a problem with that guy, hit him over the head with something.’” It was also how the neighborhood’s drug dealers got, and kept, their territory. And they “had the cars, the luxury, the money, the power,” he said. “I idolized them.”

McGraw was first caught and incarcerated when he was 19, charged with possession of narcotics. After he was released from three months in prison, he returned to his community, where “going to prison was like a badge of honor,” he said. The cycle of selling and using drugs, entering and leaving prison, continued for the next decade.

After the tasing incident in 2007, he spent three years in prison. Near the end, he said, he was given a book called “The Purpose Driven Life” by Rick Warren. It changed his life. He began journaling. By the time of his release, he had filled six composition notebooks with reflections and aspirations that comprised his new “five-year plan.”

By 2015, McGraw had earned a bachelor’s degree, a master’s in management and organizational leadership, and certifications as an addiction counselor and recovery support specialist. Despite his qualifications, he recounts being denied employment multiple times due to his criminal record. But eventually he held positions everywhere from Yale’s Program for Recovery and Community Health and Connecticut’s Department of Mental Health and Addiction Services.

McGraw emphasizes that he succeeded against the odds, an exception rather than any sign that the system doesn’t need the reforms he advocates.

“For people that are incarcerated, success means getting out and finding purpose — finding a way to live crime-free, to live and become a productive member of society,” he said. “The system doesn’t set up enough opportunities for individuals to do that.”

Motivated by his past experiences, he founded Formerly Inc in 2018. He began contacting different grassroots organizations and correctional facilities, developing the training modules he teaches today. The Forensic Peer Support program has trained 90 people to date, and hundreds more correctional officers and staff have been served by the implicit bias trainings, urban trauma workshops, and re-entry simulations that Formerly Inc offers, he said.

McGraw emphasized that deep systemic reform is necessary alongside these community-based efforts — starting with policing. Otherwise, the disconnect between police and the communities they work in festers, creating the conditions that allowed for his tasing, George Floyd’s death, and endless other instances of police brutality against black and brown people, he said.

“Instead of doing a lot of re-entry work, how do I get to a place where we’re talking ‘no entry?'” he asked.

For starters, he believes that police should be recruited from the communities that they serve. This would ensure that the police not only reflect the racial makeup of their communities, but also identify with the people and places they are protecting, reducing the misunderstandings that lead to thoughtless brutality and incarceration.

At the state task force’s June 8 meeting, its second since forming last year, he suggested that police officers should be required to serve at least 500 community service hours in an area before being assigned to work there — a point that he reiterated in his interview with the Mirror.

Other proposals included reviewing and passing stricter guidelines for police stops — particularly police interactions with people with mental health conditions — as well as pushing for citizen review boards, tightening hiring practices, and refocusing training to de-emphasize use of force.