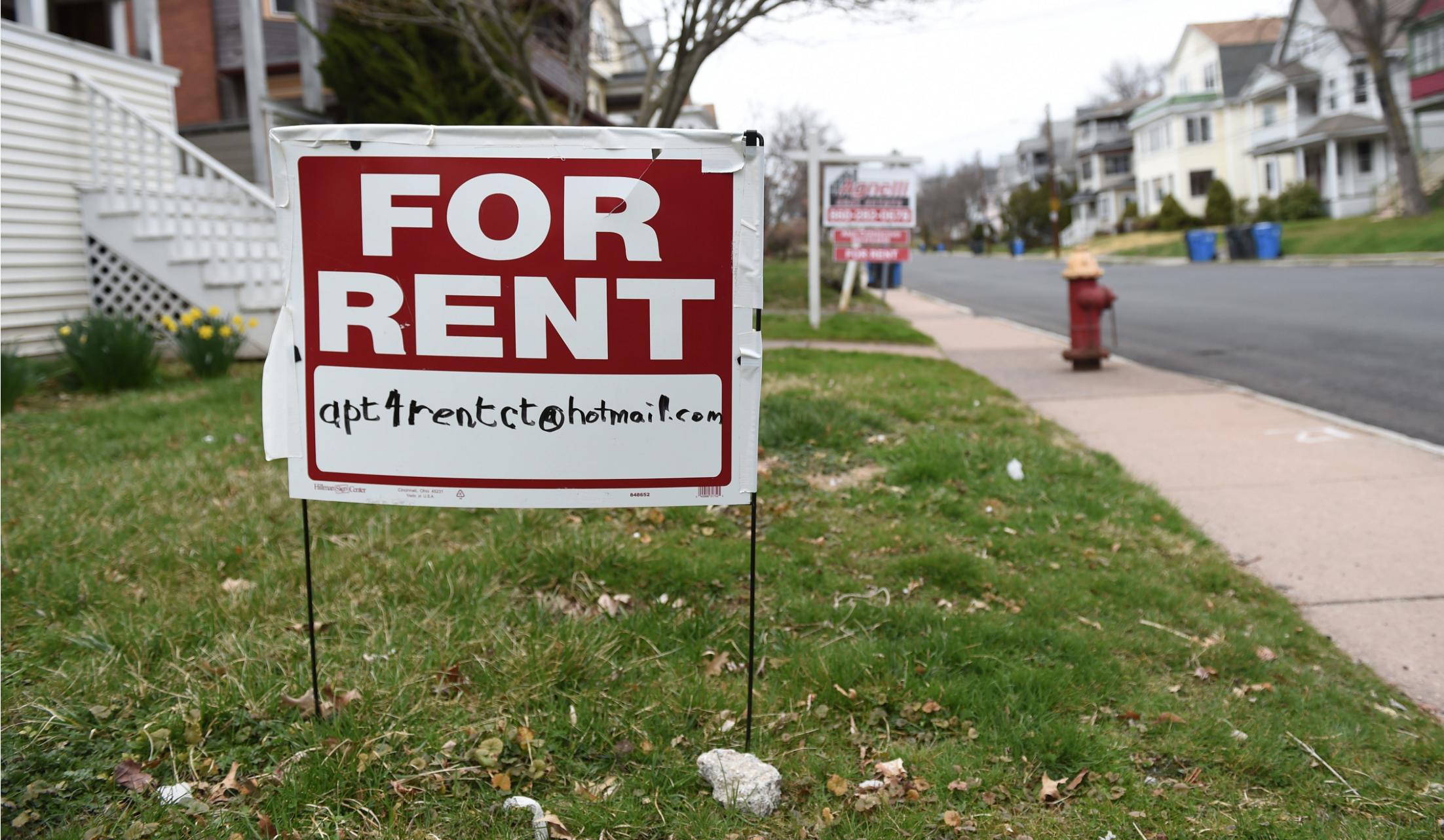 Is the state headed for an eviction crisis? To be determined…

“For Rent” sign hangs in front of a house in Hartford’s West End.  |   photo by: Cloe Poisson

For the last two months, Dena Butler has not been able to pay the $750 rent she owes for the bedroom she rents in a Stamford house. She got sick with what she believes was COVID-19 early in the pandemic and the Darien coffee shop where she was employed didn’t have any hours for her when she recovered.

Her brother began working crazy hours as an Uber driver to pay her rent while she waits for unemployment to kick in or for business at the coffee shop to pick up so she can return to work.

It’s unsustainable, she said, because her brother is going to either get sick from the coronavirus or sleep deprivation – whichever catches up with him first.

“He works day and night risking his health for me,” Butler said through tears. “This virus has put me in a bad way emotionally. It’s left me without any money. It’s changed my life.”

Her June rent payment is due Wednesday.

With no immediate help from the state or federal government in sight — she’s still waiting for the state Department of Labor to process her unemployment application — Butler is just one of countless people that the pandemic has rendered unable to afford rent.

We had a housing crisis before all this. COVID has just made it even worse.”

Landlords in Connecticut report the number of residents not paying rent has tripled since COVID-19 shut down the economy. In April 2019, only 5% of tenants missed rent payments compared to 17% this April, according to a recent survey of landlords conducted by the governor’s office. By May, an estimated 22% of renters here had missed rent payments and 22% had no confidence they would be able to pay in June, according to a U.S. Census Bureau survey.

That’s 140,000 Connecticut residents who don’t believe they can make rent next month – three-quarters of them black, Latino or another minority.

And so evictions are expected to skyrocket in the coming months, the landlords report. In the typical year, 4% of tenants are evicted. This year, a 7% eviction rate is forecast, but it could get as high as 13%.

“We had a housing crisis before all this. COVID has just made it even worse,” said state Rep. Brandon McGee, a Democrat from Hartford and co-chairman of the legislature’s Housing Committee.

Why they can’t pay

The federal government has pumped an unprecedented amount of money into expanding unemployment benefits to those who typically would be ineligible and increasing payments for those out of work. 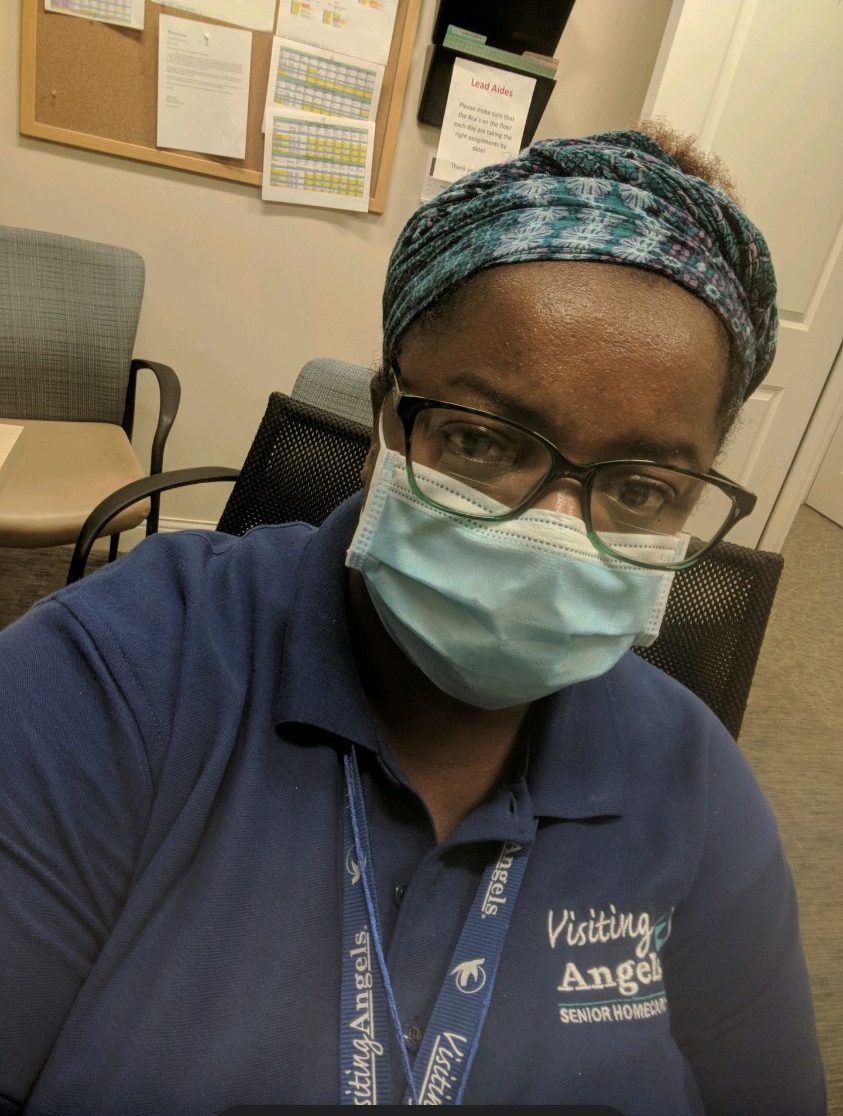 Dione Dwyer, lives in a three bed room apartment in PT Barnum Housing in Bridgeport. She was only able to pay partial rent one month during the pandemic.

Several renters told the CT Mirror, however, they are worried about paying either because they have been waiting for weeks for their unemployment benefits or they are not eligible because they stopped working after deciding it wasn’t worth risking their health for a minimum wage salary.

Dione Dwyer, who made roughly $19,000 a year taking care of elderly and disabled people in their homes, was only able to pay part of her April rent. Because she relied on the bus to work, she was unable to get to many of her clients when public transportation was drastically scaled back during the pandemic.

After witnessing her daughter wait weeks for her unemployment claim to be processed, she didn’t even bother applying. Instead, Dwyer used her federal stimulus check for a down payment on a car so she could get to a new low-wage job caring for the elderly in an assisted living facility.

“It was a whole different kind of struggle to figure out how I was going to work without transportation,” said Dwyer, who lives in PT Barnum, a subsidized housing complex in Bridgeport. “Somewhere along the line, rent was getting missed because weeks were going by and I wasn’t making enough to pay rent.”

Others are paying rent by scaling back how much food they buy or skipping other bills.

“We definitely pushed paying our electric bill off a month so that we could afford to buy groceries,” said Dominick Mazzotta, who lives in Middletown with his girlfriend. He has been out of work since K-12 schools closed, when his job taking care of children at a before- and after-school program shut down. He stopped working his second job at an arts and crafts store because customers were just blatantly ignoring social distancing and other orders from the governor and Centers for Disease Control. 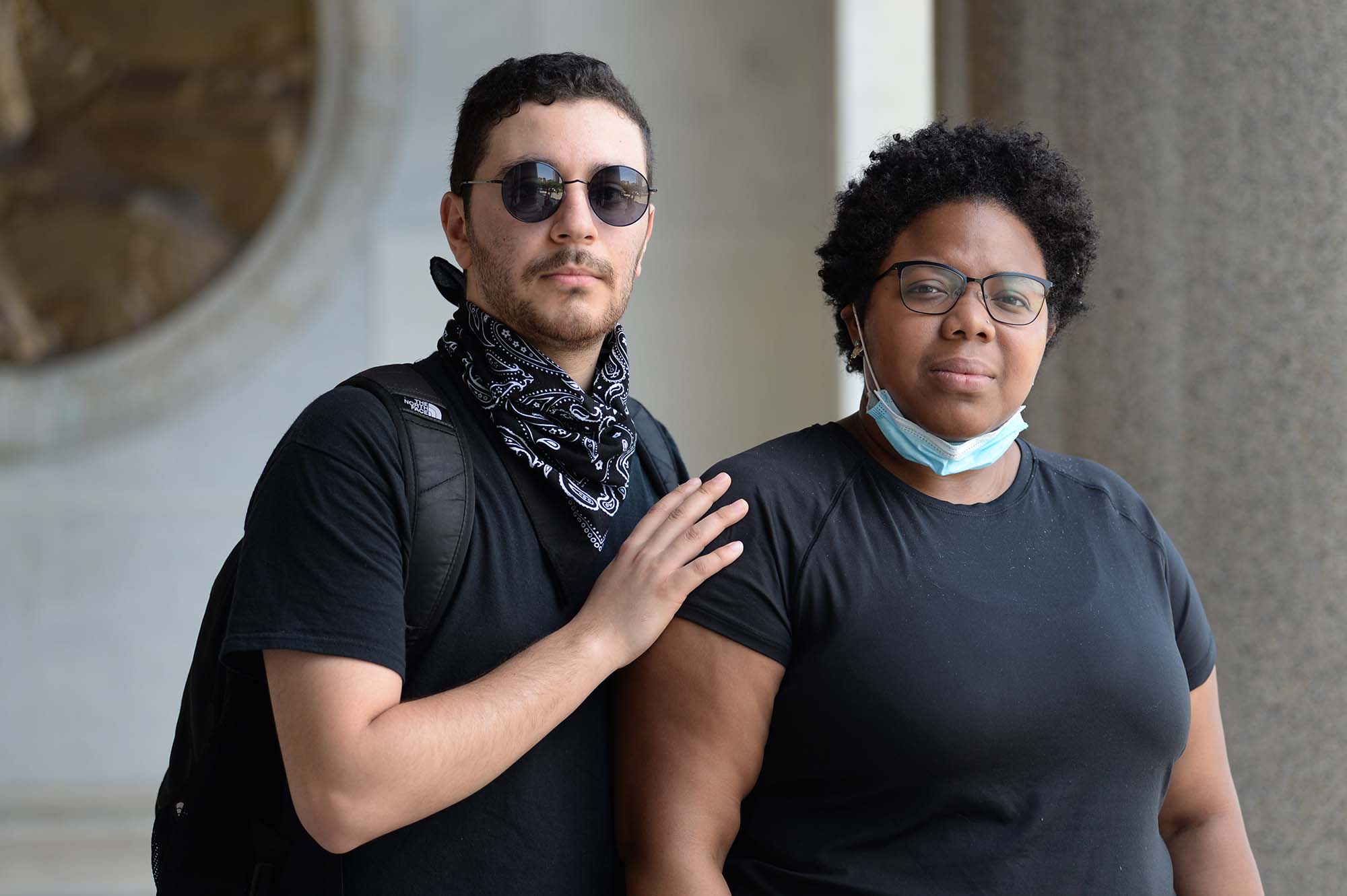 Dominick Mazzotta and Gabriella Edwards, of Middletown, are struggling to pay their $1,200 monthly rent because Mazzotta is unemployed due to the COVID-19 pandemic shut down.

When the pandemic stretched into a second month – and he waited for his unemployment check – they scaled back their grocery budget so they could afford rent and electricity.

Still waiting for his benefits, the onus of paying their $1,200 rent has beenon his girlfriend, who is a nurse at Connecticut Children’s Medical Center.

“It’s a lot of stress and not fair putting it on one person,” he said.

Facing mounting pressure from the growing “Cancel Rent” grass-root movement and big city mayors to do something about a potential eviction crisis, Lamont signed an executive order in early April that gave tenants a 60-day grace period to pay their April and May rent. It also restricted landlords from filing in court until July 1 the paperwork needed to begin evicting someone. Those filings negatively impact tenants’ credit scores.

Landlords want to keep them in their apartments, but let’s be realistic. Landlords, we’re not the welfare department. If the tenant says, ‘I can’t pay, I don’t have a job. I don’t have anything else’ – and if the state’s not gonna help – what are we supposed to do?”

The 60-day grade period for most of those who missed their April rent ends today.

Landlords say unless a bailout is given to renters or themselves they will be left with no other option but to evict.

“Landlords want to keep them in their apartments, but let’s be realistic. Landlords, we’re not the welfare department. If the tenant says, ‘I can’t pay, I don’t have a job. I don’t have anything else’ – and if the state’s not gonna help – what are we supposed to do?” asked John Souza, the owner of 280 apartments in Hartford, Windsor and West Hartford and president of the Connecticut Property Owners Association.

“We’re gonna go to the court system and hopefully get the apartment back. That’s reality. I am not trying to be a dick, but that’s the way it’s going to have to happen.”

Help on the way?

The state is prepared to spend $15.3 million of the federal stimulus dollars it received to help people impacted by the pandemic pay rent. The programs to deliver that help, however, won’t be up and running until sometime in July, despite Congress passing the law in late March.

The bulk of the aid in Connecticut – $10 million – will go to provide direct relief to some of the 150,000 families that advocates in Connecticut estimate are struggling to make rent. Another $2.8 million will go to relaunch a program that was established during the last recession that will negotiate reduced rent for those who have eviction filings pending against them. And $2.5 million is earmarked for undocumented immigrants who aren’t eligible for most of the other economic relief benefits, including unemployment compensation.

But the price tag to provide help to everyone facing eviction in Connecticut is substantially higher, advocates say. That cost: $150 million a month, the National Low Income Housing Coalition estimates.

For example, the $2.5 million in rental relief aid for undocumented immigrants averages out to just $20 per person if it were to be distributed evenly.

“It is an insult, really. That’s a box that they’re now able to check and say, ‘We have answered the call to give relief,'” said Constanza Segovia, a community organizer with Hartford Deportation Defense and the Cancel Rent movement. “There’s a real lack of urgency of what is coming down. We are looking, come July 1st, at an eviction crisis so deep, so extreme.”

Attorneys at The Connecticut Fair Housing Center also believe it will fall far short. They worry that requiring people to apply for help and having to turn in a plethora of supporting materials to prove need and income will shut out the neediest.

“We are concerned that due to the logistical problems … some tenants may apply and be eligible, but not get assistance because their employers or landlords did not cooperate timely or because the fund ran out before their landlord was paid. Does this mean the tenants can be evicted for non-payment of rent? Are there any protections for tenants whose landlords do not cooperate in submitting verifications timely?” the watchdog agency said of the program.

There’s a real lack of urgency of what is coming down. We are looking, come July 1st, at an eviction crisis so deep, so extreme.”

State officials are not convinced by all the projections, and instead plan to provide the $15 million and see if it meets the demand.

Asked how many people are expected to seek rent relief, state Housing Commissioner Seila Mosquera-Bruno said only time will tell.

“I couldn’t tell you. I mean there are statistics, but there is also reality. And some people have been getting unemployment benefits, the stimulus checks,” she said. “We are not going to know the reality until we start a program and see the needs of the families. We are going to start running the program, hopefully, sometime in July and we’ll see. We intend to help families that are having trouble, and some people will go back to work. So, we don’t have a crystal ball.” 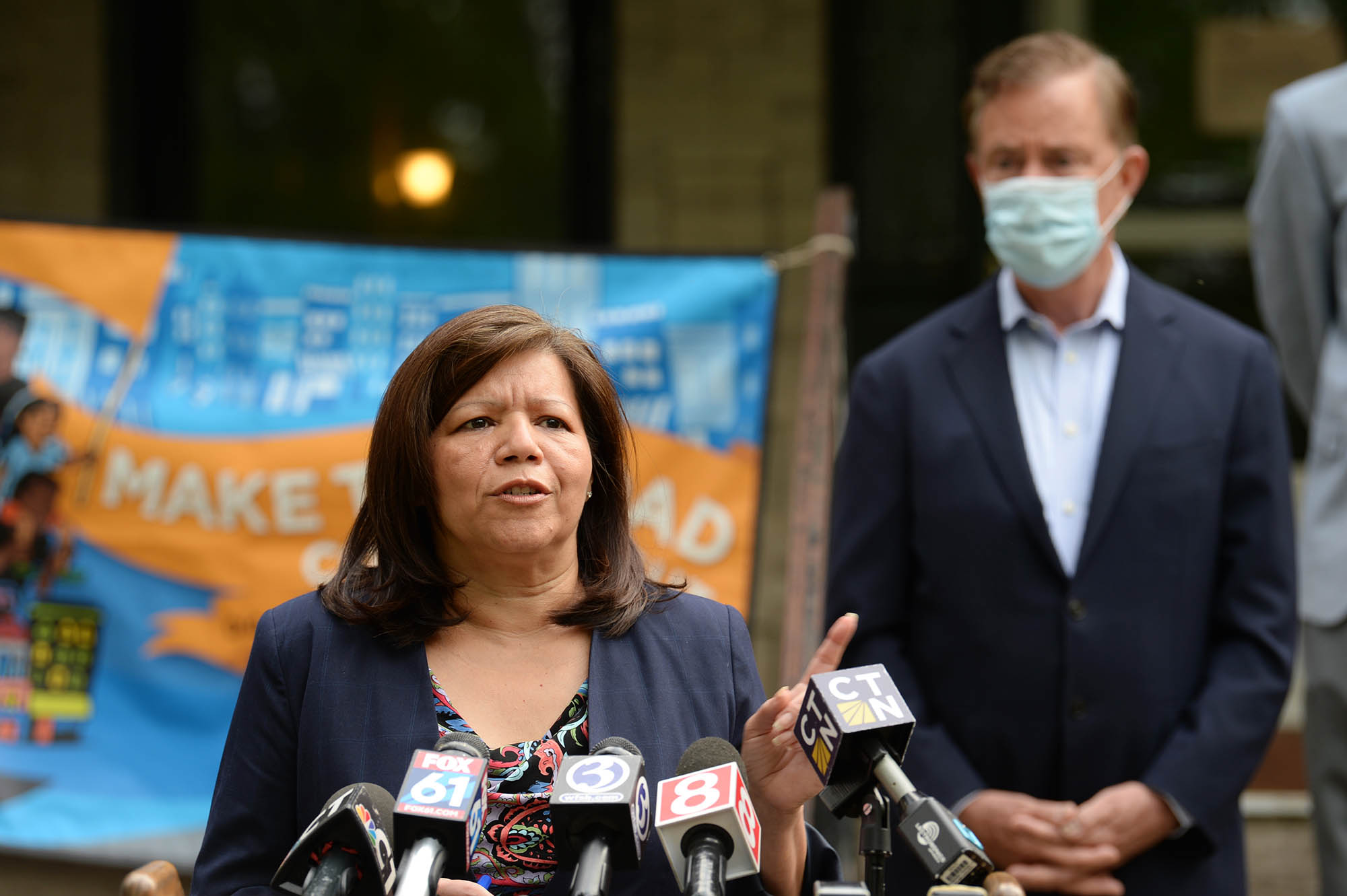 Seila Mosquera-Bruno, Commissioner of the Department of Housing, speaks at a press conference held to announce an aid package for undocumented immigrants.

The commissioner was noncommittal when asked if the state will be providing some additional aid if demand far outstrips available funding.

“We’re taking it a day at a time. Things change every day and what we want to do is try to help as many families as we can.”

But Souza, the landlord with properties throughout Hartford who has had some tenants unable to pay rent, doesn’t expect the amount the state is dedicating for rent relief to be enough.

“It might help people that have fallen behind and you know, need to get back on their feet, but it’s not going to be enough for sure,” he said. “I know landlords are going to end up taking a haircut. The state and the federal government is going to have to come up with some more, hopefully.”