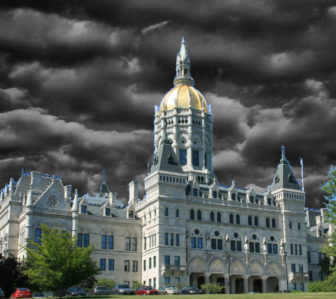 Researchers warn that the pandemic could cause an unprecedented drop in Connecticut’s tax revenues.

Connecticut’s finances are considerably worse than even the ugly scenario Gov. Ned Lamont’s administration painted in early May, if the analysts behind a new private study are correct.

The coronavirus-induced recession could erode more than $6.5 billion in state revenues next fiscal year — two-and-a-half times the gap administration officials predicted — if researchers from Arizona State and Old Dominion universities are correct.

The last time Connecticut faced a deficit close to $4 billion, in 2011, then-Gov. Dannel P. Malloy and the legislature responded with tax increases worth more than $1.8 billion.

The fiscal crisis is unparalleled nationally “given the rapid expansion of a global pandemic, the failure of the federal government to effectively respond to the emerging pandemic, the synchronized economic shock across states” and the variation in state efforts to contain it, wrote economists Christos A. Makridis and Robert M. McNab.

The researchers studied states’ revenue and labor market trends from 1994 through 2019, finding that for every 1% rise in employment, tax revenues, on average, jumped 1.56%. Income and corporation taxes tend to climb even faster relative to job growth.

Comparing these trends with the unprecedented jobs losses during this pandemic, Makridis and McNab projected states, on average, would lose 20% of annual revenues.

Most of the states facing a larger-than-average drop are heavily reliant on income tax receipts to fuel their respective budgets.

Connecticut is projected to face a 32.7% drop, 10th-worse of all states, with neighboring New York ranking first at 40%.

Lamont’s budget director, Office of Policy and Management Secretary Melissa McCaw, warned in early May that state revenues — if the current recession were similar to the downturn of 2007-09 — would leave a $2.7 billion hole in the fiscal year beginning July 1. And roughly 90% of that gap is due to eroding revenues rather than cost increases.

A $2.7 billion gap is imposing enough, representing a gap of 13.5% in the General Fund. Administration officials say it would take the entire rainy day fund, plus about $500 million in spending cuts and revenue enhancements to close that gap.

But if the shortfall is close to $6.5 billion, as Makridis and McNab project, one-third of Connecticut’s budget would be unfunded.

Even the rainy day fund — which is still expected to hold $2.2 billion after plugging deficit in the fiscal year that ends June 30 — would solve less than half of the problem Connecticut faces in July.

And if revenue losses for the 2021-22 and 2022-23 fiscal years also are larger than the $2 billion-per-annum projected by the Lamont administration, state officials could be eyeing nothing but ugly budget options next spring.

Both the Lamont administration and the House chair of the legislature’s tax-writing panel advised Thursday against panic.

Because income and several other state tax filing deadlines were pushed back from April 15 to mid-July, analysts say Connecticut won’t have a clear picture of tax revenues until September or later.

It also remains unclear how many of the 269,000 jobs Connecticut lost in late March and early April have been permanently eliminated.

Connecticut’s congressional delegation remains cautiously optimistic that another round of pandemic relief, with a focus on aid to states and municipalities, will be enacted later this year.

Chris McClure, spokesman for the governor’s budget office, said the administration used conservative projections for income, sales, corporation and other taxes during its last forecast. And several revenues have been tracking according to projections in the weeks since.

“However we must remain diligent in monitoring the key economic data to adapt to changes as needed and plan accordingly,” McClure added. “It will be essential to make sure we have a safe re-opening that will hopefully bring with it more employment and economic opportunities to fuel new growth.”

Rep. Jason Rojas, D-East Hartford, co-chair of the Finance, Revenue and Bonding Committee, said no one knows how many of the workers displaced since the pandemic began in March will be returning in the coming weeks and months as the economic reopening continues.

The state Department of Labor officially reported a 9.4% unemployment rate Thursday for the month of May.

But the state’s official unemployment rate must be based on a local business survey conducted by the U.S. Census Bureau. And Connecticut labor officials have said this survey doesn’t accurately reflect jobless totals during the pandemic for several reasons.

Census bureau staff often can’t collect data in person, making the sample sizes particularly low. There also have been a high degree of inaccurate responses with many workers identifying themselves as sick when they’d actually been laid off.

State labor officials had pegged the actual unemployment rate for May at about 19%.

“We’ll get through this,” Rojas said. “There will be difficult decisions to be made. We knew that.”