Are Lamont and his fellow Democrats headed for a showdown over tax reform?

Gov. Ned Lamont doesn’t want to tax Connecticut’s rich, but many in his party feel differently

Over the next year, Gov. Ned Lamont has to help guide Connecticut’s economy out of the coronavirus pandemic and close a huge budget deficit.

Many of the governor’s fellow Democrats say these things cannot be accomplished without doing something Lamont loathes: raising state taxes on Connecticut’s wealthy.

But since Lamont also is expected to begin his campaign for a second term over the next 12 months, the governor may have no choice but to compromise with those who want reform.

“I think there has to be some movement and some creative and open-minded approach” to solving Connecticut’s economic and fiscal challenges, said Senate President Pro Tem Martin M. Looney, D-New Haven.

The governor and others are hopeful President-elect Joe Biden will funnel more aid to states shortly after he takes office on Jan. 20.

But with more than 180,000 residents still collecting weekly unemployment benefits, a fragile retail and hospitality sector and municipalities out hundreds of millions of dollars in revenue, Connecticut can’t expect Washington to solve everything, Looney said.

The top Democratic senator and others in his caucus want to expand two key non-education grant programs to assist poor and middle-class communities.

For more than a decade, PILOT [Payment In Lieu Of Taxes] grants have reimbursed communities for less and less of the taxes they lose on tax-exempt property owned by the state, colleges and hospitals.

Though full details weren’t available, Looney said Senate Democratic leaders are crafting a tiered system that would add millions of dollars in reimbursement to cities and towns with modest or low wealth, and with large amounts of tax-exempt property.

But with huge deficits already projected for the next two-year state budget, there’s no almost no way — mathematically — to pay for that unless Connecticut asks its wealthiest to pay more.

“There’s no way to do it other than finding a way to restructure our tax system to be equitable,” Looney said.

Connecticut already has a highly regressive state and municipal tax system — meaning many of the levies are not proportional to a taxpayers’ income or wealth.

The last state tax incidence analysis — which measures these shifts — was issued in December 2014 and found households making less than $48,000 annually effectively spend almost 24% of their earnings on state and municipal taxes. By comparison, a household earning $200,000 pays 10.5% while one earning slightly more than $2 million pays 6.5%.

Looney supported a 2019 proposal to raise income tax rates on the capital gains earnings of households whose overall income topped $500,000 per year. Lamont killed that during final budget negotiations with legislative leaders.

Lamont often says he’s open to all ideas. And his budget director, Melissa McCaw, offered a similar message recently when discussing the huge projected deficit — $4.3 billion across two years — the administration must begin closing in February.

“Gov. Lamont will propose a balanced budget to the Connecticut General Assembly in about two months that will fully fund all of our obligations, preserve our delicate economic environment and confront the challenges of the COVID-19 pandemic,” McCaw said. “We are always appreciative of those who are willing to present their ideas.”

But the governor, a Greenwich businessman, has warned repeatedly that one idea he’s not interested in is raising taxes — including on Connecticut’s richest residents. Lamont says that simply would prompt them to flee the state.

The governor has said he supports higher federal taxes on the rich, which would put states’ tax systems in competition. But even if that occurs, critics note, most of the money wouldn’t flow back here. Connecticut’s high average wealth per person usually translates into a smaller share of federal aid than most other states receive. 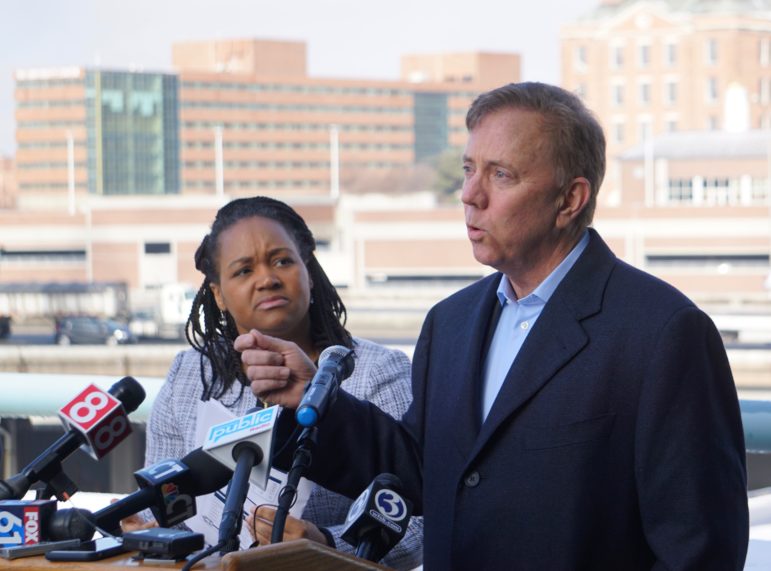 Rep. Sean Scanlon, D-Guilford, who took over last month as the new House chairman of the Finance, Revenue and Bonding Committee, said he also doesn’t believe Washington will solve all of Connecticut’s problems.

The Guilford lawmaker didn’t offer any specifics at this time, but Connecticut Voices for Children, a New Haven-based policy group, recently offered options for child credits that could return between $380 million and $590 million annually to the poor and middle class.

As Looney did, Scanlon also said the prospects of providing this relief without taxing the rich to pay for it are slim. Besides the huge, pandemic-induced deficit, Connecticut’s massive pension debt — one of the highest in the nation — is projected to place considerable pressure on the budget for decades to come.

Given that, Scanlon said it’s not essential that big tax relief measures be adopted immediately. But considering the massive inequality of the current tax system, the reform conversation — at the very least — must begin right away, he said.

“One of the reasons I agreed to take this job is to try to make the tax code fairer for people at the bottom and in the middle,” he said. “It’s one we should be sweeping out from under the rug and looking at. … There’s a fundamental imbalance here.”

Lamont’s fellow Democrats expanded their sizable majorities in the House and Senate this past November. But some of the party’s gains came in Fairfield County and in other affluent districts, where the prospect of any tax increases is likely to be opposed.

But Anne Hughes, D-Easton, co-chairwoman of the House Democrats’ progressive caucus, said she believes the coronavirus has convinced more lawmakers of the need to bolster poor and middle-income families.

The pandemic “has plunged many more residents into poverty, food insecurity and being at risk of eviction,” she said. “There is greater interest, because this is affecting all districts.”

Hughes and Connecticut AFL-CIO President Salvatore Luciano also noted that while most of the economy is struggling, the stock market — and those who hold most of the nation’s invested wealth — have fared much better.

“Billionaires just made a trillion dollars during the pandemic,” Luciano said, citing a recent data post by Americans for Tax Fairness, a coalition of more than 400 national, state and local organizations calling for federal tax reform. “The narrative that everybody’s suffering during the pandemic just isn’t true.”

According to the coalition, the worth of America’s 651 billionaires grew from nearly $3 trillion in mid-March to slightly more than $4 trillion in early December.

Connecticut’s 14 billionaires actually saw their net worth drop 5% during that same period — from $57.5 billion to $54.7 billion.

But Connecticut’s wealthy, in general, have been doing well for the last few years, according to data from Lamont’s budget office. Capital gains earnings grew almost 44 percent based on 2018 tax filings, and another 9.2% in 2019.

Organized public-sector labor, traditionally a key part of Connecticut Democrats’ election base, has made it clear in recent months that tax reform is a priority.

“Our tax system in Connecticut has long favored the rich, but it has never needed reform more urgently than now, when the pandemic is turning inequality into a lethal weapon against essential workers like our union’s janitors and security officers,” said Rochelle Palache, a leader of 32BJ SEIU, which represents janitorial and other state service workers. “Taxing the rich has always been about justice — now it’s also about survival.”

When asked on Nov. 4 — one day after the last election — whether he would consider higher state taxes on the wealthy, Lamont insisted the timing for any tax hikes was wrong since “we have the [economic] wind to our back.”

Luciano said the governor was dangerously underestimating the financial damage COVID-19 is doing to most households.

“It’s beating the crap out of working people,” Luciano added. “The one sector that’s actually making money hand over fist — you’re not going to ask a little more from?”