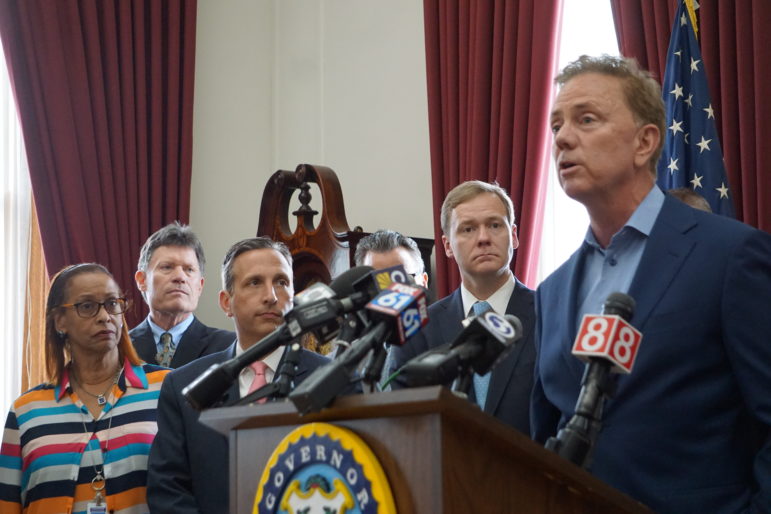 {Updated at 5:05 p.m. with comments from Senate Republican leaders.}

State officials are facing almost $4.3 billion in red ink in the next two-year budget, due largely to the coronavirus-induced recession, according to a new report Friday from nonpartisan analysts.

Those deficits, while daunting, are significantly less imposing than the massive shortfalls Connecticut faced after the last recession in 2011 — gaps that forced a record-setting tax hike of nearly $1.9 billion nine years ago.

The legislature’s Office of Fiscal Analysis also used its annual Fiscal Accountability Report on Friday to warn that Connecticut’s cash-starved transportation program is on pace to run deficits for four consecutive years and to reach insolvency by 2024.

“The pandemic recession will adversely impact the state budget for years to come,” the nonpartisan analysts wrote in their report, adding that debt service, required contributions to pensions and retiree healthcare, increased payments owed to hospitals and other fixed costs also are driving the deficit forecasts. 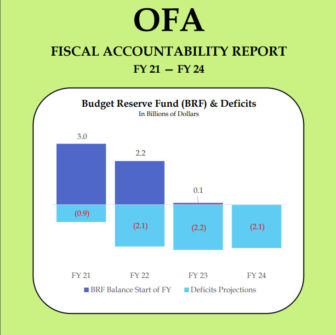 According to OFA, state finances for all programs — unless adjusted — would run nearly $2.1 billion in deficit in the fiscal year that begins next July and $2.2 billion in the hole in 2022-23.

But Gov. Ned Lamont, who must propose his next biennial budget to legislators in February, has nearly $3.1 billion in reserve. And while nonpartisan analysts estimate $854 million of that cushion will be gone by July — to close a deficit in the current budget — that still leaves Lamont more than $2.1 billion to mitigate the red ink to come.

Lamont’s budget agency, the Office of Policy and Management, which is required to submit its own Fiscal Accountability Report, issued very similar projections late Friday afternoon — both about the overall budget deficits and the transportation system’s woes.

In past years, when faced with major deficits, state officials have used reserves — if available — to temporarily replace shrinking tax receipts until the economy improves.

By comparison, Gov. Dannel P. Malloy inherited an empty rainy day fund — and about $1 billion in operating debt — when he took office in January 2011. And Malloy was faced with annual deficits 50% larger than those confronting Lamont — about $3.6 billion per year.

Lamont already has said he is optimistic the next two-year budget can be balanced without any major tax hikes, particularly if President-elect Joe Biden’s new administration and Congress send another round of federal relief to states early in 2021 as promised.

The governor has cautiously guarded the rainy day fund since the pandemic began, resisting appeals from some lawmakers to use more state resources to assist nonprofit social service agencies, nursing homes and municipalities.

Due largely to a surging stock market and expanded federal aid to the unemployed, Connecticut has seen its income and sales tax receipts surge — and its rainy day fund grow — since March, despite having more than 200,000 residents collecting weekly unemployment benefits for much of the summer and fall.

Despite the positive effects of the stock market and federal unemployment aid, the Lamont administration noted in its report, income and sales tax receipts for the current fiscal year, which began July 1, are still running below pre-pandemic levels.

Leaders of the Senate’s Republican minority cited the report Friday while chastising majority Democrats in the legislature for not proposing any spending cuts to mitigate the current deficit.

“It’s alarming that so far this year Democrats have called for more borrowing, abandoning the ‘debt diet,’ and not doing anything on the state budget until April,” Senate Republican Leader-elect Kevin Kelly of Stratford and Sen. Paul Formica of East Lyme, ranking member on the Appropriations Committee, wrote in a statement.

Kelly and Formica also noted Lamont’s proposal for closing the shortfall this fiscal year relies heavily on tapping the rainy day fund, rather than reducing spending. Democrats have countered that healthcare providers, schools and municipal governments would be harmed by any deep budget-cutting effort amidst the coronavirus pandemic.

Transportation fund in in trouble

Nonpartisan analysts also warned Friday in their report that the state budget’s Special Transportation Fund — already reeling from two consecutive years of legislators refusing to enact tolls — is set to run out of cash in 2024.

The STF primarily funds Department of Transportation operations, transit programs, and the debt on borrowing used for highway, bridge and rail upgrades.

That borrowing, in turn, leverages about $700 million per year in federal aid for infrastructure work in Connecticut.

But DOT officials say state bond funds and federal aid combined — which have totaled between $1.7 billion and $1.8 billion in recent years — fall $200 million to $300 million shy of the annual level needed to maintain good repair and make strategic improvements.

Lamont pressed lawmakers in 2019 to impose highway tolls on all vehicles, and in 2020 he asked just for fees on large trucks. The legislature, facing a lot of political pushback, acted on neither proposal.

Nonpartisan analysts say the transportation fund, which is supported with a combination of fuel tax revenues, a share of sales tax receipts and other fees, is expected to run a $46 million deficit this fiscal year and shortfalls ranging from $24 million to $65 million over the next three.

By 2024, absent a new source of revenue, those shortfalls will have wiped out the STF’s $122 million reserve and the program would be $21.5 million in debt, according to OFA.

Lamont has said he doesn’t plan to propose tolls when the 2021 legislative session opens in January but will press legislators for new options to preserve the transportation program.