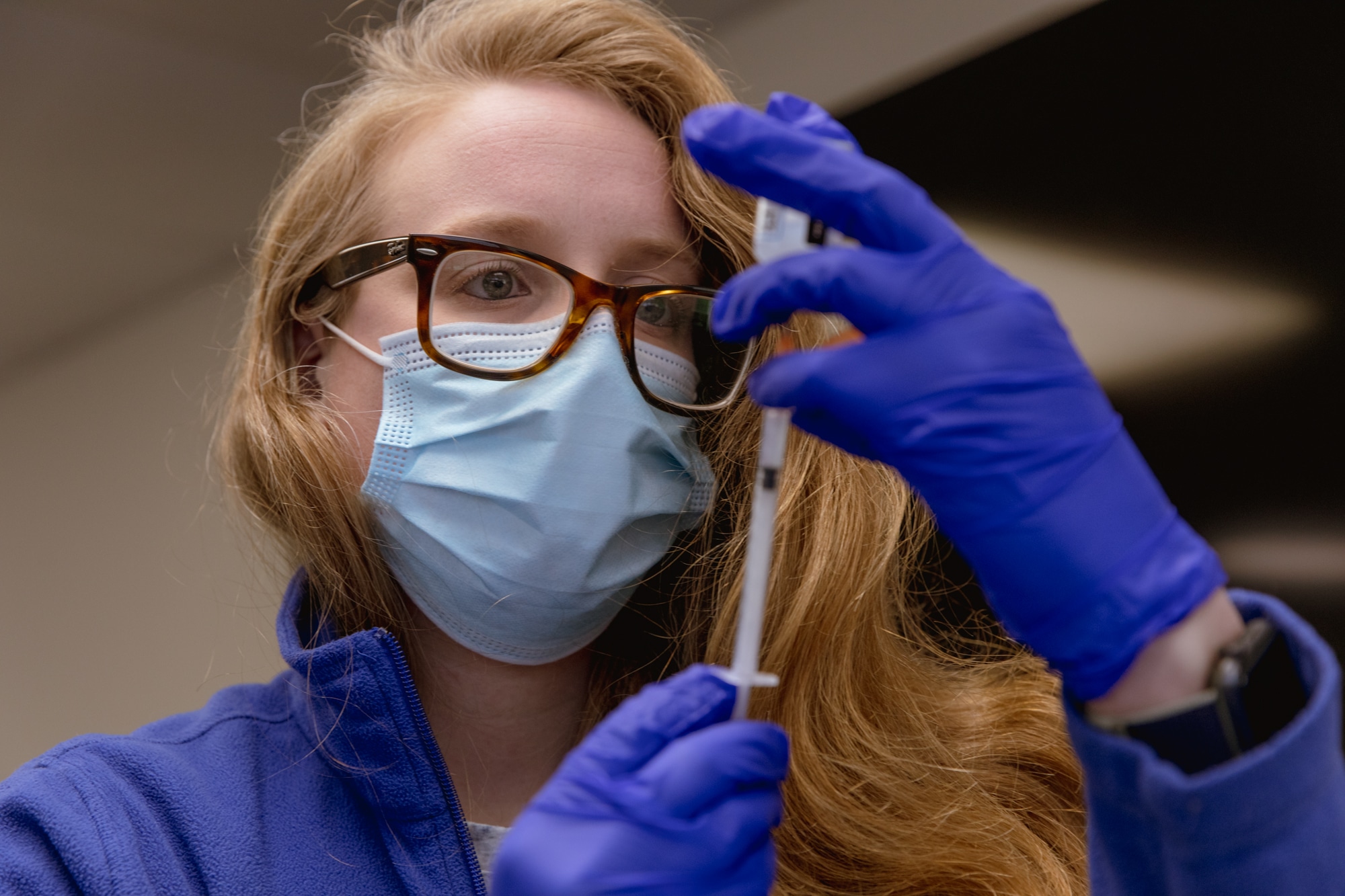 Courtney Weyel puts a COVID-19 vaccine into a syringe at Hartford HealthCare at Home before visiting housebound patients’ houses.

Residents reported long wait times on the phone, difficulty accessing their MyCharts accounts and other online systems, and appointments that were booked as far out as late April. By then, the state is expected to have opened up the vaccine to everyone 35 and older.

Along with people 55 and older, teachers and other education employees became eligible Monday to get the shot.

“It’s about 600,000 people, and we don’t have that many vaccines we’re getting on a weekly basis,” Lamont said. “If we had followed the [Centers for Disease Control and Prevention] guidelines, it would have been 1.8 million people, and you would have been going out months” before getting an appointment.

“I think there’s an awful lot of 55-year-olds who were up at 12:01 in the morning, trying to get online,” he added, “and I think for a lot of people it worked pretty well. A lot of people, I’m afraid you’re going to have to be a little bit patient over the course of the next week or so.”

[Who can get vaccinated against COVID in Connecticut, and when? Here’s what you need to know.]

Breaking with CDC and state recommendations, which place essential workers such as grocery store employees, postal staff and people with underlying medical conditions next in line, Lamont last week decided the remainder of the rollout would be determined by age.

Under the new plan, people 55 to 64 can begin scheduling appointments to receive the vaccine today, while those aged 45 to 54 can sign up starting March 22. Residents aged 35 to 44 will be eligible starting April 12, and those 16 to 34 can schedule appointments beginning May 3.

Teachers and other schools staff are an exception – anyone who works in those facilities is eligible for the vaccine starting today, and special clinics are being erected to accommodate those employees.

Despite reports of frustrated residents unable to book appointments online or over the phone – and others who have scheduled their first dose for mid-to-late April – Lamont said Monday that it was “premature” to discuss adjusting his ambitious timeline. The state is waiting just three weeks before opening eligibility to those aged 45 to 54, adding another 480,000 people to the pool of potential recipients.

Josh Geballe, the state’s chief operating officer, said officials expect 60% of the 650,000 people who are 55 to 64 or are working in the schools to get their first dose by March 22, when the next age group becomes eligible.

People who currently are eligible to schedule appointments can still do so in the coming months, even though more residents will be competing for those slots.

“These phases don’t begin and end cleanly on one day; they kind of bleed across each other,” Geballe said. “Our goal is to start the next phase at the point in time when we start to see slack in the scheduling.

“As soon as you start to see that slack in demand, that’s when you want to go to the next phase, because the last thing we want is an appointment slot with a dose behind it that’s not getting used as fast as possible.”

The Lamont administration estimated that tens of thousands of people had scheduled a first-dose appointment on Monday but could not provide an exact figure.

With additional vaccine shipments coming this week, state officials said clinic hours could be expanded to offer more appointments. Connecticut leaders have also added staff to the state’s call center, bringing the total number of workers to 300. The phone line can field up to 1,050 calls at a time and is open from 8 a.m. to 8 p.m. seven days a week. The number is 877-918-2224.

Appointments can also be made by contacting Hartford HealthCare, UConn Health, Yale New Haven Health, and Trinity Health of New England, among other providers, by accessing MyCharts or by registering with the Vaccine Administration Management System (VAMS).

In addition to the regular shipments of the Pfizer and Moderna vaccines, the state is expected to get 30,000 doses of the new Johnson & Johnson shot this week. Lamont said he was unsure if there would be a different protocol for how and where the new vaccine is to be used. It does not require ultra-cold refrigeration or two doses.

“We haven’t gotten CDC guidance on it yet,” he said. “But right now we have three vaccines that really work, keep you out of the hospital and keep you from dying. That’s what you have to know.”

Geballe said some of the Johnson & Johnson supply would be directed to local health districts, which are setting up clinics for teachers and other education staff.

During a meeting of the federal Advisory Committee on Immunizations Practices (ACIP) Monday, the issue of vaccinating based on age, rather than prioritizing frontline workers and people with underlying conditions, was discussed. Connecticut is one of few states in the country to switch to an age-based schedule.

ACIP’s chairman, Jose Romero, was adamantly against vaccinating by age, saying: “It’s an easier way to vaccinate, but it abandons any effort to use equity as a guiding principle.”

The committee didn’t take any votes Monday, but it received several updates from CDC personnel. They have recommended that frontline essential workers such as grocery store employees, as well as those with pre-existing conditions, get the vaccine.

As the vaccine rollout progresses, the Lamont administration has identified 50 ZIP codes that are deemed “socially vulnerable,” meaning they are densely populated, have multi-generational housing and are considered high poverty. The state has instructed providers to administer 25% of their vaccines to people from those areas.

Hover over a town for details. Denominators sourced by 2019 Department of Public Health estimates of population by town by age. Priority ZIP codes determined via Centers for Disease Control and Prevention’s Social Vulnerability Index.

Lamont said Monday, however, that there were no penalties for providers who don’t comply.

White residents continue to be vaccinated for COVID-19 at a higher rate than Black residents in Connecticut, data released last week show.

At least 39% of white residents have received a first dose, compared to 21% of Black residents and 27% of Hispanic residents, according to state figures. But calculating the vaccinations rates is difficult, as only about two-thirds of those 65 and older who have received at least a first dose reported their race.

“We’re … making sure that no disadvantaged, underserved community is left behind,” Lamont said. “These are communities that have suffered the hardest over the course of COVID. And for some of the communities, it’s not as easy to get vaccinated. So our goal is to make sure we have everybody equally vaccinated.”