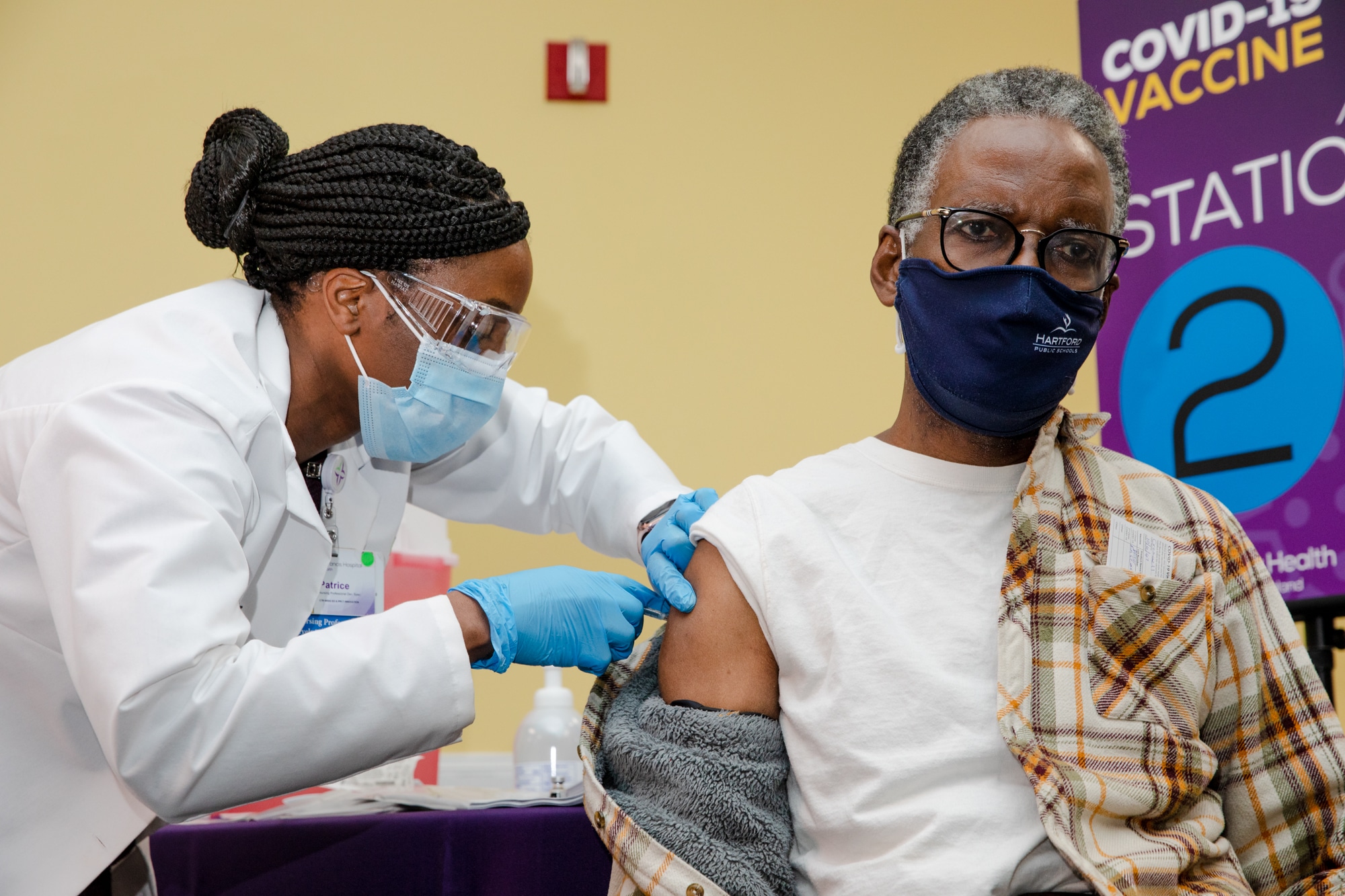 Stanwyck Cromwell, of Bloomfield, right, receives the first dose of COVID-19 vaccine at the First Cathedral Church in Bloomfield.

White residents continue to be vaccinated for COVID-19 at a higher rate than Black residents in Connecticut, data released Thursday suggest.

Only about two-thirds of those 65 and older who have received at least a first dose reported their race, so calculating the vaccination rates of different racial groups is difficult. But according to the data that was recorded, at least 39% of white residents have received a first dose, compared to 21% of Black residents and 27% of Hispanic residents.

Overall, about 40% of the 65-74 age group has received at least once vaccine, along with 68% of the 75-and-older age group, according to state data.

The numbers mirror trends in data released earlier this month, which also showed significant gaps in vaccination rates between white residents and people of color.

Hover over a town for details. Denominators sourced by 2019 Department of Public Health estimates of population by town by age.

The race analysis is further complicated by the fact that many vaccine recipients recorded no race, “other” or “multiple races.” The number who reported “multiple races” far exceeds the number of mixed-race individuals in the state, according to estimates from the U.S. Census.

“The data show us that what’s happening around the country is happening here in Connecticut,” said Max Reiss, Gov. Ned Lamont’s spokesman. “We have to keep doing more to reach our communities of color and our diverse populations all over the state – those populations that have been historically at higher risk, not just during COVID, but going back decades and decades, even centuries, when it comes to health inequities.

The state issued a memo to providers earlier this month urging them to do a better job of gathering data on race and ethnicity, the CT Mirror reported.

Connecticut is one of 35 states that has reported data on COVID vaccinations by race, according to an analysis by the Kaiser Family Foundation. Nationally, the Centers for Disease Control and Prevention estimate that race data were available for 54% of people who have received at least one dose.

The state has also released figures on vaccine recipients aged 16 to 65. But people who have received a shot in that age bracket are likely to be health care workers or nursing home staff, and without the racial breakdown of eligible populations in that age group, it is difficult to draw meaningful conclusions about those numbers.

An analysis released by the state found that individuals who lived in towns with a “highly vulnerable” census tract were less likely to be vaccinated. The CDC ranks census tracts across the country based on a Social Vulnerability Index that takes into account 15 different demographic factors, including age, race and living situation.

In the coming days, the state is expected to release numerical targets for providers to promote equity, though it is unclear what form those will take.

Daily positivity rate drops, along with towns in ‘red zone’

Connecticut’s COVID-19 positivity rate dipped to 2.12% on Thursday, down from 3.14% a day earlier. The state logged 23 additional deaths, though the number of hospitalized residents declined by 16, to 495. In total, Connecticut has recorded 7,595 COVID-19-related fatalities.

Click on a circle to see the town’s trend line since the state began reporting 14-day case rate data on 10-22. Case rates are calculated in the two weeks prior to the date the data were reported; towns with fewer than five cases are in the grey zone. Nursing home residents and incarcerated people with COVID-19 are not included in the data. Figures updated weekly.