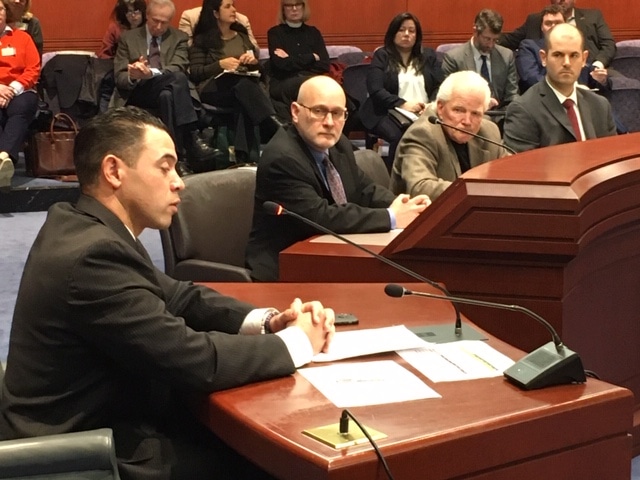 The administration of Gov. Ned Lamont chose a public venue Tuesday to tell lawmakers it has a tentative deal with the Mohegan Tribal Nation, one of the state’s two tribal casino owners, over how to structure, regulate and tax sports betting and online gambling in Connecticut.

The unexpected disclosure made by Paul Mounds, the governor’s chief of staff, immediately put pressure on the other tribe, the Mashantucket Pequots, to come to terms, a necessary step for the broad gambling expansion envisioned by the administration.

Essentially, Mounds was placing the final chapter of negotiations before the public at a hearing carried live on CT-N.

It initially was unclear if Rodney Butler, the tribal chairman of the Mashantucket Pequots, was aware of Mounds’ intention. He was the next witness in a legislative hearing conducted via Zoom, and he began by taking a long sip of water.

“It took me a minute,” Butler conceded later.

In his testimony, Butler downplayed the remaining differences in the talks that resumed in November and grew serious in December, overseen by Mounds and led by the governor’s economic advisor, David Lehman, and budget chief, Melissa McCaw.

By nightfall, after the administration released the terms of the deal, Butler struck an angrier tone, accusing the administration of bad faith, ignoring that its erstwhile allies, the Mohegans, had sided with the governor in pressing for a resolution.

The Mohegans issued an upbeat statement.

“We’ve said in recent days that we are confident an agreement could be reached on sports and online gaming,” said Chuck Bunnell, chief of staff for the Mohegan Tribe. “There is a framework agreement with our tribal nation that would meet those goals, allowing Connecticut to offer both sports and online gaming options, just as states around us are doing to the benefit of their local economies.”

The drama unexpectedly played out before the Public Safety and Security Committee, which has jurisdiction over gambling legislation, suggesting a conclusion was close in negotiations that have proceeded fitfully since Lamont took office two years ago.

Talks broke off in 2019, then resumed only to break off again last March. The governor’s position then was that sports betting be allowed at the two tribal casinos and that rights to sports bookmaking outside the casinos be opened to the tribes, the CT Lottery and Sportech, the licensed vendor for off-track betting.

On Tuesday, the administration officials offered few details of the tentative deal, including tax structure and the role of CT Lottery, which wants to take sports bets and move sales of lottery tickets online. Butler later told reporters that the administration was lobbying hard for the lottery to share in sports betting.

But what they described in general terms would be the largest expansion of legalized gambling in Connecticut since the two tribal casinos, Foxwoods Resort and Mohegan Sun, opened in the 1990s and flourished in what then was an exclusive market between Boston and New York.

“First and foremost, the future of gaming is now. We as a state need to modernize our gaming. And that means a comprehensive bill with a significant long line in enabling online” gambling, said Lehman, the former Goldman Sachs partner who is commissioner of economic and community development.

“If you look at New Jersey on the sports betting side, they had $400 million in gross gaming revenue in sports betting — 92% of that was online,” he said. “And so the point I’m making is that the world is clearly moving online.”

In the early 1990s, in return for a 25% share of gross slots profits, Connecticut gave the tribes exclusive rights to casino games, a deal that has produced more than $8 billion in revenue to the state over the past quarter century while complicating any step toward expansion.

The tribes assert sports betting is a casino game and that the exclusivity agreement and revenue-sharing deal have induced the state to negotiate over who shares in sports betting. The administration has signaled it sees CT Lottery as a player.

While Butler was displeased at Mounds making the status of the negotiations public, he agreed with Mounds’ assessment that a deal was close, with detailed terms set for the first time. Butler also said he was in full support of the administration’s insistence on sweeping change.

In recent years, any effort by lawmakers towards broadening gambling was thwarted by the inability of the state and tribes to come to terms. But that did not stop lawmakers from proposing expansion bills every year, to no effect.

“It’s a little bit like Groundhog Day, that every session we take up something similar,” said Rep. Pat Boyd, D-Pomfret. “But I think that the big difference is, you know, the administration’s leading this time.”

While the state’s relationship with the tribes has been the most complicated aspect of gambling expansion, lawmakers made clear Tuesday they had other concerns, including the prospect of more problem gambling if every smartphone and laptop becomes a portal to the lottery, bookmaking and casino games.

“We’ve had some conversations about that. We’ve not extensively discussed that. But we’re aware of the benchmarking and what other states are doing,” Lehman said. “We agree that that needs to be part of the comprehensive legislation when it’s done.”

“This is a concern of mine,” said Sen. Dan Champagne, R-Vernon. “I know right now, I know that both the tribes put in more money than anybody else to deal with this situation. But I think gambling from somebody’s home, gambling online is going to draw even more problems. And I want to be able to make sure that whenever this is put into place, that there is enough money to start dealing with people that fall into that trap.”

Rep. Al Paolillo, D-New Haven, asked how the state would include Sportech, the OTB vendor.

Lehman made clear that no other gambling interest came close to the tribes, as far as the state was concerned.

“The tribes are the significant gaming presence in the state,” Lehman said. “It’s critically important in our mind that we reach agreement with the tribes as the first step. We certainly understand there are other stakeholders and participants in the state.”

The last piece of a deal aimed at legalizing sports betting and online gambling in Connecticut fell into place Thursday.

Backed by Gov. Ned Lamont, the once-troubled CT Lottery has a shot at online sales -- and possibly more.