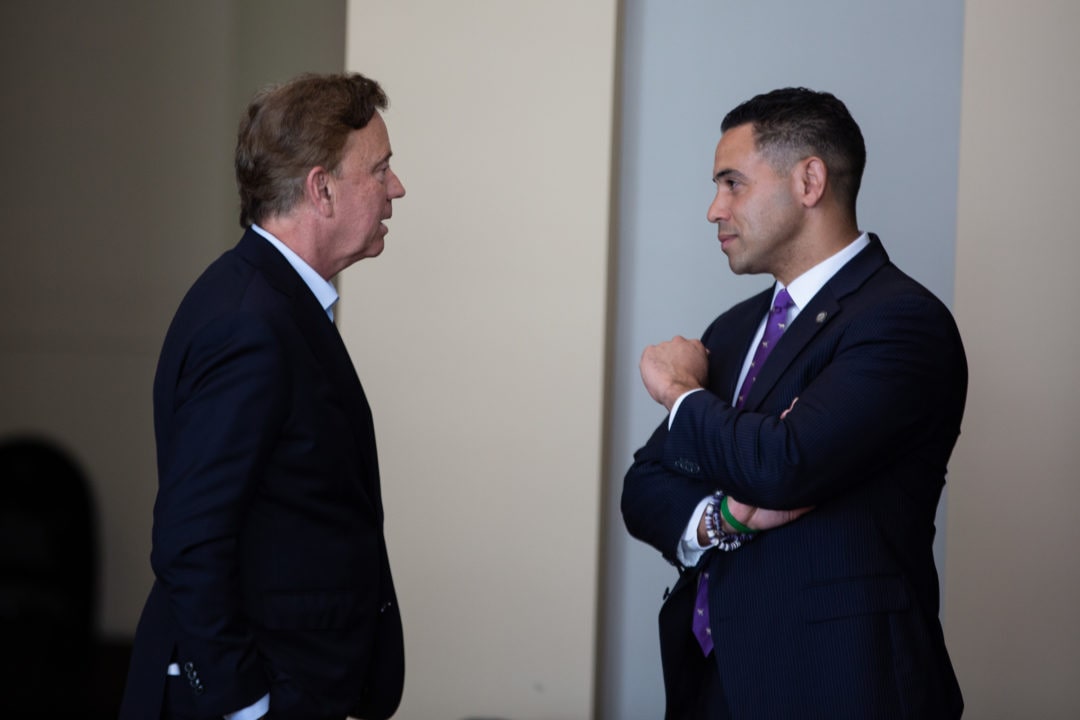 Gov. Ned Lamont and Rodney Butler, the chairman of the Mashantucket Pequot tribal nation, as sports-betting talks broke down for the first time, in 2019.

The last piece of a deal aimed at legalizing sports betting and online gambling in Connecticut fell into place Thursday with the Mashantucket Pequots accepting a revised version of terms unexpectedly announced two weeks ago by Gov. Ned Lamont and the Mohegan Tribal Nation.

If approved by the General Assembly, the 10-year deal would open Connecticut to its greatest expansion of gambling since the opening of the two tribal casinos, Foxwoods Resort and Mohegan Sun, by making every smartphone and computer a portal to casino games and CT Lottery sales.

“Connecticut is on cusp of providing a modern, technologically advanced gaming experience for our residents, which will be competitive with our neighboring states,” Lamont said in a statement.

The state itself would join the two federally recognized tribes in the sports betting business, taking wagers on sports through the CT Lottery.

One of the sticking points two weeks ago was the 20% tax the state proposed to collect on iGaming, the term for offering casino games online. The Mohegans agreed, but the Mashantucket Pequots wanted an 18% rate.

The compromise: An 18% rate for five years, then a bump to 20% for at least the next five years.

The state also would collect a 13.75% tax on sports bets placed with the casinos, online or in person, rates the administration says match or exceed what is collected in other states where sports betting and online gambling are legal.

The tribes formally agree to give up plans to jointly construct a satellite casino in East Windsor for the life of the deal, a project that had been all but abandoned for the foreseeable future.

In a joint press release, the Lamont administration and tribes ignored the tensions of the past two weeks when the Mashantucket Pequots tribal chairman, Rodney Butler, publicly complained of being disrespected by Lamont and the Mohegans.

“We’re proud of this landmark agreement with the State of Connecticut that cements a historic moment for our Tribal Nation,” Butler said. “This agreement bolsters the state’s economic development and growth, and allows us to develop a stable economic foundation for the future of our tribal community.”

The Mohegans, who had signaled their impatience with the Pequots by signing on to the earlier version with the administration, were similarly upbeat. The joint release read like a diplomatic communique.

“The Mohegan Tribe is very thankful to our partners in government, both the Mashantucket Pequot Tribal Nation and the State of Connecticut, for reaching collective agreement on a path forward for modernizing our state’s gaming entertainment industry,” said James Gessner Jr., the chairman of the Mohegan Tribal Council.

Lamont complimented both tribes, then looked ahead to the passage of a bill, the revision of the state’s gambling compacts with the tribes and the approval of those revisions by the federal Bureau of Indian Affairs.

“Our state’s tribal partners have worked with my administration thoughtfully, deliberately, and in a constructive fashion for the past few months, and we have achieved an agreement that is best for Connecticut residents and their respective tribal members,” Lamont said. “We will work to see it ratified and look forward to doing so through a collaborative effort, to include working with elected leaders in the General Assembly.”

With the Mohegans in agreement on how to structure, regulate and tax sports betting and the Mashantucket Pequots close to a deal, the Lamont administration played hardball at a legislative hearing two weeks ago.

The governor’s chief of staff, Paul Mounds, told lawmakers the administration had a deal with one tribe, the Mohegans. Six hours later, the administration and Mohegans issued a joint statement aimed at pressuring the Mashantucket Pequots.

As was the case then, the state’s off-track betting vendor, Sportech, would have no share in the revised deal of the most lucrative piece of sports betting: Offering an online book, or skin, as it is known in the gambling industry.

Instead, the Lottery would be permitted to offer a sub-license to Sportech, allowing it to accept bets at up to 15 locations. Sportech has threatened to sue.

The administration, tribes and lottery will have to address concerns by some lawmakers that turning every smartphone and laptop into a gaming device will increase problem gambling.

David Lehman, the governor’s economic adviser and one of his two negotiators with the tribes, assured lawmakers at the hearing that problem gambling will be addressed.

“We’ve had some conversations about that. We’ve not extensively discussed that. But we’re aware of the benchmarking and what other states are doing,” Lehman said. “We agree that that needs to be part of the comprehensive legislation when it’s done.”

In the early 1990s, in return for a 25% share of gross slots profits, Connecticut gave the tribes exclusive rights to casino games, a deal that has produced more than $8 billion in revenue to the state over the past quarter century while complicating any step toward expansion.

The tribes assert sports betting is a casino game and that the exclusivity agreement and revenue-sharing deal have induced the state to negotiate over who shares in sports betting.

Lamont has tried for a deal on sports betting since taking office in January 2019.

Talks broke off in 2019, then resumed only to break off again last March. The governor’s position then was that sports betting be allowed at the two tribal casinos and that rights to sports bookmaking outside the casinos be opened to the tribes, the CT Lottery and Sportech.

Annual payments to Connecticut by the two casinos peaked in 2007 at $430 million and have fallen steadily in the face of casino expansion in Massachusetts, Rhode Island and New York.

The lottery surpassed the casinos in revenue to the state in 2013. It produced $312 million for the state that year, compared to the casinos’ combined total of $296 million. In 2019, the last year before the COVID-19 pandemic depressed sales, the lottery produced $370 million; the casinos, $255 million.