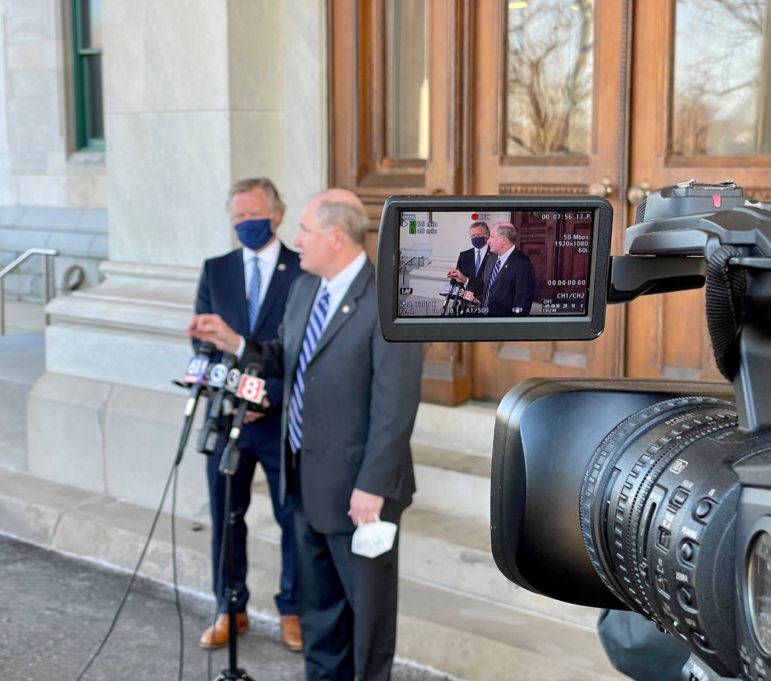 Senate Minority Leader Kevin Kelly, R-Stratford, (at microphone) speaks outside the state Capitol on the need to phase out emergency powers granted to Gov. Ned Lamont.

With the Democrat-controlled legislature expected to extend Gov. Ned Lamont’s emergency authority into late May, Republicans charged Tuesday that a once-necessary response to the coronavirus has evolved into a system to avoid transparency in government.

“Our system of government is not wired for one-system rule,” Senate Minority Leader Kevin Kelly, R-Stratford, said during a mid-morning press conference outside of the Capitol.

“There is no reason we can’t open this building like we’re opening the rest of Connecticut,” Kelly added. “This is the people’s government. They have a right to be part of this process, but this process has been nothing but exclusionary.”

But Democrats fired back that Connecticut has used technology over the past year to open government to the public as never before. Democratic lawmakers and the Lamont administration also cautioned that Connecticut could jeopardize its access to key pockets of federal aid if it doesn’t have its own emergency procedures in place.

At issue is the emergency authority that legislative leaders have granted Lamont since shortly after the coronavirus pandemic struck Connecticut last March, as well as the dozens of executive orders the chief executive has issued since then.

Legislative leaders extended that emergency power last September and again in January, and it is scheduled to expire on April 20. But leaders now say the House will vote as soon as Thursday — and the Senate not long after — to push that expiration date back to May 20.

Connecticut is the midst of a statewide COVID-19 vaccination effort that is being run in accordance with a Lamont executive order. House Speaker Matt Ritter, D-Hartford, said it remains doubtful whether lawmakers could complete their review of this and the dozens of other orders Lamont has issued over the past 12 months before April 20.

Legislators effectively can’t remove the governor’s emergency powers without deciding which orders to keep, which to modify and which to repeal.

Ritter also noted the state relied on executive orders last fall to administer absentee ballots during the November elections and must rely on those same orders to get through another round of balloting this spring.

A minority of Connecticut municipalities hold local elections on the first Tuesday following the first Monday in May, and local election officials need a set of rules now to prepare for those contests.

“There is not the time” for the legislature to review Lamont’s orders, draft potential changes and adopt them, the speaker added.

The administration and Democratic legislators also have noted that certain categories of federal aid — including food stamps or grants administered by the Federal Emergency Management Agency — specifically were enhanced to serve states that have declared a public health emergency.

Could dollars from Washington be held up if Connecticut has a state of emergency — and a governor whose ability to act quickly is hindered?

“The governor’s office doesn’t want to put at risk any potential FEMA reimbursement or other benefits that have helped residents during the pandemic,” said Lamont’s communications director, Max Reiss.

But House Minority Leader Vincent Candelora, R-North Branford, told the CT Mirror on Tuesday that legislators wouldn’t be struggling with these last-minute questions had they complied with his request to begin a review of Lamont’s orders back in January.

“This is about how we transition back to the normal functioning of our three branches of government,” said Candelora, who said Connecticut largely has behaved like a “monarchy” for the past year. Lamont has been the king, and his fellow Democrats in legislative leaders offered advice behind closed doors, Candelora added.

For example, the administration largely decided upon a strategy to reopen Connecticut businesses partially last summer, as COVID-19-test infection rates dropped considerably, by consulting with an advisory panel that met privately.

A similar process was followed last month when Lamont announced that the vaccine rollout would be distributed almost entirely based on age after health care workers and emergency personnel had been covered. That decision drew sharp criticism from the Connecticut branches of the American Civil Liberties Union and the NAACP.

“What this process has allowed them to do, for the last year, is make decisions in secret,” Candelora added.

But both Ritter and Senate President Pro Tem Martin M. Looney, D-New Haven, pushed back on that charge.

Looney noted that the legislature has live-streamed an unprecedented number of public hearings, committee meetings, press conferences and other events during the pandemic.

This policy particularly has enabled many people to testify at hearings when normally they couldn’t travel to the Capitol because of work or family obligations or health issues.

The Republicans are “desperately seeking and grasping and searching for an issue where none exists,” Looney added.

Ritter also said Candelora’s charge is unfair. Democratic legislative leaders already have agreed to the GOP’s request that any further extension of Lamont’s emergency authority be decided by a full vote of the House and Senate, rather than just be decided by a panel of leaders, the speaker said.

Ritter also noted that some in the GOP are arguing to return fully to normal business. That would expose the Capitol daily to hundreds of legislators, staffers, lobbyists, journalists and members of the general public — even though a majority of Connecticut residents still haven’t been fully vaccinated against the coronavirus.

“Unfortunately for the moderate Republicans, they will have to listen to some of their colleagues from the freedom caucus who will talk about how masks and vaccines don’t work,” Ritter added.

In other business Tuesday, the Senate unanimously approved a bill to ensure the legislature has an equal voice with Lamont in carving up billions of dollars in new federal pandemic relief headed Connecticut’s way.

The measure also directs the administration to give lawmakers a detailed accounting of how federal coronavirus aid has been allotted to date.

The bill, lawmakers asserted, is not a “power grab” or an effort to battle Lamont for control of the American Rescue Plan Act funds authorized by Congress and President Joe Biden earlier this month.

Police use of force bill passes

The Senate also voted Tuesday for final passage of a bill that would delay changes mandating when police can use deadly force. The new effective date of Jan. 2, 2022 is meant to provide more time for training.

The use of force mandates were elements of a police accountability bill passed last summer.