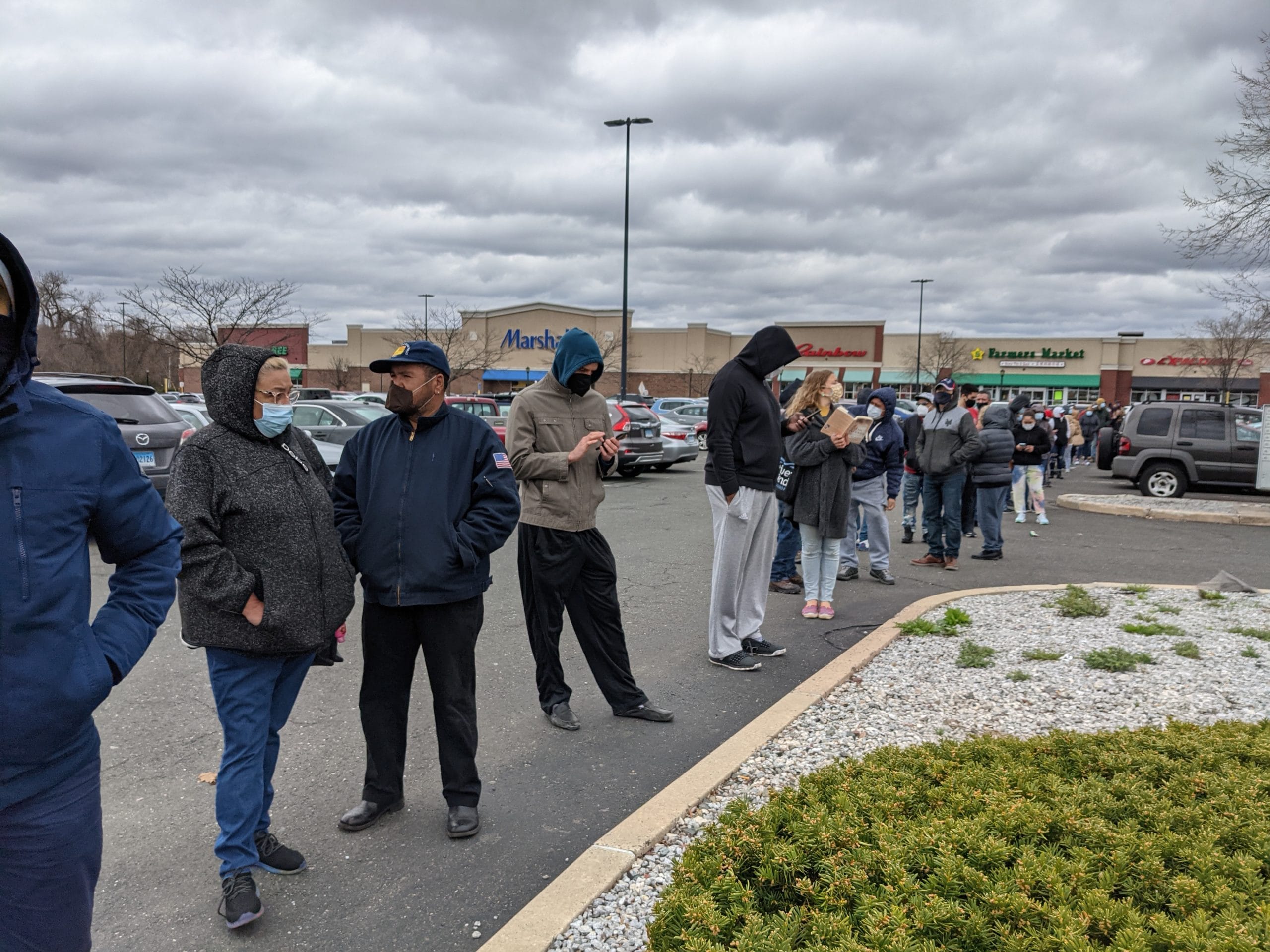 Hartford residents line up for COVID-19 vaccinations Thursday, the first day of eligibility for anyone 16 or older. The pop-up clinic in a shopping center parking lot inoculated 260 people with the one-shot Johnson & Johnson vaccine.

State officials Thursday credited Connecticut’s success in vaccinating vulnerable older residents for keeping the state’s recent COVID-19 death rate among the lowest in the United States, even as new cases put the state at the center of a regional hotspot.

On a day when the last demographic, ages 16-44, became eligible for inoculations, the administration of Gov. Ned Lamont underscored the efficacy of the three COVID vaccines and Connecticut’s rollout, with 81% of those 65 and older being vaccinated.

The second of the governor’s twice-a-week COVID briefings delivered two messages: the first, a hard sell for the youngest cohort to get vaccinated, an easier task as vaccine is projected to exceed supply in coming weeks; the second, a validation of Connecticut’s approach.

Angela Hwang, a senior executive at Pfizer, joined Lamont to share the company’s latest data showing the vaccine it developed with BioNTech offers a high degree of protection for at least six months and is effective against the South African variant. Earlier, Pfizer announced its vaccine was safe and effective for children ages 12-15.

“So this is all very promising,” Hwang said. “And for us at Pfizer, we believe that science will win and that we will continue to gather more evidence on the safety and efficacy of the vaccine for all important populations.”

With some minor revisions, the Lamont administration has stuck with an age-based rollout of vaccine eligibility as the quickest way to vaccinate the most people, first 75 and older, then 65, 55, 45 and, now, 16. The older two cohorts account for most COVID deaths.

[Why an epidemiologist thinks Connecticut has its COVID vaccine priorities backwards]

Other states have used a mixed criteria of age and other risk factors presented by occupation and chronic illnesses, and Lamont’s approach drew complaints of insensitivity to persons with co-morbidities or jobs that carried a higher risk of exposure to the coronavirus.

On Thursday, the governor offered a rebuttal of sorts, if never mentioning the controversy. Instead, he noted that Connecticut was near the top of the list in new cases — the Centers for Disease Control and Prevention pegged it as fifth — and 35th in per-capita COVID death over the past seven days.

“So it’s just a reminder, I think, that vaccinating folks who are most at risk, vaccinating those who are most likely to suffer complications or death, made a big difference in terms of where we are in that chart,” Lamont said. “So I think that was worth remembering. It’s worth showing that vaccinations work.”

Connecticut reported 1,580 new cases Thursday, representing a 4.45% positivity rate of the 35,538 most recent tests. The seven-day rolling average is 3.7%. Hospitalizations decreased by 21 to 492.

With 14 new deaths, the number of fatalities attributed to COVID-19 in Connecticut since the start of the pandemic reached 7,900. 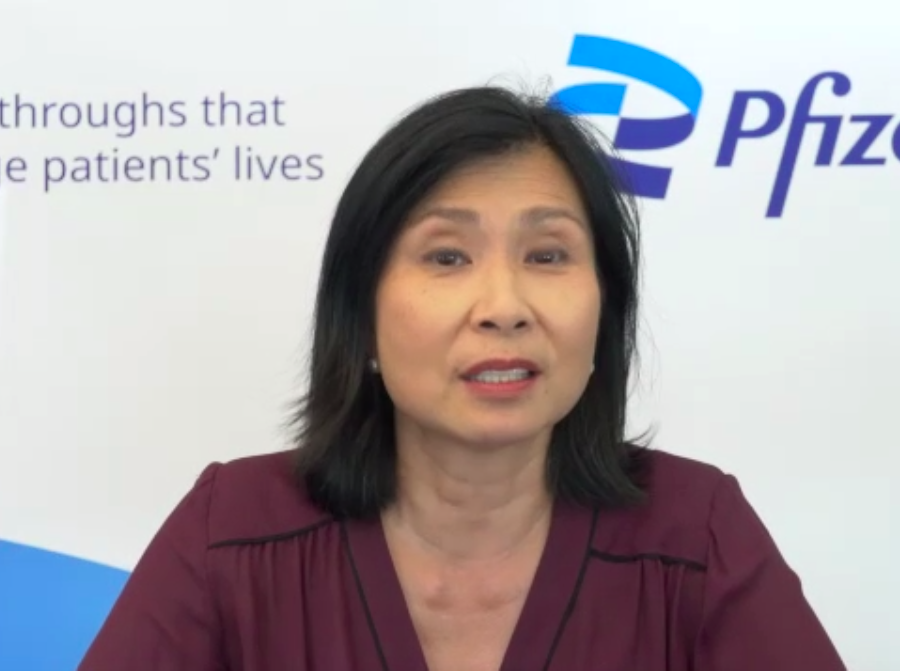 Angela Hwang of Pfizer joined the governor by video, saying the data shows her company’s vaccine is safe and effective for children.

“If the vaccines work as well as advertised, that’s exactly what you would expect to see. And we’re seeing it,” Geballe said. “So that’s the great news that we’ve been hoping for. You can see it in the nursing home data. We’ve had a grand total of five nursing home deaths in the last month — five in an entire month. So, you know, there’s evidence all around us right now how effective these vaccines are at breaking that relationship.”

Sixty-five percent of residents 45 and older and 43% of those 16 and older have received at least one shot. With vaccinations previously available to limited occupations, most notably health providers and more recently educators, a significant minority of people younger than 45 already have been inoculated.

“So it’s a very important reminder to younger people that you can still get very sick from COVID. And you need to take it seriously, and you need to wear masks when you’re around other people,” Geballe said. “But fortunately, those trends with regards to older people where we have these very high vaccination rates, we now have increasing evidence that these vaccines are incredibly effective, not just to preventing severe illness, but completely preventing infection to begin with.”

With eligibility no longer a limiting factor, the success in reaching urban and minority areas will turn on outreach. Hartford inoculated 270 residents Thursday under tents in the parking lot of a Walmart. No appointments were required, and the pop-up clinic offered one-shot Johnson & Johnson vaccines, requiring no follow-up.

The other vaccines, Pfizer and Moderna, require a second shot to be fully effective.

Hartford Mayor Luke Bronin was vaccinated with other city employees, his shot streamed on Facebook. Keith Grant, the director of infection protection at Hartford HealthCare, spoke to the employees there, warning that the virus has not gone away.

“The vigilance that got us to the point of security in the state of Connecticut, still maintain that vigilance, be aware of any symptoms, still get tested if you think you’re symptomatic or asymptomatic or have been exposed,” Grant said. “Social distancing, ensuring that you’re wearing your mask, is still very, very, very important.”

Grant was the second person vaccinated in Connecticut. With reporters and photographers recording the moment, he got his shot in a tent outside Hartford Hospital on Dec. 14, following the hospital system’s chief clinical officer, Dr. Ajay Kumar.

Lamont noted he was speaking on April Fool’s Day.

“And a year ago, we were fools when it came to COVID,” Lamont said.

Lamont said people were embracing hydroxychloroquine as a cure, and the president was ruminating publicly about ingesting Lysol and undermining the use of masks.

“And here we are one year since April Fool’s Day a year ago, and we’ve got about 40% of our population vaccinated with something that really works, and I think it’s a testament to maybe it takes us a while to get going,” Lamont said. “Our scientists are amazing, what they’ve been able to do, but it only works if you get vaccinated. That’s what that message was here today. We’re making extraordinary progress.”