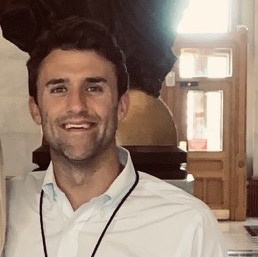 Nick Simmons, the point person in Gov. Ned Lamont’s office who helped provide laptops and internet access to every student in Connecticut after schools shut down last year, is leaving his post to be U.S. Education Secretary Miguel Cardona’s senior advisor for school reopening and recovery at the federal level.

As director of strategic initiatives in Lamont’s office for nearly two years, Simmons also helped set up a data dashboard to help track student attendance, COVID infections among school-age children and other key risk indicators during the pandemic. Essentially, he served as the lead from the governor’s office overseeing the effort to open schools as safely as possible by coordinating across multiple state agencies.

“It’s exciting to try and bring it up to the national level,” he said.

At the U.S. Department of Education, Simmons will be the person working with local officials and various agencies to help them reopen. The Washington Post reported last month that many local officials were unclear about whom to speak to on the federal level about reopening challenges.

“The first thing is the data tracking. That was critical,” he said. “Understanding schools that were open and weren’t allowed us to intervene to help support and see what they need. So tracking that nationally is one of the first to-dos.”

The Connecticut native is moving from Stamford to Washington D.C. next Wednesday.