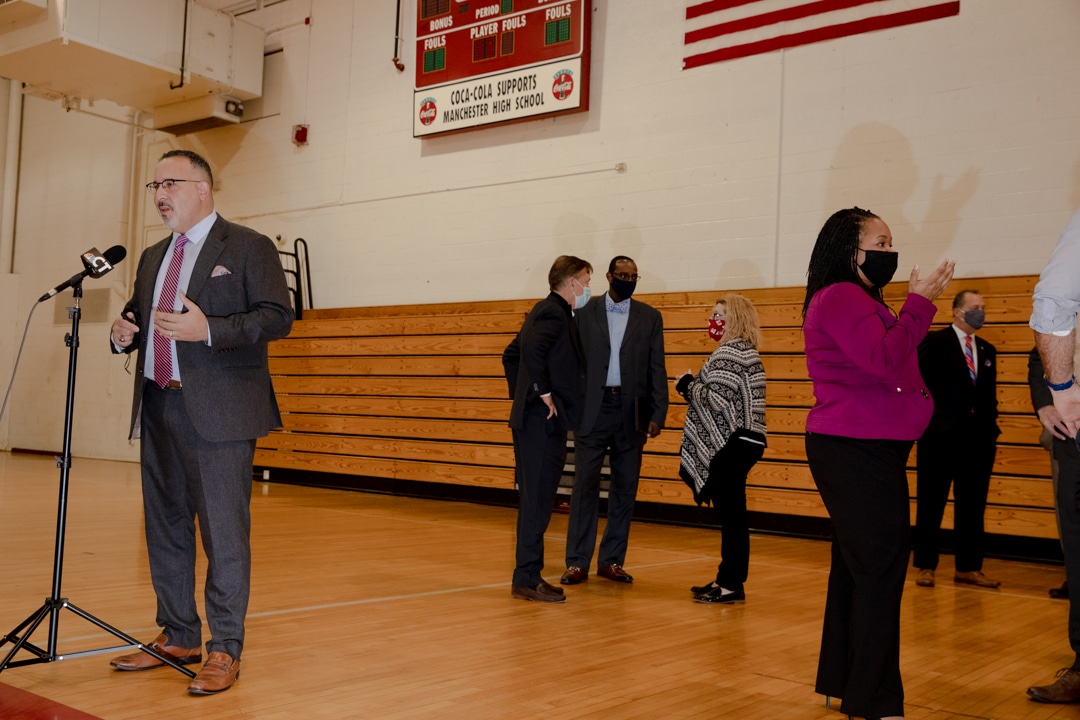 Dr. Miguel A. Cardona, Commissioner of Education, far left, answers questions from a reporter while others talk after the press conference. In the background, in a blue mask, is Gov. Ned Lamont. His budget chief, Melissa McCaw, is standing to the right in a fuchsia jacket.

Every public school student in Connecticut now has a laptop and access to high-speed internet so they can log in to school remotely during the pandemic, courtesy of $68 million in federal and philanthropic funding that purchased devices for the roughly one-out-of-every-four students in the state who didn’t have access to a computer.

In a high school gymnasium in Manchester that would have been bustling at this time last year, Gov. Ned Lamont and his education and budget chiefs gathered Wednesday to boast about the results of an analysis that shows Connecticut is the first state in the country to provide its public school students with universal access to learning devices.

“We celebrate and applaud this great accomplishment. The students and teachers who were starved for these devices now have them. We are reducing barriers to ensuring that kids can maintain a continuous strong education by making sure every student who did not have a device, that their need has been met. And we know that this could be life changing for some,” said Melissa McCaw, secretary of the Office of Policy and Management. “Connecticut has closed the digital divide.” 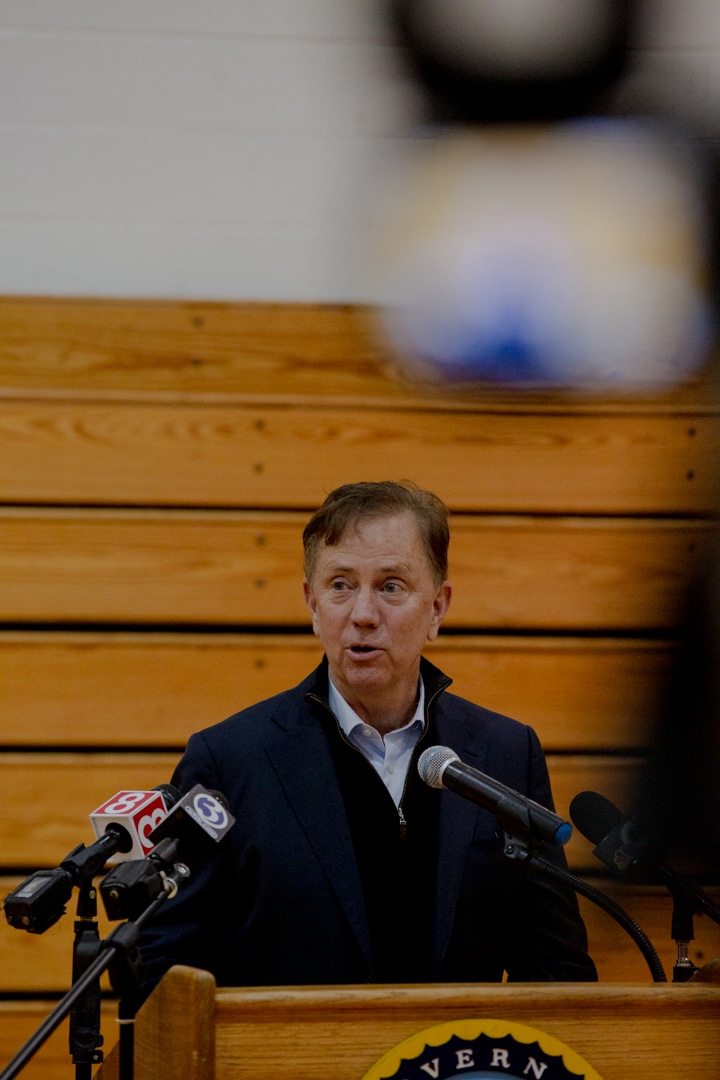 Gov. Ned Lamont provides an update on his administration’s Everybody Learns initiative, which launched in July. The funding has been used to purchase laptops and provide at-home internet service for students throughout Connecticut.

Heading into the pandemic, the lack of online access was especially rampant in the state’s cities, with about 40% of households in Bridgeport, Hartford, New Haven and Waterbury having no high-speed internet, according to Census Bureau data. Communities of color, low-income residents and older residents are most likely not to have connectivity in their homes: 35% of Hispanic households, 34% of Black households, 36% of low-income households and 36% of adults in the state over 65 do not have high-speed internet.

The state and billionaire philanthropist Barbara Dalio collectively have hooked up 142,000 students with laptops or tablets. The state also provided 44,000 students with internet connections, while Dalio is providing free wi-fi access in Hartford or Norwalk.

Th expanded access has made it possible for many of Kate Dias’s students at Manchester High School to successfully complete their work. When schools shut down unexpectedly last spring, students without computers or reliable internet were unable to fully participate. She also noted that she teaches math to teenagers, so lack of access is no longer a plausible excuse for missing class.

“There has been a dramatic shift in us being able to expect students to login,” the longtime high school math teacher said during an interview. “Look, I work with teens. They feel you out.” 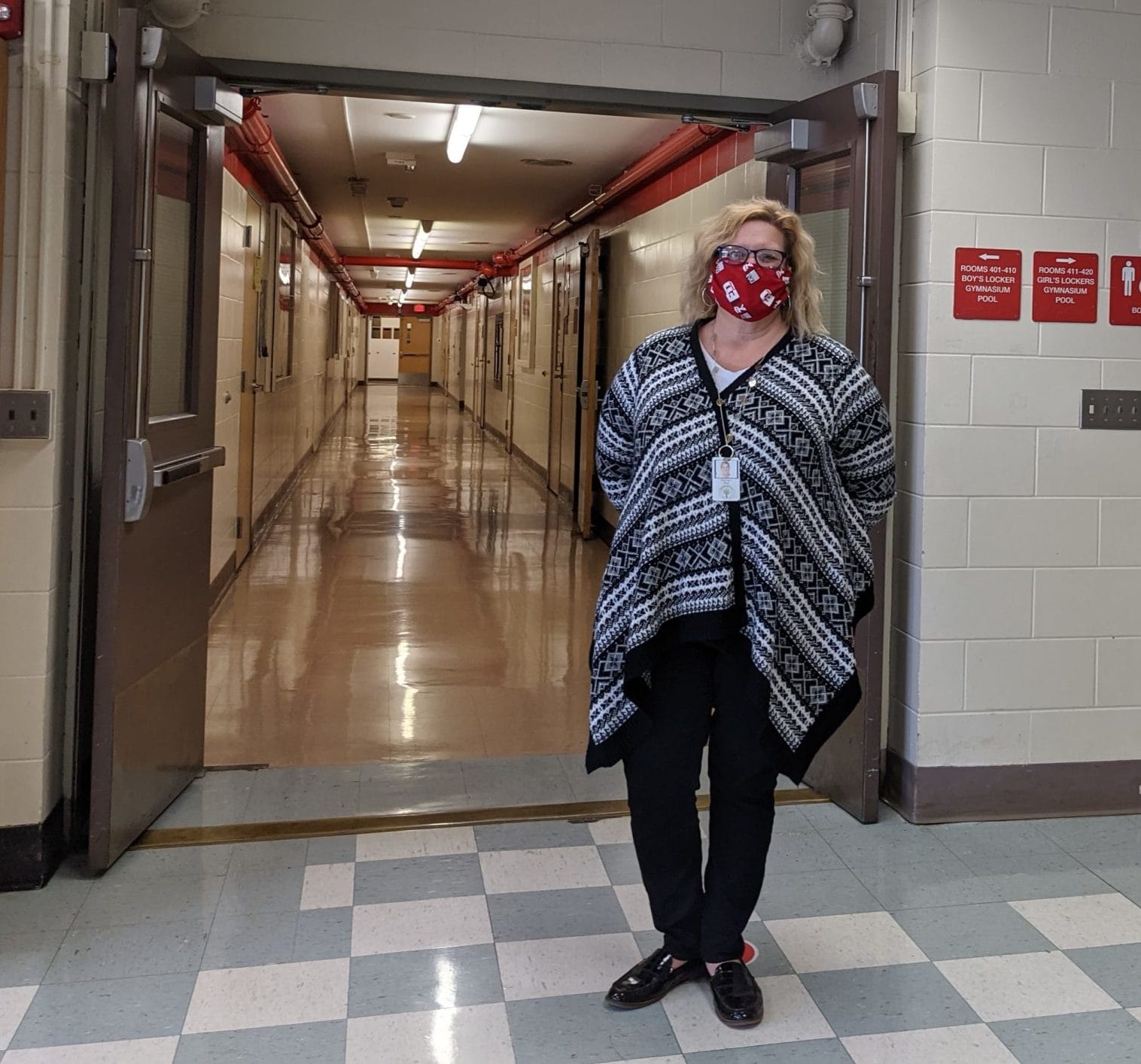 Kate Dias, a math teacher at Manchester High School, said students must have access to a computer to be successful in school.

Are students logging on, and are they learning enough online?

It won’t become clear how far behind students are falling during the pandemic until next fall. That’s when the state will release results from the standarized tests that students will take this spring.

Attendance data, however, may offer a preview.

That data shows that in October, just 24% of students statewide were scheduled to attend school fully in-person.

Awilda Reasco, a member of the State Board of Education, called the rate of homeless students attending class entirely remote “heartbreaking” during the board’s meeting Wednesday.

“Personally, I thought this was sort of the same group of kids, and it’s not. Superintendents are telling us this group of kids changes. So once they get some kids back engaged, there’s other kids that will drop off,”  he told the state Board of Education Wednesday.

The state’s education commissioner offered a blunt assessment of what districts and students are facing as COVID-19 moves more students online nearly every day.

“We know we’re in a health pandemic. We’re also in an educational crisis,” said Miguel Cardona, the state’s first Hispanic education commissioner, who joined Lamont and McCaw at the Manchester event Wednesday. “We know providing the right device, good connectivity in quality content will address that gap and provide those students who didn’t have it before the opportunity to have access to high quality content.”

The stakes couldn’t be higher, as Connecticut already has among the largest achievement gaps in the nation.

It will take some time to assess how the pandemic has impacted these gaps; the U.S. Department of Education announced last month it was postponing the “Nation’s Report Card,” which measures the gaps, until 2022.

Digital divide resolved, host of other problems prevent students from logging on

‘Ms. Dias, I have to go to work so I have to leave early today.’

This is just one of the many reasons students give this math teacher in Manchester for why they will be missing class.

The pandemic has left many more families jobless or underemployed, and Dias said she understands her students might be working to help feed their families or pay rent. Others might be babysitting for younger siblings and trying to juggle both their own and their siblings’ school work.

“When you enter the school building, you leave those demands behind. When you are at home that is often not possible,” she said.

Gov. Ned Lamont said universal access clears a major hurdle for these students, but acknowledged other systemic barriers — like poverty — that stand in their way. That’s why it is so important that schools offer in-person education as much as possible, he said.

“This is going to give everybody a fair shot,” he said. “We are just getting started.”