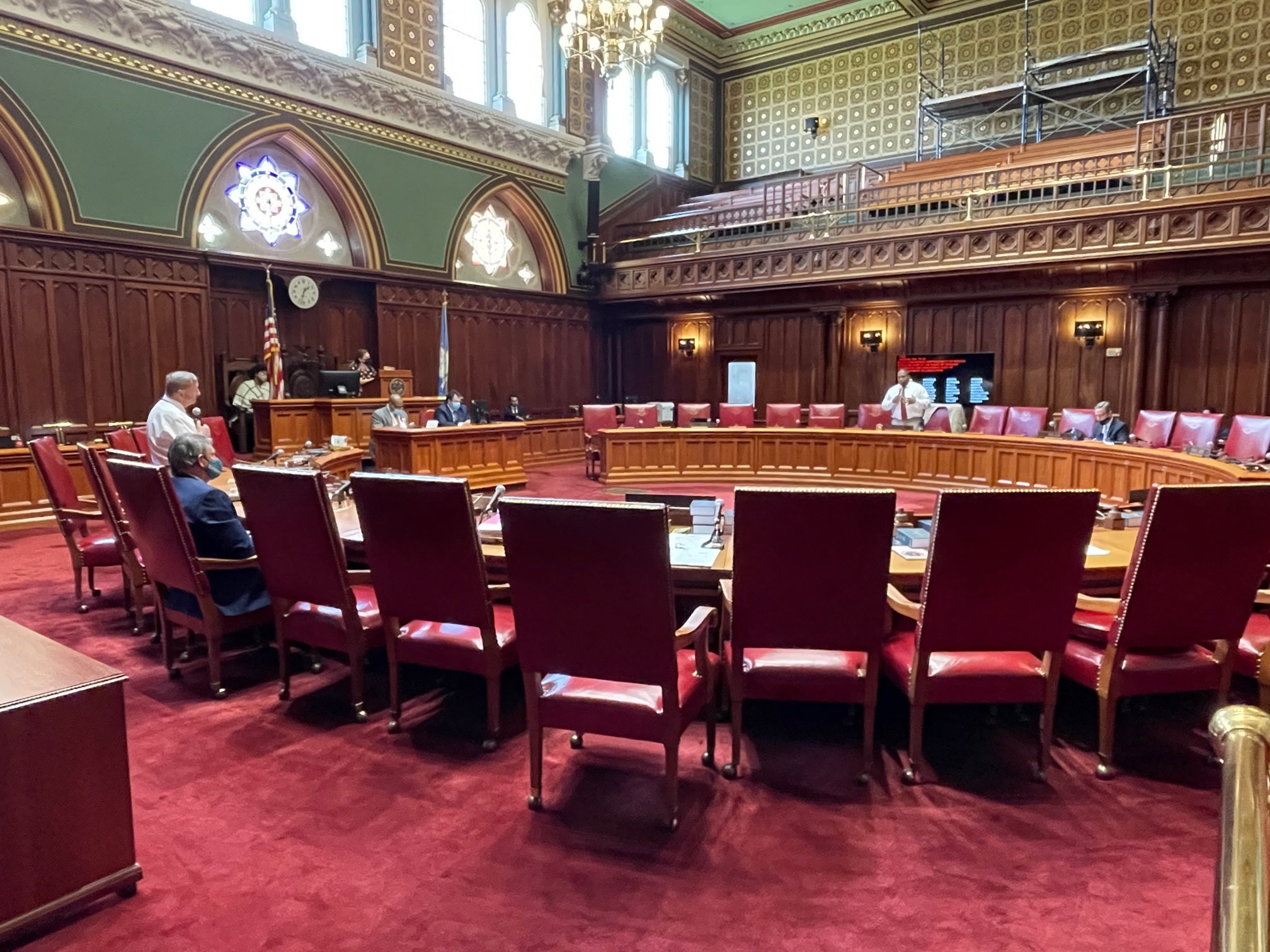 With an eye on the next pandemic, the state Senate voted 24-12 Wednesday to expand prisoners’ eligibility for release through compassionate parole.

“We got lucky because we didn’t have the number of people die that people suspected might die in our prisons,” Sen. Gary Winfield, co-chair of the Judiciary Committee and D-New Haven, said of the 19 people who died from COVID-19 while they were incarcerated.

Over the more than four hours of debate, Winfield framed the bill as a tool that would allow state officials to more easily grant release so incarcerated people don’t needlessly die behind bars.

“This is not a bill that imagines that we’re going to let everyone out of the prisons,” Winfield said. “This is a bill that imagines that at some point in the future — like the past year, unfortunately, that we have experienced — that we could find ourselves in a similar situation. And if we find ourselves in that situation, people who we have in our prisons who are not sentenced to life should not die because we don’t have a tool to use.”

The existing law on compassionate and medical paroles is extremely narrow. To qualify for compassionate release, an incarcerated individual must have served half their sentence and be so physically or mentally debilitated because of their age or medical condition that they are physically incapable of presenting a danger to society. Medical parole is a similar form of release, except the disease must be terminal, and there is no requirement on time served.

Elder and sickly members of the incarcerated population filed lawsuits during the pandemic to try and get out of prison so they wouldn’t catch COVID-19 while they were locked up. Few were successful due to the Board of Pardons and Parole’s limited statutory authority.

The proposal senators approved Wednesday lowers the threshold for certain conditions of release. Those who are so physically or mentally infirm because of age or disability could be eligible if they present “a significantly reduced risk” of danger to society — as opposed to the current, higher bar of being so sick that they are “physically incapable of presenting” a threat to the public —but they still would have to serve half their sentence to be granted compassionate release.

But it also empowers a three-member panel, as opposed to the Board of Pardons and Parole, to assess these parole applications during an emergency declaration or major disaster, including COVID-19. Releases during an emergency declaration may be done at any point in an incarcerated person’s sentence, if the circumstances of their incarceration pose a higher risk of harm than if they were to remain confined. The only people who would be ineligible are those convicted of capital felony or murder with special circumstances.

The BOPP supported the bill, proposing a few small changes to clear up ambiguity but otherwise supportive of expanding the scope of the board’s authority to “compassionately parole incarcerated individuals.”

Republicans on the floor expressed concern over how the bill would affect victims. Sen. Heather Somers, R-Groton, said she has received calls from survivors of domestic violence who were worried that those who had hurt them could be released under expanded eligibility criteria. Somers said she preferred the Department of Correction coming up with a “really strong emergency plan,” as opposed to “releasing people that have committed serious crimes, early, because of a pandemic.”

Sen. John Kissel, R-Enfield,  introduced an amendment that would have left in place a provision of the bill that extends whistleblower protections to DOC staff who report excessive uses of force committed by their colleagues but would have struck out the rest of the bill dealing with compassionate release.

“Victims have rights in the state of Connecticut,” said Kissel.

Winfield rejected the idea that a vote for the underlying bill was a vote against victims. He said he has been a victim of crime “more times than I have fingers and toes.”

“Everybody that I know is a victim of crime,” Winfield said. “Doesn’t mean I don’t care about the people who are in the prisons. I care about both sides. I think both sides are equally important.” 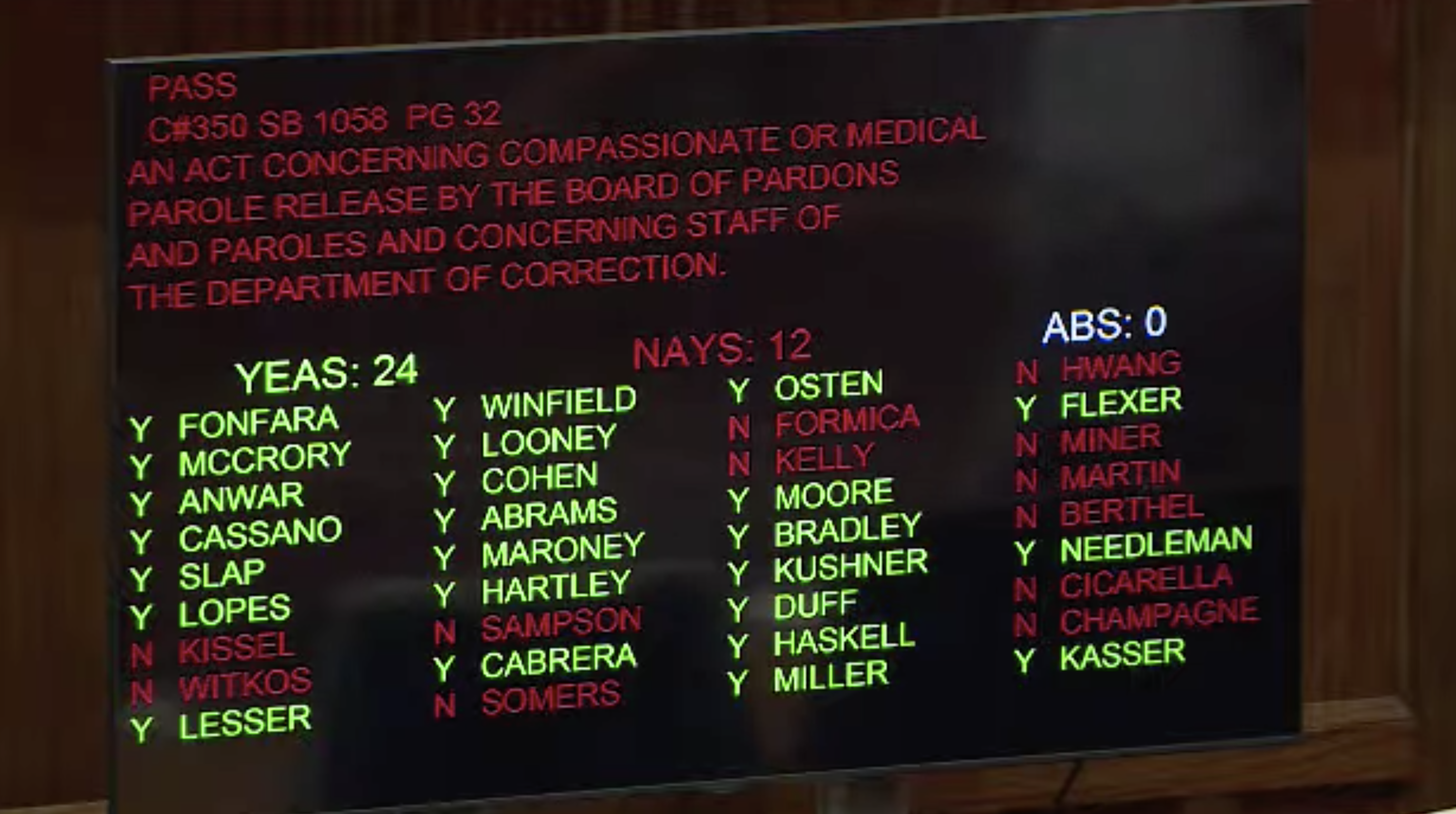 The Senate’s final vote on the compassionate release bill after almost four hours of debate.