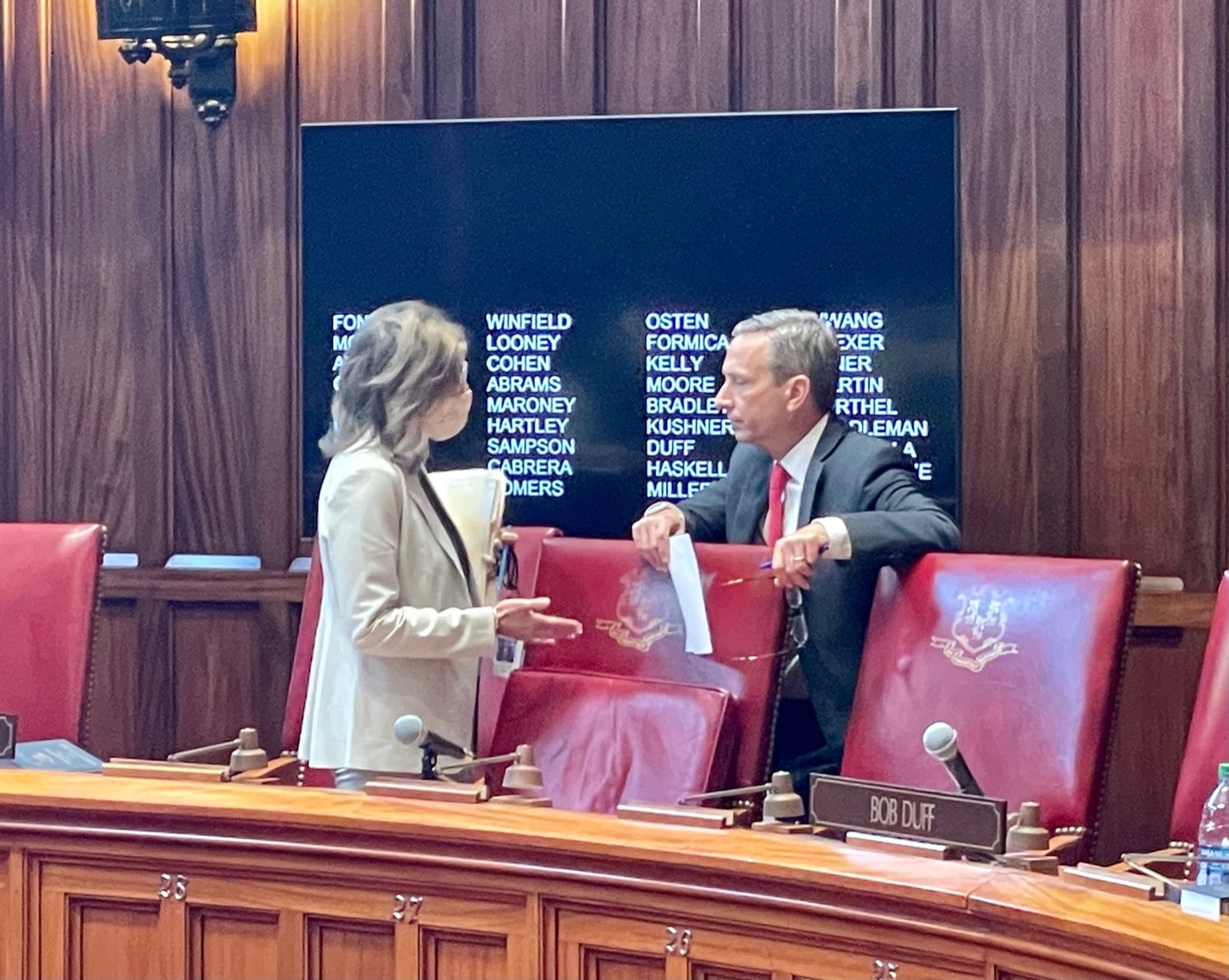 Sen. Julie Kushner, a former union executive now co-chair of the legislature’s labor committee, talks to Senate Majority Leader Bob Duff before taking up another of her bills.

The advance of an ambitious labor agenda in the General Assembly is delighting social-justice warriors energized by the tumult of the times — but it is rattling conservatives and some moderates fearful of Connecticut emerging from a recession branded as hostile to business.

A confluence of factors is driving the labor bills, beginning with Democrats reversing losses that had left them with a paralyzing tie in the Senate in 2017 and 2018, followed by the reckoning brought by COVID-19 and the death of George Floyd in 2020.

“The majority of the workers that are working for minimum wage in our state are working multiple jobs, and they are majority Black and brown people,” said Sen. Julie Kushner, D-Danbury, co-chair of the Labor and Public Employees Committee. “For someone who is advocating for workers and for labor, this is a great moment, because we can see real change coming.”

The House passed a bill requiring the disclosure of pay ranges to employees and applicants for those positions, an intended corrective to pay inequities that disadvantage women. A Senate-passed measure is aimed at protecting low-wage workers against late shift changes.

Both bills renewed the perennial debate over the degree to which a small state with a chronically soft economy should be the tip of the spear in a campaign against inequality in the workplace. It was a factor in the fights over paid leave and minimum wage laws.

“I talk to my counterparts in Massachusetts, New York, New Jersey,” said Scott Dolch, executive director of the Connecticut Restaurant Association. “No one is talking about this kind of bill. But we are.” Oregon is the only state with a similar law. Several municipalities, New York City included, have “fair work week” laws.

The Connecticut version  was rewritten in the Senate to focus on big-box retailers, national restaurant chains and fast-food franchises, but Dolch said his group still is opposed to the legislation. At least 2,400 of its 8,500 members are local owners of franchises.

Dolch is lobbying against passage in the House as ill-timed, given the industry’s losses during the pandemic.

“Is this really the time to pass this?” Dolch said. “I mean, that’s an honest question.”

Gov. Ned Lamont, a Democratic businessman sensitive to Connecticut’s reputation on Wall Street and in America’s C-suites, has pushed back at unions and legislative progressives on tax policy but largely has been their ally, or at least neutral, on labor issues.

Some Republicans speculated that the Lamont administration might try to dissuade the House from calling a vote on Senate Bill 668, the “fair work week” proposal passed by the Senate on a 20-16 vote, with four Democrats and all 12 Republicans opposed.

Administration officials say Lamont has been briefed and has no intention of trying to stop a House vote, especially since compromise language adopted in the Senate narrowed the focus.

House Speaker Matt Ritter, D-Hartford, who supports the bill, said his caucus is counting votes. “It could be tight,” he said.

Ritter said the compromise language, which also shortened from 14 days to 7 days the notice employers must give employees on schedules, makes more lawmakers comfortable with the bill.

“I think that compromise … brings people along. And the thought, really, is that there’s a difference in a national chain, and Joe’s Crab Shack in your local hometown,” he said.

Ritter said he weighed the inconvenience the bill might pose for employers against the impact on workers.

“I have constituents who have no car. So they take two buses to go to work. And they show up, they get told at six o’clock at night, ‘Yeah, you’re not gonna get your extra two hours of your shift.’ And then go back home,” Ritter said. “It takes them an hour and a half on two buses, and they were unpaid for that time. You know, when you’re making minimum wage, those two hours add up.”

Sen. Norm Needleman, D-Essex, a business owner and first selectman of his small town, was one the four Democrats to vote against the bill, despite considering himself a friend to labor.

“Some bills are a little more difficult for me, because we’re trying to, at times, fix problems caused by individual bad actors with bills that impact an entire business,” Needleman said. “In this case, they did improve it by going to larger-sized businesses. But I thought that it would be better to find a way to deal with the bad actors.”

Rep. Robyn Porter, D-New Haven, co-chair of the Labor and Public Employees Committee, said the intent of the bill is to set a standard “that hopefully will send a message to the bad players.”

Other labor bills to pass at least one chamber so far include measures strengthening the prevailing wage in construction and, more controversially, a bill intended to help public-sector unions maintain or grow membership.

On a 22-13 vote, the Senate approved and sent to the House a measure sought by organized labor as a counterweight to the 5-4 opinion issued three years ago in Janus v. AFSCME, which makes it easier for employees to benefit from union-negotiated wages without being a member or contributing to them.

Democrats won a 24-12 majority in 2020, and Republicans and Democrats agree that the labor bills, for better or worse, are a reminder that elections have consequences.

“They basically have showed that ‘We’re in charge. We’re gonna do what we want. And we’re going to reward those who helped us get here.’ And that’s exactly what this is, what’s going on,” said Sen. Dan Champagne, R-Vernon. 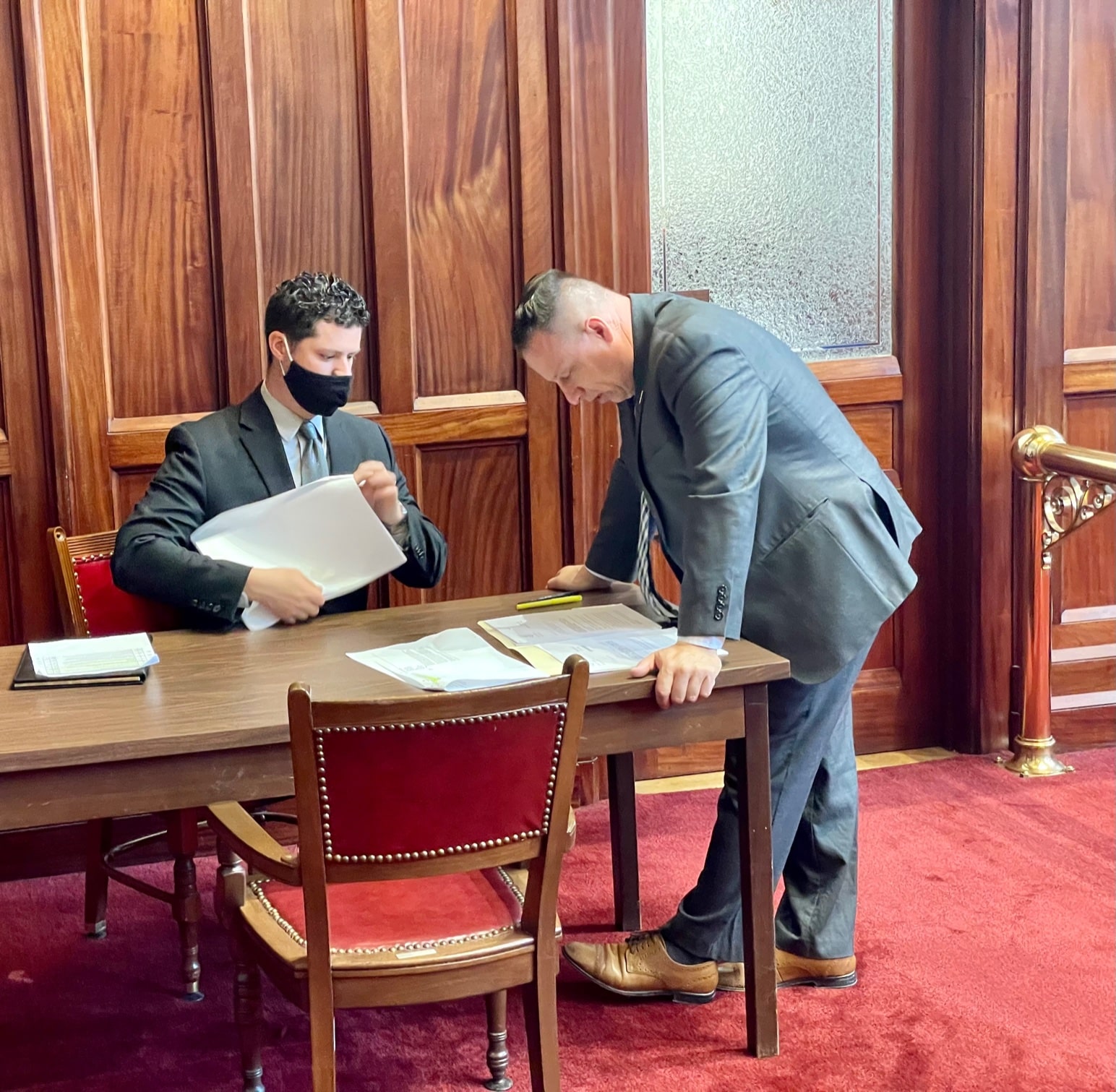 Sent. Rob Sampson, R-Wolcott, at right, prepares for a debate on a labor measure he opposed.

Champagne saw some of the bills as transactional.

“When you look at the stuff that’s being given to the unions, it’s basically, in my opinion, reward for helping them get elected,” Champagne said.

Sen. Rob Sampson, R-Wolcott, a free-market conservative, said he had hoped the state would take time to digest the impacts on business of the minimum wage and paid leave laws before pushing more initiatives. But he was not surprised they did not.

“The Democrats have the majority. I don’t expect them to stop trying to move the ball in their direction,” Sampson said. “They have an agenda, and they want to see the people that support them, and that they support benefit from policy decisions.”

If there seems a rush of labor bills, Senate President Pro Tem Martin M. Looney, D-New Haven, said there is a more prosaic reason: the 2020 session was lost to the pandemic.

“So there’s a lot of sort of pent-up demand, issues that have been pending and people advocating on them now for a couple of years,” Looney said. “And now they’re kind of all kind of cresting at the same time.”