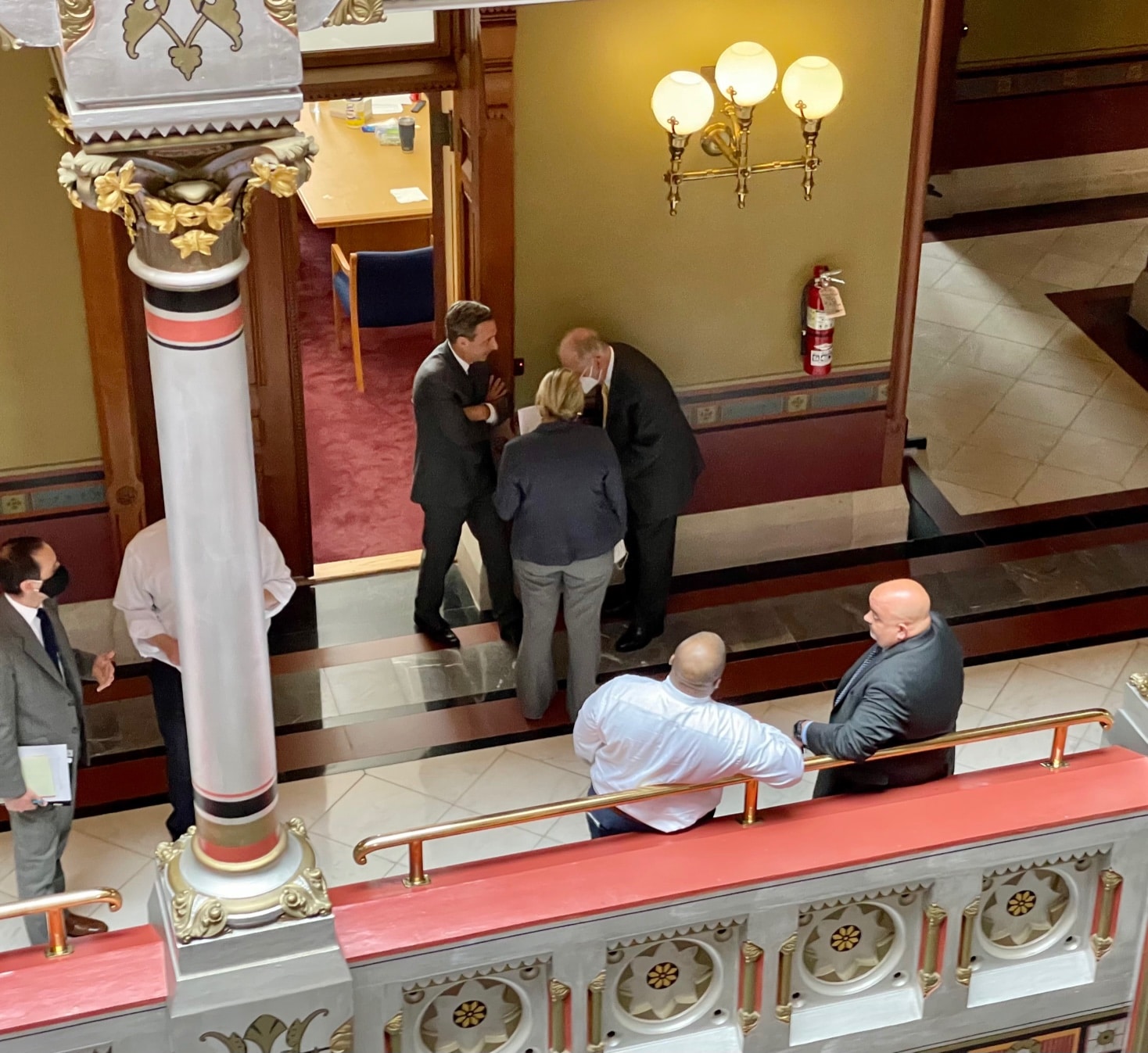 Questions of profit, preference and equity brought Senate debate of a marijuana legalization bill to a dramatic halt Tuesday, with the office of Gov. Ned Lamont vowing a veto over new language broadening the eligibility of applicants for licenses to produce or sell marijuana.

The Senate passed the bill, 19-12, without fully addressing Lamont’s concerns, throwing a carefully scripted special session into chaos on the eve of what was supposed to be final passage Wednesday by the House of Representatives.

An amendment adopted on a 26-4 vote expanded the definition of a “social equity applicant,” originally requiring a connection to a census tract disproportionately impacted by the war on drugs, to anyone with an adult or juvenile record for a marijuana offense.

One consequence of that change is it would have given preference for a license to a far broader group than residents of distressed communities: Hypothetically, a wealthy investor with a child caught with a single joint would be eligible for a social equity license, without any connection to a distressed neighborhood.

“The amendment approved by the Connecticut state Senate to the adult-use cannabis bill this afternoon, simply put, does not meet the goals laid out during negotiations when it comes to equity and ensuring the wrongs of the past are righted,” said Paul Mounds, the governor’s chief of staff.

Even before Mounds’ public statement, the Senate halted debate to hastily draft a new amendment tightening the criteria for a social equity applicant by requiring a connection to a distressed area. But it still left open a path to a license from a wealthy investor with no connection to a census tract affected by drug policing.

Whether the language faulted by Mounds was the product of intent or sloppy drafting was not immediately clear with regard to the initial amendment, but the refusal to make the specific change sought by the governor in the second amendment left no question: It was deliberate.

Unanswered was the question: Why?

Sen. Gary Winfield, D-New Haven, the key sponsor of the bill in the Senate, was left in the awkward position of defending language that came from other advocates of the legalization, jeopardizing the marijuana bill on what was to be the final leg of a tortuous journey. 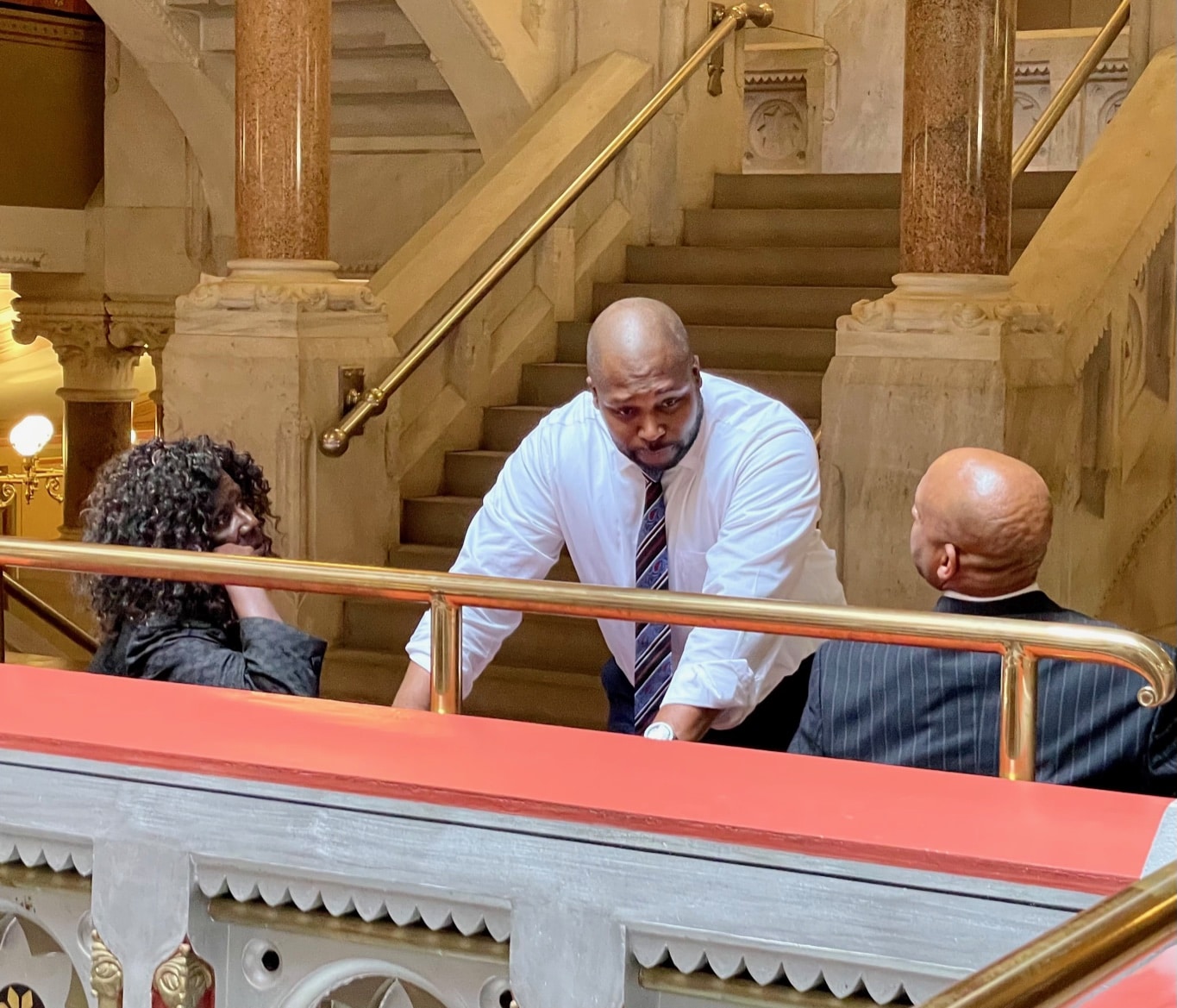 Winfield was caught between the governor and House members who insisted on licensing preference to persons with a criminal record, regardless of their geography. Winfield did not defend the language faulted by the governor, other than saying it was phrased to keep together the coalition for passage.

Notably, Winfield did not criticize the governor’s threatened veto of a bill the senator had ushered to the brink of passage. He did not dispute the characterization that, as passed by the Senate, the bill could give licensing preference to applicants with no credible claim on social equity.

Rep. Robyn Porter, D-New Haven, who had been advocating for giving preference to people with a criminal record, could not be reached for comment. Winfield said she was a party to the conversations that produced the language now threatened with a veto.

Mounds was scathing in his assessment, saying the new version did nothing to right the wrongs of the past.

“To the contrary, this proposal opens the floodgates for tens of thousands of previously ineligible applicants to enter the adult-use cannabis industry,” he said. “This last-minute amendment creates equity in name only by allowing these individuals expedited opportunity to obtain access to the marketplace.”

House Speaker Matt Ritter, D-Hartford, had no immediate comment on what the House would do Wednesday.

“I have to make about 50 phone calls,” said Ritter, who was coaching his son’s baseball team when his phone blew up with text messages.

The House has at least three options: Pass the bill, and hope Lamont reconsiders the veto; strip the offending language from the bill, and send it back to the Senate; or strip the language by inserting a provision in a budget implementer bill also before the House. The last option would avoid the risk of another cannabis vote in the Senate, where passage could be jeopardized by absences, given only 19 members were in support. The implementer bill had passed more comfortably, with 27 votes.

The do-over Tuesday was necessitated by the inability to resolve questions of profit and equity until the final days of the 2021 session, delaying Senate passage on the original measure until nearly 2 a.m. on June 8, the second-to-last day before adjournment.

Debate on the freshened version opened with an unusual bipartisan motion: For the purposes of legislative intent and history, the transcript of last week’s debate will be part of the record on the new version, Senate Bill 1201.

“I won’t retread all of that again,” Sen. John Kissel, R-Enfield, said of the strenuous opposition he articulated last week. “I’m happy it’s all incorporated herein.”

Retail sale of marijuana is not expected until May 2022. Homegrown marijuana would be allowed for holders of medical marijuana cards on Oct. 1, 2022 and to others in July 2023.

The bill would automatically erase some drug convictions and create a petition process to expunge others.

As has been the case all year, lawmakers struggled over the question of who should profit from marijuana. Sen. Dan Champagne, R-Vernon, a retired police officer, quickly questioned the new definition of social equity.

“My first question is, basically, are we taking people that have been arrested for drug dealing and giving them a higher, a better chance of getting these licenses that are made available through this bill?” Champagne asked.

Winfield told Champagne the intention was to underline that people with marijuana arrests or convictions were among the disproportionately impacted.

Hours later, Champagne was the least of Winfield’s concerns.