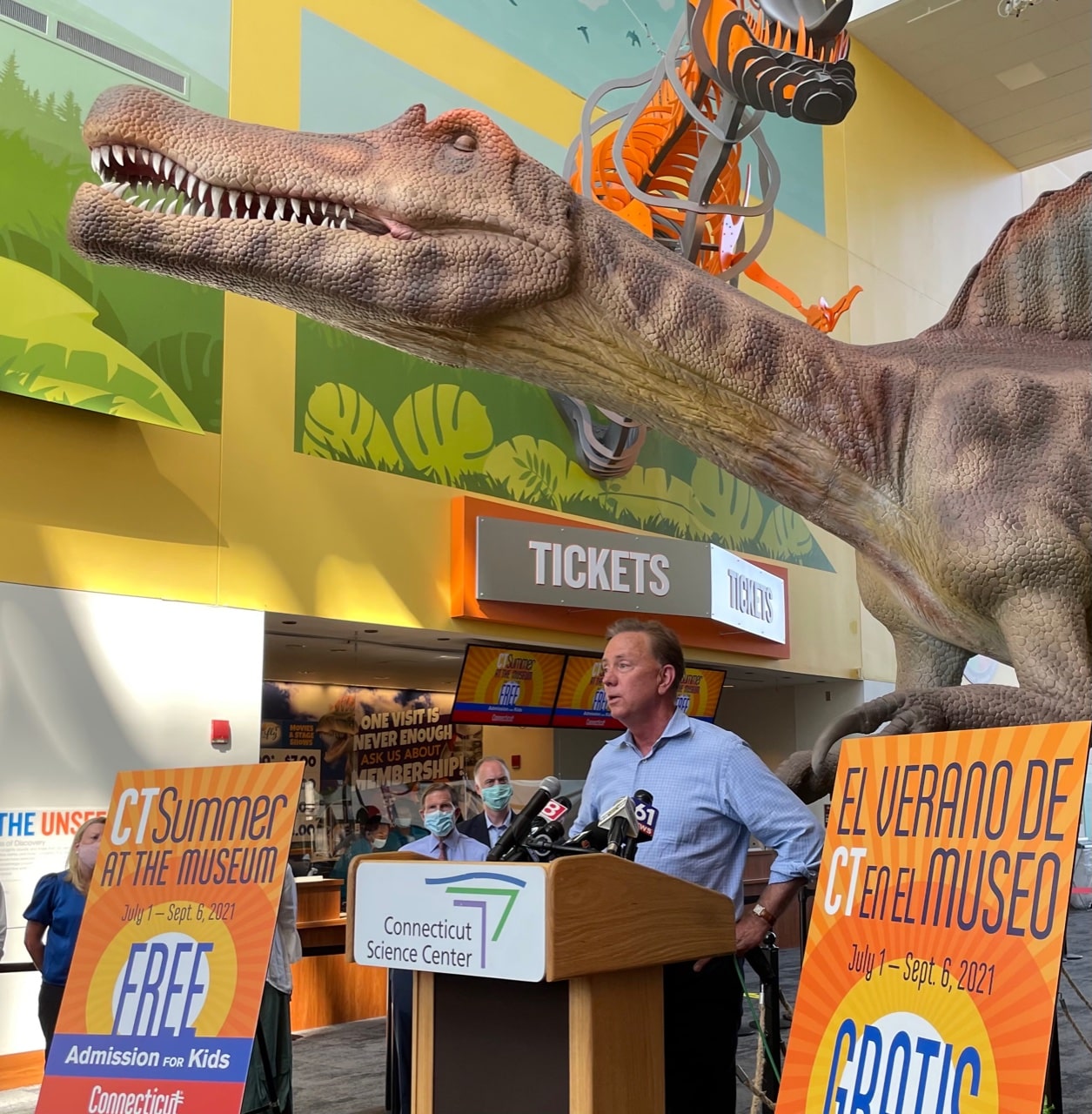 Gov. Ned Lamont spoke at the Connecticut Science Center to promote free museum admissions for kids, then outlined his new eviction order to reporters. He departed Wednesday night for a brief family vacation.

Gov. Ned Lamont acted Wednesday to simultaneously allow the state moratorium on evictions to lapse and apply new pressure on landlords to tap into the more than $400 million in COVID-19 pandemic relief available to cover unpaid rent in Connecticut.

While allowing landlords to resume eviction proceedings, the governor also is extending an appeal period for tenants from three to 30 days — and requiring landlords to file applications for the federal relief available through UniteCT before evicting people for non-payment of rent. 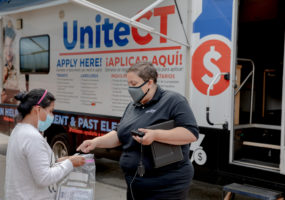 As end of COVID eviction moratorium nears, rental relief going slowly in CT Senate votes to provide attorneys for tenants facing eviction An eviction tsunami is on the horizon, and with it comes more COVID cases

“We’re saying as a condition of any potential eviction proceedings, we want you to go and talk to Unite,” Lamont said Wednesday afternoon. “We’ve got the resources. We can help put together a deal, help people stay in their homes, and make sure that landlords get paid, which they need in order to pay their bills.”

The new rules for evictions were outlined in an executive order Lamont signed Wednesday night before a planned departure with his family for a three-day trip to his summer home in Maine.

Earlier this week, the governor said he expects to seek a limited continuation of his emergency powers before they expire on July 20, even as infections remain low and one of his strongest consumer protections — the evictions moratorium — is expiring.

“We’re getting back to a new normal. People are able to get back to work. So that said, we’re going to be ending the eviction moratorium on July 1 like we anticipated some months ago,” Lamont said

But that new normal brings the risk of the courts in Connecticut and across the U.S. being overwhelmed by eviction proceedings. According to federal estimates, 6 million renters in the U.S. are behind on rent, and 40% of them expect to be evicted this summer.

By forcing landlords to file applications to UniteCT, the relief program started in March by the state Department of Housing to administer the federal funds, Lamont is heeding a call the Biden administration made to state court systems.

Anita Gupta, the associate attorney general, recently urged judges to take two of the steps embraced by Lamont: Require landlords to apply for the rental assistance before beginning eviction proceedings, and stay eviction orders for at least 30 days.

The letter essentially is a plea to buy time for the relief program to work and an acknowledgement that giving away billions to landlords and tenants is more time-consuming than anticipated.

“Simply providing additional time to forestall evictions will make a critical difference,” Gupta wrote. “Congress has appropriated approximately $46.5 billion in emergency rental assistance, which is being distributed to states, counties, cities, and tribes to keep families in their homes.”

Advocates for landlords and tenants have complained that UniteCT is cumbersome, requires access to the internet and, at least initially, offered landlords too little money in return for a promise not to evict for non-payment.

State officials counter that the cap on grants increased from $10,000 to $15,000 as federal aid increased, and that the pace of awards is accelerating. By Wednesday night, UniteCT had distributed $23.16 million, resolving 3,081 cases of non-payment.

Lamont’s new order reflects a quirk in the program: Both a landlord and tenant must file an application, meaning a refusal by one party to participate leaves the other unable to obtain a share of the relief.

Erin Kemple, the executive director of the Connecticut Fair Housing Center, said a 30-day stay in eviction orders would be valuable, allowing time for tenants to negotiate repayment terms with landlords  or seek new housing.

“That is helpful if it is universal,” she said. But the 30-day stay applied only to evictions over non-payment of rent, not other issues.

Kemple said she hopes no eviction orders will be executed on an applicant to UniteCT until they are deemed eligible or ineligible.

“That would be a significant step forward for tenants,” she said.