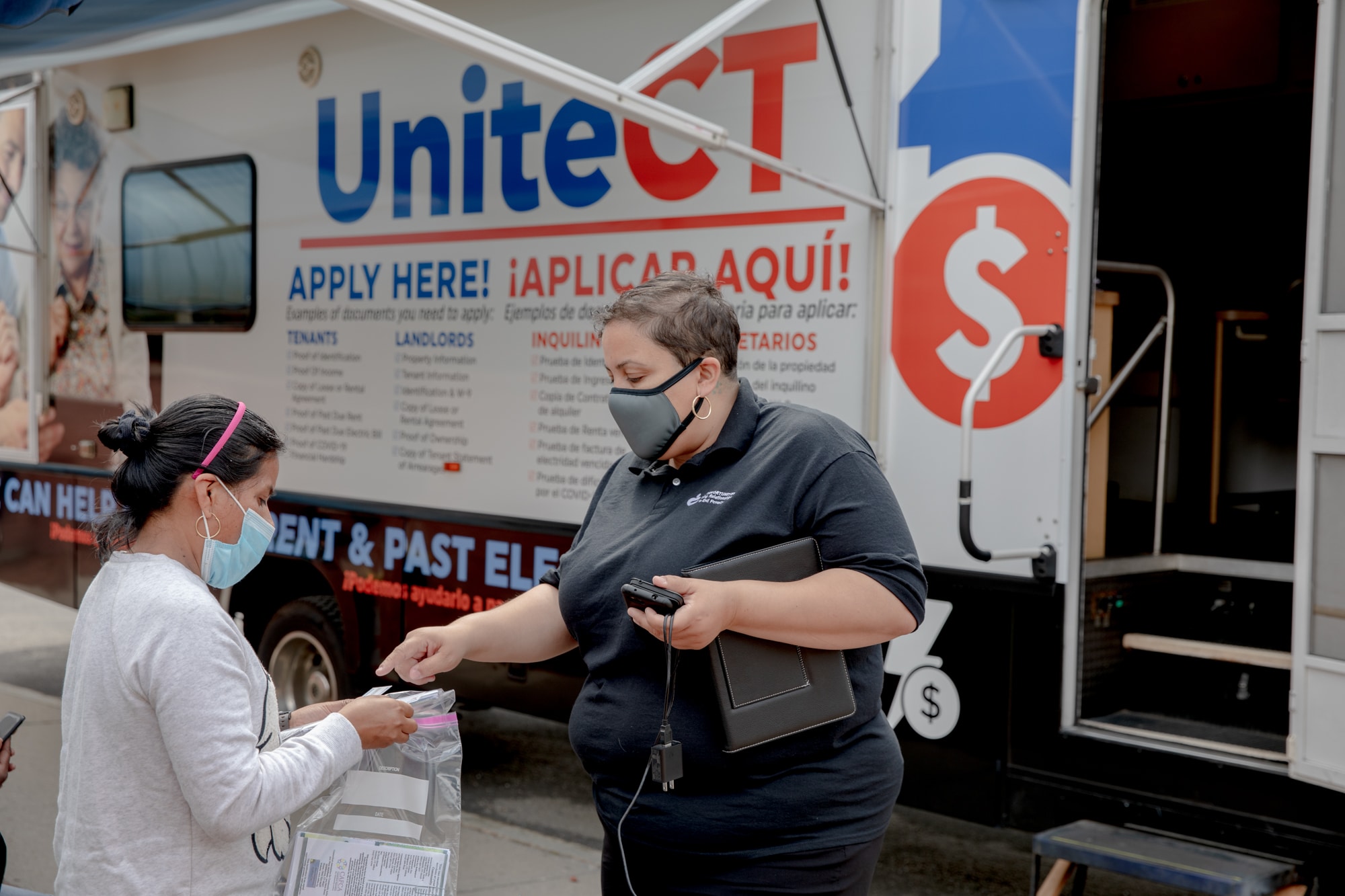 Denise Martinez, right, community outreach coordinator at New Opportunities, explains the UniteCT program to a landlord who didn’t want to be named. The rental assistance program requires application from both tenants and landlords.

The state Senate approved a bill Tuesday that would provide attorneys to low-income tenants facing evictions.

The vote anticipates a wave of evictions that could come as pandemic-inspired state and federal moratoriums are lifted, and as federal funding — provided to the state to help clear the backlog of rent that went unpaid during the pandemic — awaits distribution.

“A good attorney — especially a legal aid attorney — who deals with this all day long can bring resources to that tenant in terms of finances, counseling, various other problems that tenant may be facing that are contributing factors towards the eviction or non payment,” Sen. Rick Lopes, a Democrat from New Britain and the co-chair of the Housing Committee, said on the senate floor Tuesday. “There are things now being put in place to help landlords who have lost rent during that time, and they are a work in progress, but they are moving in the right direction.” 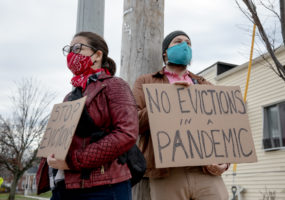 Few tenants facing eviction have an attorney. Top lawmakers are poised to change that. An eviction tsunami is on the horizon, and with it comes more COVID cases

Over $400 million in federal funding has been provided to the state to specifically help alleviate the backlog of tenants behind on rent. As of Monday, $4.9 million had been paid to 787 landlords, and over 7,000 are awaiting review. Just one applicant has been denied help.

Faced with concerns about the rollout from housing advocates and some legislators, the Department of Housing is in the process of overhauling the program, known as UniteCT.

The legislation to provide counsel was approved largely along party lines, with Sen. Joan Hartley, D-Waterbury, joining every Republican senator to vote against the bill.

“I do understand that it’s trying to balance the scales of justice to help tenants that are having issues with landlords and are fighting eviction, but there are already processes in place where the judge has the ability to extend for 30 or 90 days [evictions]. This really does the opposite of balancing the scales of justice. The state is literally going to pick a side and help,” said Sen. Paul Cicarella, the minority Republican leader on the Housing Committee. “This will negatively impact these small landlords.”

State data provided by the CT Fair Housing Center show that for the thousands of tenants facing eviction each year, most have been left to navigate the housing court labyrinth alone, where a mistake in filing paperwork can result in homelessness.

In February, of the 180 cases where a judge approved an eviction request, 158 of the landlords had an attorney, compared to 10 of the tenants. Only 7% of those facing eviction last fiscal year had an attorney.

The bill was approved in the House earlier this month, but because of some technical changes that were approved in the Senate, it must head back to the House for approval again before heading to the governor for his likely signature.

State Rep. Brandon McGee, the House chairman of the Housing Committee, said during an interview Tuesday that he expects swift approval in his chamber.

If passed again in the House and signed into law by Gov. Ned Lamont, Connecticut will become one of the first states to provide those facing eviction with the right to counsel. Washington adopted the change earlier this year, and a similar bill awaits the governor’s signature in Maryland.

Funding for the first two years of the program is anticipated to come from a sliver of the pandemic relief funds Connecticut received from the federal government. Lamont has recommended the legislature dedicate $20 million to pay for legal representation for 12,000 people facing eviction over the next two years.

The legislation making its way through the chambers paves the way for the right to counsel to remain in place even after the federal money dries up — provided lawmakers can find the resources.

Before the pandemic hit, nearly 20,000 people in the state faced evictions each year. Eviction rates in four Connecticut cities were among the highest in the nation in 2016, the most recent year analyzed by Princeton University’s Eviction Lab. Waterbury ranked 22nd among the nation’s large cities, with six out of every 100 renters being evicted. Hartford ranked 29th, Bridgeport 39th and New Haven 69th. This does not include “informal evictions,” such as when a landlord asks a tenant to move.

Lower-income workers continue to suffer disproportionately from the economic fallout that accompanied the pandemic. Those being impacted the most by evictions are Black and Hispanic residents who are twice as likely to rent as white people — the same population that’s more likely to contract and die from the virus.

Renters’ income is typically less than half of homeowners’.

It is unclear just how many people will face eviction in Connecticut after the moratoriums end, but the U.S. Census Bureau estimated in mid-April that more than 30,000 people in the state will likely leave their homes in the next two months because they’re facing eviction.

The bill approved Tuesday would prioritize providing attorneys for those who make less than 80% of the state’s median household income, which is $80,000 for a family of four. If demand for the program is stronger than funds are available, the bill also allows priority to be given to those facing eviction in certain ZIP codes, to those who are non-native English speakers, or those who have a disability.