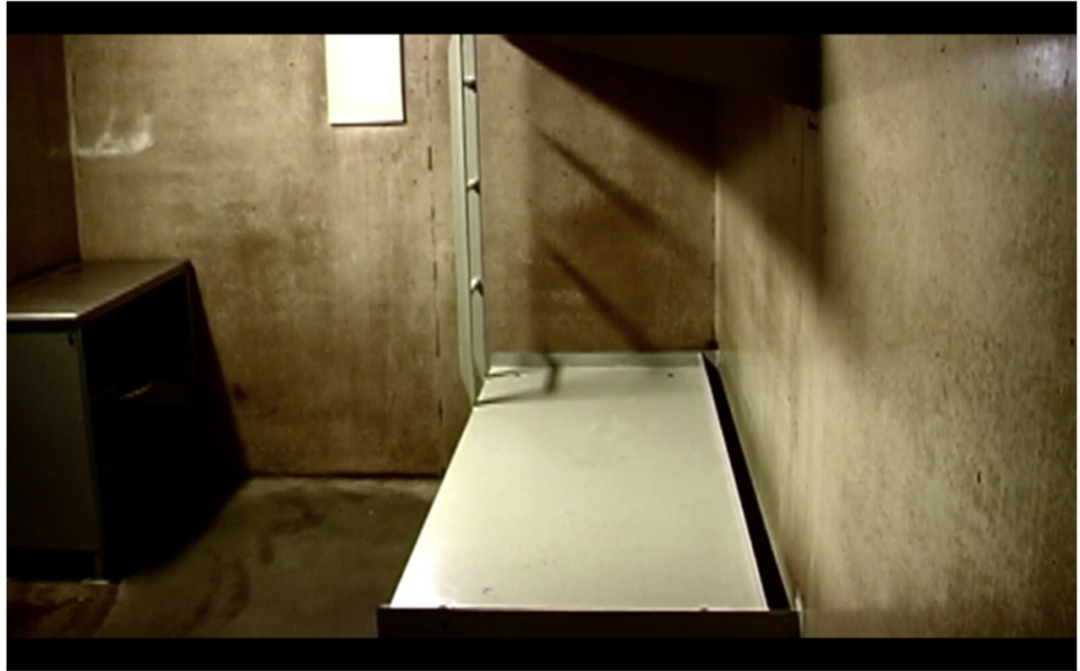 As the state transferred men out of Northern Correctional Institution this spring in preparation for the supermax prison’s closure, Richard Rice, a 52-year-old man incarcerated at a nearby facility, noticed some changes at the B Unit, where he has a job cleaning the hallways and empty cells. 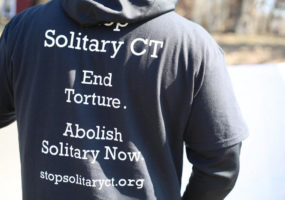 Lamont vetoes limits on solitary confinement, counters with executive order Criminal justice reform in the 2021 legislative session: Here are the bills that passed and those that didn’t Writing from their prison cells, the incarcerated submit testimony about their time in solitary confinement

The cell modifications at MacDougall-Walker Correctional Institution, where Rice is currently serving time on an assault conviction, reminded him of the ones at Northern, where he was locked up, off and on, for more than nine years, beginning in 1998. He’s been transferred back and forth to the prison during a slew of sentences he’s served since 1985.

Rice said several cells at MacDougall-Walker have special beds in them now to hold people in four-point restraints, and a few metal doors have been changed so prisoners can’t throw their feces or urine out of the slot.

“Them cells are just strictly for individuals that’s really out of control. They brought it here,” Rice said. “Basically, they’re taking Northern and bringing it here.”

Rice’s transfer files indicate he was in MacDougall-Walker from 1993 to 1996, when he was serving time for another crime. Before Northern opened in 1995, he said, people in administrative segregation — a program intended to curb dangerous behavior so prisoners can be transitioned safely back to the general population — were also housed at MacDougall-Walker, on the same block where he says these recent cell modifications have occurred.

“They started the whole Northern mold here,” Rice said, indicating that he knows the tools the DOC uses to contain unruly prisoners because he has been subjected to that form of confinement himself. “Everything that they got as far as individuals that’s been in trouble, I’ve been through it.” 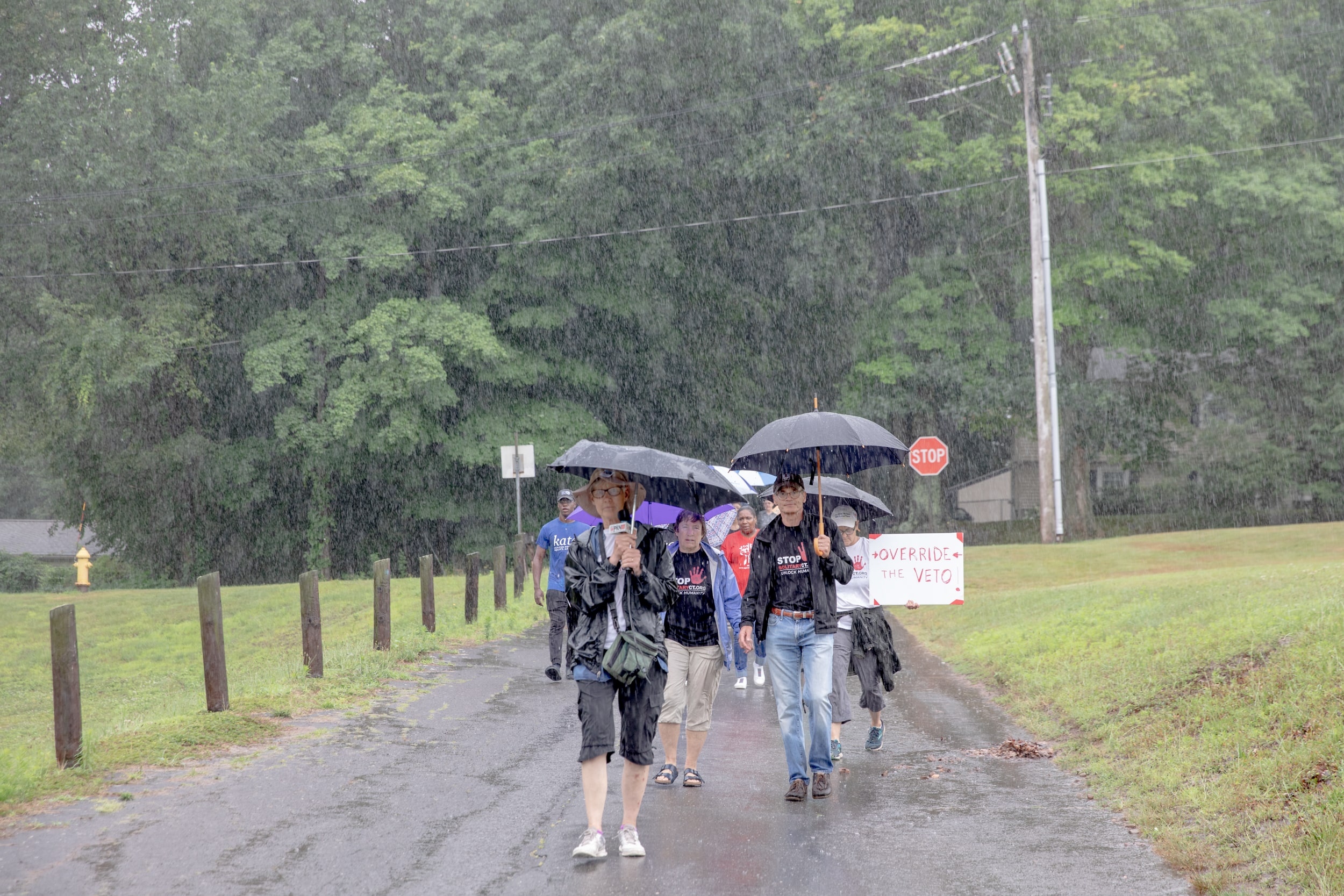 Two days after Gov. Ned Lamont vetoed a bill that would have set statutory limits on the use of solitary confinement in Connecticut prisons, protestors gathered in front of the Cheshire Correctional Institution to ask lawmakers to override his veto.

At first, corrections officials seemed like they were listening, advocates said, because they were making gestures of goodwill, like allowing people locked up at Cheshire Correctional Institution out of their cells for an extra hour each day.

“Then I started getting letters from men saying nothing’s really changed since they came from Northern,” said Barbara Fair, a member of Stop Solitary CT who has long advocated to end solitary confinement. “Unless they’re talking about changing the culture of the prison, nothing really was going to change.”

DOC Commissioner Angel Quiros acknowledged in a recent interview that prison staff have used in-cell shackling at MacDougall-Walker after men were transferred there from Northern, where they’d been completing administrative segregation or security risk group programming.

“We’ve had incidents at the Walker building during the transition, where individuals have caused problems where they had to be placed in in-cell restraints,” Quiros said. “And then once the threat was over, they were removed.”

The people in these programs are a challenging group for DOC staff to manage, said Karen Martucci, the agency’s director of external affairs. 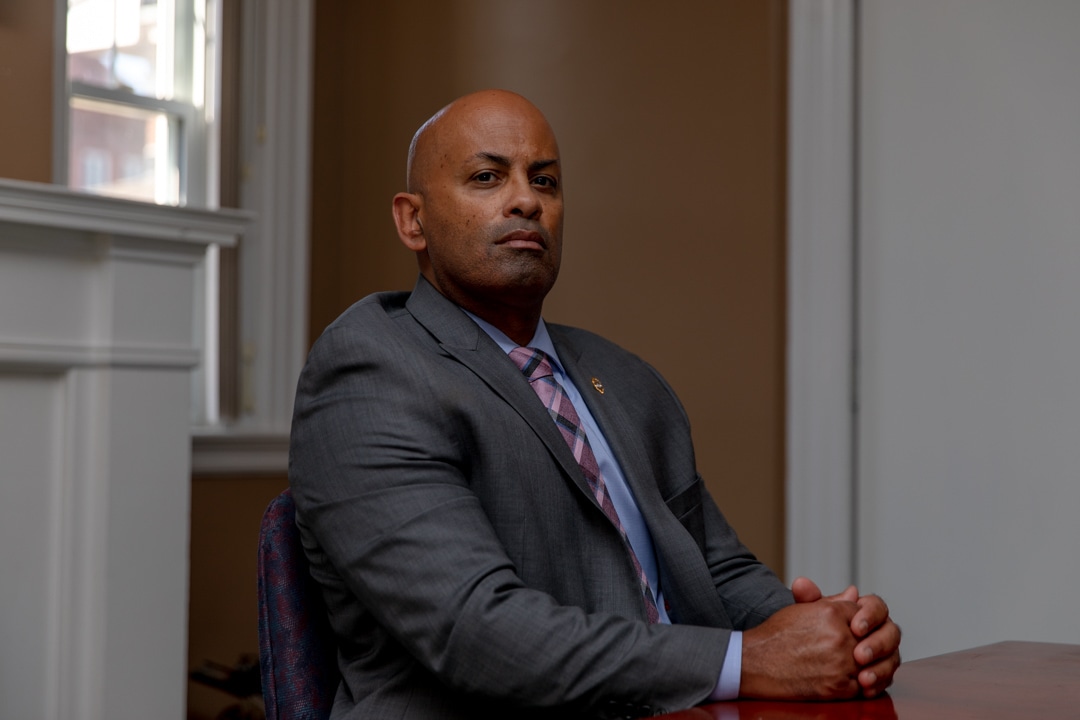 DOC Commissioner Angel Quiros poses for a portrait on Wednesday, Sept. 23 at Cheshire Correctional Institution. Quiros says his department will restrict the amount of time a prisoner can be placed under  in-cell shackling.

There are a range of reasons the DOC places someone in administrative segregation. According to the department’s administrative directives, people are placed in the program if their behavior poses a threat to the prison’s safety or the safety of staff or other prisoners.

And with the change of environment comes a testing of the waters, Martucci said, as the men figure out what they can and can’t get away with.

Quiros said he is confident MacDougall-Walker is the right location for those who had been completing phase one of the administrative segregation and security risk group programming at Northern, among the most intense forms of isolation, in which prisoners’ movement is heavily restricted when they’re out of their cells. As they reach later phases of the programs, they are gradually given more freedom when they’re not locked up, although advocates dispute whether the incarcerated actually spend less time in their cells when they’re in later phases of the program.

“We might have some incidents at the beginning, but they’ll be fine,” Quiros said.

“You have staff that have never dealt with this particular population, so they’re learning as well. And they’re a challenging population,” Martucci added. “So we did anticipate some issues. We had some issues. And, as the commissioner said, those things will stabilize.”

In the past, phase one of the administrative segregation program has been housed at Osborn, MacDougall-Walker, Cheshire, Gardner and Corrigan correctional institutions, Quiros said. “And I can tell you that the transitioning probably got rocky at the beginning. But I can tell you, too, that we effectively managed that population, too, in those other facilities.”

Quiros said in-cell shackling is a tool of immediacy that can be used at any of the three county jails — located in Hartford, Bridgeport and New Haven — or at Corrigan, Gardner, Cheshire, MacDougall-Walker, Osborn and York Correctional institutions. It was not just a practice used at Northern, nor is it only used on those held in administrative segregation or in a security risk group, people the DOC has determined to be affiliated with a gang and pose a threat to the safety of staff, the incarcerated or the correctional facility. It is a way for the department to handle emergency situations and keep the prisoners and corrections staff safe, Quiros said.

“In-cell restraints is a temporary tool after an immediate significant incident,” Martucci said.

Imagine, Martucci said, that a prisoner is banging his head against a wall and cutting himself. Verbal intervention hasn’t worked, and the prisoner is still an imminent threat to himself.

“That may be a scenario where we have to temporarily utilize in-cell restraint status,” said Martucci.

Those who have been subjected to in-cell confinement, many of whom are forced to eat off the floor and are unable to use the bathroom because they are tethered by chains, say that it is not just those who pose an imminent threat who are placed in the restraints, however. 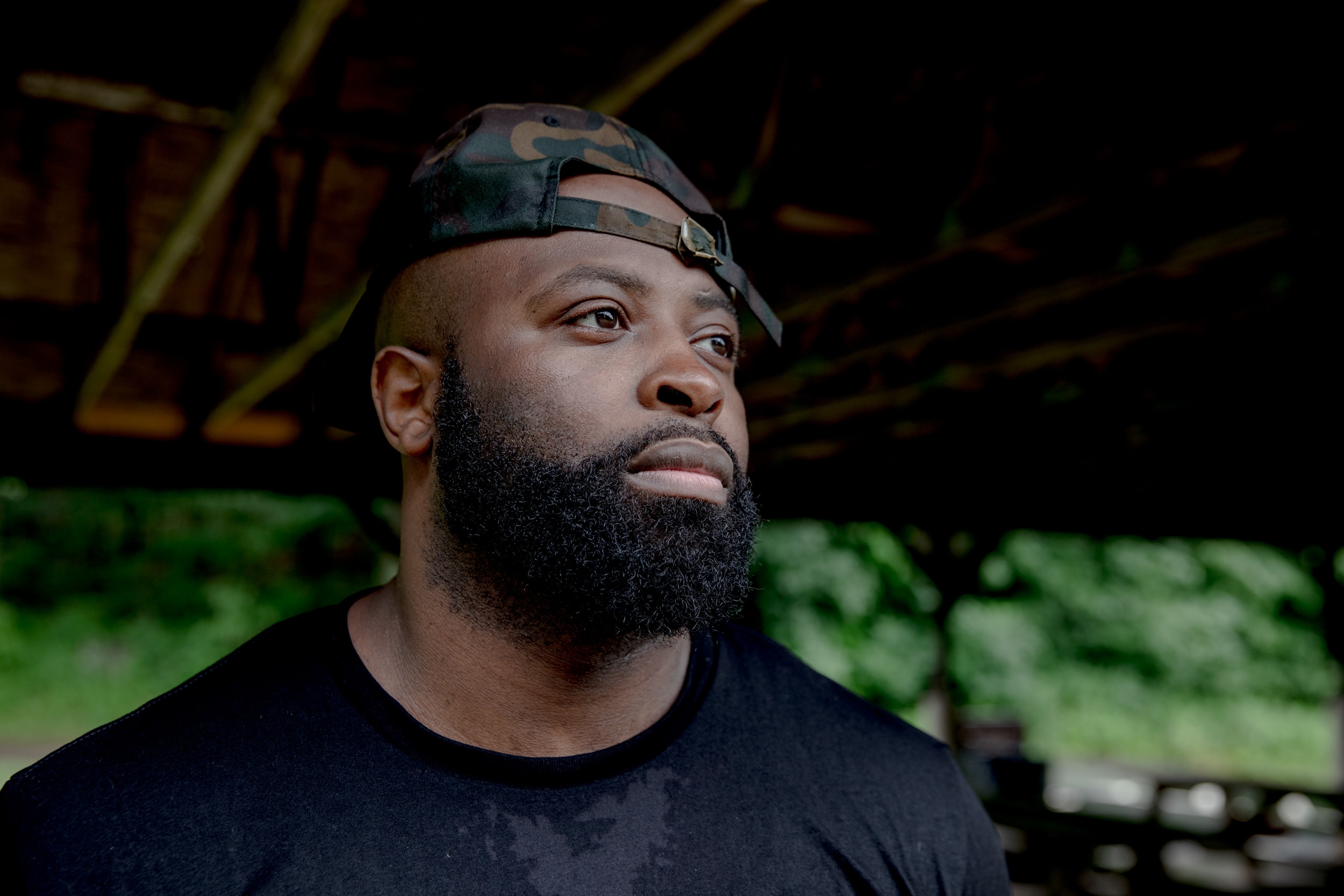 Leighton Johnson said he was chained up for three days, including when eating and using the toilet, at the Northern Correctional Institution before it was closed. “Human beings need to interact with each other,” Johnson said. “You already stripped them of their freedom, society, their family and the will to do whatever they want. Then on top of that, you stripped them from social interactions, or you minimize it to an hour a day of walking around in a cage like an animal. How is that making society better?”

Leighton Johnson, a member of Stop Solitary CT, said he was placed in in-cell restraints once after seeking medical treatment for chest pains. He was stripped naked before seeing  medical staff, then told he was fine. He asked the nurse how he could lower his blood pressure, but they were short with him, telling him to leave.

“They said I didn’t move fast enough,” Johnson said of corrections staff. “They dragged me back to the cell, and they threw me in in-cell. I was in no way a threat, I just wanted some medical treatment.”

“That is an area that I’m looking to review, and to significantly reduce the use of in-cell restraints,” Quiros said. “If the behavior persists, it can be up to three days. And that will change. That’s going to change. I can tell right now that’ll be one of the recommendations that I will make.”

Quiros is now on the clock to reduce that form of confinement. By Oct. 1, the department must report on the steps it has taken, and those it must still make, to decrease the use of in-cell restraints. By that date, Quiros must also change the department’s policies to limit the use of isolated confinement of members of “vulnerable populations to the greatest extent possible.” That includes people with serious mental health conditions, incarcerated pregnant women, and those under 18 or 65 or older.

The mandate comes from an executive order issued by Gov. Ned Lamont on the same day he vetoed a bill that would have sharply reduced the use of solitary confinement. Lamont’s order gives a series of deadlines over the next several months intended to expand the amount of time prisoners spend outside their cells, even those in restrictive housing units.

Quiros said the governor’s directive is a “huge shift” for the DOC, one that pushes the department “in the right direction where we want to be when it comes to criminal justice reform and ending solitary confinement.”

He said he is continually reviewing incidents of isolated confinement, monitoring how in-cell restraints are used and the length of time people are held in them.  He said he will make “significant changes” to administrative segregation and security risk group programs. 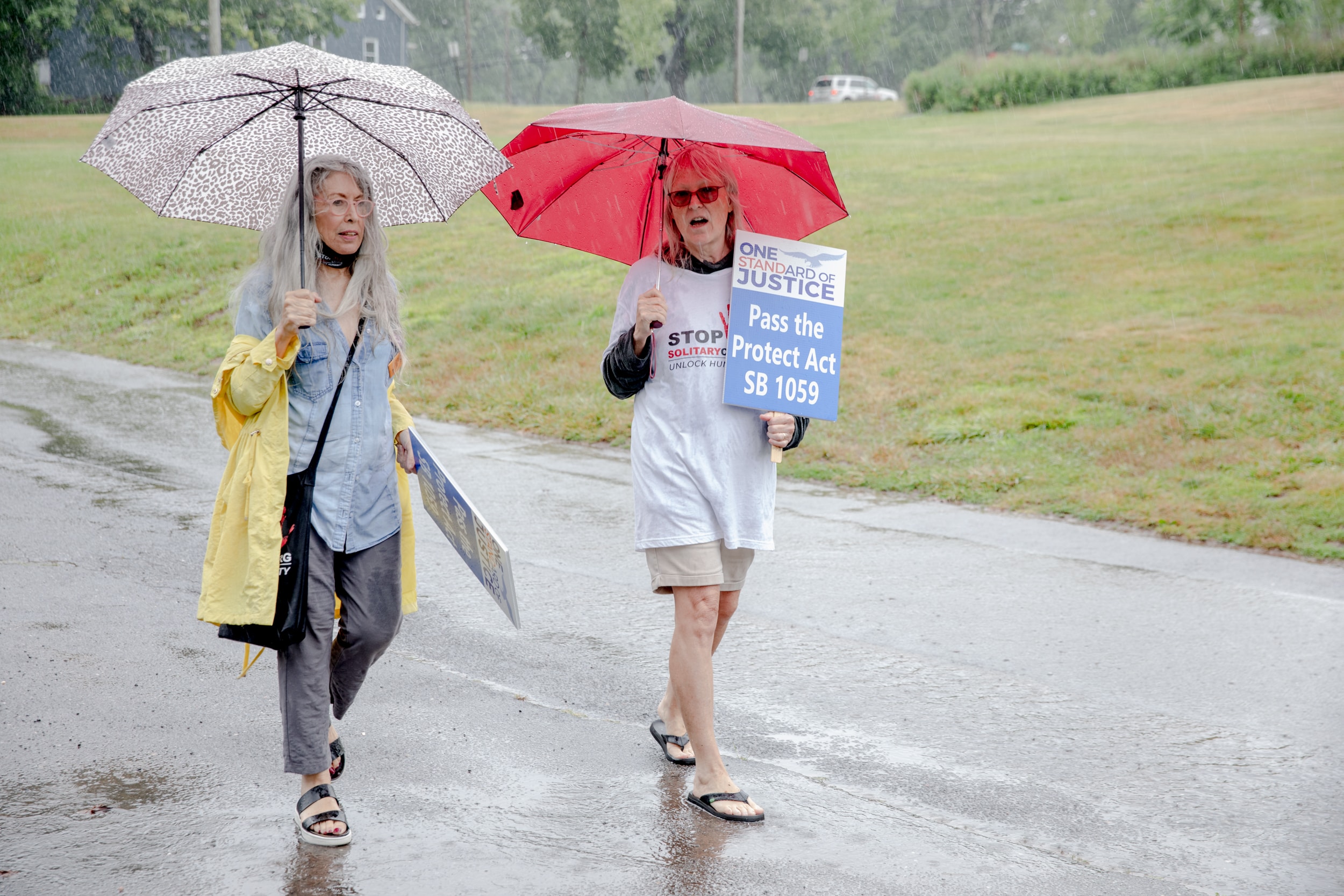 Cindy Prizio, of Wilton, left, and Sharon Dorne, of Southbury, who are members of Stop Solitary CT, walk in the rain along with other protestors near the Cheshire Correctional Institution.

One of the reasons advocates are disappointed Lamont vetoed the solitary confinement bill is because it cut through all the different names and statuses they said the DOC uses to employ this type of confinement — administrative segregation, security risk group, in-cell placement — and instead focused on the isolation imposed by all the different forms.

The DOC said that imprecision was part of what would have made the bill hard to implement. Martucci said the measure did not explicitly mention in-cell restraints; rather, it makes broader references to “physical,” “pharmacological” and “life-threatening” restraints.

“Language matters, right? This is a law,” Martucci said. “If we were able to kind of negotiate that language and massage it a bit, we may have been able to get to a better place with that language, but it did not specify in-cell restraints. And again, in our world, that’s a very specific tool and a very specific scenario, so when you kind of broaden that, it makes operations difficult.”

No matter which form of isolated confinement he was placed under, Johnson said, it all seemed the same: He was locked in a cell, alone, for extraordinarily long periods.

“In in-cell, in AS, in SRG, everything, I felt the same way, I was treated the same way, experienced the same feeling of being locked in a cell most of the day,” Johnson said. “Different names, the same treatment.”