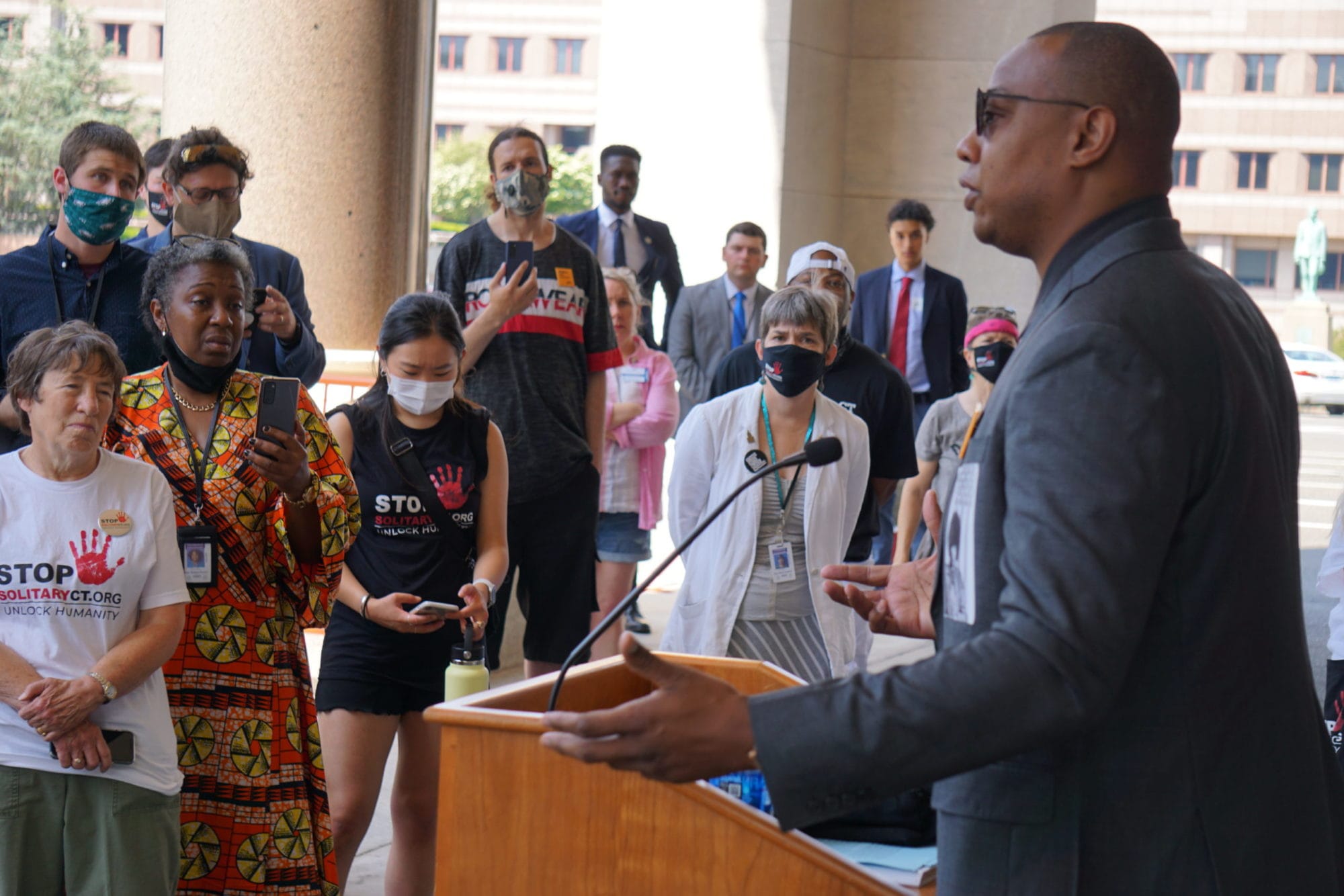 Rep. Robyn Porter, in a print dress, listened as Caron Butler, former UConn star and NBA player, spoke at a PROTECT Act rally outside the Capitol earlier this month about the time he spent in solitary confinement as a kid.

Gov. Ned Lamont vetoed a bill Wednesday that would have set statutory limits on the use of solitary confinement in Connecticut prisons, instead issuing an executive order limiting the practice.

The veto of the so-called PROTECT Act, the first of 2021 and only his fourth since taking office in 2019, puts him at odds with criminal justice reformers who had been lobbying the governor and lawmakers with a near-daily vigil outside a state Capitol closed to the public during the COVID-19 pandemic.

“The bill was just not good for public safety,” said Max Reiss, Lamont’s spokesman, arguing that the governor’s directive still makes Connecticut a leader in limiting isolated confinement. “What we signed with the executive order, without a doubt, is an unbelievably progressive approach to isolated confinement, which is a vast improvement to where Connecticut was at the start of the legislative session, or even a week ago.”

Lamont’s executive order appeared aimed at softening the political blow of the veto without yielding executive authority — in this case the ability of the Department of Correction to use a tool to manage its 14 prisons and jails — but it offered little comfort to advocates like Barbara Fair.

Fair, one of the advocates who spent months outside the Capitol imploring lawmakers to pass the bill, and later, urging the governor to sign it, said the time for an executive order was when people in prisons and jails were dying from COVID-19.

The lack of a mandate at the height of the pandemic, coupled with vetoing a bill that would reduce the amount of time people in prison and jail would spend locked in their cells alone, Fair said, indicated an “almost complete indifference” to the incarcerated population, which as of June 1, was 44% Black.

“It’s not about this one incident, its a continuing incident of just ignoring the voices of people who are suffering the most in this state,” Fair said. “It’s demoralizing, as a person of color, because it continues to ignore our humanity.”

By Dec. 1, the order states, “no person shall be held in prolonged solitary confinement.”

It also mandates the DOC increase out of cell time for all people in correctional facilities, including those held on restrictive statuses. By Oct. 1, the DOC will make policy changes to limit the solitary confinement of members of vulnerable populations — including those under age 18 or older than 65, those who have high mental health scores, those who have developmental disabilities or who are pregnant — “to the greatest extent possible.”

Sen. Gary Winfield, co-chair of the Judiciary Committee and a New Haven Democrat, said the problem with executive orders is that each one has a “very short shelf life.” If Lamont doesn’t run for reelection, or loses, the order could be rolled back by his successor.

The bill passed by the legislature wouldn’t have gone into effect until July 2022, giving the DOC an entire legislative session to come back and iron out provisions of the bill they disagreed with. And the DOC would have until 2023 before they needed to give incarcerated people on restrictive housing status — a form of confinement prisoners can be held on because of behavioral issues — six-and-a-half hours of out-of-cell time each day.

In his veto message, Lamont said, “I fully support the purpose of this legislation, to make certain that isolated confinement is not used in any correctional facility in Connecticut.”

He also said he declined to sign the bill because “it puts the safety of incarcerated persons and correction employees at substantial risk.”

Lamont wrote that the bill puts “unreasonable and dangerous limits on the use of restraints.” He said it only permits certain corrections officers to order the use of handcuffs, and only allows therapists to order restraints during a psychiatric emergency.

The governor pointed out that captains are not always supervising the prisons and jails, and may not be on duty over weekends. 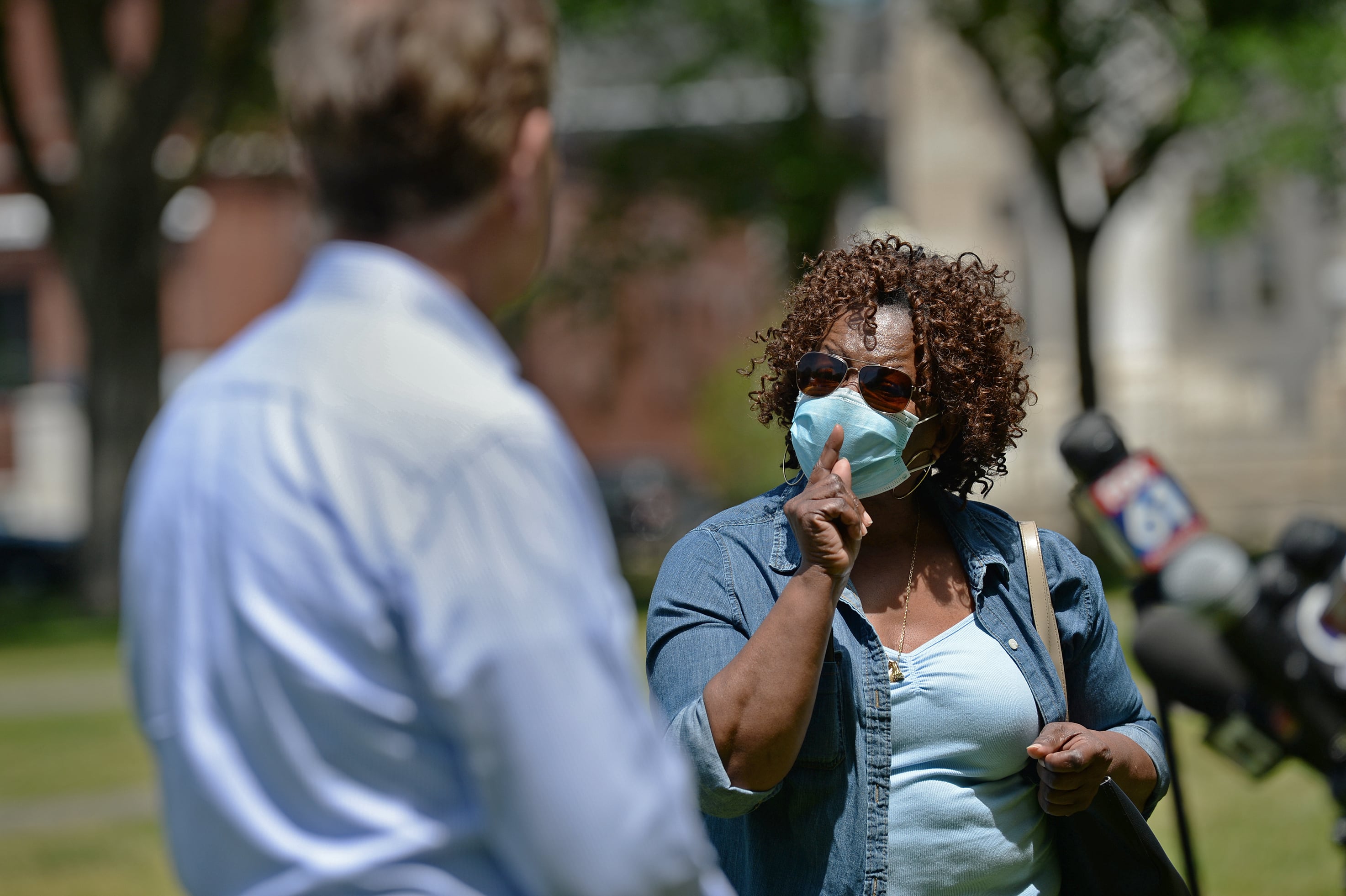 Barbara Fair, of West Haven, asks Gov. Ned Lamont to explain the lack of testing in the state’s prisons after a seventh incarcerated person reportedly died of COVID-19. Lamont held a press conference on the New Haven Green Wednesday where a walk-up COVID-19 testing site was set up for the day. Fair is with the prison activist group Stop Solitary CT to end the practice of solitary confinement.

Lamont also said the bill jeopardizes safety by denying the DOC flexibility to limit visitors to correctional facilities. Under the PROTECT Act, Lamont said, the DOC couldn’t deny a contact visit solely based on the visitor’s criminal history, meaning people convicted of smuggling drugs into prisons could be allowed into a correctional facility for a 60-minute contact visit with a prisoner, visitations that could present a heightened risk for the transfer of contraband, including weapons and drugs, into prisons and jails.

“The Department must have the ability to set reasonable visitation policies that promote family and community connections, while limiting safety and security risks,” Lamont wrote.

Also of concern were the provisions of the bill dealing with the ombudsman program, which would have acted as a watchdog in an attempt to ensure transparency and accountability.

Lamont noted that the legislation gave the watchdog access to DOC records, with certain exceptions, and said he was worried this could lead to security breaches at correctional facilities; he also said the bill raises questions about whether the ombudsperson could access, and then disclose, records protected by attorney-client and work product privileges.

Winfield said the bill carved out exceptions for the use of solitary, such as in cases of a facility lockdown or imminent physical harm to others. He also said the bill was amended so that the highest-ranking officer on duty could order an incarcerated person be handcuffed, meaning if a captain was not on duty, other corrections staff could make the call.