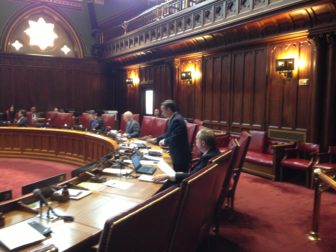 The Connecticut Senate Tuesday unanimously passed consumer protections for electric customers that advocacy groups say are inadequate and should be strengthened once the bill comes before the House of Representatives.

Legislators celebrated bipartisan passage of a bill that addresses a major source of constituent complaints, especially from the elderly: aggressive marketing by electric suppliers, some of whom entice customers with low teaser rates that jump with little warning.

“Maybe not everything that every advocacy group wants is in this bill, but this bill moves us forward in a giant way,” said Senate President Pro Tem Donald E. Williams Jr., D-Brooklyn, who stood with AARP in January to pledge passage of the law.

But AARP, the Connecticut Citizen Action Group, ConnPIRG and the Legal Assistance Resource Center say the bill was too deferential to the interests of electric retailers in that it failed to cap variable rates. They were lobbying House members to make changes.

Even Sen. Michael McLachlan, R-Danbury, a conservative who by his own admission typically finds new business regulation repugnant, said the bill was a good first step, but it could have been stronger. He preferred seeing stiffer fines for violations.

“As legislators, our phones ring off the hook,” McLachlan said.

He described taking on a constituent’s complaint, calling an electric supplier seven times without reaching anyone who could resolve the issue. If nothing else, McLachlan said, the bill should be seen as expression of rebuke to the electric suppliers by the legislature.

“Hopefully, they’ve got the message,” he said.

The legislation is an attempt to impose order on the deregulated energy market that gives consumers a choice between accepting the standard offer of Connecticut Light & Power or United Illuminating, the two major electric transmission utilities, or to do business with one of the dozens of retail suppliers.

The bill directs the Public Utilities Regulatory Authority to impose a new billing format by July 1, 2015, that will clearly disclose the retailer’s rate compared with the standard offer, the length of contract, cancellation fees and any change to the rate due to take place in the next billing cycle.

It gives consumers the power to cancel a contract with a retail supplier and return to the standard offer within 72 hours.

John Erlingheuser, the director of advocacy for AARP, said the bill has some good notice requirements, but it falls short on protecting consumers against variable rates. He said nothing bars a retailer from placing a customer on a variable rate plan, once their contract expires.

“I think it’s going to be important that suppliers are not able to put you on a variable rate when your contract expires,” Erlingheuser said. “Now, the suppliers are going to say they have to give 45 days’ notice. But that doesn’t help an elderly person who might be in the hospital when that bill comes.”

Tom Swan, the executive director of CCAG, said he expects the House will be more receptive than the Senate to the advocates’ concerns.

“I am optimistic that the members of the House will make sure it ends up a good bill,” he said.

Sen. Bob Duff, D-Norwalk, the co-chairman of the Energy and Technology Committee, said the bill was negotiated to reflect the concerns and interests of a range of officials, including the governor, attorney general and legislative leaders.

“It’s a delicate balance,” he said. “Eighty percent of what some groups wanted, they got. They just didn’t get 100 percent.”

Rep. Lonnie Reed, D-Branford, the committee’s House co-chair, said the governor’s office was among those who opposed imposing a cap on rates. She doubts that the bill will be amended.