The budget vote is Saturday, but Malloy’s focus is November 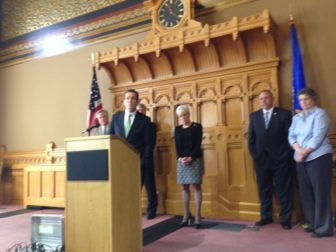 Gov. Dannel P. Malloy shook off a demoralizing week of political and fiscal stumbles Friday, defending his stewardship of the state’s economy and budget with a focused confidence, even as he minimized fiscal challenges that await the winner of the 2014 election.

At a press conference ostensibly called to outline and defend a budget deal closed Thursday night, the first-term Democratic governor instead made the case for his re-election, complete with a bedrock pledge on which his campaign will rest: He will neither seek nor accept any further tax increases.

“I gave at the office,” Malloy said.

It was a sardonic reference to the $1.5 billion tax increase he imposed in his first year in office, part of a painful cure for the $3.6 billion shortfall he inherited upon taking office in January 2011. It also was a pointed message to the broader electorate — and to liberals in his own party agitating for a higher tax rate on the very wealthy.

Been there, done that, gave at the office.

On Monday, the governor was curt, defensive, even shrill at times during a one-hour interview and call-in show on WNPR. Deteriorating revenue projections forced him to renege on a promised tax rebate, and he waited until Thursday to forcefully end an awkward off-again, on-again, off-again dance over keno.

A new Gallup poll found a collective depression in Connecticut: Nearly half the state’s residents confessed to thoughts of wanting to live elsewhere, more than any state other than Illinois. Governors up for re-election frequently bear the brunt of such sentiments.

It was a week spent on the defensive, a dangerous place for a governor elected by a whisker, a politician with an abrasive side who has yet to hit 50 percent in any key polling measure and who is facing gun owners angry over post-Newtown gun restrictions, unionized teachers at war with his education commissioner and public employees still resentful of a negotiated pay freeze.

On Friday, backed by leaders of the Democratic majorities in the General Assembly, Malloy addressed reporters at the Capitol in the formal setting of the Old Judiciary Room. He went on offense without being offensive. He seized on the morning’s unexpectedly upbeat national jobs report as well as the steadier elements of the state’s revenue picture: improving collections on sales and payroll taxes.

He repeated his administration’s explanation for the overall deterioration in revenues – one used in many states – that capital gains taxes fell short in 2013 as investors took their profits in 2012 before tax rates increase. He took care not to label them the Bush-era tax cuts, a reference that his administration made earlier in the week. It opened him to a mocking complaint by House Minority Leader Lawrence F. Cafero Jr., R-Norwalk, that Malloy was whining, shifting blame to a GOP president long gone from the White House.

Malloy pushed back Friday, referring to the criticism that comes from “the sidelines.” He said he worked to protect the state’s most vulnerable as the state recovered from recession, even extending an earned-income tax credit to the working poor that the GOP would eliminate in its alternative budget.

“So the Republicans’ idea about getting the economy going is to take a $120 million from the neediest folks, that will all be spent in state, and take it out of the economy,” Malloy said. “It’s stupid.”

Malloy contrasted his aggressive economic development department with that of his immediate predecessors. His administration has made loans, grants and other assistance to 1,600 companies in three years, compared with the 116 companies assisted in the previous nine years by GOP predecessors.

He noted that a senior executive at United Technologies Corp, by far the state’s largest private employer, had suggested to Wall Street analysts before the 2010 election that anyplace than Connecticut was a better place to do business.

“Today, they are agreeing to spend $4.5 billion in the state of Connecticut,” Malloy said. This year, Malloy reached a deal with UTC under which the company will build a new headquarters for its jet engine-manufacturer, Pratt & Whitney Aircraft, and a new research center. Malloy says the public-private investments will stabilize 75,000 jobs at UTC and its suppliers.

Voters can count on hearing about the UTC deal through the fall, from legislators seeking re-election, as well as the governor at the top of the Democratic ticket. They will hear about an administration that’s reached out to 1,600 companies, an effort to recover from 20 years of no net job growth.

“We did what we had to do, and now we have to do other things. And what Connecticut’s future should be about is growing the economy. This is what our budget does — it grows the economy,” Malloy said.

Senate Minority Leader John P. McKinney, R-Fairfield, one of six Republicans running for governor, said Malloy delivered a campaign speech, not a budget briefing. It will not be clear for a day or more, he said, exactly how the administration shored up the budget against weakening revenues.

The General Assembly intends to pass the new budget Saturday. 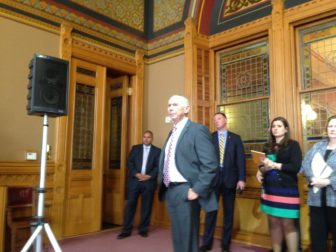 “I think what we witnessed today was how do I get to November without the people of Connecticut knowing what’s really going on,” McKinney said. “That’s what this budget is really about.”

Malloy glossed over a projected shortfall of $1.3 billion that the legislature’s Office of Fiscal Analysis says will confront the next governor. With some justification, Malloy argued that the number was inflated by unrealistic assumptions of spending growth. But he declined to say what he considered the real number. He promised economic growth, controlled spending – and no new taxes.

“Let me be very truthful: I don’t care what that number is,” Malloy said of the shortfall projections.

“It was on point and on message,” Aresimowicz said. “We forget sometimes we need to connect the policies we do here to people on the street. He did that.”

Campaigns are a series of small moments. Over the next five days, Democrats and Republicans will fight to set a narrative about what the budget signifies about the state’s economic health and each party’s vision for the fall election and beyond.

Democrats will nominate Malloy by acclamation in two weeks, on May 16. Republicans will try to narrow their field at a convention the next day. The struggle to control the narrative about the budget, about the economy and about who is best qualified to move the state forward has far to go.

On Friday, Aresimowicz was happy to see the candidate at the top of the Democratic ticket on message, on point and on his game.