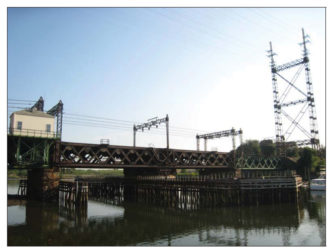 The Walk Railroad Bridge over the Norwalk River.

Gov. Dannel Malloy on Thursday released a $3 million plan to make emergency repairs on the crippled Walk Railroad Bridge over the Norwalk River.

The emergency measures will allow the span to open and close automatically, allow marine traffic to flow past the bridge again, then close to allow Metro-North trains to cross the river on the New Haven line.

After it was stuck in an open position on May 29, then again on June 6, the Coast Guard called the 118-year old bridge “inoperable” and ordered it closed until it could be repaired. It is now opened and closed once a day manually, when necessary, for marine traffic.

The plan released on Thursday calls for six to nine months of repairs at a cost of $3 million that would be raised through state bonds.

After the bridge breakdowns snarled traffic, Malloy held a “crisis summit” with Metro-North officials and established a “short term action team” (STAT) charged with determining the best approach to improve the mechanical reliability of the Walk Bridge. The team consisted of Connecticut Department of Transportation engineers and bridge inspectors, Metro-North engineers, and consultants.

The STAT report makes a series of recommendations to modify the mechanical operations of the bridge. Some can be made over six months, others would take nine months.

The report said the repairs “will improve the operating systems and reliability of the bridge until the bridge can ultimately be replaced. The state funding will pay for work on the devices that lift the rails and re-seat them, and other improvements that will restore the automated operation to the bridge. “

The Malloy administration has applied for about $350 million in federal funds to replace the bridge. Even if the request is granted, replacement of the Walk Bridge would take years.

CTDOT Commissioner James Redeker said immediate fixes to the bridge would include establishing a separate drive system to open and close the movable pieces of rail that lock the bridge into place, installing electronic switches, and implementing repairs to rollers and rods in the center pier on which the bridge pivots.  The new mechanisms will be programmed into the automation of the bridge to reduce the manpower currently needed to open the bridge, Redeker said.