Malloy on rail vs. highway expansion: ‘All of the above’ 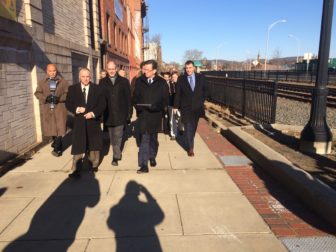 Meriden – Gov. Dannel P. Malloy said Thursday his new transportation vision includes the widening of I-95 from New York to Rhode Island, a colossal undertaking that he insists can co-exist with his commitment to the continued expansion of mass transit.

Malloy, who gave the final approval for a bus-rapid transit system in the Hartford region and the expansion of rail service from Springfield through New Haven in his first term, said the vision he outlined Wednesday after his second inaugural does not represent a retreat on rail.

“Let me put it this way: It’s all of the above,” Malloy said in the first press conference after opening his second-term with a major address on transportation. “Because our problem is so large that no one part of the transportation plan will solve it. All we’ll be doing is putting Band-Aids on a gigantic problem.”

But not everything can be done at once, and Malloy still is weeks away from indentifying specific projects, offering budget estimates and proposing new revenue stream to pay debt service on what is certain to be massive new transportation bonding.

Malloy is engaged in a campaign, with the first phase to acclimate legislators and taxpayers to what is likely to be framed as a once-in-a-generation undertaking with implications for the economies of Connecticut and the northeast, since the state is now a chokepoint in the regional rail and highway systems.

The first legislation he intends to propose will be how to construct a “lockbox,” a mechanism for guaranteeing that new transportation revenue will be forever tied to transportation spending.

The governor sought Thursday to minimize any tension between investing in mass transit versus highways, though he conceded that in the broadest sense he is embracing a new era of highway construction.

“Of course it does in one sense, but not in another,” Malloy said. The governor said he is talking about widening the state’s approach to transportation investment, not redirecting it.

Gov. Dannel P. Malloy and Rep. Buddy Altobello looking out on the site of a Meriden rail, park and flood-control project.

The state Department of Transportation briefed Fairfield County officials last summer on the concept of adding two toll lanes within the existing right-of-way of I-95, which would require the elimination of one breakdown lane. Officials from Miami, Los Angeles, San Diego and other cities shared their experiences with side-by-side toll roads and freeways.

Mass-transit advocates are not necessarily opposed to the highway widening, especially if the capacity of the New Haven line into New York is expanded first in anticipation of highway commuters switching to rail to avoid construction disruptions on I-95.

“That would be a huge construction project. You’ve got to have a robust mass transit system, so the investment in rail has got to happen,” said Joe McGee, the vice president of the Business Council of Fairfield County, which has been pressing major rail improvements.

The ambition has to be to remove choke points, not merely bring the New Haven line to a state of good repair, McGee said.

Beginning in late 2016, the state is planning to run 11 commuter rail trips from Springfield through Hartford to New Haven on improved tracks that can allow speeds exceeding 100 miles per hour. South and west of New Haven, however, speed limits are closer to 50 miles per hour.

Jim Cameron, the founder the Commuter Action Group, which represents Metro-North commuters, said he is not worried that Malloy is about to abandon rail for highways.

Malloy is scheduled to meet Monday with mass-transit advocates.

The governor noted that his first press conference about his transportation plans was in Meriden, where a new downtown rail station is being constructed in anticipation of the expanded commuter service from Springfield to Hartford to New Haven.

Malloy said he hopes the 11 new daily trains running through Meriden are only a start. “That doesn’t have to be the limit. What we want to do is see more and more people using this commuter line in the years to come,” he said.

James P. Redeker, the state transportation commissioner, conceded after Malloy’s press conference that not every project can be tackled at once, but he said the governor truly is talking about a long-term plan.

“He never said it was going be done next year,” Redeker said. “He said, ‘Twenty, thirty years’.”