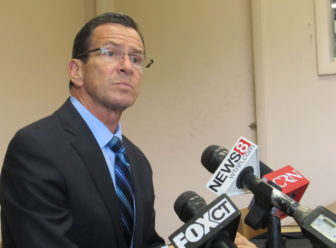 Eroding tax receipts and other revenues – first outlined in a report last week – added $39 million to a deficit that stood at $32 million on Jan. 1.

But the governor’s budget agency, the Office of Policy and Management, also disclosed Tuesday in its monthly budget report to the comptroller that “deficiencies” — likely cost overruns in various agencies — have grown by another $50 million. And most overspending, by far, involves Medicaid.

And while the shortfall still represents less than 1 percent of this year’s $17.5 billion general fund, it has drawn significantly closer to the 1 percent threshold that would force Malloy to craft a deficit-mitigation plan.

Though a deficit equal to 1 percent of the general fund — about $175 million — might appear small relative to the overall budget, much of state financing is restricted by contracts and other legal requirements, making it hard to reduce spending quickly.

For that reason, state law mandates a deficit-mitigation plan whenever the 1 percent mark is topped.

“We will announce additional rescissions (emergency cuts) in the very near future and additional actions may be required to address the projected change in operating balance,” OPM Secretary Benjamin Barnes wrote in his monthly report to Comptroller Kevin P. Lembo.

Existing law gives the state’s chief executive discretion to reduce most accounts unilaterally by up to 5 percent whenever “the governor determines that due to a change in circumstances since the budget was adopted certain reductions should be made.”

Municipal aid cannot be reduced, though, without legislative approval.

And other spending areas, such as debt payments and unionized employees’ salaries and benefits, effectively are excluded from deep rescissions because of contractual obligations.

Connecticut does have $519 million in its emergency reserve, commonly known as its Rainy Day Fund. Malloy and the legislature have been hoping, though, to avoid tapping those dollars.

That’s because nonpartisan analysts still are projecting a much larger deficit, more than $1.3 billion, built into the next fiscal year, and a $1.4 billion shortfall in 2016-17 finances.

The governor must propose a budget to solve those deficits on Feb. 18.

The budget – and the deficit in particular — have been on a fiscal roller coaster since shortly after Malloy won re-election to a second term in early November.

Days after the election, the administration acknowledged finances were just shy of $100 million in the red. In response, most vacant positions in the executive branch were frozen and a first round of emergency cuts were ordered.

That reduced the deficit below $50 million, according to the comptroller’s office. Further spending efficiencies lowered the shortfall by Jan. 1 to $32 million.