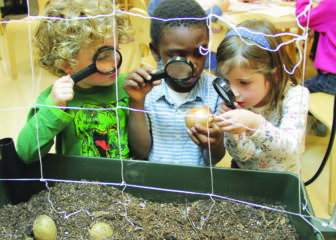 Faced with deficits and stagnant per-student funding from the state, magnet school leaders have been forced to turn to local districts to fill the shortfall.

Five years ago, tuition paid by local school districts covered 27 percent of the operating costs of magnet schools in the Hartford region. Today, that tuition makes up 30 percent as state support for each child enrolled has not changed. This offset has cost Hartford-area school districts an additional $2.9 million in tuition, magnet school officials report.

“Right now, it’s pitting the school districts and the [regional magnet schools] against one another with regard to these tuitions, and that has got to stop,” said Bruce Douglas, the executive director of the Capitol Region Education Council, which runs 19 magnet schools.

A similar situation is playing out in the magnet schools that enroll students from the Norwich, New London and Groton areas.

Since many of the 11,300 students enrolled in these regional magnet schools come from the state’s poorest and lowest-achieving school districts, magnet school leaders are hesitant to boost tuition further on districts already struggling financially.

“I can’t continue to turn to tuition just to meet my district’s basic needs,” said Eileen Howley, the executive director of LEARN, which runs five magnet schools in Southeast Connecticut.

When a student leaves their neighborhood school to attend a magnet, the local district still gets to keep the funding they receive for that student from the state. That state funding is typically much larger than the tuition magnet schools charge.

To provide a remedy, magnet officials and students were at the state Capitol complex Tuesday to ask legislators to boost state support by $1,000 for each student enrolled in their schools – a move that would cost the state nearly $11.3 million in the fiscal year that begins July 1.

They also want the state to create a funding formula similar to one that funds traditional public schools to hopefully prevent their schools from going another five years without an increase.

State funding for traditional public schools is directed to municipalities with less ability to raise revenue locally, high concentrations of poverty and a higher number of high-need students that typically cost more to educate. This year, districts are set to get $150 million more than they were five years ago — a 1.6 percent increase each year, on average. 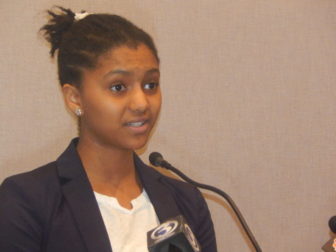 “Why hasn’t our state taken action and funded my school?” asked Mia Flowers, who attends a magnet school in Hamden.

“Why hasn’t our state taken action and funded my school?” asked Mia Flowers, a student from Hamden who attends Wintergreen Interdistrict Magnet School. “We need funding to support our students to be innovators, problem solvers, peace makers and leaders.”

The CREC magnet school system is facing a $5.2 million deficit for the upcoming school year – a 3.8 percent structural deficit – and needs help from the state, said Douglas.

“It’s time for the state of Connecticut to get its act together,” he said.

But Gov. Dannel P. Malloy’s administration has struggled with deficits for much of the past four years as the state’s economy recovered slowly from The Great Recession.

And the legislature’s nonpartisan Office of Fiscal Analysis is projecting major deficits built into each of the next two fiscal years, topping $1.3 billion in 2015-16 and $1.4 billion in 2016-17.

State funding for the Hartford-area regional magnets has lingered at $10,443 for each student enrolled for the last five school years. During that time, CREC raised tuition charged to local districts three times and the average tuition rate is now $4,407 for each student.

For regional magnet schools located outside the Hartford-region, state funding has not changed for the last three years.

Magnet schools have been the state’s main approach to complying with the Connecticut Supreme Court 1996 order that the state desegregate Hartford’s schools. As a result, enrollment in these regional schools that draw suburban and urban students has continually increased and state funding has followed. The state is set to spend $134.2 million more for the enrollment increases this school year than it did five years ago  — a 16.8 percent increase, on average, each year.

That increase, allowing more magnet schools to open or increase enrollment, has unsettled some state legislators, including the House chairman of the legislature’s Education Committee.

“Those are dollars that go into magnets that continue to not go into neighborhood schools. I continue to be skeptical of building new magnet schools,” state Rep. Andy Fleischmann, D-West Hartford, said during a recent interview.